Rolled/crimped rye facilitates planting through the mat and allows the pumpkins to sprout.  A heavier seeding of rye (2 to 2.5 bu/acre) may in a normal rainfall crop year be more help in slowing the weed onset to allow for a pumpkin canopy to cover quickly. A planter with no till capabilities can direct seed placement correctly for rapid emergence.

Finding that the planter can readily plant in the same direction as the rolling, a few areas were planted across the rolled rye with just as good success.  Rolling crossways to the rye planting seemed to give more soil surface area coverage.

Excessive rainfall caused a pumpkin crop failure. Prior to the heavy rains the no till pumpkin process was working very well.

The heavy rye mat also reduced erosion to almost none which is a plus for erosion control.

The rye had bloomed and was tractor hood height when the 20 acres was roller/crimped and planted. The 5 acres test plot was planted and then roller/crimped. There was some difficulty in planting into the standing rye with wrapping on the planter parts. Seed to ground contact was excellent in both methods of planting. The 5 acre plot had oats drilled in the rye in the early spring, however the rye was well established and quickly outgrew the oats, shading them to the point that at rye bloom there were no oats growing in the plot.

Prior to the pumpkin planting and throughout the pumpkin growing season we received nearly twice the normal amount of rainfall. With the heavy mat of rolled rye and the more than normal amount of rain; the ground did not dry to a suitable moisture content for the pumpkins to flourish. Pumpkins prefer drier soils rather than wetter soils. With the wet soils the pumpkins were stunted and did not canopy which allowed the weeds(foxtail) to grow and continue to shade the ground(preventing dry down) and shaded the stunted pumpkins.

The objective of no-till pumpkins was NOT achieved due mainly to the excessive amounts of rain from March through June. The secondary problem weeds taking over was evident also. A nearby field of normal till pumpkins had a reduced yield but was able to dry out enough to produce a smaller crop of pumpkins. The no till planting into a roller/crimped field of rye worked very well and emergence of the pumpkins was very adequate. 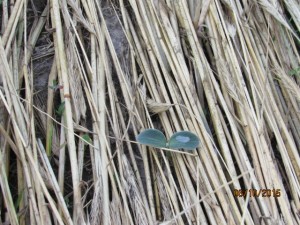 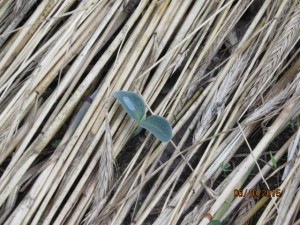 Pumpkins sprouting through the rolled rye.  Rolling the rye after bloom assures the rye will not regrow. 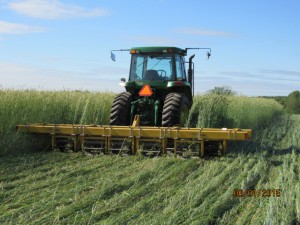 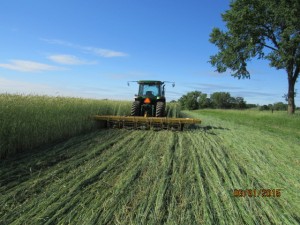 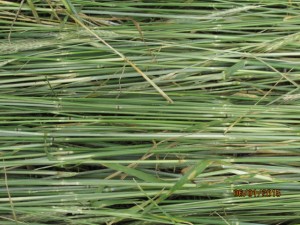 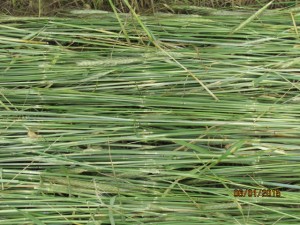 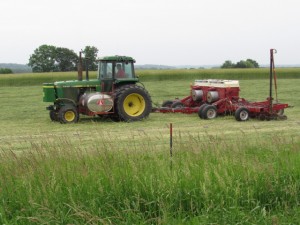 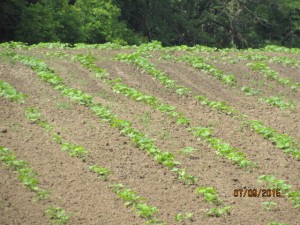 This is a picture of a conventional till pumpkin which received the same rainfall, but dried out enough to allow the pumpkins to produce.

Seneca Foods made the decision to terminate the field of pumpkins due to the stunted pumpkin plants and the excessive soil moisture which was not going to allow the production of pumpkins. The fact that the rolled rye mat held the rainfall and did not allow the soil to dry out could be information that would indicate that the rolled rye used in a dry or drought year could assist the pumpkin plants to produce a larger production. 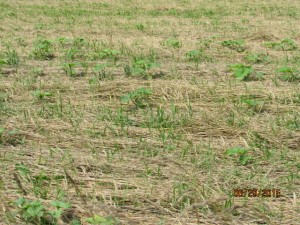 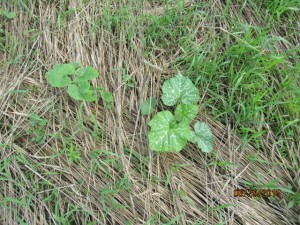 Pumpkins sprouted and grew to this stage and stagnated,  weeds continued and shaded them out. 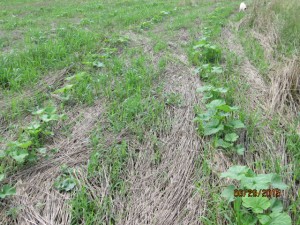 Rye can be rolled/crimped and pumpkins can be planted into the rye mat and successfully sprout through the mat.

In a dry year a rolled rye mat could hold moisture for the pumpkins to use during a drought.

I have given 4 talks @ local organic meetings. Discussing the differences of conventional till and no till pumpkins production. Other local pumpkin growers also shared some of the same problems with excessively wet soil conditions and some complete pumpkin crop failures with conventional till growing conditions.

It was a learning experience with the roller/crimper and the blooming rye , but the outcome of the rolling and planting into rye was very productive and that part of the pumpkin production was a very helpful learning process. The abundant rainfall caused the pumpkin crop failure. Within a 20 mile radius a number of conventional tilled pumpkin fields had the seeds and sprouted pumpkin plants die in the field due to too much moisture and some of the replanted pumpkins also died due to excessive moisture. Seneca Foods has allowed an additional 5 acre test plot of no till pumpkins in rolled rye in the 2016 crop year to again test the possibility of no till pumpkins in a hopefully 'normal' moisture crop year.

I will try a 5 acre patch of no till pumpkins in 2016.  All the processes used in this experiment worked well but could not overcome the excessive moisture.

As with most farming processes------They all don't work , EVERY YEAR.