Using a replicated trial format the stakeholders compared the effectiveness of individual and combined methods of controlling invasive species in timber by using goat browsing and prescribed burning protocol. The project determined a multi-year and combined controlled methods will achieve a higher level of long-term effectiveness of invasive species in timber stands. However, even combined approaches of control will require a multi-year strategy to achieve desirable levels of control.

The project incorporated the USDA approved methods of goat browsing and prescribed burns to maximize control of invasive species and invigorate native savanna re-growth in multi-use timber stands. An on-farm research/demonstration plot was established for comparing the effectiveness of individual and combined control methods for invasive species in timber.

The project had 2 primary areas of targeted focus:

The landowner and project team identified 12 acres within the existing timber stand that was conducive to setting up replicated trial plots to compare USDA-NRCS EQIP approved methods for controlling invasive species. Due to the topography of the ground the team divided the area into 6 plot areas with consideration given to:

The plots were then assigned for one of the following control methods.

Adjacent areas within the existing property served as the “control” for baseline data for no-burn and no-goats treatments. 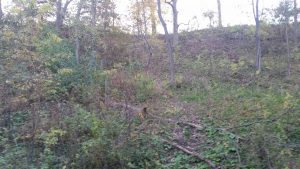 Goats clearly have potential to be an effective ecological management tool with two aspects. One to replaces historical disturbance regimes of fire and native Fauna browsing by creating their own browsing regime. By eating woody species they can maintain an open savanna biome allowing light to enter the ground level favoring herbaceous species which are a necessity for holding soil in place. They also can be used to fight back invasive woody species in our ecosystems.

In the fall of 2015 a timber burn was attempted however the density of the invasive species resulted in minimal ground cover to sustain a quality fire over the entire plot areas.

During the following summer (2016) data surveys  continued to determine woody plant kill and species richness of the herbaceous layer. (Data sets attached)  Impact of the defoliation and death of the invasive species by the goats and the fire was still visibly noticeable the following year. (see photo)

The project and data collection allowed the team to make several conclusions:

The repeated goat browsing did result in significant defoliation and death of the targeted invasive species.

The defoliation and set-back of the invasive species was significant enough to allow for a realistic change of future management by fire, mechanical and chemical control.

The use of fire as a combined method of control needs to be done before ground cover is shaded out or in years 2-5 following heavy goat browsing; not in the same year.

The project and results resulted in:

Defoliation and set back of large bush honeysuckle plants and larger multi-flora rose will provide a land-owner a window of opportunity to mechanically and/or chemically regain control where plant density is overwhelming.

The project confirms the effectiveness of goat browsing as a method of control for invasive species. However; due to the hardy nature of the invasive plants an aggressive management plan for years 2-5 must be implemented to combine, repeated fire, and mechanical or chemical control must be used to compliment the impact of the browsing. The browsing is highly effective emergency recovery practice creating a window of opportunity to regain control of the invasive plants.

The project team is continuing to refine the data and has enlisted the help of the Iowa State University Statistic Department to refine the huge data sample set into more usable visual and statistical data sets.

This data will be used to solicit additional research funding to continue to monitor the long term impacts of the project. It is anticipated that the regrowth of native savanna plants may take additional time to reach noticeable levels.