Background:    During the 2015 growing season, the Cicero Farm Market Garden lost all their outside in-ground tomato plants due to excessive rain that drowned most of the outdoor plants.  The excess water even invaded the sides of the high tunnel and adversely affected many plants in there as well.

Because of this effect from excessive spring rain, I (Ron) began to search for a potential solution, concentrating on alternative growing methods for tomato plants that would avoid the drowning problem and could potentially extend the growing season by proper utilization of the available unheated hoop house/high tunnel.

Starting in the fall of 2015, I rescued discarded mature tomato plants for the high tunnel that had withered and not produced many tomatoes.  I put them in a Walmart cloth blue shopping bag with Miracle Grow potting mix and placed them on my back patio in full sun.  Plants began to thrive.  I then made cuttings from mature plants at the garden and rooted them in the fogger bucket.  Roots showed after 8 to 10 days, enough to plant them in grow bags.  When the weather turned too cold to keep them outside, I brought them inside and kept them growing through January.

Starting in March 2016, I (Ron) planted 15 tomato seedlings that Duane and Karen had started from seed in their basement – started out about 3” to 4” tall and slightly on the yellowish side since the seedlings had not received added nutrients.  Also potted 3 cabbages in grow bags in larger round totes.

The tomato seedlings were potted in the cloth blue Walmart shopping bags with plastic laundry totes from Dollar Tree store, utilizing an organic 50/50 mix of potting soil/compost.  The plants were transferred to the Cicero Garden high tunnel in early March, and covered with a commercially available white foam blanket during the several hard frosts that occurred during March through May.  The plants grew well and began to flower extensively.  I watered daily from the top of the bags.  Also began to monitor the temperature with a digital thermometer that recorded the high and low each 24 hr period.

Several weeks later I added a dozen additional tomato plants from Walmart and Lowes, also put up in the same grow bags/totes and used Miracle Grow potting mix, and added plastic bins to hold water so they could be filled with water daily.

All the plants grew, but the second set in the Miracle Grow potting mix looked greener and healthier then the first set.  Added minerals to all plants – magnesium as Epsom salt, calcium nitrate, potassium sulfate and organic fertilizer.

Tomatoes began to grow and the first fruits were harvested in the first week of June from the largest starter plant from Lowes.  All plants had green tomatoes popping out.  However, the temperature inside the hoop house began to rise during the day to over 100 degrees, topping out at 122 degrees.

Duane opened up the sides and ends for more air circulation, which kept the day temperature on sunny days to 95 – 100 degrees.  However, the number of tomato flowers dwindled and many dried up from the constant high temperatures.  Also the water supply at the garden proved to be unreliable due to the added drip lines for field planting, so the project was suspended in the high tunnel until more water lines were put in.  Note: More water lines were installed in late fall/early winter 2016.

So in early June I (Ron) transferred 8 of the second string of tomato plants to my backyard where I could water them on a daily basis, leaving them in the grow bags/plastic bins.  I watered them at least daily by filling the plastic bins.  They continued to supply ripe tomatoes on a daily basis until frost.

On January 16, 2017, tomatoes plants were started by seed in the basement of Duane and Karen Carlisle.  These new tomato plants will be the parents from which our cuttings will be taken during the 2017 growing season.

A.     The grow bag approach allows early season plant growth in an unheated hoop house and allows maximum flexibility for movement of the plants as needed to optimize growth conditions. The use of plastic bins underneath optimizes watering to the plants' needs – the plants uptake the water at different rates as their individual growth requires, and will allow development of an automatic watering system utilizing a reservoir/float value control for each plant

B.     The early start of the grow season in the hoop house worked fine, but the rapid rise of the internal temperature on sunny days requires more air circulation to prevent flower damage and stunting of the plants. This was probably the cause of poor tomato yield last year in the hoop house and proves the need to monitor temperature extremes - high and low - on a daily basis

D.     Additional plant nutrients/minerals need to be added on a regular schedule to optimize plant growth and maximize yield.

E.      The grow bag approach with fogger rooting of cuttings should allow the tomato season to be extended well into the late fall/early winter in the unheated hoop house.

I, Karen, worked on our project for the 2017 gardening season. As earlier mentioned, we started our new parent tomatoes from seed on Jan. 16, 2017.  In mid March, Ron, Duane and I transplanted them into the grow bags which had the same soil as the high tunnel.  The bags were then transported to the small heated hot house where the tomatoes continued to grow and thrive.  A small automatic heater kept the night time temps above 45 degrees.  Early April the heater went out and all the tomatoes in the grow bags froze.

Fortunately, we had started plenty of seeds and were able to transplant again into the grow bags.

Mid April the grow bags were transported into the larger 50’ by 100’ high tunnel. This high tunnel had better air circulation than the one we used in 2016.

Again we used both a drip line watering system as well as the underneath plastic bins both outside and in the high tunnel.

Even with losing the first grow bag plantings, tomatoes were harvested five weeks earlier than the open field tomatoes.

In late June we started taking cuttings from our parent grow bag tomatoes.  Three weeks later we transplanted large well-rooted offspring into the high tunnel and they produced medium size ripe tomatoes in less than 6 weeks.   This process was repeated again in late July and these tomatoes continued producing until frost.

Our objective in this project was to find a way to extend the growing season and avoid the uncertainty of the weather conditions primarily for tomatoes.  We experimented with a fogger/ misting system which allowed us to take  cuttings from mature tomatoes plants, place them in  the misting bucket until roots developed  and then transplanted into cloth grow bags.

Click here to view a larger version of these slides. 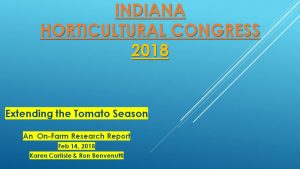 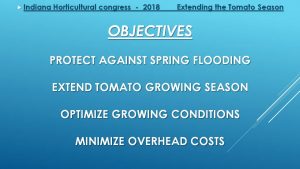 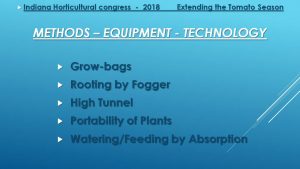 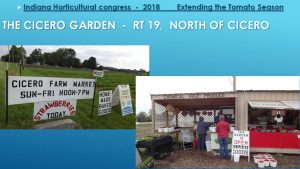 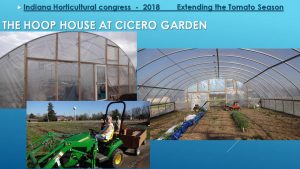 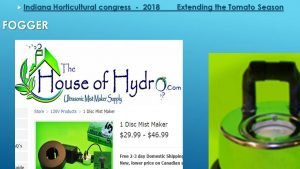 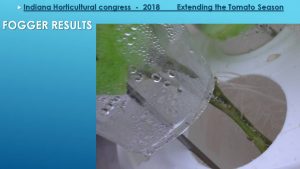 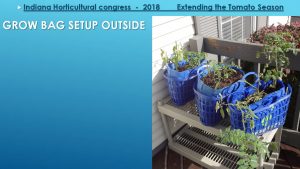 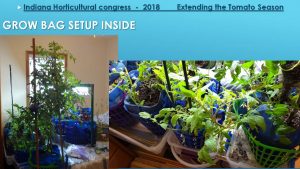 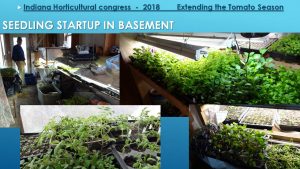 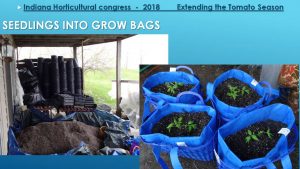 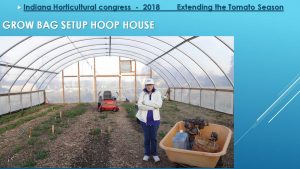 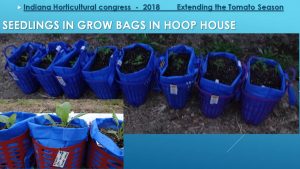 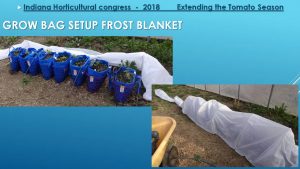 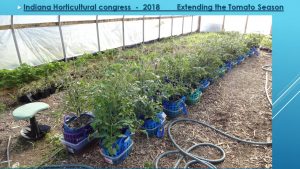 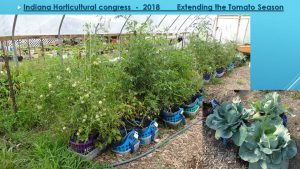 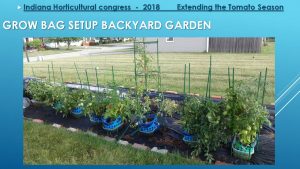 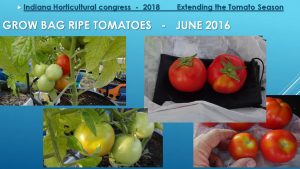 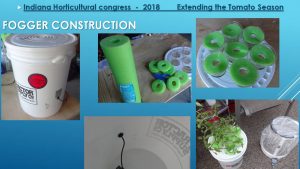 Instructions for making the misting bucket:   The top of the 5 gallon food grade bucket was drilled with a bunch of holes large enough to fit tapered soft clear plastic cups with their bottoms cut out.  The plastic cups acted as holders of the tomato plant stems via the sponge collars cut from a swim noodle that already had a center hole big enough to restrain a tomato plant cutting without damaging it.  This allows the bottom of the plant stem to protrude down far enough into the 5 gal bucket to be bathed in the "fog" that accelerated root growth.  The fogger unit was purchased at The House of Hydro.com

I believe this method could be expanded even more. If a cutting was taken from a parent tomato plant just prior to frost, rooted, planted in a grow bag and kept in a warm place, either in a heated greenhouse or in a  basement under lights,  this would become the new parent plant  from which many cuttings could be taken.  It’s very conceivable that tomato plants could be ready to bloom at the time they are placed in the high tunnel, thus resulting in an even earlier harvest.