It's part of a 120 acre farm. I have 30 herefords and am expecting 14 babies in the spring. Currently 27 acres are being rotationally grazed and the rest was in a Wisconsin DNR forest program, managed forest law.

I would like to expand to a larger herd and utilize more of the acreage. There is a small patch of pines next to my house that I seeded and fenced in last year which seems to be doing well and it gives the animals some shade in the summer so I thought why not try to expand. The acreage I'm currently looking at is about 22 acres of previously conventionally farmed land that was planted into 75% spruce and 25% white pine 25 years ago and put in MFL.

These trees were planted in rows about 8 feet apart both ways, and will come out of MFL on January 1, 2017. Lime was already applied at a rate of 3-1/2 tons per acre in the fall of 2016. Two rows will be cut down and every third row will remain standing all across the plantation. The bad or weakest trees will be cut from the remaining
rows ultimately leaving about 30% of the trees standing. Any more than minimal brush left behind will be removed.

As the owner and operator of this farm, I have worked closely with the NRCS in implementing a good rotational grazing plan and controlling weeds and invasives as well as maintaining water quality and quantity all while producing top quality grass fed beef that I direct market.

Problem
I would like to convert 22 acres of spruce and white pine into silvopasture. I can find very little information on doing so in my climate or soil type. I know from talking with other grazers in the area that there is interest in doing this but this poses several problems. First of all what can I get to grow in the mat of pine and spruce needles?

Secondly, how do I incorporate the seed into the ground with tree stumps every eight feet and other woody debris on the ground? In looking at other funded SARE grants on Silvopasture, none are of much help for what I'm trying to accomplish.

The following are the grants that I was able to find information on but they don't address my situation.
1. ONE-13-189 Advancing on farm understanding and applications of silvopasture technologies in Pennsylvania
2. ONC16-017 Evaluating and showing techniques in silvopasture establishment.
3. FS05-191 Silvopastures for forage, cattle and trees

Solution
I would like to determine if a spruce/white pine plantation located in my climate can be a viable option for anyone looking to expand their grazing operation. Furthermore, I would like to show that seeding can be effectively done by broadcasting on top of the ground and then allowing cows to trample the seed into the ground by feeding baled hay on top of a relatively small area at a time. I am choosing this method because the tree stumps are not going to be removed to avoid any unnecessary soil disturbance and no fertilizer will be added.

The trees will be cut and removed early in 2017.

Four test plots will be made.

Plot 1 will be seeded with Meadow Fescue, Festulolium, Cyclone Red Clover, Kentaur Perennial Ryegrass,
Vigilant White clover and oats as a nurse crop. Cows will be allowed on to trample the seed.

Plot 2 will be seeded the same as plot 1 but without oats for a nurse crop and cows will be allowed on to trample
the seed. Cows will be rotated through a small section at a time 1-2 days after seeding and allowed on for 24
hours and will be fed hay.

Plot 3 will be seeded the same as plot 1 but cows will not be allowed on.

Plot 4 - Nothing will be seeded to this plot and cows will not be allowed on. This will be the control plot just to see
what will come up on it's own through the pine/spruce needles.

Measuring Results
As the Project Coordinator, I will check the pasture density or dry matter per acre and photograph in the spring, summer and fall of 2017 and 2018 as well as the spring of 2019. This test will be conducted 5 times in each test plot and then averaged. With the assistance of the NRCS, we will be doing a species composition test at the same time to determine what percent of each species that was planted is actually growing within a given area.

This test will also be conducted several times in each test plot and then averaged out. If all goes as planned, the value of the crops produced will far outweigh the cost of the seed, lime, etc. In addition to these, the Haney soil test will also be conducted in late May of 2017 and again in May of 2019. By doing this test we should be able to assess how much the soil health improves.

The cows will benefit greatly from having a diverse forage to eat as well as shade in the heat of summer and shelter during adverse weather conditions. Surely there will be a wildlife benefit because of green forage on the ground instead of pine needles which will also assure that erosion and any water run off will be controlled.

Other farmers will also benefit from what I am able to learn from this project as the data and photos collected will be shared at the pasture walks to be conducted. The information will also be shared with my beef customers.

With the added shade during the grazing season it will be a very pleasant working environment for moving cows daily as opposed to out in an open field. 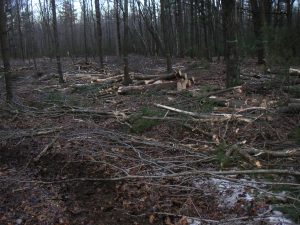 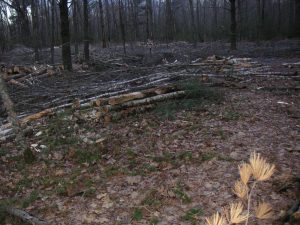 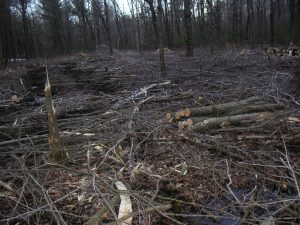 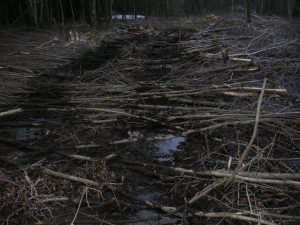 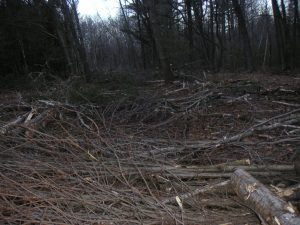 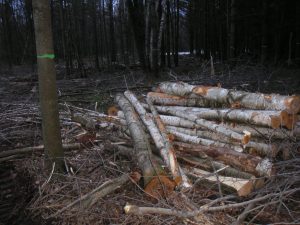 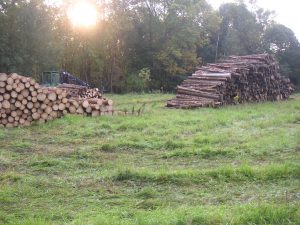 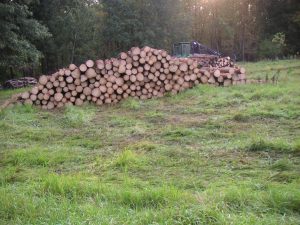 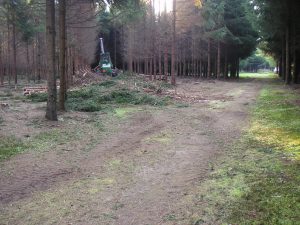 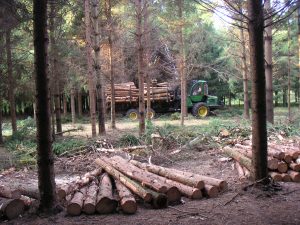 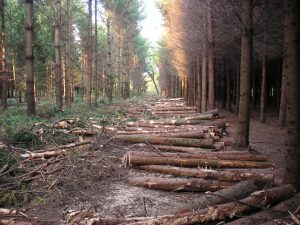 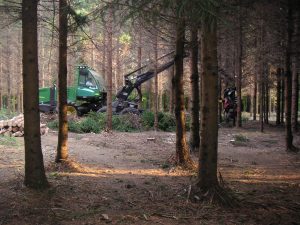 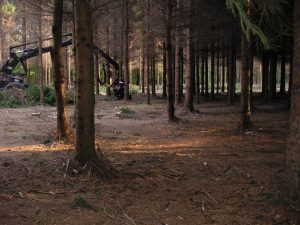 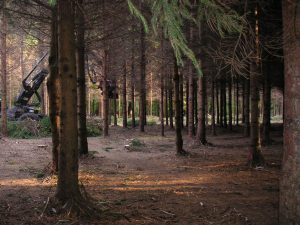 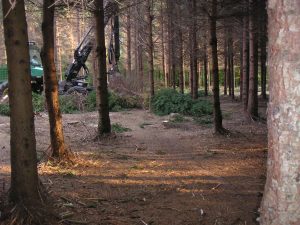 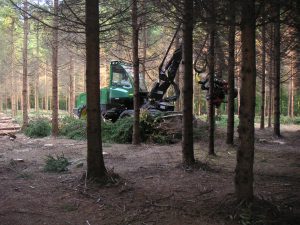 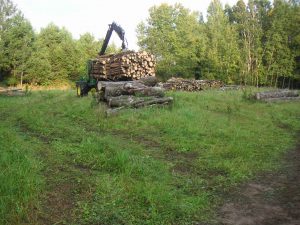 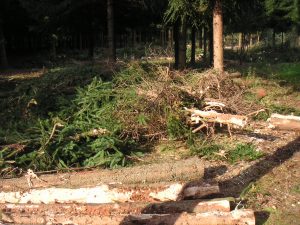 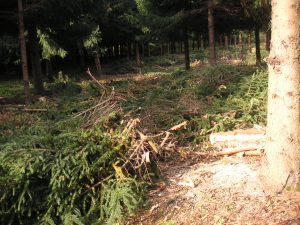 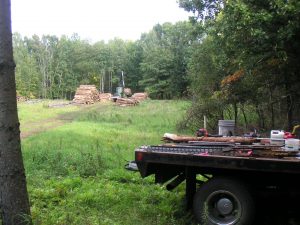 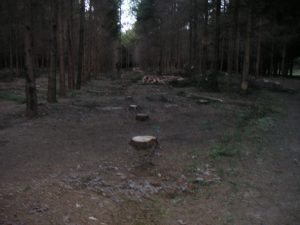 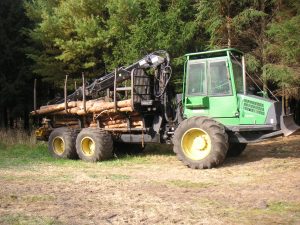 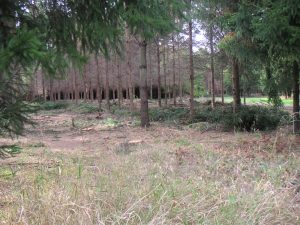 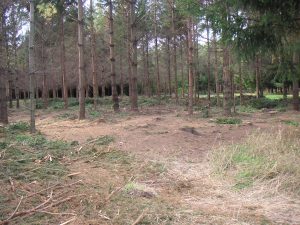 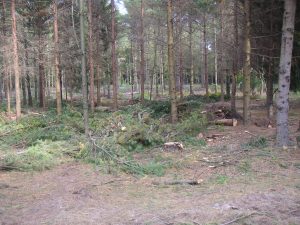 So I had planned on getting started on 5/1/18 but because of a very wet spring I actually got started on 5/26/18. On 5/26/18 I started my rotation of the 15 cows around the 22 acres in the northwest corner and am moving east at 100 ft pr day. the seed was broadcast, temp fence put up and the cows were moved in. there was some foliage to eat so I did not feed any hay. I proceeded to do this for the next 7 days while feeding  from 5 to 9 bales of hay per day and using 15 lbs of seed each day. Note: It was very difficult to seed evenly while going over brush piles and fallen trees. It was at this point that I realized that this was too much area and the seed was not getting trampled in to the ground as it should be so I cut the size down to 75 ft pr day. Also the seed was cut down to 12 lbs per day. This was done for the next 5 days. Then I cut the size down even further to about 60 ft pr day. (As a side note on 6/8/18 I found a turkey nest with 11 eggs in it and was pleasantly surprised to find that the cows left it alone.) This is the size that I used for the rest of the project. On 6/13/18 we reached the east end of the paddock and On 6/14/18 the cows were moved to south side of the dividing fence and started moving west. Everything on this side was done the same way with the exception that oats were also seeded as a nurse crop. On 6/18/18 it rained 3 inches overnight and everything was flooded but at least the cows were being moved up a hill. On 6/19/18 2 steers were sold so now there are only 13 animals. On 6/24/18 and 6/25/18 we were at a very low spot where the reed canary grass is very thick so no seed was used and no hay was fed then it was back to normal on 6/26/18. By 7/1/18 we could see that the first seeded section was starting to green up. On 7/5/18 the cows were at the last section of this paddock. It is now very dry and we need rain. To complete this rotation over 41 days it has taken over 4 hrs per day to get through the 22 acres.  On 8/10/18 I started the 2nd rotation starting at the same point and ending at the same point. This time the cows were given a much bigger section each day and were only fed hay when there was little forage. 28 days later on 9/7/18 we had gotten all the way around and had fed only 19 bales of hay and averaged only 1.4 hrs pr day. Although there was forage growing it was very spotty and not very tall but most of the oats that had been seeded was close to 12 inches tall when the cows got there. On 10/27/18 I started the 3rd rotation again starting and ending at the same points. This time the 22 acres were divided into 6 equal parts and the animals would be let in each part for 2 days. although the forage is very limited 34 animals were used and were also fed 14 bales of hay pr day. This included all moms,yearlings,and babies. It should also be noted that the bales of hay  were being fed only in places where the ground was bare or on top of brush piles. On 11/7/18 the cows were moved out and in that time I had fed 154 small square bales of hay and it had taken 16.5 man hrs.

Since the cold weather ended in early February 2017, the logging did not get completed as planned which then pushed the whole project back one year.  In May of 2017, I marked out 4 test plots and took soil samples and sent them in for analysis.  I then started building fence and installing waterline.  Logging was started in September of 2017 and was completed in October 2017.  I then contacted the business that had planned to come in and remove all the brush, tree tops and debris and was told that there is now no market for bio mass.  I had no choice but to leave it in piles and work around it.

We held a pasture walk on 8/2/18 and had over 40 people in attendance . I explained what I was trying to accomplish with the sare grant  and the methods I was using.

10 Farmers reported changes in knowledge, attitudes, skills and/or awareness as a result of their participation
Lessons Learned:

It was somewhat successful in the first year as the seed did come up and was growing in the high traffic areas as was the oats. I also found it interesting that in the places where I had fed hay in the fall of 2017 that there was grass and clover growing early in the spring. Apparently there was a lot of viable seed in some of the baled hay because there was nothing growing before in the places where I fed the bales to the cows.

I believe that just having cows on that land goes a long way in reducing the acidity from the hoof action on the ground with the urine and manure.

Before I started this project the soil test showed that it needed 8 to 10 tons of lime per acre due to the acidity from the evergreen trees but in some places that were high traffic there was clover coming on strong even though only 3.5 tons of lime pr acre were applied.

There were over 40 people at the pasture walk and I had very in depth conversations with about 10 in regards to their farms and similar situations.

My son moving the cows.

Grass growing where hay was fed.

Grass growing where hay was fed.

You can see the spots that hay was fed.

Grass is growing good in spots.

Clover growing in spots where clover hay was fed.

The clover is thick in some spots.

It is very important to find a good logger !