We've farmed on 84 hilly acres with diverse ecosystems since 2016. We raise pastured heritage breed pigs, plus heritage breed chickens and ducks and aspire to grow a few acres of perennial fruits and nuts. All our livestock is raised to organic standards and we plan to pursue certification this year.

Our farm has a 4.5 acre semi-wooded area between a ridge and property boundary that has been overgrown with invasive species. We had been planning to remove the invasives and establish silvopasture but a week after marking trees for removal, a violent storm uprooted about half the trees for us, accelerating our timeline.

We've been using pigs to clear the invasive species in our woods and seeding pasture in each paddock after they leave. In this project, we're evaluating how well pasture will grow in this semi-wooded environment and how well it will suppress invasive regrowth. We will compare samples in the main pig-disturbed and broadcast-seeded areas with samples from adjacent areas that are undisturbed and left unseeded, undisturbed and overseeded with the same pasture mix, and disturbed but left to regrow from the seed bank. We will also give a cursory evaluation of the time of year best suited for this pig-and-then-pasture disturbance by comparing the next-season pasture quality and invasive species prevalence of paddocks disturbed and seeded at different times of year.

The first year of the project worked as expected, but a repeated injury in spring and summer of the second year made collecting data impossible. An extension has been requested and granted so we can collect data in the third year (two full years after disturbance and seeding).

Our process is essentially to seed disturbed areas, and also to survey plants growing in each area several times a season by photographing quadrat samples in disturbed and undisturbed, seeded and unseeded areas.

The disturbance we're following is twofold: first, a destructive storm uprooted hundreds of trees in the 4.5 acre area in July 2017 (the summer before beginning the project). This decreased canopy cover from about 80-90% to about 60%. The area is primarily early successional plants, including great quantities of a few invasive species (specifically, garlic mustard, honeysuckle, buckthorn, wild cucumber, multiflora rose). We wanted to see if we could limit their proliferation with a second, more thorough, and more even disturbance by swine, followed by overseeding with a pasture mix.

The area we experimented in was divided into sections of approximately .22 acre each, varying because boundaries worked around the varied terrain and brush. The disturbed sections ultimately comprised two strips running east to west on either side of a driveway. We left an undisturbed strip along the north and south sides of each disturbed strip for controls. When seeding, we divided each section in half from north to south, seeding both half the control strips and half the disturbed section in-between. We're still going through seeding records and entering data of what was seeded where and when, so the graphic below is approximate but provides a rough idea of how the sections were arranged (dark shading) and seeded (green shading).

Before seeding, we moved pigs through each section. We learned to put their feed around the base of brush we wanted to remove, so the pigs would root the ground up in those spots until we could easily pull up even large shrubs by their roots. We moved the pigs to the next section when the groundcover was nearly gone and nearly all the targeted brush (honeysuckle and buckthorn) was removed. We began with four pigs weighing around 150 pounds each in the southeastern-most section, and one pregnant sow in the northwestern-most section. After about a month, they moved west to the largest section, at which point three of the pigs were harvested and the sow and a gilt remained for a December farrowing. Eleven new piglets overwintered in a stick and straw shelter (yes, I know there's a story about that, but the big bad wolf didn't bother these little piggies) and were introduced to new pasture and split in to separate male/female herds in May. So for the western half of the above map, the seven young males moved along the north sections and the four young females plus the adult gilt and the sow moved across the southern sections. They moved about every 3 weeks until late September, when they were either harvested or moved out of the test area.

After each section of our site was disturbed, we seeded an organic pasture blend formulated as forage for swine. The blend was chosen based on Wisconsin's NRCS Conservation Practice Standard for Forage and Biomass Planting's Pasture for Hogs, limited by what organic seed was readily available. We landed on a mix of red clover, alfalfa, forage turnip, millet, sweet clover, alsike clover, buckwheat, and rye. At the time each area was seeded, only seed varieties within their planting window were broadcast, and other seeds were broadcast across previously seeded areas as their planting windows arrived, until each area was seeded by each seed variety once. Planting windows and seeding density were determined using the Midwest Cover Crops Field Guide, Second Edition, published by the Midwest Cover Crops Council and the Purdue Crop Diagnostic Training and Research Center.

The idea of using a quadrat was suggested by Dylan Bruce, who I worked with to write another grant application that was not funded. He has much more experience in experimental design and I'm glad to have learned so much from him while working together. I made approximately 1-square-foot circular quadrats using PEX tubing and joints. When sampling, I walked a curving path through the area, tossing the hoop to make my selection more random. Then I photogaphed the quadrat, sometimes twice if I needed to capture a tall overstory and then the understory (see below). 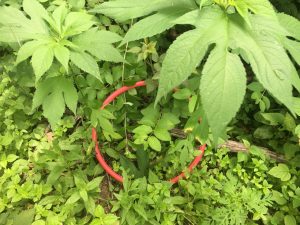 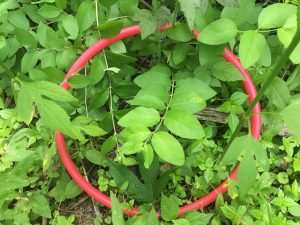 My data shows that the percentage of plants that are considered invasive was lower in the areas disturbed by pigs than in the undisturbed areas, and that the percent of invasive species increased in all areas between 2018 and 2020, when there was no further management. 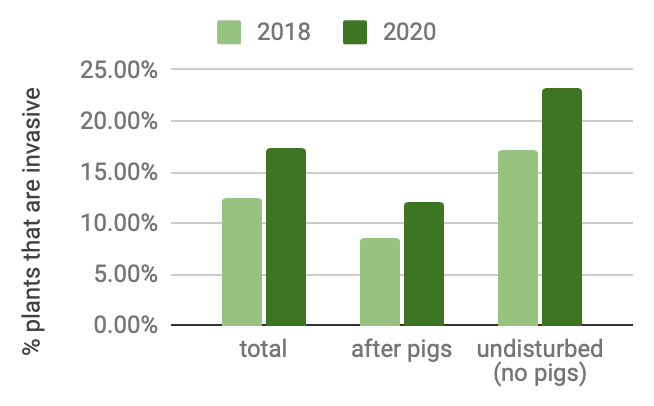 Counts of individual species varied, as shown in the chart.

The seeding status was not clearly identified in all of my photos, so my data on seeding is incomplete and I can't draw any conclusions. However, I now know to make sure that all variables are clear in every photo instead of relying on organization or memory to track them.

We hosted Wisconsin's SARE coordinator for a tour of this project and another.

We had planned to participate in a multi-farm field day, but planning of that event fell through.

We also hosted a local permaculturist and a group of students for a tour and demonstration of our research design and seeding.

We presented a summary of our two SARE grant projects at the Savanna Institute's Perennial Farmer Gathering.

We consulted with our NRCS agent.

The main take-away I have from this project is that disturbance can reduce the percent of invasive species in an area, though that percent will likely increase each year if left unmanaged. The bit of seeding data I got seemed to indicate that pasture seeding did help suppress invasive species, though the data is very tenuous.

Most of my learning was tangential to the point of the project. I learned how to use a quadrat and to take plant data with photos. I learned to identify many plants I hadn't previously noticed. I learned that I shouldn't rely on everything working as planned, as unplanned issues caused a one-year delay in data collection as well as a loss of seeding data.