Moss Funnel Farms (Joe's Blues) grows blueberries using organic practices on its 10-acre farm in Bangor, Michigan. 2018 marks the tenth year the farm has been operating. The farms also serves as a food hub for other small organic methods growers in the area and markets fresh and frozen blueberries plus a number of value added products under the Joe's Blues label. The farm is Michigan Agriculture Environmental Assurance Program (MAEAP) environmentally certified and has participated in Food Safety Modernization Act training.

While there has been much media coverage in the last few years about massive die-offs in pollinator populations and the threat this poses to agriculture, the need to demonstrate the importance of pollinators to the food supply to the public has been spotty and mostly limited to broad and superficial coverage.

The purpose of this SARE education/demonstration project is to provide an on-farm educational experience that graphically shows local residents and summer visitors to Michigan’s fruit belt the ecology of pollinators in a commercial blueberry habitat.

A pollinator education trail will be designed and constructed in a wildflower field adjacent to a producing blueberry field. The field and trail will also include hands-on activities for kids, and two special 2018 field days for educators. Measureable results will provide a basis for measuring the effectiveness of this approach.

Our program objectives include 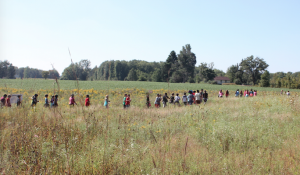 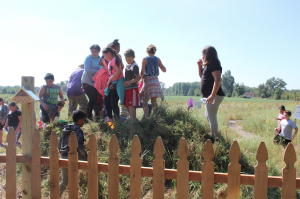 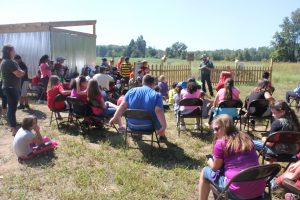 While our approach to this project has been validated and the project has achieved its objectives, we faced significant problems along the way. We  feel, however, that we have overcome them.

Problem 1 - Weather. Our timeline was ambitious, but we felt, achievable.  We already had a site, a second year wildflower field, and knew what we need to do - build a trail and shelter, and develop and install educational signage.

The weather did not cooperate. We had a very cold spring, followed by periods of intense heat and high rainfall during May and June. We were able to layout and build the trail in this period. However, we had to endure intense heat during construction of the shelter and that slowed our progress.

Also, we came to realize that it makes more sense to begin such a project after the growing season, when the harvest is in. The weather challenges put extra burden on our blueberry farming and made it very difficult to do both that and the trail project at the same time 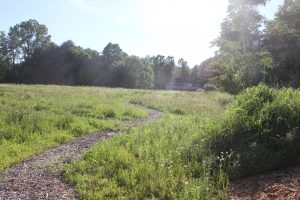 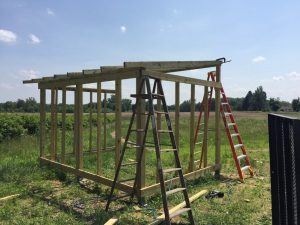 Problem 2 - Costs. Because of unforeseen costs for building materials, we ended up spending more on the shelter than we had anticipated.  Luckily, we were able to make adjustments in our budget that mostly covered those costs.  Frankly, we also had to eat some of those increased costs.

Measuring Benefits and Impacts anticipated from this project

- Metric: measure the increase in number of frames in a new hive over the course of summer. This hive is located not far from the Education Center. Growth of frames will be used as indicator of pollinator health. We have a new member of our farm team who has suggested offering schools, individuals and groups sponsorship of a hive for 2019. The hive would be curated by Moss Funnel Farms, possibly in conjunction with the local beekeepers association in Kalamazoo. Sales of honey produced by the hive would go back to the sponsoring organization.

- Metric: measure media coverage of our efforts and what slant they take. Greater public awareness of the benefits to fruit production of pollinators and pollinator habitat can result in increased support for government aid and regulatory programs that focus on protecting public health and the environment. On a national basis, this story seems to have "legs" and will be around for quite a while. We feel our facility will provide a local angle for national stories and because of the great visual aspects of Bees, Please! we believe coverage of pollination and fruit will continue to grow.

- Metric: During the summer season of 2019 we will measure

Because of the late start for the Trail and Education Center, we will have to defer measurement of these metrics to 2019. However, our flyers have already become a permanent part of the State Welcome Center near New Buffalo and the local South Haven chamber, both of which are focused on economic tourism.

-Metric: Trailhead questionnaire administered via paper and/or via smart phone.

We have already instituted this evaluation system (see "Results" above). The YouTube video of our opening with 90 local 5th Graders shows appeal of the project among kids of diverse backgrounds.

Sustainable impacts will include:

The very strong message delivered by Bees, Please! is that pollinators are an integral part of the ecology of growing fruit. If visitors walk away with just this message, then we will have been successful

We hope this project will also spur other farmers to add similar eco-tainment and agrotourism projects to their farm that will promote sustainable agriculture in a cost effective manner.

We reached out to other farmers in our community, however, while September is ideal for reaching the ultimate audience, children, it is a very busy time for farmers.

Also, a project such as this has a limited appeal to farmers, we believe. Farmers interested in agri-education might be interested, but there are not many. Farmers with u-pick and farm market operations would be interested because such an attraction would draw visitors as well as schools.

Constant Contact email invitations were sent out four times to a list that included key teachers and administrators from nearby schools. We will be continuing to contact these schools and staff to encourage attendance.

For the field day conducted on September 14, 2018  there were six elementary school teachers in attendance, an extension specialist, a member of the Van Buren conservation district staff, an NRCS staffer present, a professor of entomology from Michigan State and a grad student present. In addition a representative of U.S. Senator Debbie Stabenow was present.

Five teacher Evaluations were received. All were positive but two noted that the day had been hot and that the crowd size was large. Two of the teachers said the material was outside their area.  A teacher involved in a unit titled "systems and survival" noted the it had been "a great opportunity for them (the kids) to hear (this material) in a great setting and (get some) hands on."  Here is a copy of the teacher feedback form.

The following four-minute YouTube video captures  a lot of what went on at the field day:

The event was preceded by two articles that appeared in the South Haven Tribune.

The opening of the Bees, Please!  trail was the lead article in the state-wide farm e-letter, Morning Ag Clips on September 21.

In addition, beginning in mid-July we provided hundreds of copies of the following flyer to the local visitors bureau as well as to the State Welcome Center near New Buffalo, MI

On December 4, 2018 at the Great Lakes Fruit, Vegetable & Farm Market Expo, held in Grand Rapids, the Bees, Please!  Project Manager presented a summary as the lead-off participant (below, left) at the “Farm Marketing and Agritoursim Roundtable”, attended by approximately 150 people from Michigan, a number of other States and Canada. 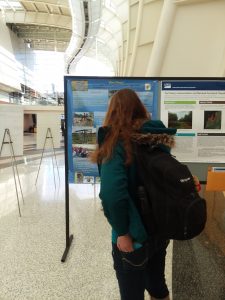 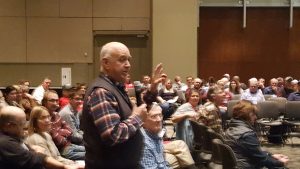 In addition, a 3 ft x 4 ft poster presenting highlights of this SARE project  was on display in the Main Hall throughout the Expo. 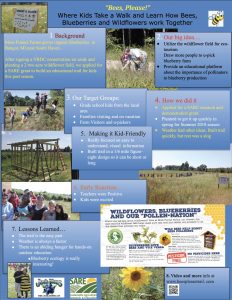 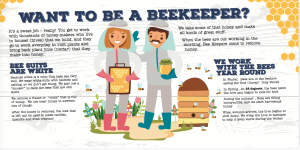 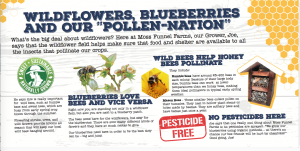 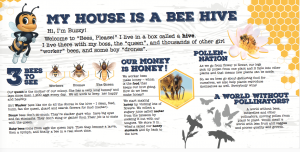