Brad La Fave and Chris Thiry are co-owners of Black Dog Fish Farm LLC. The business is located on Brad's 35 acre farm which contains seven culture ponds and five pond-side fish tanks. The goal is to be able to supply perch year around to growers. To do this, the facility needs to hatch and feed train perch and develop a cold banking system for over wintering fish designated for grow out and the food market.

Dick and Tami Hallam have been farming for 24 years. Their 47-acre farm was downsized in 2011 to a 7.2-acre hobby farm and they still retain all the farm buildings and the manure pit. The manure pit was abandoned about 1989, i.e. drained for safety concerns with raising a family. The Hallams have constructed an indoor aquaponics system. A previous SARE grant is for re-purposing the manure pit and focusing on raising their own feed trained perch fingerlings for their use and sale.

Over the past 15 years, members of our team have been conducting research on perch culture and grow-out systems. The actual time to grow a perch from an egg to market has been reduced from two years to under one year given the right circumstances. Our work has gotten us into high schools and aquaponic facilities, both indoor facilities that rely on a supply of fish to stock tanks over winter. Because perch grow at the rate of an inch per month, fish that are stocked in September will be on the table by December or January. Because replacement stocks are overwintered under the ice in Wisconsin, they are not available to re-supply these indoor facilities.

Therefore, we propose to cold bank premium perch in a cool setting similar to overwintering outside but do it indoors where we have access to them all winter. When fish are needed, we can raise the temperature and increase day length to match the facility they are to be delivered to.

1. The first objective is to spawn, feed train and size grade a minimum of 10,000 fingerlings

2. 10,000 fingerlings will be divided into three overwinter settings where we will establish cold banking criteria (light, water quality, feed regimes, density- year 1 will purposely be low density to accommodate parameters)

3. Third objective is to double densities with the intent to increase per facility holding capabilities to 40-50,000 in five years

4. Fourth objective is to supply all local indoor facilities within a five year window

Perch being checked for size from the indoor cold banking 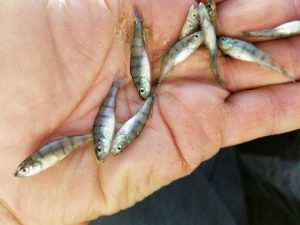 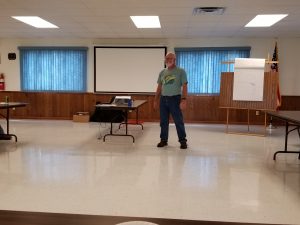 Our first year started out on a bad note with a 30-inch snowfall 4-15-18 just when all the perch were spawning.  90% of our perch eggs froze out.   With the purchase of eggs from another source and collecting eggs from some late spawners we were able to get back on track.

We started seeing fry that hatched May 18th.  We stared feeding commercial fry food along with a special homemade blend.  We put solar lights next to the feeder to attract the fry at night.

Once the fry reached 1.5 to 2 inches, we moved them to several different sites to spread them out.

We ended up growing out approximately 10,000 fry in the Black Dog rearing ponds.  When they reached approximately 2 inches, we divided them up into 3 different environments (1) easy access natural pond, (2) tank environment with well water and (3) tank environment with cycled pond water. These fish reached 5-6 inches and half have been moved to our new indoor pool set up and the other half to deep water pond for winter.  The perch in the new indoor tank were approximately 7.5 inches by February.  These will be available to the local school programs and aquaculture programs this winter and spring

Our best results on the grow out of the fish based on numbers would have been the natural pond environment from the egg to 5 inch fish.  We did learn several things on the tanks.  Next year we will be covering them with a material to shade them from the sun.  Dark tanks produced on average better then the clear or white ones that allowed the fish to be more spooked by any movement or shadows.  This would ultimately cause more stress and end up with more loss.

Perch in the cold banking tank have survived very well with only about a 5% loss.

Blue Iris Fish Farm ordered fry feeds in February 2019.  Fry feeds included fry powder plus several other ingredients which are blended with the fry powder.  Together, this blend covers the gamut of ingredients required as first feeds for perch and includes feed of high protein and fat, vitamins, assorted minerals supplemented by blends of egg yolk, plankton, krill, and spirillum.  It is important to note that our particular style of feed training yellow perch fry considers that this blended feed is initially considered only a partial diet for the fry with much of the feed considered to be natural pond generated plankton.  The second item of note is that yellow perch have a very small gape and most first feeds are too large to be ingested.  Hence the reliance on natural pond culture and fry powder supplements.

Feed supplements were blended weekly by Blue Iris.  Supplements were distributed weekly to the participants of the project or as often as requested.  There was no intent to make up large batches for distribution because it is better to make up smaller batches to insure freshness.  In addition, because the diet changes weekly, the recipe had to be changed weekly to consider the growth of the perch and their ability to ingest larger sized feeds.  For example, in the first two months we are going from a perch that is less than a quarter inch to about a two-inch fish.  The range in size of base feeds is from a fry powder through two sizes of a crumble then through 1mm size up to 2mm size.  At the same time, we anticipate that the fish will be weaned off natural plankton and onto 100% prepared diet which at that point we call it “feed trained.”

There are other procedures to accomplish feed training.  For this project, most of the effort was done in an outdoor setting.  However, some of the feed training was attempted while hatching and first feeding indoors.  Here we supplemented the water with pond water or cultured water.  These efforts were not successful in getting any substantial amount of fry feed trained.  Another technique is to hatch all the eggs in a fertilized pond and allow the fry to eat natural plankton until they are about one inch in size.  At that point they are seined out of the pond, brought into a tank system, and exposed to fry feeds from one to three weeks.  Those that take to the feed are returned to the pond as feed trained.

This project was most successful feed training fry by exposing fry to prepared diets as early as five days post hatch.  Fry were observed to be taking prepared diets as early as three weeks after initiation of the feeding regimen.  This resulted in fry that grew much faster than other techniques attempted.  For instance, with natural feeding only, our records indicate that perch will obtain about one inch in length from late June to July 1st.  With supplemental feeding commencing at about five days post hatch, we have obtained growth rates of one inch per month each month of summer.  This is not critical, but this technique does get fish larger by fall and we are more comfortable size grading fish to obtain premium fish for cold banking and grow-out operations.

One should mention that there are a few assumptions that go into feed training.  For instance, one should have a fair knowledge about just how many fry you have hatched.  This could be quite variable unless you have knowledge of how many eggs you started with and what was the success rate of the hatch – parameters that vary substantially year to year.  When we start feed training, we try to feed at a rate of between 4-6% body weight for fry.  This rate is reduced to about 2% body weight by the time the fish reaches about 2 inches.  However, from above, we initially try to hit a 10% supplemental feed/90% natural feed ratio and slide that to 100% supplemental by the time they are 100% feed trained.  The final variable is to address the attraction to light exhibited by the fry.  Not mentioned above is the fact that we also feed fry 24 hours per day.  Assuming 10% supplemental for day feeding is one thing but if we add a solar light by the feeder, we now must assume that the fry are getting nearly 100% supplemental feed as long as the light is on (between 6 to 8 extra hours).  Use of positive photo response should be considered at least for the first 6 weeks of fry training and reduce the photo hours to between 16 – 18 hours or regular summer daylight hours after two months.  This set of feeding protocols should be based on site observations and will vary widely site to site.

For this project, Blue Iris was able to feed train and set aside about 15,000 fingerlings.  Of that, between 6,000 to 8,000 were considered candidates for cold banking.  Those fish were transferred to Hallam’s fish farm (Scenic Valley Perch) where they are presently being stored in a cold banking environment.  Another 4,000 were raised at the Black Dog site and moved to a deep pond area to fill any other order we may have for early spring.

At the present time, these fish are successfully being cold banked and are available for sale to indoor facilities who are raising perch and may need to harvest and restock their tanks.  We have had 1 school who has taken an order just before the fish were moved to the tanks and 3 more order for this winter or early spring.   As planned, restocking of indoor facilities could begin as early as December and last until the end of March or early April when over wintered stocks from ponds might again be available.

We had a seminar at the Town of Black Creek town hall. With Bill West from Blue Iris Fish farm as speaker, handouts were supplied.  A walk thru of Blue Iris Fish Farm and Black Dog Fish farm followed the seminar.  We will plan another event next August to share combined information from the last 2 years.

The biggest thing we learned this year was not to overload the ponds, starting with the amount of eggs to be hatched to the grow out ponds.  More is not always better!!! This was reviewed with UWSP Northern Aquaculture Manager, Greg Fisher, and a revised plan has been set up on pond population.

Our Cold Banking project started out with a record 30-inch snow fall on April 15 right in the peak of our perch spawning process and froze out most of our eggs.  We did get back on track with the purchase of some ribbons of perch eggs and collection of perch eggs from some late spawners.  This allowed us to hatch out about 10,000 fry and get started.