Dirty Boots Flowers is an urban flower farm operated on a small parcel of land, shared with two other farms, in the East Garfield Park neighborhood of Chicago, Illinois. The land is shared with a parking lot for a powder coating factory and the parcel we use is roughly 300 feet by 40 feet. This allows for 30 beds to be used for cultivation of a variety of cut flowers. The land is managed by Casey Sabatka, with assistance from Jennifer Sher. Before receiving the grant in 2018, the farm was a small strip of land next to a fence on a different farm site and although the scale was not large, sustainable practices were used for the first growing season in 2017. Dirty Boots Flowers believes in the practice of crop rotation, for nutrient purposes and pest and disease control. We also believe in crop diversity. The farm grows over 20 varieties of flowers which helps support pollinators, increases soil health and reduces pest pressure. Although the farm is only entering its third growing season in 2019, and the second on its current site, all of these practices were founding ideals of the farm in 2017 and will be continued for this season and beyond.

Problem: Most of the land under feet and dirt in the air in Chicago is highly contaminated with heavy metals such as lead and arsenic. Therefore, in order to grow food inside the city the first obstacle is to build a clean farm. Most farms purchase expensive and depleted top soil and have it trucked hundreds of miles to their land. Two years ago, we discovered that the chickens at Chicago Patchwork Farms were able to transform wood chips and farm waste into 75 cubic yards of clean, healthy soil. This made us wonder how else we may be able to affordably remediate the toxic land in our communities.

Solution: This project aims to research a solution to the contamination problem in urban soils. We will explore two possible solutions: 1. Binding the bioavailability of the lead through the use of fish bones (Apatite II). 2. Extracting the contaminants via Phytoremediation. Once the soil from the flower farming portion of the farm (Dirty Boots Flowers) has been remediated from hazardous toxins and is food safe, it will then be cycled over to the agricultural part of the farm (Chicago Patchwork Farms).

We built out thirty 30 feet x 4 feet beds on the farm with the grant cycle in mind. The farm was not yet built or designed when the grant was received. At the beginning of the cycle we took the following samples from the beds to the lab for a heavy metal test:

For the 9th (SAMPLE 009) and 10th (SAMPLE 010) samples, we had the bioavailability tested for the beds involving the Apatite II. Sample 009 measured the bioavailability of the heavy metals found within the soil with Apatite + Ironite and sample 010 measured the bioavailability of the metals found in the soil with just the Apatite. The soil samples correlated with the test beds we planted to measure the success for each method of remediation. Testing at the beginning of the project gave us baseline soil samples to cross reference with the final samples that were taken at the end of the project.

General samples were sent to the UMASS lab before, during, and after the grant cycle to test general nutrient content as well as to gain an overarching view of the lead level for the site. However, I have since learned that the lead numbers listed in general soil testing are not nearly as accurate as the ones listed both UMASS or other organizations' sorbed metals tests that are obtained through the use of strong acid and heat.

The specific sample IDs listed above were sent to the Loyola Environmental Testing Laboratory in Chicago for a heavy metals test via the acid dissolve method. We chose Loyola because they were one of the few labs we could find that offer the bioavailability testing and also local! The final two samples were tested for bioavailability to test the apatite's ability to neutralize the lead's toxicity when passed through the body.

*unit of measurement is mg/kg. Sample #s 009 and 010 reflect the bioavailability of the highlighted metals. See attached soil samples for full report.

Samples 001-008 with the exception of 003 show a decrease in both lead and arsenic levels. The slight increase in sample 003 is probably due to human error when collecting the soil sample.

At the beginning of the 2018 season, we held a field day with a group of about eight students from Chicago Public Schools. In addition to building out the beds, we discussed the importance of practicing caution when interacting with urban soil and overall soil safety in regards to lead and other heavy metals. The students were high-school aged. Thus, we were also able to have an in depth discussion on the details of our upcoming grant cycle. 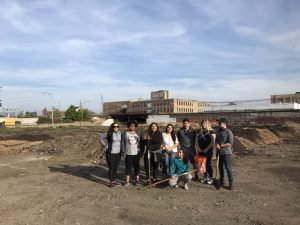 This past winter (2019), we were given the opportunity to bring up the concerns surrounding food safety and urban soil at the NCR-SARE Farmers Forum at the Michigan Food and Farming Systems (MIFFS) Conference. We discussed our grant and the ways in which we are remediating the heavy metals in the contaminated soil.  This presentation was a major way we reached fellow farmers and agriculture professionals in the field. Due to the nature of our work, it overlaps with issues residents of Detroit are facing with contaminated urban soil. We received a lot of interest and questions and opportunities to stay in touch. Our plans moving forward include a follow up presentation at MIFFS containing the results following the conclusion of the grant cycle in 2020.

We will also share our findings with our Chicago community through various presentations such as the Midwest Urban Farmers Summit. We have also been speaking with the team at the Chicago Safe Soils Initiative, who are building a lead map of Chicago, to do some future collaborations. We will continue to post on social media and the website with updates.

One of the initial striking realizations we were faced with when starting the grant proposal was that there was not a lot of definitive research on phytoremediation or soil remediation in relation to the Midwest or on a small scale for urban agriculture. If I were to point out the biggest takeaway from this project it would be for a continuing researcher to learn from our successes and failures. As you can see the lead and arsenic levels did decrease by almost half overall,  but we ran into barriers with each of the methods in the following ways:

1.) Phytoremediation - The ferns were hard to source, expensive, and not well suited to the conditions of our land. However, the mustards, sunflowers, marigolds, and grasses thrived. One of the biggest barriers we faced was the disposal of hazardous plant material that resulted from phytoextraction. Upon investigating further and discussing with our network, we have found that this seems to be a hole within phytoremediation. At least, as far as accessibility to safe disposal for your average farmer/rancher or small gardener. The phytoremediation has no clear pathway in terms of disposal of hazardous materials.

2.) PIMS with Apatite II - Initially when working on the project, I believed Apatite II to be somewhat of a miracle substance as the lead content of the site reflected in the UMASS reports dropped dramatically to below the safe levels. Apatite II is fast acting, so initially we viewed this as the most viable solution for soil with lead that is far above EPA safe standard. However, the price point makes it pretty unrealistic for most urban farmers. Additionally, the final soil samples 009 and 010 did reveal an interesting piece of information. As the bioavailability of lead in the two soil samples decreased, for some reason the bioavailability of Arsenic increased.

As one can see, these are not quite the results we had hoped for but now each bed has fallen below the EPA safe soil standard of 400 mg/kg for lead. However, none of them have yet fallen below 100 mg/kg which the EPA has recommended as a safe level for gardening.

One discovery that we have learned is that many people are exploring projects similar to our own in the Midwest. The University of Illinois is currently building a lead map of Chicago and soil tests with free lead screenings are becoming more commonplace. We connected with a woman in Michigan who is studying the effect of bone meal on heavy metals as well as a mycologist in Detroit who is in the beginnings of an academic study to observe Phytoremediation.

Although all of the samples (with the exception of sample 003) had a significant decrease in the percentage of lead an arsenic content found within the soil, we would not recommend the any of the methods outlined in our project as the final solution for soil remediation.

Overall, I think the reduced heavy metals can in part be explained by each of our efforts but overall may have something to do with the topdressing of compost. I would advise any future farmer/ranchers who are in pursuit of studying soil remediation to research compost and it's ability to change the contents of soil and remediate heavy metals and toxic materials.

As one can see from the soil test results, no one method stands out in terms of successful results. Throughout this process and having spoken with other farmers, it is my belief that coming up with a large scale compost system is the most affordable, practical,  and reliable remediation technique for urban farmers.