My family and I own and operate an eight acre apple orchard in Viroqua, Wisconsin; near one of the most concentrated regions of apple production in the state. Some apple trees were already established when my parents bought the property in 1991, and we have tried to preserve many of these older trees while focusing on planting heirloom apple varieties. There are a total of 150 apple trees in production as we are in the process of clearing more space to be planted. Of these trees, approximately 40 of them are full-standard size while the rest are semi-dwarf root stock. We have not used and do not intend to use chemical sprays in the orchard. It is our goal to support a vibrant and diverse community of pollinators so we have planted many perennial plants to ensure flowers are blooming in the area for most of the growing season.

The production of hard cider is a rapidly growing industry in the North Central region of the United States. The aesthetic appearance of the fruit in hard cider apple production is negligible and so damage from fruit-feeding insect pests is less of a concern. However, foliar-feeding insects still pose a threat, killing young trees and impacting fruit size, yield and sugar content of fruit. To date, pest susceptibility and management research in apple has been done only with fresh-eating varieties. As more cider-specific varieties of apple are planted in the North Central region, knowledge regarding the susceptibility of cider apple varieties to foliar-feeding insects will improve the efficacy of insecticides by allowing growers to utilize plant host resistance to combat these insect pests. We propose a study to screen popular, cider apple varieties for foliar-feeding insect pest susceptibility, leading to the creation of a susceptibility index for each variety and specific knowledge of the timing at which each insect attacks young trees in Wisconsin. These data will provide a foundation for developing low-spray and certified organic disease management strategies for cider apple varieties based on susceptibility to insects.

Test Planting:  For the test plot, 10 cider-specific apple varieties were planted on semi-dwarf rootstocks with 8 single-tree replications of each variety. Trees were planted in a randomized complete block design at a standard spacing of 15ft between semi-dwarf trees. Rows were spaced 22ft apart to allow for vehicles between them, resulting in a 43318 sqft plot (0.99 acres). Deer-fencing was erected around the plot allowing 22ft between row ends and the fencing. No pesticides were applied to allow for insect colonization and damage to occur. All apples were removed from trees that produced any during the course of the study to prevent splitting of branches and to promote vegetative growth of the trees. Irrigation was provided as needed.

Varieties and insects chosen: The cider varieties chosen were based on popularity in the U.S. and cold-hardiness (up to zone 4 and 5) to represent cider varieties that have potential to be adapted and planted in the North Central region. Varieties chosen include: Newtown Pippin, Smokehouse, Winesap, Golden Russet, Cox Orange Pippin, Dabinett, Roxberry Russet, Harrison, Gravenstein and Summer Rambo. Foliar-feeding insect pests of concern for the North Central region include leafminer, leafhoppers and the Japanese beetle, and therefore will be specifically studied.

Data Collection/Analyses: Data was recorded periodically as incidence (i.e. numbers on tree or tissue-feeder mines, depending on insect) and injury (rating of 1-10 based on percentage of leaves affected) from various foliage-feeding insect pests (i.e. leafminers, aphids, leafhoppers, Japanese beetle) throughout growing season. Injury ratings collected in 2020 were used to calculate a susceptibility index (adapted from Joshi et al. 2015) for each variety, based on a standardized mean injury rating per variety (standardized over monthly averages). Statistical ANOVA from a mixed-effect model (tree replicate as random effect) and post-hoc mean comparisons (Tukey's method) were performed to determine significance of tree variety and which variety exhibited the highest and lowest susceptibility to foliar injury from insect pests. Disease injury was also recorded in 2020 to provide supplemental information and a comparison against foliar insect injury (primary diseases observed were cedar apple rust, scab, and apple anthracnose canker). Summer Rambo trees were removed from our analyses because more than half of the 8 planted developed severe anthracnose infections (these infections were believed to have originated from the nursery they were purchased from) and had to be removed from the orchard to prevent further spread of the disease.

Foliar-feeding insect pests were counted bi-weekly on each tree following their establishment in the first week of May 2019 (however, no insects were observed feeding until early June 2019 when the trees had fully leafed out) until late August, and again May-August in 2020 (Table 1). Of the three pests that are of higher concern in the North Central region, only leafhoppers were observed in significant numbers over the course of our study. Insect pressure was greatest in July in 2019 and in May in 2020 (Table 1). Pest counts by tree variety were not the same from 2019 to 2020 (Table 2), and the most abundant pests were different from 2019 to 2020 (Figure 1). Leafhoppers and leafrollers were the most abundant pests overall at our study site, however, leafrollers became significantly more so in 2020 (Figure 1). The ANOVA results from modeling foliar pest injury with cultivar as the main effect (tree replicate as random effect) showed cultivar was highly significant (P < 0.0001). Calculation of a susceptibility index was based on foliar injury ratings for each tree variety and averaged over the growing months of 2020.

A post-hoc mean comparison of index values found that Newtown Pippin was the most susceptible variety to foliar damage from insect pests--significantly more so than all other varieties measured, except for Roxbury Russet, Winesap, and Winecrisp that were also more susceptible (Figure 2). Ranking tree varieties by greatest foliar injury (highest susceptibility) to the least foliar injury (lowest susceptibility) can be read as: 1) Newtown Pippin, 2) Winesap, 3) Roxbury Russet, 4) Winecrisp, 5) Cox Orange Pippin, 6) Red Astrachan, 7) Franklin, 8) Gravenstein, and 9) Whitney Crab.

The results from this study suggest that some cider apple trees are more susceptible to foliar injury from insect pests than others are, this was supported by other studies that compared more common fresh-eating and juice apple varieties (Joshi et al., 2015; Hogmire and Miller 2005). Specifically, we found from the 9 different tree varieties studied, that Newtown Pippin incurred significantly more damage than most of the other tree varieties (Figure 2). Frankling, Whitney Crab, and Gravenstein apple tree varieties exhibited the lowest susceptibility to foliage pests at these early stages of planting (from bare-root 1 year old seedling to year 3 of tree's life). Interestingly, the mean pest counts (average number of insect pests observed on each tree) for each tree variety did not correlate (P = 0.6, Pearson's correlation test) with the mean injury ratings for those cultivars (Table 2, Figure 2), indicating that maybe pest abundance may not necessarily be the best predictor of pest injury. However, another explanation for this incongruity could simply be the difference in sizes of tree (e.g. Gravenstein had more vigorous growth, attaining larger leaf areas than Newtown Pippin and Winesap varieties). Because these trees grew to be slightly larger, they could buffer more insect abundance and damage with more foliage.

Greater susceptibility of tree varieties to disease (at this site, these were primarily cedar apple rust, Gymnosporangium juniperi-virginianae, and scab, Venturia inaequalis) also did not necessarily coincide with lower susceptibility to foliage pests (Figure 2, 3). If tree foliage becomes infected with a fungal disease like cedar apple rust or scab, this may reduce its appeal to other insect feeders and thereby artificially decrease its susceptibility to foliage pest injury, however, this was not consistently supported in our results. For example, Newtown Pippin trees had both high disease and pest injury to its foliage, while Gravenstein and Franklin trees had both low disease and pest injury susceptbility (Figure 2, 3).

Table 1. Distribution of pest abundance observed on trees over the growing seasons.

Table 2. The distribution of insect pests observed, by tree variety. 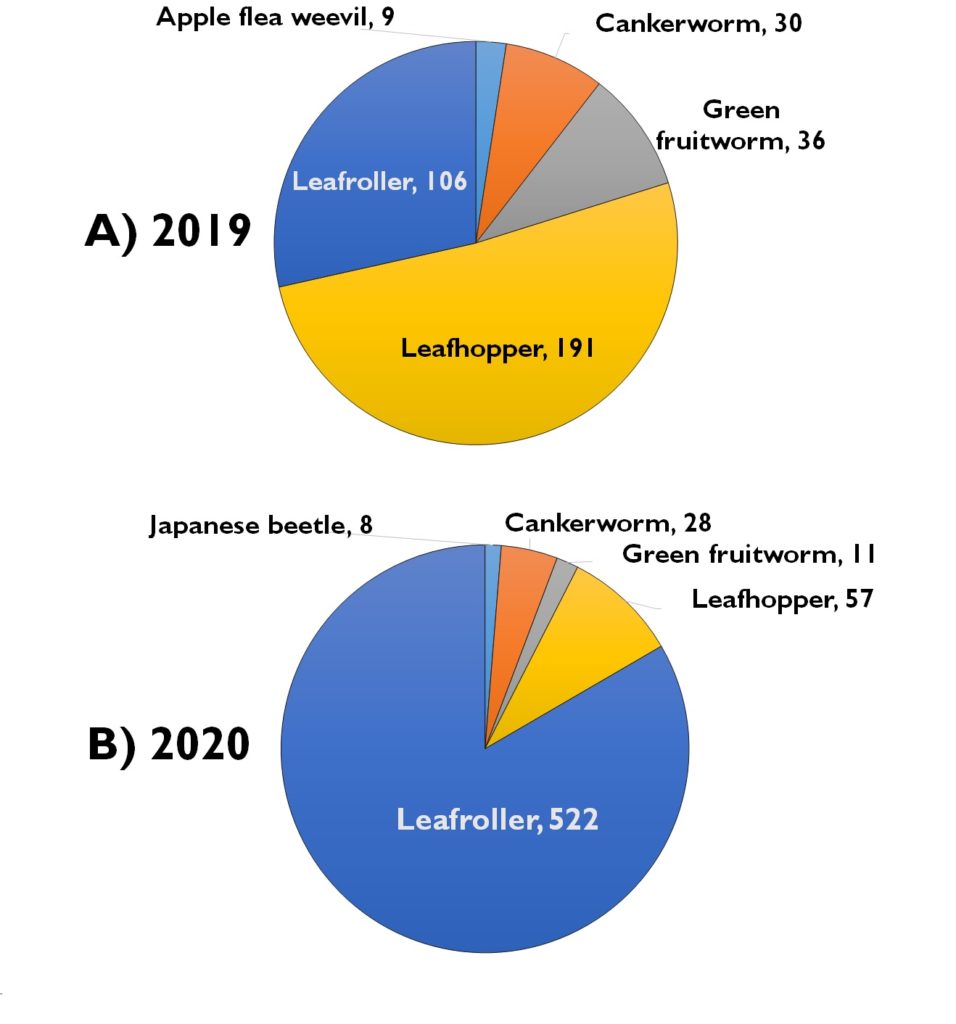 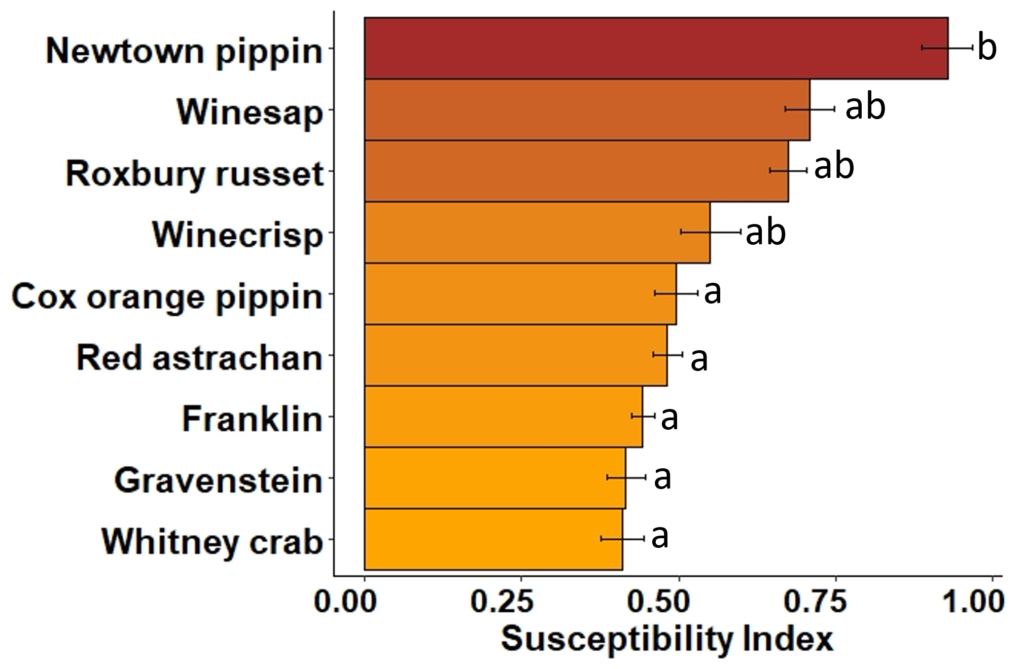 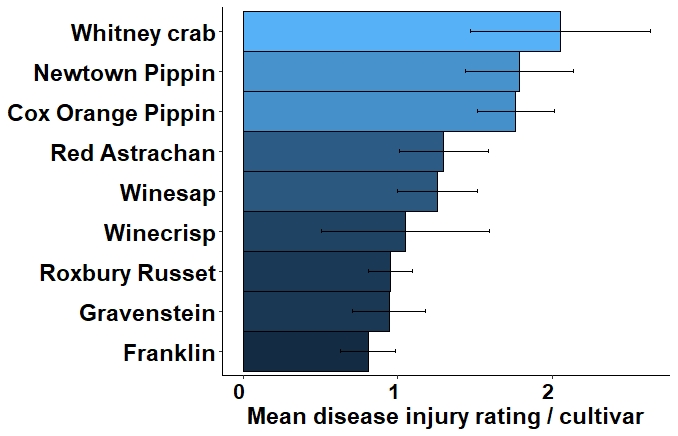 We created and presented a (virtual) poster for the 2021 MOSES/Growing Stronger conference and we also developed a factsheet that summarizes our project. Our MOSES presentation was on demand and available online for 90 days following the conference start date so we don't know the total number of farmers or ag professionals that participated in our outreach at this time. The factsheet will be provided to fruit crop extension specialists at the University of Minnesota-Twin Cities and the University of Wisconsin-Madison, as well as to anyone who requested more information from our MOSES presentation. Unfortunately, the conditions created by the global pandemic did not allow for any in-person interaction during the final year of our project (when we actually had results to share!) and so we hope to host a field day or other activity in the future when social distancing measures have abated.

We discovered many different types of insects, from pests to beneficial predators, that we had never seen before. Being out and scouting every other week helped us "see" more of the orchard and increased our awareness of the trees' growth patterns, the succession of flowering plants in the understory, and the corresponding changes in insect communities. It was very rewarding to have the opportunity to investigate questions about the ecology of our orchard. We also learned a lot more about caring for young apple trees, because this grant allowed us for the first time to protect many newly planted trees from the abundant deer in the area.

Some advantages of implementing a project like ours include the establishment of many apple trees that will provide fruit for years to come and, because we began our close scrutiny and care of the trees at the very beginning of their lives, we now have an excellent foundation for monitoring the trees in coming years. In some ways, we have a better idea of what to expect.

One disadvantage of implementing our project was the fact that we had an 'establishment' study and so had to plant almost 100 apple trees in one weekend! As luck would have it, we were delayed by heavy rains before planting and, when we finally were able to plant, it was still a little too wet.

If asked for a recommendation concerning the results of our study, we would tell other farmers that cider apple tree varieties like Franklin, Gravenstein, and Whitney crab are very hardy, pest resistant trees for the North Central region, whereas tree varieties like Newtown Pippin and Winesap may be more difficult to maintain in their first years of growth. For more information, we would suggest that other farmers plant a couple trees to screen them first before planting hundreds, contact us in a couple years and we would have refined knowledge of our trees' health, and to search out information from other larger orchards and university extensions.

Future studies related to this grant could investigate the dynamics of beneficial insect predators in the orchard and what effects tree variety, and/or different pest/disease management strategies would have on them. We would like to investigate disease resistance and organic management strategies for both foliar and soil borne disease of cider apples. There are many more cider apple varieties that would grow well in the North Central region, we only screened 9 of them and so this type of study could be repeated with other varieties.