Sklarczyk Seed Farm is a small business and third generation farm operating out of Johannesburg, Michigan. We farm 1000 acres of wheat, corn, and soybeans, as well as 50,000 square feet of greenhouse space. The hydroponic seed potato greenhouse operation is the focus of our diversified farm, producing over six million seed potatoes of over two hundred different varieties annually. Our on-site tissue culture lab produces plantlets for the greenhouse and a handful of growers. All minitubers produced by SSF are certified to be virus and disease free by the Michigan Seed Potato Association. We have received MAEAP verification for Farmstead, Cropping, and Greenhouse Systems. Currently, SSF employs twenty year-round and ten seasonal employees.

At this time, no industry standard exists for the pre-planting treatment of seed potato minitubers, despite potatoes being the third most important crop worldwide. The proper preparation of minitubers through Greensprouting procedures has the potential of doubling overall production of year one seed potatoes. We believe that through experimentation a low investment, high return standard procedure can be developed that will be effective regardless of growing conditions. It will maximize yield on the cultivated land already in use for potato production without need for additional inputs from growers including a larger farming footprint, increased pesticide applications, or longer days for busy farmers.

Greensprouting will be accomplished by removing minitubers from a 35° storage environment several weeks before planting, then placing them in indirect light at 70°and gently rotating every three days. Short, green sprouts will develop, indicating that the minitubers have broken dormancy and are ready to be planted. Control minitubers will receive similar treatment for only three days prior to planting. All minitubers will be planted in replicated randomized block designs at 1.0, 2.0, and 3.0 inches at test plots in Michigan and North Dakota. Plant vitality, days to emergence and overall yield will be monitored and analyzed.

Field Trials were conducted during the 2019 growing season on cultivated land in Michigan and North Dakota. Management of the test plots and the surrounding potato fields were overseen by on-site farm managers, while experimental design and data collection were performed by Sklarczyk Seed Farm.

Multiple varieties were planted in the trial plots including Lady Liberty, Russet Burbank, and Umatilla Russet. Minituber seed was planted in the field surrounding the plots to prevent alteration of field crop management practices, reduce variables, and generate the maximum amount of usable data for early generation minituber partners and growers.

Greensprouting method experiments were performed. Overall yield (mass), number of seed pieces, seed size, and plant vitality were monitored for each of the tested factors. Yield data was collected one hundred days after planting by performing a ten-foot dig and recording total mass.

Two greensprouting treatment procedures were tested and evaluated for effectiveness in increasing yields. Method 1: remove seed from long-term storage 4 weeks prior to planting and store under indirect light at 70˚. Method 2: 4 weeks prior to planting remove seed from long term storage, place in darkness at 68˚ for one week, then move under continuous direct light at 62˚ for 3 weeks. 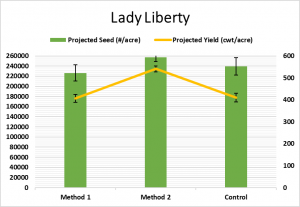 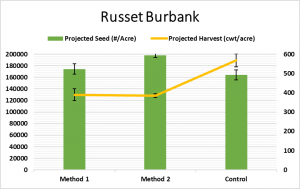 See Figure 2: For variety Russet Burbank, Method 2 yielded highest seed numbers, while the greatest mass was harvested from the control. 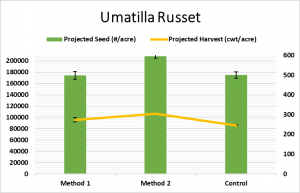 A team of three presenters attended the Great Lakes Expo located in Grand Rapids, Michigan in order to participate in the three-day annual poster presentation and session. Printed copies of the research poster were available for distribution to all interested attendees. Additionally, the presenters were available for an hour-long informal question and answer session to provide interested attendees with specific information regarding the practical implementation of the studied seed-treatment practices. Social media was utilized to increase awareness throughout the event.

Field days took place at farming sites in North Dakota and Michigan for both the planting and harvesting of the studied crop in order to create awareness for the project, as well as educate farmers and participants in the research methods being utilized to study the effects of greensprouting.

We plan to continue to present our findings on the effectiveness and sustainability of greensprouting to the greater potato industry through field days, farm visits, conference presentations, and consultations into the future with the distribution of research posters and reports highlighting its benefits.

40 Farmers reported changes in knowledge, attitudes, skills and/or awareness as a result of their participation
Lessons Learned:

We have found that Greensprouting is an important and viable method for increasing year one seed potato yields in an accessible and sustainable way. The method of accomplishing Greensprouting of the minituber crop can directly influence the yield of year one seed potatoes. Growers who desire whole-seed over cut-seed could see massive benefits to manipulating their greensprouting methods as doing so can dramatically increase seed numbers, while not necessarily influencing hundredweight per acre. We have found that this detail presents the greatest benefit to the potato industry, and has generated the most interest in the project and its results.