We are a diversified permaculture farm in the Cuyahoga Valley National Park. We grow cider apples, and other fruit; berries, mushrooms, veggies and herbs; raise pork and ducks for meat and eggs. We have been in operation since 2016. Our goal is to create an ecological niche for our agricultural pursuits to thrive. Restoring the pond back to health was an important step.

Our goals are to restore a debilitated man-made pond using permaculture design principles, and reintegrate it as a central part of the whole farm water management system.

The pond, and connected drain tile, were originally installed with an outdated model for water management, which accelerates the flow of water downhill to the pond, into the near by ravine, and into the Cuyahoga River. Current status includes poor soil conditions, erosion, flood/drought cycle in the fields and in the pond, and loss of topsoil into the river. Our plan includes using biological and mechanical methods (in lieu of chemical treatment) to restore the oxygen level and ecological diversity in the pond, improve soil health around the edges of the pond and in the adjacent fields, and introduce these ideas to farmers and the community of the Cuyahoga Valley National Park, where our farm, and our watershed are. The results will include: enhanced agricultural activity around the pond, enhanced wildlife habitat, and an innovative model for the community to learn water management.

Common wisdom, and ODNR, prescribe chemical treatment of the pond for three years, to reduce weed pressure, followed by dredging, high impact practice, to increase depth of pond and reduce organic matter. We would like to propose a pond rehabilitation that minimizes inputs. Our planned activities include:

Cover crops will be planted at least twice, with a diverse mix that is suitable for improving water absorption, building organic biomass, feeding ducks, attracting pollinators, and maybe even providing forage.

In year 1 we achieved:

In the second year we worked with the National Park Service to monitor the pond.  This included three measurements: spring, summer, fall, to capture the dissolved oxygen, pH, and other less meaningful measures.  I hope to continue this partnership for another year, until the fish can be confidently introduced, and a longer term pond management strategy developed.  The data is very important, but also is the partnership with the NPS staff, who in some way become part of this project, with whom there is much learning and knowledge sharing.  For example, what plants should we cultivate for maximal ecological health?  What bird populations might this affect?

Here are the three sets of measurements:

In the second year we continued to manage the edge of the pond, to prevent shrubs, cattails, and other weed to grow back up. This involved:

-manual removal of cattails with weed whacker, and pond rake.  This is easy enough to do a couple times a year.  We also tilled in a diverse cover crop mix around the pond, about a 20-30' wide ring.  the ducks enjoyed grazing on this.  The cover is visibly improved since the excavation in Year 1, perennial grasses are coming in with a lot of clover.  There are still lots of weeds though.

-rotating ducks around the pond to eat the surface weed, cattails, and taller plants around the edge.  they did a good job keeping down the grasses, but surprisingly poor job eating the surface weeds.  We observed that (50) Pekin ducks were the worst, but the (12) Muscovy, and (14) Golden Layer were better weed managers.  The Pekins were butchered at the end of the year.  The Muscovys are great free ranging on the pond, but are not very winter hardy.  The Golden Layers are great free ranging on the pond and seem to be very winter hardy.  We expect to keep them in smaller number as one management tool for the pond. 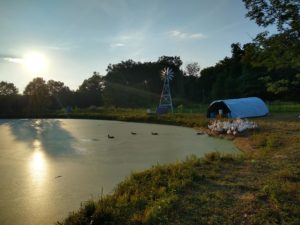 I should say about the duck shelter: we decided to keep them off the pond because it's hard to get their eggs, and because we had less predation issues than expected.  I think this is due in part to our farm dog, and in part because predators prefer chicken, or just don't like duck.  The shelter we ended up with is efficient, light, mobile, and can be repurposed.  It is conveniently tall for the farmer, has a place to hang an auto waterer, and where you could attach a dish.  When moved the old nests/straw is left behind as nicely fertilized mulch.  Ducks are messy, so it's nice not to have to clean out the nesting area.

-we should have done more to clear surface weeds like duckweed and watermeal.  By July there was 0% dissolved oxygen and it was in large part related to the thick and almost complete coverage of the surface by these two weeds.  This prevented sun from hitting the water.  (It's also a time of year with little wind, which prevents the windmill from aerating the pond) We purchased from A.M. Leonard a pond rake and weed razer, which allowed us to manually remove/minimize weeds about 15 feet into the water.  Our one acre pond is as large as two people would use these manual tools for, especially with lots of weeds to clear.  We didn't have access to a boat until later in the season, and could have done this exercise of raking in the weeds more effectively, throughout the pond surface. 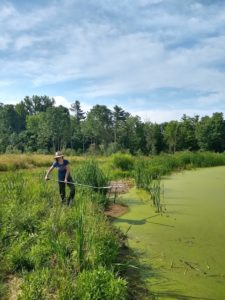 -we also considered the impact that the existing trees and shrubs growing on the dam have.  Removing them will cause the roots to rot and create openings to water to leak through the dam.  Leave them growing and the same might happen anyway.  Managing a pond is a long term commitment, you can't let shrubs and trees grow on the dam.   But what to do once they're already there?  This will be a longer term research.

In Year 2 we continue to monitor the pond depth, and the ways in which we can fix the spillway to increase the depth.  We chose not to cut the overflow pipe, which would be a quick solution to prevent the pond from overflowing on the old spillway.  We will instead look for fill dirt this year, to build up the old spillway.  We purchased our first four-wheeled tractor in 2020, and can now afford to complete these simple earthworks ourselves.

-continue weeding the surface and edges of the pond, and maintain about 12 ducks on the pond.

-begin to introduce native and positive plant species into and around the pond. This will be done with help from NPS staff and volunteers. 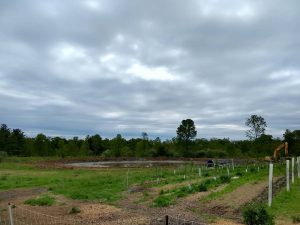 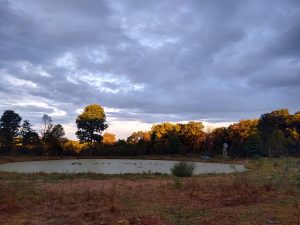 In May 2019, right before the excavator work began, 14 staff members with the Cuyahoga Valley National Park Conservation Department came for a field day.  This meeting was organized via internal communications, because the department scheduled their quarterly field day with advance interest to visit the project site.  The conversation with these staff members and the department as a whole is ongoing.  For example, post field day, two park botanists spent 3 hours over the course of two days, monitoring the various frog populations around the edges of the pond, to help us better understand the ecological niches our farm provides. The park provided feedback about the limitations of using triploid carp for weed control.

In September 2019 we hosted 20 CVNP volunteers for their annual field day.  This event was promoted by the Conservancy for the Cuyahoga Valley National Park, with advance interest to hold their event at the project site and learn more about our water conservation efforts.  The promotion was via email to all the park's volunteers.  The volunteers are considered CVNP ambassadors, and will continue to include information about our farm's conservation methods in their conversations with park visitors.

We hosted an additional 3 tours, in June, August, and November 2019.  These were advertised via Facebook, and our email list, simply as Open Houses and Tour.  The language that related to the pond read: we will lead a tour around the orchard, and the pond, and discuss the permaculture approach to water conservation on the farm.  They were open to the public, and had variable attendance of 45 total.

In 2020 we conducted one educational tour, with volunteers from Summit County Metroparks.  The in-person attendance was necessarily low (6), but this was a recorded and publicly available tour.  The topic was water conservation, and we discussed the various methods of holding water higher up on the landscape, and on our farm, like planting on contour, ground cover/mulches, and permaculture swales.  We walked downward toward the pond, to discuss the SARE project and good pond management techniques, as well as the more general translations of water conservation to people's homes and other areas of interest.

We look forward to continuing to discuss and educate on water conservation and good pond management.

Our learnings so far in the project are:

Advice to farmers considering to restore/manage a pond: if more funds were available, and we knew that the grass carp weren't allowed, we would have decided to go with the full dredging of the pond.  The initial earthworks, and soil disturbance, if needed to some extent, might as well be used to their full extent.

On the other hand, we are seeing enough transformation with our current methods to keep us hopeful.  On a final note, we are only 9 months into the project, and will report back.

-Pond management is a long term commitment.  It is important to prevent issues, and it is difficult to fix issues.  Our incremental approach is showing positive results.  However, this is a relatively short term research, and with more years to observe and manage, we would see more clear effects of our management approach.

-With all things done right, there will still remain a big issue with our pond: the overgrown dam.  We will continue to evaluate the opportunities to prevent leaks.   Currently, there are three large/healthy trees, and additional smaller, older trees, that are beginning to die back.  There is also a dense cover of autumn olive, and brambles.  We will maintain discussions with experts at NPS to strategize.

This project provided an opportunity for our farm to work more closely with National Park Service staff.  This is an invaluable long term relationship for us to have.  As it should be, relationships with local institutions, like Extension office, etc, are great sources of information, expertise, equipment, and more.

An anecdotal success is farmers and other neighbors seeking my input on their water conservation concerns.  Encouraging one farmer to change the direction of their rows, another to divert water without tile.  A few folks asked for consultations for 'fixing' their water issues.  Helping our watershed community identify and deal with problematic water flow, and changing those patterns to build an overall healthier watershed is what this project is accomplishing.

Evaluating the use of Tilapia for weed management has value.  But, it would also be great to compare against other fish, specifically triploid carp. Finally, what is the compatibility of the two fish together for managing a pond?

I'd recommend evaluating various pond plant species that would enhance the ecological health and decrease dependence on inputs for management.  Also, is there an agricultural use for pond weeds?  What is practical for harvesting cattails, duckweed, or better/native plants?  These plants have nutritional value.  Might they be incorporated into diets of livestock, while helping to manage health of pond?