Quiwi Produce is an urban farm located in Cincinnati, OH that operates on a 7500 sq ft lot and inside a 2000 sq ft warehouse. The local urban farm was started in 2013. Crops that are grown are tomatoes, peppers, greens, squash, lettuce, corn, watermelons, kale and zinnias. Some produce is grown outdoors during the growing season but we also grow produce indoors using hydroponics year round (lettuce, greens, tomatoes, peppers and soon zinnias).

Waxworms which are the larvae of the greater wax moths (Galleria mellonella) and lesser wax moths (Achroia grisella) and small hive beetles (Aethina tumida), are parasites and scavengers of honeybee colonies, Apis mellifera. All three are very destructive to beehives and overall affect bee colony health. While there are numerous mechanical and chemical controls available on the market for these pests, they still are wreaking havoc on the beekeeping industry. Implementing the use of Bacillus thuringiensis species as a biological control for these three pests adds another line of defense against them. The overall goal is to improve honeybee colony health and prevent colonies from absconding or being killed by the infestation. With healthier hives there should be increased profits for beekeepers because damage caused to honey and other products should be reduced or eliminated.

The field project: Initially 4 Bt. species will be tested in the lab to determine which Bt will be more effective against the pest. There are two that are recommended for caterpillars and two for beetles. Waxworms will be purchased and tested against each of the two by applying Bt to feed and determining which one is effective against the larvae. The same will be done for the small hive beetles. Adults will be collected and reared on honeybee protein patties. They will be allowed to mate so they can reproduce. Once there are larvae, Bt feeding trials will be conducted on the adult beetles and larvae. The results from this in-lab experiment will determine which Bt will be used in the hives. A total of 7 hives will be set up on the urban farm (2 control=no Bt just normal treatments used against pests, 1 with just caterpillar Bt, 1 with just beetle Bt, 3 with both Bt strains). Hives will be inspected bi-weekly with pests removed and counted. This data will be recorded.

Workshops and Entomology club will be hands-on. Materials used in the field project will be present at both. I will demonstrate how frames and hive are treated with the Bt. I will demonstrate how to prepare Bt solution, where to purchase, etc. Waxworms and Small Hive Beetle specimens will be present so individuals know what the insects look like, they will learn about their life cycle and the damage they cause. Entomology club students will actually spend time at the hives learning about beekeeping. Any video or photos I take during the project will be used in the workshop and entomology club. I will also present an online webinar presenting the same information present in the beekeeper workshop.

Four nucs were purchased and setup in April 2021. Bt spraying will start in July 2021.

The purpose of this project was to test Bacillus thuringiensis spp. (Bt) effectiveness again waxworms and hive beetles living in beehives. The first part of the project was to test which two caterpillar specific Bt spp would be effective for the larvae of the greater wax moths (Galleria mellonella). Initially B. thuringiensis, var. aizawai, B. thuringiensis var. kurstaki were going to be used. After consulting with the EPA to determine if this project would be environmentally safe, it was determined that B. thuringiensis, var. aizawai could be toxic to honeybees so was not used for the experiment.   To test the effectiveness of B. thuringiensis var. kurstaki  on waxworms, a container of 50 (Galleria mellonella) waxworms was purchased from Petsmart. Frozen honeycomb from one of my older hives was used as the food source for waxworms in this trial. 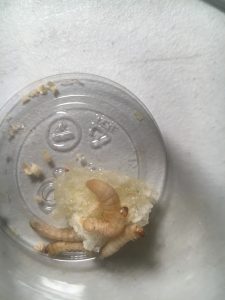 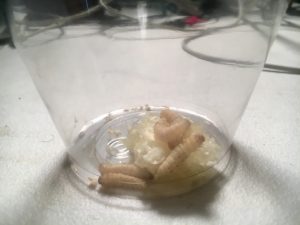 Five cups were set up with a piece of wax and five waxworms in each. One container was used as the control and did not receive any of the Bt spray. The waxworms were allowed to acclimate to the new environment and food source for two days. The brand of Bt used in this trial was Safer Brand's Caterpillar Killer. The concentration that was used was that for vegetables and fruits which is 1 tablespoon per gallon of water. The solution was placed into a sprayer and the Bt was sprayed into the containers with the waxworms. The waxworms were observed. Some were feeding on the wax others seems to be ready to enter into their pupal stage so their feeding was limited. However after 48 hours the feeding larvae stopped eating and eventually died.

The goal was to rear a colony of hive beetles to test B. thuringiensis var. San Diego tenebrionis  and Bacillus thuringiensis galleriae for their effectiveness against the adults and their larvae. This however was not possible because the colony of beetles died prematurely before the trials could be run. They were being kept in a jar inside a greenhouse. The temperature in the greenhouse reached into the 90Fs one day and killed the beetles. I was unable to find a decent number of beetles to start over. The Trial will be carried out this spring 2020. By then there should be beetles in the hives that overwintered. 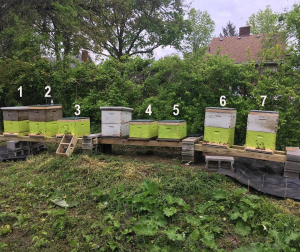 There were a total of 7 hives setup to be used in this projects. The hives were to be treated in the following manner:

The plan was to spray each hive once a month with the Bt solution on the brood frames to prevent waxworm and hive beetle infestations. However from the inception of the hives on May 2, 2019 they were plagued with issues. Heavy rains during the month of May prevented foraging. Multiple hives had to be re-queened (5 of 7) at least twice. Hive 3 was the only one that seemed to build up the colony that was expected during a season. Hive 1 had a queen that was laying and had laying workers so it was full of drones. I replaced the queen but the hive never built up in numbers throughout the season. Hives 2, 4 and 5 all had to be re-queened twice. I initially bought 2 new queens but then I started allowing the hives to make queen cells and let them re-queen themselves. Hive 6 did not need re-queening. Hive 7 needed to be re-queened once. After dealing with these issues starting in May/June I decided I did not want to add the Bt spraying for the waxworms to the already fragile hives. The spraying of the Bt will commence this year 2020.

The goal of this project was to determine if  Bacillus thuringiensis species can be used as biological controls against waxworms and small hive beetles. Laboratory data collected has shown that the B. thuringiensis has promising results in being an effective control again waxworms. For my project I will have to extend my finding into this season (2022). I was never able to spray the Bt in the hives. I was not successful at keeping a colony of hive beetles alive. After doing more research on their growing needs I am going to attempt to rear another colony this coming spring.

Due to abnormal weather patterns my beehives were not as strong as they have been in the past. I am going to capture swarms this year instead of purchasing from suppliers in the south. I am still convinced that bees from southern regions have issues adjusting to different environmental changes when they are brought to northern regions. The pandemic also prevented me from receiving supplies in a timely manner so that they could be used during the time bees are active. One of the Bt bacteria I had intended on using did not come in until too late in the season due to shortages and shipping issues. I did not receive it until the end of August. This did not give me enough time to test the spraying in the beehives being fall sets in September. Now, that I have the bacterial culture I can make the sprays and prepare to use this coming bee season 2022.

1 Other educational activities: Career Day at a Local Elementary School on May 16, 2019

The outreach that I conducted was a career day at a local school on May 16, 2019. During that event I interacted with almost 200 youth teaching them about beekeeping, entomology and agriculture. While they were not farmers, ranchers and agricultural professionals, the purpose of the event was to introduce the youth to STEM (Science, Technology, Education, Math) fields that are not popular so that they may pursue those fields when they get older. 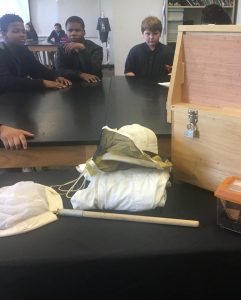 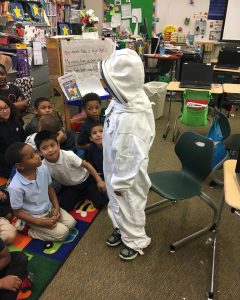 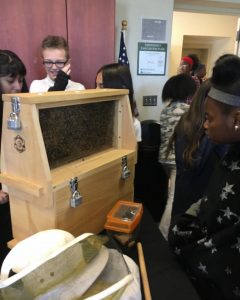 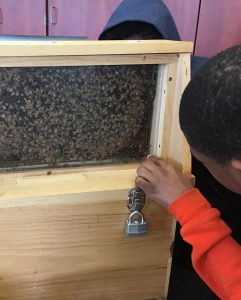 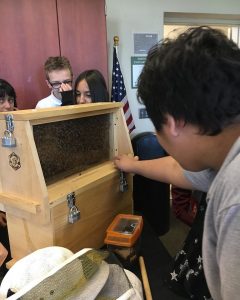 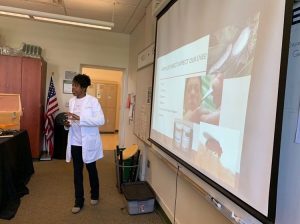 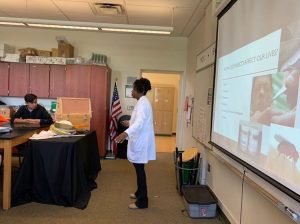 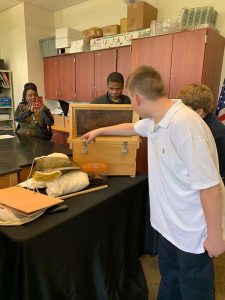 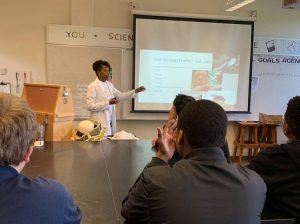 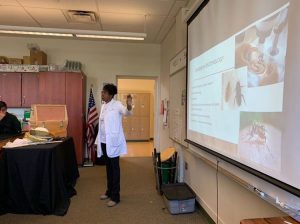 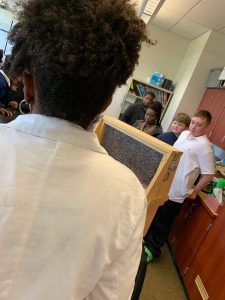 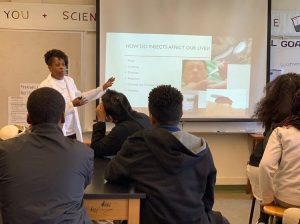 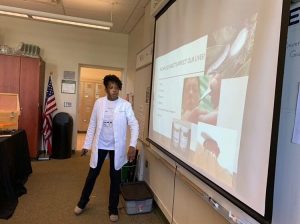 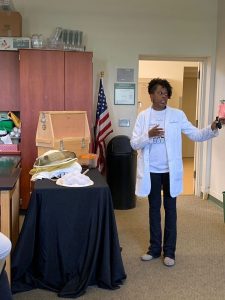 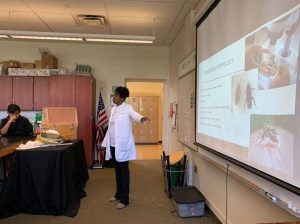 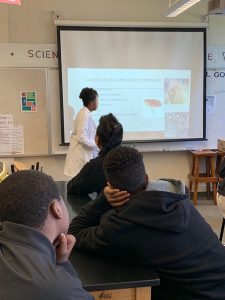 Since the inception of the project May 2, 2019 the beehives were plagued with many issues. Heavy rains during the month of May 2019 prevented foraging. Multiple hives had to be re-queened (5 of 7) at least twice. Hive 3 was the only one that seemed to build up the colony that was expected during a season. Hive 1 had a queen that was laying and had laying workers so it was full of drones. I replaced the queen but the hive never built up in numbers throughout the season. Hive 2, 4 and 5 all had to be re-queened twice. I initially bought 2 new queens but then I started allowing the hives to make queen cells and let them re-queen themselves. Hive 6 did not need re-queening. Hive 7 needed to be re-queened once. After dealing with these issues starting in May/June I decided I did not want to add the Bt spraying for the waxworms to the already fragile hives.

Bringing the project into 2020, 3 of the 7 hives did not make it over the winter. Due to COVID I was not able to purchase more hives because supply was limited. Now in 2021, I purchased 4 nucs instead of the packages of bees. I wanted them to have a stable start, so purchasing the nucs meant the colony has been established and the queen is already laying eggs and workers building comb. When I bought the packages it took time for the queen to settle in and workers had to start building out comb before the queen would lay. The purchasing of the nucs gave me a month head start.  I set the 4 new hives up in April 2021 and so far things are working out well. If the hives continue to stay stable I will attempt to spray the first hives with the waxworm Bt in June following the Hive beetle Bt in August.

Currently, my disadvantages with my project is working with an organism that is already in a fragile state. Environmental factors really affect the development and survivability of the honeybees. Just when you think you have one issue figured out something else comes up. The disadvantages have put me in a position to address some other issues in honeybee colonies. One is most honeybees that purchasers get up north come from southern states like Georgia that are in a different USDA zone than say Ohio. Taking the bees from one climate to another I believe is part of the issues. Establishing northern raised packages and nucs, I think would improve survivability because they would be adapted to living in this zone.

I do believe this will be a benefit to farmers/apiculturists and so I intend to further work on the project this year and report my findings back to SARE.

A future study I intend to work on is rearing colonies in the midwest/northern region (Ohio)  and having packages/nucs available for people that live in the midwest and northern states. I also would like to look at using certain species of predatory mites as biological controls for the varroa mite that infest hives.