Our operation consist of 50 beef cows and 50 breeding ewes. The grant focuses on grazing 20 sheep in the neighbors vineyard.

Grape vines are a perennial crop planted on average 8-12 foot spacing. Grapes require good air flow to reduce fungus, which means the space under and between plants must be kept as open as possible.  For erosion and soil health, Lac qui Parle Vineyards keeps their rows in a sod mix of bluegrass, fescue and dutch white clover, while the space directly under the grapes is either sprayed or cultivated to keep weeds down and air-flow good.  This project proposes to accomplish sod and weed management with sheep rather than with farm labor and inputs by rotationally grazing ewes using a New Zealand grazing muzzle that will restrict them from eating forage higher than ground level.  This will increase soil health with animal impact and manure, decrease chemical and fossil fuel inputs for the vineyard, and save money by reducing these inputs and harvesting the cover for forage. Finally, it will build community by neighbors working cooperatively together to improve their management and profitability. 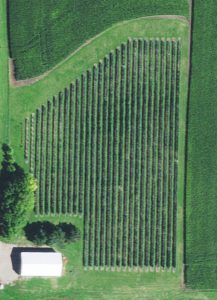 Three acres of the vineyard will be fenced with a perimeter and cross electric net fencing into 4 paddocks to ensure sheep stay in correct location and prevent predators (coyotes) from attacking. There is a water tank in each paddock.   A portable corral will be used to pen sheep when rotating sheep and if the grapes must be sprayed with a biologic (they have a 24 hour grazing restriction).  Daily observation of the grape vines and ground vegetation to ensure ewes are eating grass and not vines.  A grazing stick will determine how much forage is available and how much has been consumed and help determine the stocking rate of the vineyard.  Ewes will be weighed and given body condition score at the beginning and end of grazing period.

WineBaa muzzles allow ewes to graze the ground but when a sheep lifts it’s head, the muzzle prevents it from eating foliage and fruit.  Sheep will graze from May to August,  because in August the vineyard is netted to prevent grapes from being eaten by bird and the nets are dangerous to sheep.   The majority of the vegetation growth is complete by the end of summer so removing the sheep from the vineyard at this time would be appropriate for the goals.

The vineyard operator, will record hours being spent on traditional vegetation management (mowing, sucker remover, etc.) on the traditional managed portion of the vineyard versus the vineyard that will be grazed by sheep.  Iowa Custom Rates will be used to value traditional practices versus the cost of rotational grazing sheep over a 5 year period and compare which is more economical from a labor cost.

2021 Update-   We did not do any outreach since our project was not sucessful.   We learned alot of what not to do, but not what to do.

At this point, we are re-evaluating our objectives and hope to share our results from our reduced grazing project of 60 inch vines.  We were hoping to do a small trial during the fall of 2020 of the sheep to see if they are successful on 60 inch vines.  However, due to Covid 19, the trial did not happen.  We hope to do a small trial the spring of 2021 and try to record something to share on the internet.  If too much damage is being done, the sheep will be removed and we will share our results in an article.

8 Farmers reported changes in knowledge, attitudes, skills and/or awareness as a result of their participation
Lessons Learned:

When I returned home, I went to look at the project. Jon, Mark and I noticed that the vines in paddock 3 had no growth. We had not seen any grazing of the vines by the sheep and started to think it was winter kill of the vines (it was very common in the 2019 MN grapevines) or deer. I rotated the sheep back to paddock 1. The next day I went to observe the sheep again. It became apparent that the sheep were eating the new growth of the vines. The sheep were penned into the holding pen, loaded up and the grant was discontinued for the year.

The grapes had a big production setback after losing the 1st cycle of vegetation. However, the plants grew a second round of vegetation for the year but this caused approximately a 40 percent reduction in yield.

After much discussion, we decided the vines are too low at 42 inches from the ground to the lowest wire for the vines to grow on. More and more vineyards are going to 60-inch vines to increase air flow and ease of working underneath the vines. The Lac qui Parle vineyard has a few rows of 60-inch vines. We plan on running a few ewes for a short time on the 60-inch vines in the fall of 2020 (so they cannot eat growing or producing vines) for a few days to see if the can not eat the vines.  I hope that at this height the project works because we have seen good results from grazing the vegetation and controlling suckers.

The project did achieve ground vegetation control; we were rotating every 7 days along with the sheep eating the sucker growth from the grape vines. Vegetation samples were collected to determine the amount of dry matter intake, but due to ending the project early in the season, we were unable to determine the grazing capacity of the summer.  However, I did see an Avg. Gain of 6 pounds per ewe in the 22 days of grazing.

Soil Health: we collected the treatment and control samples in May of 2019; samples will be taken again in May of 2020 so we can see if any difference occured with around 7 to 10 days of grazing. 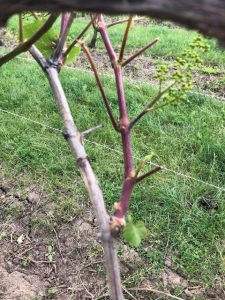 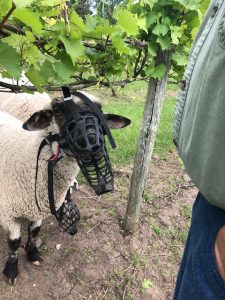 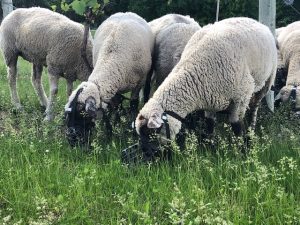 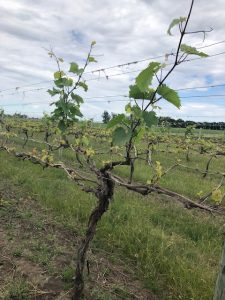 2021 Update We tried fall grazing which seemed to go better.   The sheep ate the grass but were successful at eating the leaves on the vines also.

Initially, when the sheep grazed the vineyard, the height of the vines were 38 to 40-inch.  This resulted in ewes eating the new spring growth of the grapes and caused loss of crop.   We went back the following fall and did a small grazing trial on vines that had a slightly greater height -- 5 ft is common in table grapes.  The sheep tended to not eat the vines and chose to eat the grass.  However,  they could still reach some of the leaves.

My conclusion on the project is this.  You must have a vine height of at least 5 ft to make vineyeard grazing viable.  Additionally, selection for small framed sheep  (i.e.: 150 lb) versus the large frame sheep (Hampshire and Dorset) at 225 lb would help elimimate the possibilities of ewes grazing on the vines.  There is more opportunity to research this project but a vineyard with tall grapes is needed and potentially a small-framed ewe or lambs would be a better option.

In my opinion, the Muzzles work in a more mediterranean or costal climate (IE California or New Zealand) during the dormant part of the winter.    The animals still have grass to graze but animals are probably not grazed during the peak growing season of the summer.     In the Northern climate our dorminate season is winter and would sheep would have little grass to graze.