Jord Producers raises yellow mealworms (Tenebrio molitor) for the wild bird, exotic pet, fish bait, and backyard chicken market segments. Jord has consolidated to one growing site in Nebraska that produces hundreds of thousands of mealworms each week. For every pound of mealworms produced, approximately two pounds of frass is generated. Frass is an all-natural, organic fertilizer, with a sand-like consistency. It's NPK is 3.1-3.8-2.3 and it contains chitin which has been found to help ward off plant pests. Jord sought to partner with two hop growers to understand the effectiveness of using frass as a natural alternative to fungicides and pesticides. Before receiving this grant, Jord Producers has had a main focus on sustainable production with a zero waste approach. The mealworms, their frass, the aged-out beetles, and even the unconsumed dried potato peels left by the insects are all sold or consumed by the chickens on the farm site. Jord also sources as much of their inputs/supplies as possible from local sources to reduce transport emissions.

Jord Producers and partner farmers will address a two-fold problem of finding a value-added market for mealworm frass being produced at the Jord Producers’ farms and improving production of hops crops on two Nebraska hops farms.  Pests including downy mildew and Japanese beetles can cause significant yield and quality loss for hops crops. Downy mildew is a major consistent problem for Nebraska hops growers. The chitin in insects is beneficial in stimulating a plant’s response to incite their own defense against pathogens and disease. As hops production in Nebraska, and the US, is quickly expanding to meet the market demand by niche brewers, growers are seeking natural, sustainable, effective, and economically viable methods to improve production. The team of farmers is seeking to evaluate the effectiveness of using frass in the hops industry for disease and pest prevention. If proven feasible, this could reduce dependence on synthetic fungicides and pesticides, improve hops production, and be a value-added by-product produced by Jord Producers’ mealworm farms.

The hop producers did weekly scouting and tracked their observations for downy mildew and Japanese Beetles on both the frass and the control plots. Japanese beetles are generally more of a problem for the hop growers than the downy mildew which did not present a problem the first season despite the very wet and unseasonably cold conditions for much of June. Downy mildew was more prevalent the second season of the trial. In both years, Japanese beetles were found in mid-June, peaking in mid-July, and lessening considerably by mid-August as is typical for their invasion with hop growers in Nebraska. The presence of beetles was considerably higher in the frass plants and did more damage to the leaves than in the control sections which were treated with pesticides. Both growers noted that the outside row the frass plots were in could have contributed to the higher presence of beetles merely based on location. Both growers noted that when the frass was applied as a “tea” and sprayed foliarly, the beetle presence was lessened. However, this could be coincident with the beetle presence reducing after peak mid-season damage. Josh observed that after spraying with the compost tea, the beetles lessened considerably, then came back strong a few days later.

In year one, at the Christensen Hop farm, Josh noted more beetles per plant during the high season on the control compared to frass plot, despite three different applications of pesticides on the control plot.

In year one, both producers’ crops were plagued by unseasonably cool early summer weather, flooding, and Midwest Hops sustained hail damage, as well. Additionally, Midwest had considerable deer damage to the outside rows of both the frass plots and the control plots. Midwest hop plants (both control and frass) failed to reach top wire.

Despite the damage from the beetles, both growers noted healthy looking plants with good foliage and cones. Other than the beetle damage to the top leaves, there was not much notable difference between the appearance of the plants in frass and control groups.

They also completed yield comparisons and sent samples to the lab for testing. See the yield and analysis results in the tables below.

In year two, the team decided to double the frass application amount to see if it would make a difference. Largely, the frass was applied dry before a rainfall.

Unfortunately, the data did not indicate effectiveness of the frass in preventing or reducing the impact of Japanese Beetle and Downy Mildew on the two plots. In addition, average yield loss on frass plots compared to typical fungicide/pesticide treated plots was 16%. The harm from the Japanese Beetles is suspected as the main reason for decrease in yield between the plots. This could equate to more than $2,500 per acre loss.

When estimating the cost per acre of using frass applied in the manner for this research (sprinkled on dry vs mixed with water for a drench application), cost is nearly double the typical fungicide application costs.

As far as the lab results there is a difference in the quality of hops from the frass plot and conventional.  The two main numbers most brewers look at when analyzing hops is the Alpha acid, which is the bittering component and Beta acid, which is the aroma component.  If both samples are converted to 10% moisture the Alpha Acid for frass is 9.02, and conventional is 10.38.  This is about a 14% difference.  So, the conventional hop would produce 13% more bittering value than the frass hop.  This is somewhat significant if brewers are using the hops for bittering.  The Beta numbers are closer, 2.58 frass and 2.81 conventional.  About an 8% difference.  This may or may not be noticeable between the two.  Obviously, the conventional hop would have more aroma potential, but at an 8% difference it would probably not be all that noticeable to a brewer using these as aroma hops.   In year two, the lab results were much closer with only negligible differences between the frass and nonfrass plots. 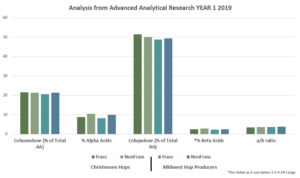 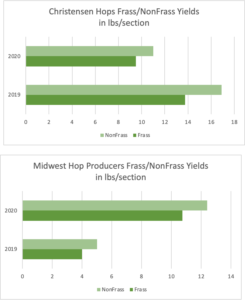 Because of the unfortunate weather conditions (lots of flooding at the hop growing sites) and lack of any results during the growing season during year one, field days were not planned nor results shared this first year. However, the project team hosted a team with USDA SARE for a site visit in July to discuss the project and see the progress.

In year two, due to COVID 19, the team amended the outreach to be a video that was pushed out to social media. The video was filmed during the 2020 growing season and finalized after the yield and oils results were in. This was shared on FaceBook, the Jord Producers newsletter, YouTube, and Instagram. All three farmers were tagged. The year two video reached 584 with 53 engagements (as of 2/27/2021 – it was posted on 2/26/2021). Jord Producers created an informational brochure regarding frass and has done some social media posts regarding the project with the post noting the USDA SARE visit having Jord’s second highest reach (1,600+ reached) and click rate via their social media.

Unfortunately, results were not as favorable as hoped. Re-adjusting the application rate and method and perhaps relocating frass-applied plots (more protected inside rows) may help improve the yield in the frass-applied areas. Other crops, especially those in more controlled settings (like greenhouses) may respond better.