Three Heart Farm is an 80-acre organic operation producing organic free-range chicken eggs, hay, heirloom garlic, apples and honey. The farm has been operating since 2006 and was also organic during the preceding five years. Since 2006, organic weed control techniques have been utilized with hand weeding and mowing. Natural grasses and clover are always encouraged to reseed.

Chicory has grown in Lawrence County, South Dakota since at least the late 1800’s. Originally grown by European immigrants, chicory seeds were transported across the prairie for landscaping and to grow crops ultimately harvested into homemade chicory root coffee. Today, chicory is a cash crop in other areas of the country and the root is ground for human consumption in coffee, cereals, and nutrition bars.

From 2001 – 2018, Lawrence County, SD experienced nine years of extreme drought or below-normal precipitation. Chicory is drought tolerant with a deep tap root. In 2019, chicory was placed on the Lawrence County, South Dakota, noxious weeds list. In the valley where Three Heart Farm sits, the weed board’s concern is that the broad leaf plant is not native to the area and competes with other forages. Listed as a noxious weed prohibits the sale of hay containing seeded chicory. Two of three adjacent neighboring farms and ranches have annually applied post­ emergence herbicides which has limited effectiveness. The third neighbor does not apply herbicides. Instead, he attempts to control his chicory with cattle grazing which is also minimally effective.

Three Heart Farm is an organic setting where alternative sustainable organic methods can be researched as positive alternatives to continuous ineffective herbicide applications. Our project approach is to research a variety of organic weed control strategies, demonstrating the most advantageous option(s) to sustaining the integrity of the prairie while meeting the state requirements of preventing noxious weeds from seeding.

Chicory is a two year plant with one long taproot. The plant spreads via seed, so the ultimate goal of the project is to control seed production. Specific mowing and native grass seeding practices were performed in 2019 and 2020 to compare results for more effective and efficient control of chicory. In 2019, 8 plots were identified. Each plot was flagged and then cut at different heights and intervals throughout the summer. The cutting frequency ranged between every two to four weeks. Additionally, in late 2019, sections were no-till seeded with native prairie grasses. The plots were seeded with Millborn Seed Economy Dryland Pasture Mix,  consisting of 25% each Pubescent Wheatgrass, Intermediate Wheatgrass, and Crested Wheatgrass. Additionally, the blend contains 15% Smooth Brome and 10% Forage Perennial Ryegrass. Since chicory is a biennial plant, the results will be most definitive as time progresses. The strongest lesson learned from 2019 is that the plots which were cut frequently and at low levels did not kill the chicory plant and a negative side effect was prairie grasses being weakened by frequent cutting.

The first map represents the ten plots which were cut with a sickle at following heights and intervals in 2019:

Plots 1-5 were no-till drill seeded and in 2020 the areas did not show significant prairie grass growth during the spring and summer of 2020 which was disappointing because the hope was that healthy prairie grasses may crowd out the chicory.

Plot 1, 2 and 3 were no-till drill seeded and cut at 8 inches and were not raked or baled. Plot 2 and 3 spent most of 2020 in extremely saturated soil conditions due to spring runoff. Chicory flowers on Plot 2 was first identified on July 2, 2020 and the plot was first cut on July 9 to prevent the plot from going to seed. Chicory flowers emerged later on Plot 1 and Plot 3. They were first cut on July 21, 2020. 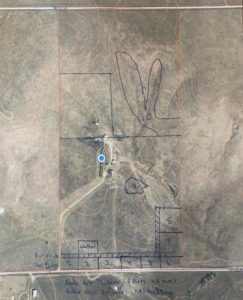 Year 2 results varied depending on the technique used in year one. Results showed that the least effective cutting technique for controlling chicory was on Plot 2 (cut at 8" every 4 weeks beginning mid-June), and Plot 6, (cut at 4" on two occasions in 2019 just as the chicory was flowering. The plot was cut but not raked and baled.)

The research shows that controlling chicory by cutting fields frequently before chicory flowers emerge is not more effective than cutting fields upon flower emergence at a higher level which allows other grasses to naturally reseed.

Three Heart Farm will use this research to modify chicory controlling techniques. Fields will be initially cut for hay production just before chicory flowers go to seed. Thereafter, specific areas of ranch will be cut at 8 inches when chicory regrows. Through this research, it is logical that with fewer chicory flowers turning to seed, the existing chicory plants with die off every two years and fewer seeds will produce fewer plants in the future without using herbicides.

Created and maintained social media page where project goals, methods, and outcomes are communicated and shared publicly. Posted at significant intervals of the research, posting photos of the development of chicory plants under various stresses. Shared practices and lessons learned while offering viewers to contact with questions. Ironically, a few individuals were interested in growing chicory rather than eliminating it so they asked about the best techniques to grow it.

1. When frequently cut, throughout the season, chicory adapts by flowering at progressively lower stalk heights. The cutting resulted in fewer flowers per plant but did not seem to deplete energy reserves (the root) during the first year of the project.

Adaptation for 2020: Adapt cutting heights to highest possible to prevent flowers from maturing while maintaining minimal impact on native and sowed grasses. Explore and refine optimal cutting periods and heights.

2. Chicory does not like to compete with other tap-root plants.  This year, areas of dense clover thrived, preventing all but a few chicory from emerging within these plots.

Adaptation for 2020: Avoid cutting areas of dense, native clover growth.  Hand-weed within these plots as needed.

3.  Chicory does not like to grow in thick cover. Test-plots where native grass was sickle-cut but not raked kept chicory from growing until late in the season.

Adaptation for 2020: Identify test plots to continue cutting and not raking.  Identify potential areas not needed for hay production for the same.

1 Grant received that built upon this project
Return to Project Overview
Any opinions, findings, conclusions, or recommendations expressed in this publication are those of the author(s) and do not necessarily reflect the view of the U.S. Department of Agriculture or SARE.