Ripple Rock Fish Farms LLC began almost 8 years ago, with a 3,000 gallon system, producing about 1,500 lbs of tilapia in our first year. As we have gradually expanded our operations, with many successes and failures along the way, we have learned that success in this business boils down to just a few variables: water, waste and oxygen. Today, with production levels topping 40,000 lbs., we continue to closely monitor water, waste and oxygen. Our ever-present goal is to grow more tilapia in less time.

The driving force behind any successful RAS is oxygen.  If oxygen levels can be maintained, then waste is neutralized aerobically, feed levels are maximized, fish densities are increased and higher growth rates are achieved.  The solution seems obvious: increase the oxygen levels in the water.  However, liquid oxygen, used by larger operations, is simply too costly to be implemented on a small farm.

The partners on this project seek to improve oxygen transfer rates using cost-effective methods including:

This innovative research will broaden traditional RAS methods.  Typically, low pressure systems appropriately designed for small farms, cannot support aggressive oxygen transfer methods.  It’s no wonder that 90% of small scale fish farms fail in the first 5 years of operation. We seek to assist small farmers; stabilizing their presence in this potentially sustainable industry.  Without a doubt, recirculating aquaculture is ecologically sound and socially responsible. The challenge is to also make it economically viable.

RAS systems are constrained by the amount of oxygen in the water.  Oxygen in the bioreactor supports the nitrification process and allows feed levels to be maximized. Traditionally, large producers utilize liquid oxygen to keep up with demand.  When production crosses the line of aeration alone large growers use pure oxygen. However, this solution is cost prohibitive to the small scale farmer.

The farmers will conduct trials using a Home Health Oxygen Generator to address the need for efficient oxygen transfer, affordably and sustainably.  The team will combine their experience to design, test and evaluate the use of a Venturi Injector, and Oxygen Saturator, to transfer oxygen from the generator into the water.

Baseline oxygen saturation levels will be measured prior to installation. Once the design specifics have been determined and parts are ordered, equipment will be installed at Ripple Rock Fish Farms on a 22,000 gallon, grow-out system.  Beginning fish densities will be approximately 0.25 lbs/gallon. Over a period of approx. 4 months, densities will increase to 0.50 lbs/gallon and 0.75 lbs/gallon, thereby pushing oxygen saturation levels to test the sustainability of this method.

Based on the results, adjustments will be made to the delivery system and trials will begin at the remaining two fish farms, sequentially.  By testing the design on three farms, we intend to prove that the research is not system specific and will benefit a broad range of small fish farms.  A research project of this nature has the potential to benefit small farms in a substantial way. Farmers will be able to feed at higher levels, producing fish in a shorter time, and realizing increased profits and better cash flows that will sustain their aquaculture business.

The focus of this grant is on oxygen.  Specifically, we sought to address how can we more fully saturate the water with oxygen, rather than seeing the oxygen bubble up to the top of the tank, and escape into the air?

The desired outcome was to saturate the water with oxygen as it entered the raceway.  With a “W” shaped pipe flow, retention time was increased, which, in theory, should have super-saturated the water.  However, this didn’t work.

Results -  Outcomes were measured by the oxygen readings in mg/L as follows:

Steps involved in the second attempt were as follows:

An oxygen saturator was connected to the header pipe and replaced the former "W" configuration (see photos below).

This system operates as follows:

With the installation of the venturi system and the saturator, oxygen levels have increased 73% from baseline data (January - April).

Combined Results for all 3 Farmers:

Now that the venturi system and saturators are installed at each location, we have pictures and design plans to share.  In addition, videos will be posted as follows:

-  Outcomes were shared with the Ohio Aquaculture Association/OSU extension (primarily farmers and educators) as a presentation on 2/20/2021 in a virtual format.  You tube: 3,537 views

- Outcomes were shared as part of a virtual farm presentation for the Great Lakes Aquaculture Days 2021 on 9/2/2021.  This is a collaborative composed of Sea Grant extension educators, science communicators, fisheries, biologists, economists, and aquaculture specialists from the Great Lakes Region.

The project has now come to completion, as Freedom Fish Farms and Stagecoach Fish Farms have installed the venturis and saturators to their systems.  All three farms report an increase in oxygen saturation levels, resulting in increased loading densities in their respective tanks.  Production results for Ripple Rock Fish Farms are as follows: 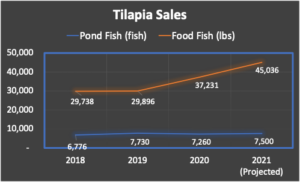 The 3 farmers above have also shared their successes with others, resulting in at least 3 other fish farms, implementing this technique for increasing oxygen saturation levels in a RAS system. 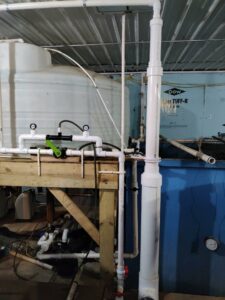 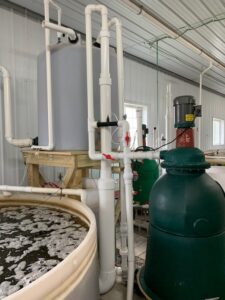 Perch farmer from central Ohio:
"After installing the systems we filled the tanks with pond water. One concetrator/venturi is hooked up to 3 tanks, and the other concentrator/venturi is hooked up to the other 3 tanks. Although, the 6 tanks are not the same size. 3 are approximately 2k gallons and the other 3 are approximately 800-1k gallons. After half a day of running one concentrator and not the other, one of the sets of tanks had approximately 4 mg/L higher than the other 3 tanks. Approximately 7.5 mg/L compared to 11.5 mg/L. "
Tilapia farmer from eastern Ohio:
"I installed the 2 venturis after my sump pumps and before my bio tanks, installing the 2 venturis in a way that I can conrol what direction the sturated oxygen goes in the system.  What I have noticed is the fish are able to eat more and more often. "
Recommendations:

Use this oxygen transfer method in recirculating aquaculture systems that struggle to maintain adequate O2 levels for healthy fish production.  This is much more economical than liquid oxygen and very effective.

Now that oxygen is higher, and densities have increased, the resultant challenge is solids removal.  In aquaculture, we just keep jumping over the next hurdle.