For over ten years, Drew worked in the oil industry where he became a proficient mechanical engineer. By working in an outside industry, he found and created opportunities to become involved with ranching on a full-time basis. He now manages a cow-calf and small sheep operation along with 970, 110, 240 and 160 acres of native, improved pasture, winter forage/hayland and CRP, respectively. Unfortunately, much of his land was abused prior to his management. Farming practices and severe over grazing left the soil to erode by wind and water. He has worked with NRCS, USFWS, ND State Water Commission and others to transition from a 3-cell pasture rotation relying on dugouts for water to a 20-cell rotation with miles of pipeline, multiples wells (solar and conventional), dams for wildlife, cover crops for bees and soil health, and miles of trees. He continues to work closely with these groups to address resource concerns and make long-term improvements in an effort to revitalize the land and improve wildlife habitat.

Erin has spent the last few years working off the farm to advance her knowledge of production agriculture and is in the process of transitioning back to the farm and ranch. Every position of employment has contributed to her overall understanding of natural resource management. She has also earned a M.S. and is working towards a Ph. D in Range Sciences which helps her to not only design experiments, but also interpret and integrate research from the areas of cropping systems, farm economic management, animal systems, and natural resource management. Currently, she own a small herd of cattle and sheep and manages 340 acres of cropland. She is working to build soil health by managing the land as a pollinator cover crop that will be converted to a perennial system.

This project was designed to address the resource concerns of land that had been historically farmed with no inputs and depleted to a point of no longer being productive.  To rejuvenate the land and demonstrate how sustainable agriculture can be adapted to fit an operation, project coordinators used multiple species of livestock and bale grazing.  This management strategy allowed us to demonstrate a practice that is ecologically sound, profitable, and socially responsible.  Research from multiple universities has shown that bale grazing can increase nutrient capture, cycling, carbon sequestration, and more.  It has been shown that it can reduce the direct costs of labor, machinery, maintenance, fuel and fertilizer costs.  Additionally, multi-species grazing has the potential to improve forage utilization.  What research hasn’t been able to show is the real world application that combines all areas of focus and is available for producers to see the benefits and challenges of adopting a sustainable practice like bale grazing with multiple species.  As project coordinators, we feel a social responsibility to provide others with the opportunity to ask questions and consider options for their own operation.  It is through projects like this that sustainable agriculture will become a term that is better understood and more readily adopted.

Multi-species bale grazing was planned to occur across 155 acres of land that had been historically mismanaged by a previous landowner to a point of soil depletion. The project was designed to address resource concerns and demonstrate how sustainable agriculture can be adapted to fit any operation. A planning committee met during the spring of 2020 and 2021 to discuss project objectives, activities/timeline, and outreach efforts. A committee meeting will also be held at the end of the project to assess and reflect on the project.

During the summer of 2020, Drew and I began to modify the existing fences which were built for cattle management. Perimeter fences were modified by adding an electric high tensile wire to what was already a 2-wire electric fence. Due to the amount of infrastructure changes that will be required to successfully incorporate sheep, bale grazing only occurred on a portion of the project area during Year 1. As more fences were modified during the second year, bale grazing was expanded to the additional project acres.

Approximately half of the budgeted sheep were purchased during 2020 and the rest were purchased in 2021. Drew and I chose to do this because we knew that it would take awhile to make the necessary infrastructure changes to successfully train and incorporate sheep. Upon purchase, the ewe lambs were quarantined to the corral for a week or so and then turned into a training pasture where they were introduced to electric fence. Our interest in hair sheep was because we wanted to minimize the labor involved with managing the animals and we also thought they might respond to electric fence better.

During the summer of 2020 and 2021, hay was harvested both on-site and from nearby fields to support bale grazing on the project area. The amount of additional hay hauled to the site was reflective of the number of animal units that were fed through the winter months. During 2020, the sheep bale grazed alongside 80 bred heifers and 50 bred cows. During 2021, the sheep bale grazed with 80 bred heifers and 20 bred cows.

A benefit of incorporating sheep is that manure distribution is more evenly spread across the field and soil compaction is limited.  Additionally, cattle and sheep do not share parasites which in turn breaks the lifecycle. As opposed to cattle, sheep are less selective in browsing near manure deposits which results in improved feeding efficiency.  Soil health was monitored by collecting samples before, during and after project completion to monitor nutrients, biological activity, and residue.  Photos were also taken throughout the project to use for observation and outreach purposes.  Results were evaluated.

Bales were distributed and temporary fence was installed at the areas designated for bale grazing during the late fall of 2020 and 2021. Sheep and cattle rotationally bale grazed across 20 acres of land during the winter of 2020. After rotations had been grazed, bales from nearby stacks were distributed across the field again and again. During the first year of multi-species bale grazing, Drew and I were hesitant about how sheep would respond to minimal fence infrastructure and training, so we kept them relatively close to the yard where they could be monitored. Additionally, we wanted to create a high amount of impact across these 20 acres as this is where the soil is most unproductive and fragile. Bale grazing through the area over and over, also allowed us to see areas where more organic matter and grazing impact was necessary.

During the winter of 2021, we were able to expand our bale grazing impact to approximately 155 acres. Drew and I felt comfortable with this expansion because the sheep continued to respect the minimal changes to fencing infrastructure. Additionally, we wanted to expand the soil health benefits of bale grazing to other acres that could benefit from this type of management. Temporary fence materials were used to "strip graze" through the designated bale grazing fields.

Livestock performance was evaluated with each grazing rotation by assessing the animals body condition. The assessment was used to determine the animals nutritional status. North Dakota experienced an extensive drought during the summer of 2021, so forage production and quality was limited. To make sure that the animal's nutritional status would be maintained, mineral lick tubs were offered ad libitum. The lick tubs were helpful because they allowed us to more efficiently utilize the forage that was being offered to the livestock.

Litter depth was assessed during the spring of 2020 and 2021, following bale grazing. A bale was randomly selected from each grazing section and measurements were performed at 0, 10, 20 and 30 feet in each cardinal direction. Photos were also taken throughout the grazing period and into the following spring for observational and outreach purposes. 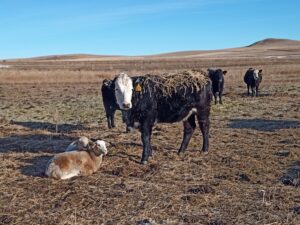 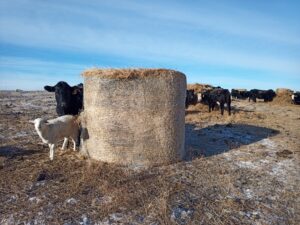 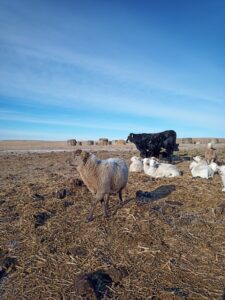 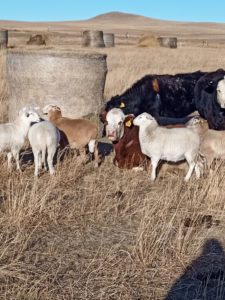 Samples were collected before, during and after project completion to monitor soil nutrients, biological activity, livestock performance and bale grazing residue.

Composite soil samples were collected from the bale grazing areas, as designated on the project map. It is important to note that the 20 acre area had been bale grazed multiple times from 2018-2021. Whereas, the eastern most acres of the project area had not been bale grazed prior to 2021. For this project, the Haney test was collected during the fall of 2020, fall of 2021 and spring of 2021. Results and conclusions from soil testing will shared once this information is available.

Drought conditions were persistent in North Dakota during the summer of 2021. Research suggests that sampling in the fall, following dry conditions, may result in lower than expected soil test results for phosphorus, potassium, and pH. From August - November 2021, however, the project area experienced nearly 10 inches of rain. Literature suggests that sandy, light-colored soils have a limited ability to hold nutrients. Potassium, nitrogen and sulfur, in fact, are the most mobile nutrients and subject to leaching. Therefore, producers should interpret those soil-test results with caution.

Livestock performance was evaluated with each grazing rotation by assessing the animals body condition. The assessment was used to determine the animals nutritional status. The winter of 2020 was unseasonably mild and the snow was minimal so the animals performed well and maintained great body condition throughout the bale grazing season. Additionally, the forage that was harvested the previous season was of good quality and helped to maintain livestock performance.

North Dakota experienced an extensive drought during the summer of 2021, so forage production and quality was limited. To make sure that the animal's nutritional status would be maintained, mineral lick tubs were offered ad libitum. The lick tubs were helpful because they allowed us to more efficiently utilize the forage that was being offered to the livestock. Additionally, the livestock were able to better maintain their body condition and performance in the bale grazing system.

Litter depth was assessed during the spring of 2020 and 2021, following bale grazing. A bale was randomly selected from each grazing section and measurements were performed at 0, 10, 20 and 30 feet in each cardinal direction. Photos were also taken throughout the grazing period and into the following spring for observational and outreach purposes.

In the 20 acre field, where bale grazing occurred multiple times throughout the winter of 2020, the litter depth was spread relatively evenly across the surface at a depth of 0.5-1". It is important to note that the winter of 2020 was mild and very little snowfall occurred, so livestock had continued access to the residue. During the spring of 2021, it was observed that plants had little to no trouble growing through the remaining residue.

While bale grazing and the incorporation of multiple species has shown benefits, neither management practice has been widely adopted. This project provided both a demonstration of multi-species bale grazing to producers, but also included many outreach efforts. To disseminate information about the project, events and activities, we utilized local networks, social media and posted flyers. Tapping into local networks (NRCS, SCD, ND Grazing Coalition, etc.) was the most effective way to reach our selected audience of farmers and ranchers. 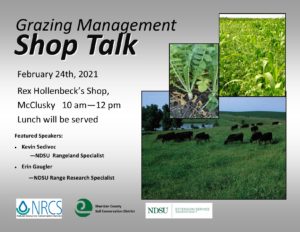 15 Farmers reported changes in knowledge, attitudes, skills and/or awareness as a result of their participation