The farm aims to be a beautiful, organic urban farm that creates a place for neighborhood residents and businesses to connect with their food and with each other. Westport Commons Farm will generate and demonstrate the social, economic and environmental value of urban agriculture to a vital and thriving community.

Pests can completely decimate organic curcurbit production, removing a staple cash-crop for organic growers.  While the use of trap-crops to attract common pest insects is widely studied, the use of pesticides to control the pest insects once attracted, or the need to replant the trap-crop over and over again as the pests destroy it reduces efficiency and sustainability of the trap-cropping system.  Here we explore the use of the domesticated Japanese quail (Coturnix japonica) to eliminate pesticide and replanting with the added benefit of providing meat, eggs, and fertility to the small organic operation.

The quail will be housed in 5'x5' pens on the edges of the cash-crop area. The trap-crop will be planted within each pen.  As the pests are attracted to the trap-crop, the quail will eat them.  While others have experimented with the use of chickens in similar applications, the quail have the advantage of being small, less destructive, and less prone to eat vegetation.  Quail can be housed continuously with the trap-crop, eliminating the need to use pesticides or to constantly replant plants damaged by pests or larger fowl.  This system will be more profitable by reducing inputs, time in the field, and by maximizing production of cash-crops and other marketable products.

We selected Japanese quail for our pest control subject, because they will devour insect pests without damaging the trap-crop.  Unlike chickens, they don't consume a lot of vegetation, they don't scratch significantly, and they aren't large enough to trample the crop.  They also don't take up much space, and are ideal for an urban setting such as ours.  Finally, they produce marketable eggs throughout the growing season, adding value beyond bug eating.

The quail pens will be arranged according to research conducted by Jaime Pinera at Lincoln University who showed that a small number of trap-crops arranged at either end of the cash-crop row was sufficient to gain adequate protection for the cash-crop.  Our rows are approximately 200' long and 5' wide with paths on either side.  Our arrangement will utilize four quail pens placed at the four corners with three 200ft rows between them.  Once the cash crop rows are planted, the paths will be planted with buckwheat for weed suppression, and to attract beneficial insects for pollination and depredation of pests.  Cash crops will include various curcurbit crops such as zucchini, melons, and winter squash.

Within the 5'x5' pens, about two weeks before planting the cash crop, we will plant three blue hubbard squash plants with a goal, after thinning or attrition, of one plant per pen.  The two weeks of lead time will allow the trap crop to gain some size and begin to attract the first wave of pests before the cash crop is planted and established.  It will also allow the plants to gain some size before the quail are introduced to insure the plants aren't trampled.

We will conduct daily checks of the quail to monitor their food and water, their health, their impact on the trap crop. We will observe their behaviour in the pens and hopefully observe them eating pests.

We conducted tours of the farm, and talked about the SARE projects with various people throughout the season.  People of all ages visited the quail cages, and learned about their role in the project.  We posted many social media posts on instagram and facebook to teach our followers about the project.

We hatched the chicks at home in the incubator from eggs we purchased from a farm in El Dorado, Kansas. 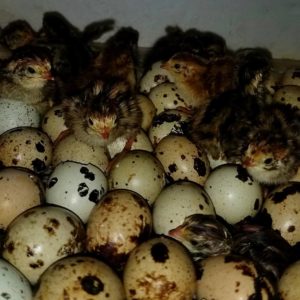 Westport Commons farm is situated in the center of Midtown Kansas City on the site of the Westport Junior High playing field.  We lined the quail cages up along the rows of squash, so that they would be close to the trap crop area. 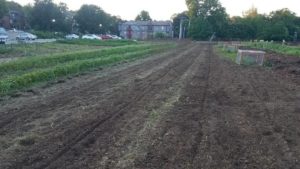 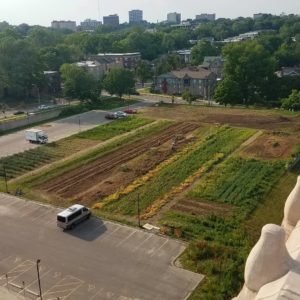 The whole group of quail were raised in one cage until they were mature, while the other cages were growing on the trap crop of blue hubbard squash.  At around 6 weeks of age, the quail began laying vigorously, and the eggs were collected daily. 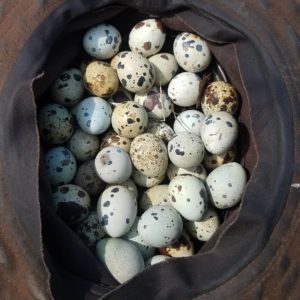 In each cage we planted two blue hubbard squash to attract the common curcurbit pests.  The bottom of the cage around the squash was covered in leaves to keep weeds down, and provide carbon for the quail manure.  Two weeks following this planting, we planted two rows of cash crop, approximately 400 row feet.

We waited until the squash plants were very large and robust, so that they quail, theoretically, wouldn't be able to damage them. We also waited until we saw the first signs of pests, such as vine borer adults or squash bug eggs.

These are the actual squash growing inside the pens: 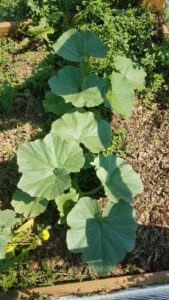 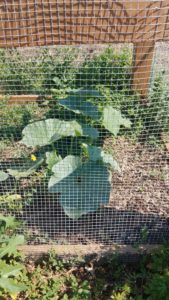 When the pests began to arrive, we introduced the quail into the cages with the blue hubbard squash.   To our surprise the quail RELISHED the flavor of the squash vines, and ate them aggressively.  The large vines had no effect in deterring them.  They seemed to actually prefer to eat the large, thick vines.  Within a couple of days, the trap crop was destroyed.  We chose the quail because we thought their diminutive stature, and their light scratching would prevent them from harming the squash plants.  This proved to not be the case at all.  They were just as destructive, if not more destructive, to the squash than the chickens in the previous SARE grant we researched.  These are the squash after one day with the quail: 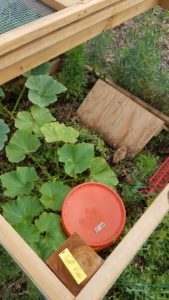 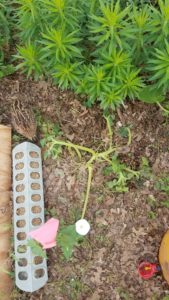 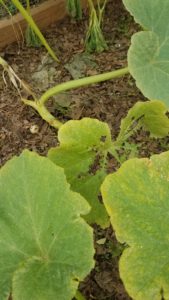 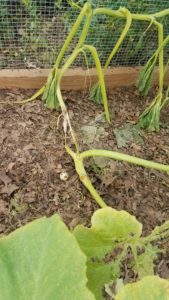 Despite this major loss, we found that the presence of the quail in the cages with the trap crop did lessen the effect of pests in the garden.  This happened for two reasons, in our estimation.  1.  Because the adults, babies and eggs of the first generation of pests were already present when the quail were introduced into the cages, and the quail ate them all, we think the population was girdled from the jump, and it took them a long time to get going again.  2. When we inspected the cash crop, if we found leaves that were covered in eggs or baby squash bugs, we would cut them off, and toss them to the quail.  Through this process we were able to keep 3/4 of our squash crop producing until frost killed them.  For that reason, I would say the quail did successfully act to control the pests on the site, although not perfectly.  With some adjustments to the design, we feel they would be effective for controlling cucurbit pests in an organic system.  I would suggest either planting rows of trap crop, and moving tractors with the quail over them, or designing a cage with some sort of inner wire to prevent the quail from eating the vines, while still allowing the bugs to move in, and past the quail.

We have not heard of anyone adopting this practice as of yet, but we did hear from many farmers that it gave them ideas, and got their wheels spinning to come up with similar solutions to pest problems.  We produced hundreds of quail eggs, and hundreds of pounds of squash from this project. Because quail begin laying eggs at about 7 weeks of age and can produce on average 300 eggs a year, we estimate that by adding a flock of 15 quail to a farm to assist with pest management, you could produce roughly 4,000-4,500 eggs a year which sell for about $5/dozen. Conservatively, 15 laying females would add roughly $1,800 to your annual farm income. The greater economic benefit to us was the increased yield in summer squash. We estimate that we were able to grow about 1/3 more squash from the year before. It was also a lot of fun having the critters on the site.

One other potential source of income raising the quail the way we did (by incubating fertilized eggs) is to sell the male quail that will be culled from the population. We donated our culled males, but we estimate that we could have charged $10-$12 for each unprocessed, whole bird. 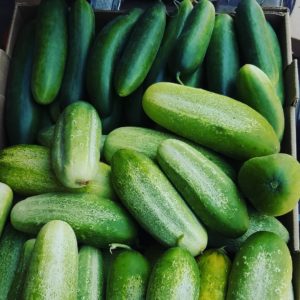 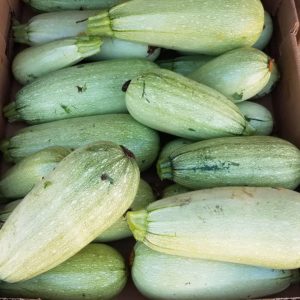 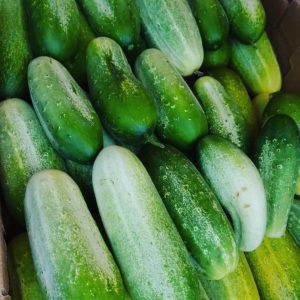 Toward the end of the season, we experienced significant loses due to predators digging under our cages.  We had a very clever fox who had a lot of nice quail dinners.  In the future I would suggest more secure caging that takes into consideration the numerous predators common, even in the city. At the very least, any future cages we try will be enclosed with wire on all sides and we would also consider the additional measure of adding solar-powered electric livestock fencing. Another alternative that would add labor to the project would be to house the quail in a coop at night and on days when we won't be on the farm.