MaHoney Bees and Queens LLC was founded in 2019 as a business specifically focusing on honey bee breeding and instrumental insemination. Although this is a young company, we are operating a satellite breeding population of specialized honey bees within a larger, commercial bee business founded in 1979 (Klett Beekeeping). Klett Beekeeping is a small, family-owned business and runs about 2,000 migratory colonies between Central North Dakota and Southeast Texas, specializing in queen cell production, honey production, pollination and other bee products on a limited scale. MaHoney Bees and Queens is fortunate to be able to operate our breeding program within Klett Beekeeping’s larger business, because it allows us more resources (bees, bee yard locations, equipment, trucks etc.) and enables us to keep selecting for and breeding from desirable traits in the population without worrying about basic infrastructure needs. While both companies make an effort to employ sustainable practices whenever possible (monitoring for pests and disease, using integrated pest management tactics to control these pests and diseases, and searching out areas to keep the colonies with abundant, clean forage), the amount of time and labor involved with actual monitoring and record-keeping does not offer immediate economic return. This SARE grant has been used (in part) to help offset some of those costs.

Commercial queen bee producers are the cornerstone of the bee industry.  These producers sell thousands of queens to large scale migratory beekeepers as well as to small scale beekeepers. The breeding stock used by commercial queen producers influences the quality of honey bees across the country, as they provide stock for beekeepers that supply honey bees to pollinate high-value crops and produce honey and queens, as well as supporting smaller, local markets.

Commercial beekeepers rely on certain types of bees to contribute to the success of their businesses, both economically and genetically.

Our insemination project will focus on the Carnica subspecies of bee that is proven to be cold weather acclimated, gentle, productive, tolerant of pests and diseases, and is highly sought after by both producers and their customer base.  This project is designed to address the substantial demand for this type of bee.  There is currently a great lack of availability for consistent and sustainable Carniolan breeding stock.  The project goal is to establish, maintain, and control a viable breeding population on a commercial scale.  Producing healthy Carniolan breeding stock for the commercial producer and their customers will enable increased profits and significantly contribute to the overall diversity of our national honey bee population.

Queen cells will be produced from pooled Carniolan breeder stock from the previous year and introduced into 100 nucleus colonies in early spring 2020 in Southeast Texas.  Nucleus colonies will be tagged with breeder source information, and checked for a mated queen 28 days later.  “Queen right” nucleus colonies will be marked with an identifying stencil on the outside of the box and prepared for transport to North Dakota in June, 2020.  Upon arrival in North Dakota, they will be moved to unique and isolated locations for further evaluation and potential drone collection.

These 100 nucleus colonies will undergo a 6-month selection process following methods outlined in the Ontario Introductory Queen Rearing Manual (2014). Our evaluation metrics will track the quality of preferred attributes by assigning a score of 1-5 (5 being the best performance) for each potential breeder based on temperament, productivity/spring build up (MaHoney Score), color, and pest/disease prevalence.  An alcohol wash will be performed for each potential breeder to quantify Varroa mite levels

After high-scoring breeders have been identified, daughters will be reared from them and artificially inseminated with Carniolan semen.  These queens will be evaluated individually to determine their roles in the population and whether or not the metric criteria were met.

Other producers using this stock will provide feedback on field quality and have the opportunity to share their best stock with our program in the form of germplasm or mated queens.  This will be a dynamic and adaptable program. The process and results will be documented with photographs and written record-keeping to be shared later with the broader commercial beekeeping community through reports and presentations at professional conferences and other national forums.

Over the two year period covered with this proposal, I inseminated a total of 294 Queens (137 in 2020, 157 in 2021). By January 2022, I had selected out a total of 106 Queens to stay in the program as "Breeders." (See uploaded excel file). The number of breeders selected is 36% of the total number inseminated due to queen failure, death, or other culling from population based on the selection rubric (disease, color, temperament, mite levels). While this number seems low, there was a marked difference between the overall number of breeders from 2020 vs 2022. The number of breeders increased over the two years and the population became blacker in color through selection efforts. This was especially seen through drone collection for germplasm used in insemination (see picture). In 2020, I relied heavily on my F1 population for drones. However, by 2021 I was able to collect more than enough drones from my own inseminated breeder population. Additionally, the diversity of the breeder population is adequate, there are 24 different mothers represented in the current population with a varied assortment of drone sources. I expect (and hope), that the population will continue to grow over time, these first few years have been pivotal in establishing a base breeding pool to select from. 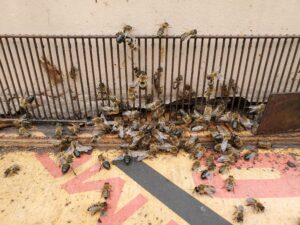 Record keeping plays a time intensive and important role in keeping track of the physical bee hives and their respective mother lines. I took hand written notes in the field and then entered them into an excel spreadsheet which I can access in the field through google drive (on my phone) if questions arise. In addition to tracking them in excel, I also tagged the hives with identifying stencils, allowing co-workers to identify which hives were part of the breeding program, and make placement decisions (for example; placing all of the hives in unique yards for specialized drone collection in future). While the tagging system was time consuming (hand spray-painting with stencils), it was successful and will likely be implemented in the future because of the flexibility/option of using different colors or shapes every year to represent different populations. For the two years in this project, I used blue 20's and 21's for the inseminated population based on the year they were inseminated, and pink 20's and 21's for my F1 daughter population.(see photos). 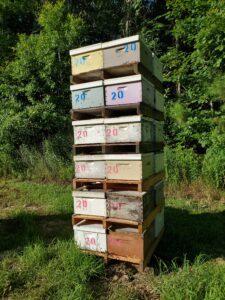 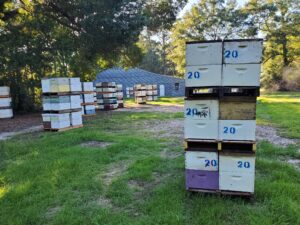 I was able to sell a handful of breeder queens to other beekeepers without any sort of target marketing. At the time of writing, I have more requests for them than I can supply. As my population becomes larger and more stable (my goal is 100 viable breeder queens in my own population consistently), I expect to be able to offer more up for other beekeeper's uses in future. 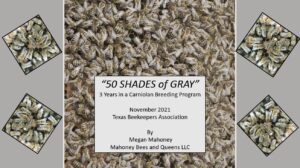 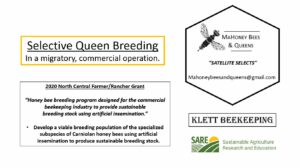 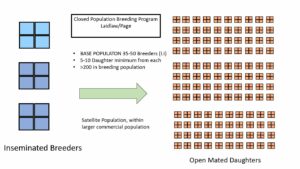 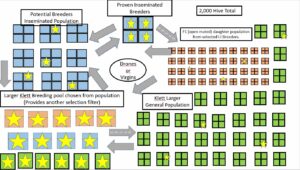 I shared our project through a local radio interview, ESPN 107. 1 AM in Jamestown. You can listen here:

I participated and presented in numerous online and in-person conferences including local bee clubs and state organizations, including Texas Beekeepers Association, North Dakota Beekeepers Association, New Mexico Beekeepers association (twice), Adaptive Bee Breeders Association, Austin Area Beekeepers, Illinois Queen Initiative, and FARRMS (Foundation for Agricultural and Rural Resources Management and Sustainability). More talks are scheduled for 2022! The number of people reached is a very conservative estimate. I also attended other professional conferences where I was not scheduled to speak, but was able to share my project with other colleagues on an individual level. See a few example PowerPoint slides (uploaded). 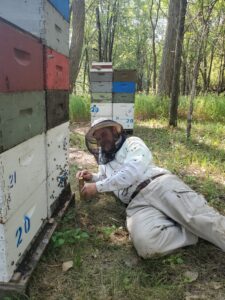 Establishing a specialized breeding population is not easy! It requires an incredible amount of time, labor, attention, and record-keeping. If you don't write it down, you will not remember!

Inseminate AT LEAST double the number of Queens you expect to keep. Based on my numbers, only 36% made it to breeder status. This was lower than my previous estimated number of 50%.

Late-Season inseminations are great for drone viability, however, require more colony maintenance to get the queens through winter.

Use other beekeepers in your area to your advantage; maintaining good relationships can open doors. I was able get permission from other beekeeping operations nearby to collect drones for augmenting my own population. For example, I collected drones from California (drones produced from CA queens) in North Dakota, without having to travel out of state. At the time, this was a decision made because of travel restrictions, however, in the long run is a great opportunity to add quality diversity to the breeding population. North Dakota beekeepers are managing their stock for honey production, making it easier to select colonies based on production value. Usually more supers (honey boxes) equals more drones which is reflective of a healthier, more productive colony in general.

This project would not have been possible without the using the existing infrastructure of an already established beekeeping business. The time it takes to select, inseminate, track, and maintain the breeding population is essentially a full-time job in itself. If I had to worry about beeyards, transport, equipment prices etc., the breeding program would likely fail. I would not recommend a project like this to a beginning beekeeper.

STAY WITH IT! A breeding program is not built overnight. 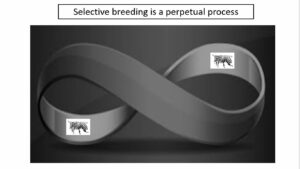 In a recent trip to California, I was fortunate enough to meet with other professional bee breeders, some of whom are operating successful, multi-generational family businesses.  It was a great opportunity to talk shop, share stories, and learn new methods.  Regarding bee breeding, my favorite quote from a long-time beekeeper was; "Select from the best, breed from the best, hope for the best."  It is nice to know that there are other beekeepers out there working hard, taking pride in their work, and striving for the best, even if the outcomes are uncertain.  Such is Agriculture!