Three Creeks Farm and Forest is a diversified operation in Boone County, MO. We grow and harvest a wide variety of vegetables, herbs, flowers and wild edibles on 15 acres in the Missouri River Hills. Our produce is sold directly to the local community, including grocery stores, chefs, and florists within a 20-mile radius. All of our food is grown without the use of synthetic pesticides or fertilizers, and we use many other practices to preserve natural resources and promote ecological health. These include cover crops, polyculture, minimal/shallow tillage, OMRI-approved and integrated pest management, perennial plantings, paper mulch, locally-sourced and certified organic compost applications, buffer strips, on-site composting, and agroforestry.

This project seeks to develop optimal conditions for the production of fresh salad greens in a challenging climate - the hot, humid summers of the Midwest U.S.

We grow and harvest more than fifty varieties of produce in a typical season, with gross revenues exceeding $60,000/acre. More than a third of our income is derived from the production of leafy greens, including lettuce, spinach and various brassicas such as mustard greens and arugula. These are high value crops with a local demand that is steadily increasing - from restaurants, grocery stores, and local consumers. Enhancing our farm's capacity to supply lettuce and other greens during the height of summer will improve the economic viability of our operation, increase our ability to meet the local demand, and contribute to a robust and healthy local food system. This project will serve as a model that can be replicated by farmers with similar challenging growing environments. We have tested the methods outlined in this proposal on a small scale, but this research will allow us to hone in on optimal growing conditions, collect valuable data to support our model, and conduct a cost-benefit analysis of our design.

Our research field included three adjacent plots, each 14' by 100'.

Plot 1 and Plot 2 were covered with caterpillar tunnel 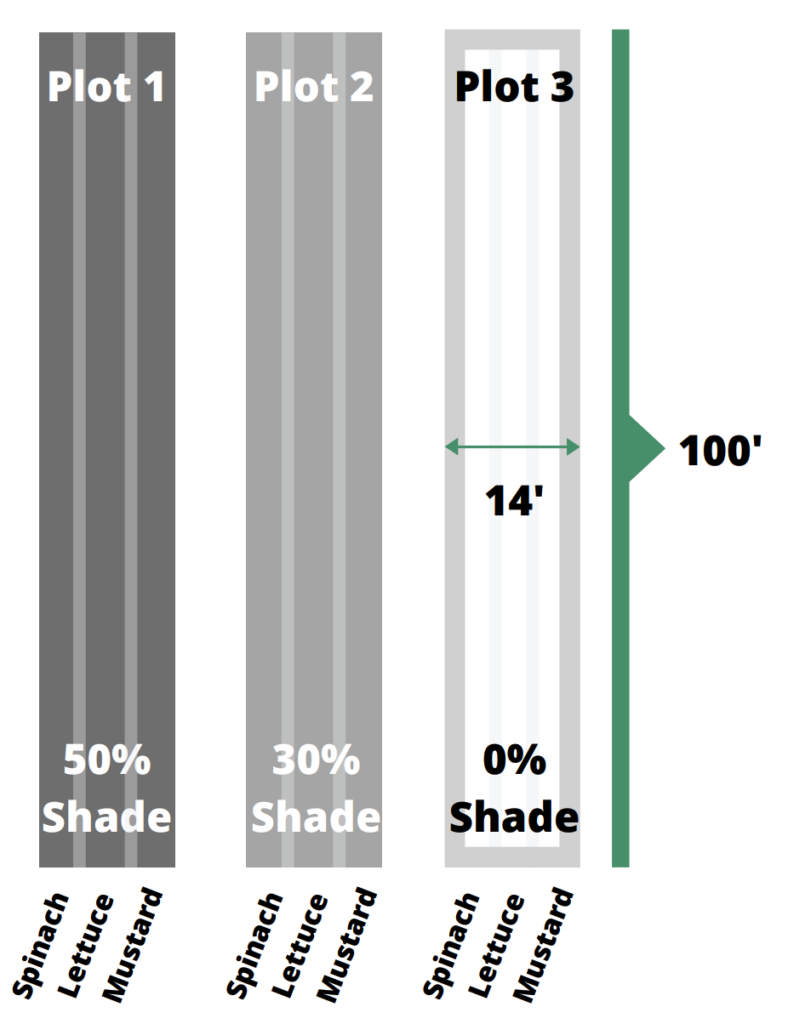 Plot 3 was a control plot - an open area without shade.

Each plot was outfitted with an identical irrigation system, consisting of a mainline and six overhead wobbler sprinklers (Senninger Xcel Gold Nozzle).

There were three beds per plot, one each of lettuce, spinach and mustard greens.

The lettuce and spinach were started in the greenhouse using paperpots- a system we adopted in 2018.

One of the challenges with starting lettuce in mid-summer is high temperatures, which can result in poor germination. To address this, we cover our greenhouse in 50% shade cloth, ensure adequate ventilation, and mist the seedling trays to cool them during hot summer days. 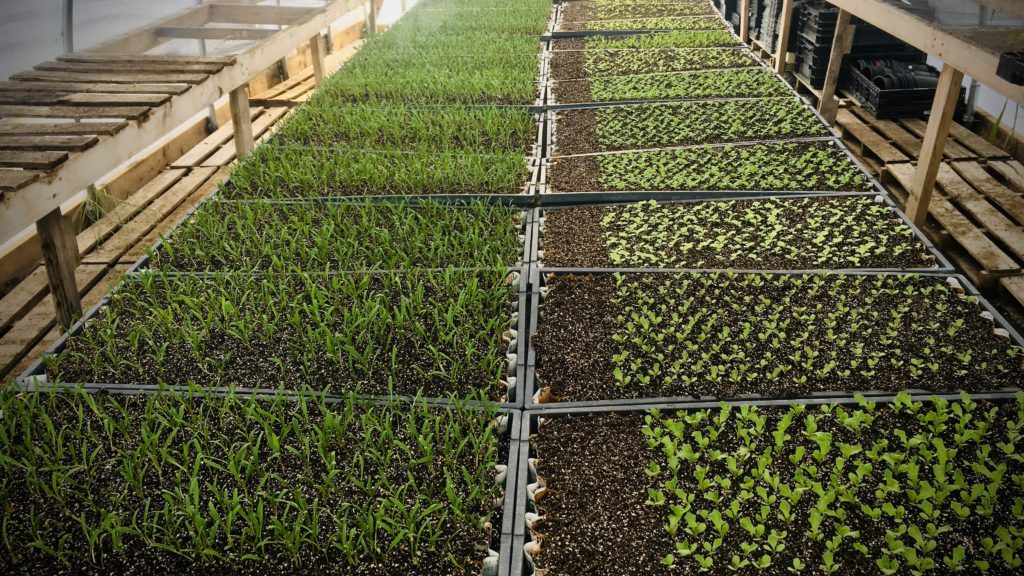 The lettuce and spinach seedlings were seeded on June 14th and transplanted into the research plots on July 15th. Lettuce varieties included a selection of Salanova types that we regularly grow throughout the season - green butterhead, red and green incised, and red sweet crisp. The spinach variety was Lizard, which is marketed as a slow-bolting, heat tolerant option for summer production.

Lettuce was spaced at 6" in-row, with 8" between rows.

Spinach was spaced at 2" in-row, with 4" between rows.

The mustard mix was direct seeded with a Jang mechanical seeder, using roller X-24 with the front sprocket at 9 and the rear at 14. Rows were approximately 4" apart. The mix included ruby streaks, golden frills, and scarlet frills.

All plots were planted and seeded on the same day.

Our project included weekly visual tracking of crops. The image below shows crop progression from late July to early September. 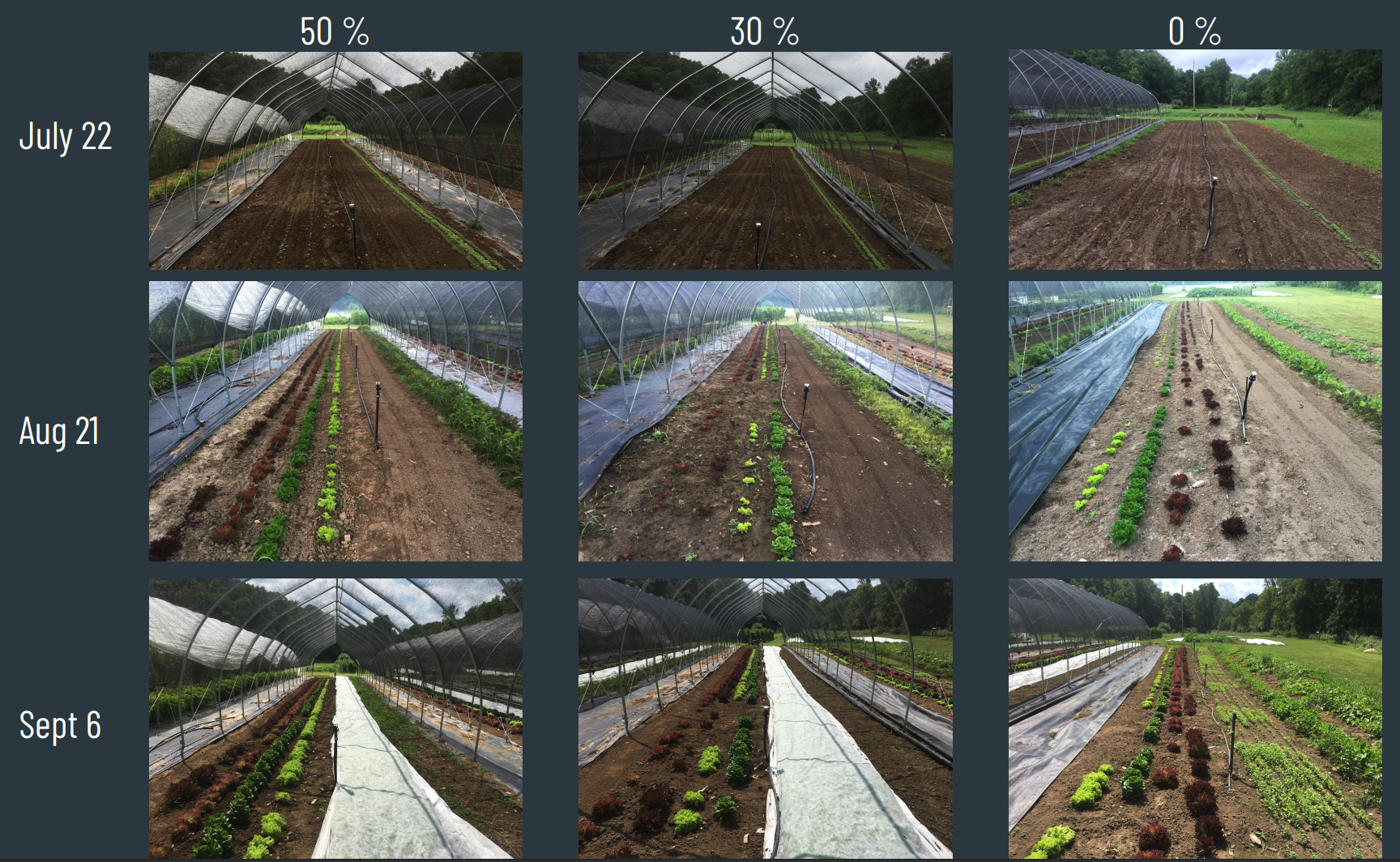 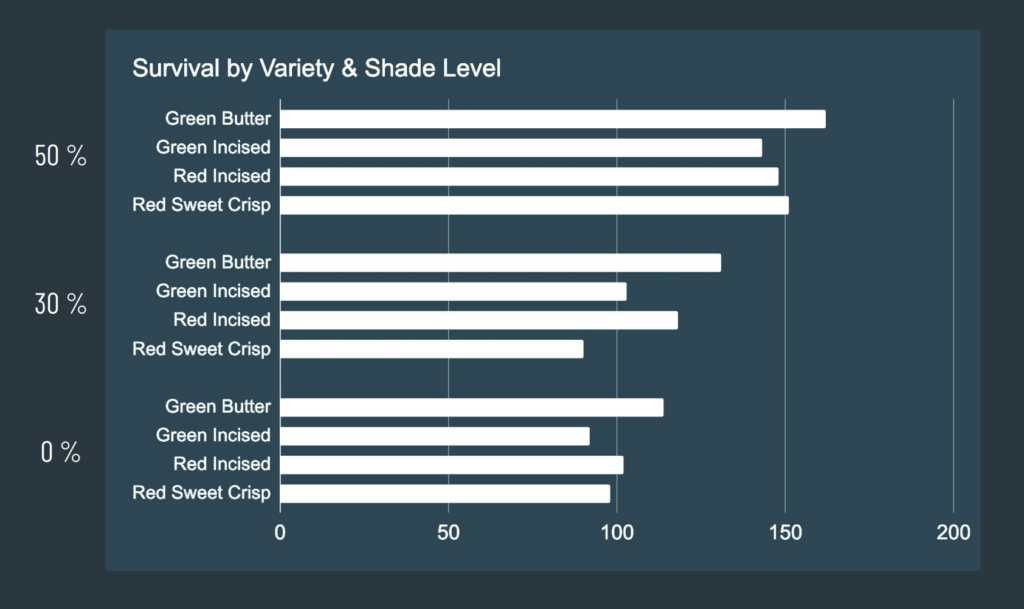 The following analysis will focus specifically on the lettuce plantings, after a couple of notes on the spinach and mustard greens. Due to pest and disease pressure, we lost the spinach crops in all three plots. Mustard greens showed no benefit from shade cover. In the control plot, we harvested 45 pounds. At 30%, the yield was 40 pounds. And at 50% shade, the harvest amounted to 33 pounds. From this data, we determined that mustards prefer full sun even in the hottest part of the summer growing season.

It became evident very early on that the shade cloth was having a positive effect on lettuce establishment and survival. This is visible in the crop progression photos.

We also tracked the differences in temperature and light levels between plots for the duration of the study, using waterproof data loggers. These were mounted on stakes in the center of each plot, with a shade cover to block direct sunlight from hitting the instruments.

This information was graphed for comparison. It should be noted that our data loggers were recording high temps 10 to 15 degrees above actual ambient temperatures, even after repeated attempts at calibration. Because the issue appeared consistent across all three loggers, we feel the data we gathered is still useful for making a comparison. The image below shows the temperature fluctuations over the course of the study. 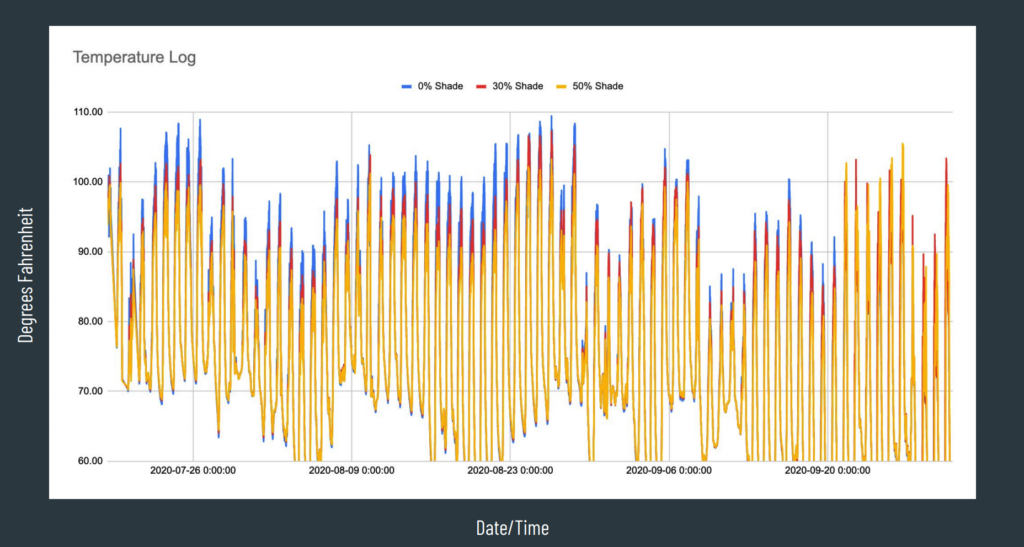 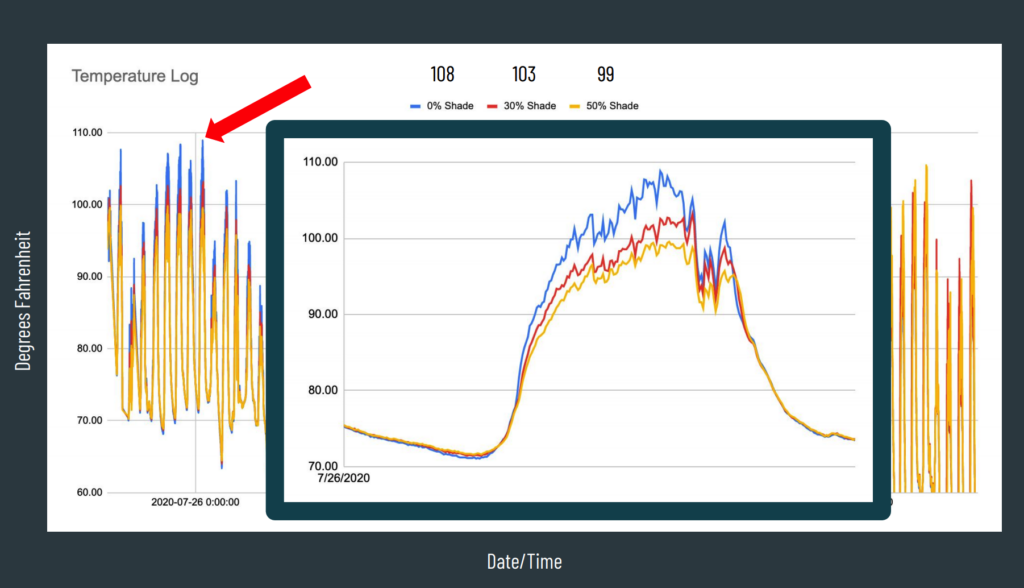 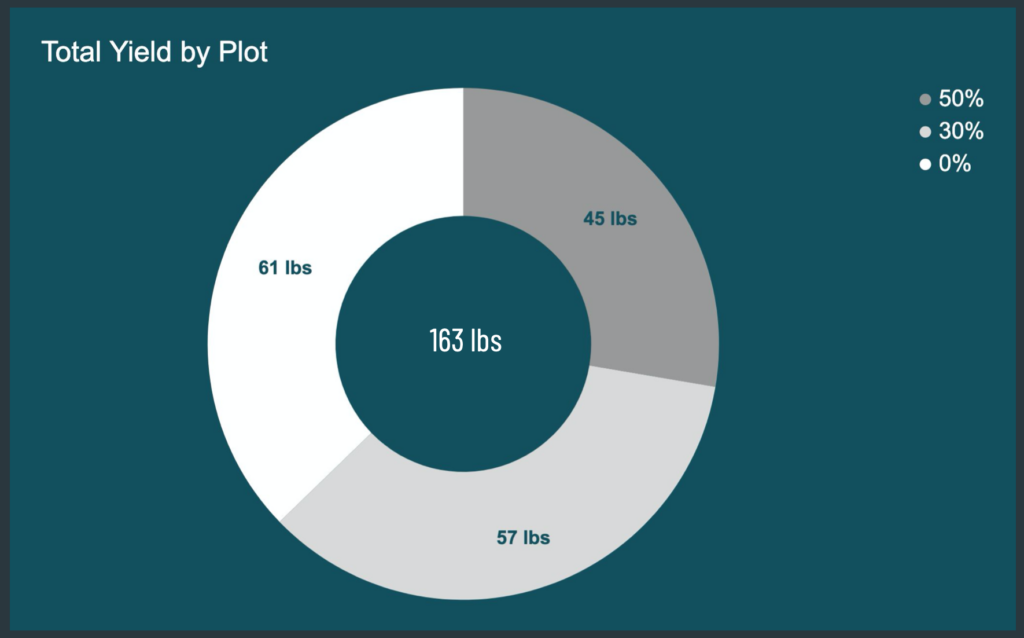 During the course of the harvest period, we cut lettuce from equally sized areas in each plot. The image above shows the total weight of lettuce harvested from each plot. At first glance, it appears that shade has a negative effect on yield for summer-grown lettuce. Looking into the numbers in more detail, the story is a little more complex. The chart below shows weekly yield by plot. Early on, in the first week of harvest, the 50% shade plot had the highest marketable yield. Qualitatively, it also looked the best. By the second week, the yields across all plots were roughly equal. In week three, a pattern emerges that shows rapid growth associated with more available light. The highest yields during that time period came from the 30% shade plot. 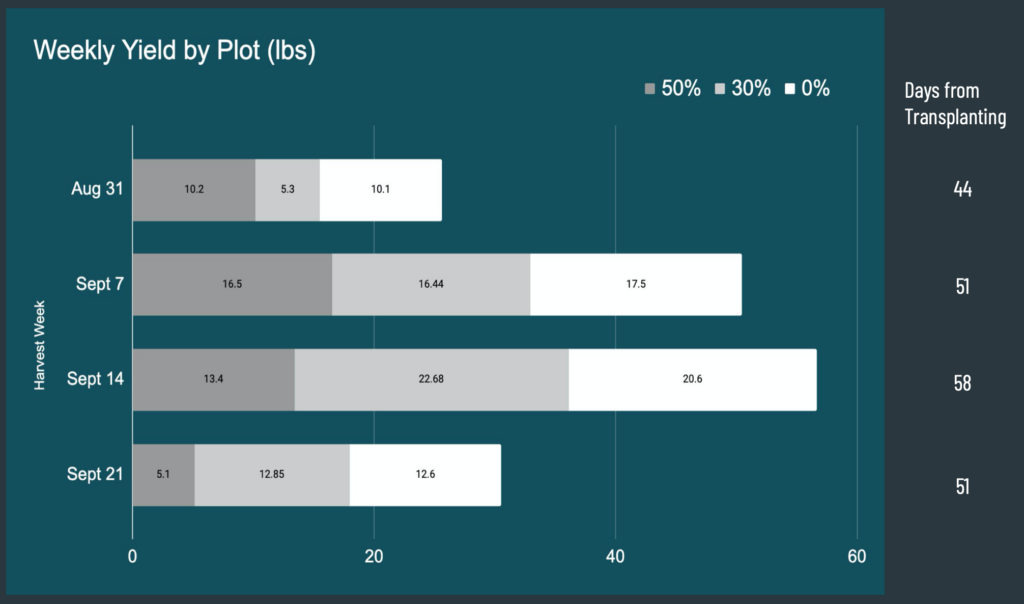 Combining this data with the plant survival results above and our experience in the field, we plan to adopt the following approach to summer lettuce production:

In theory, the steps outlined above will result in the highest survival rate and yield.

Alternatively, installing 30% shade cover for the duration of the growing period also appears to have positive effects on seedling survival and growth. 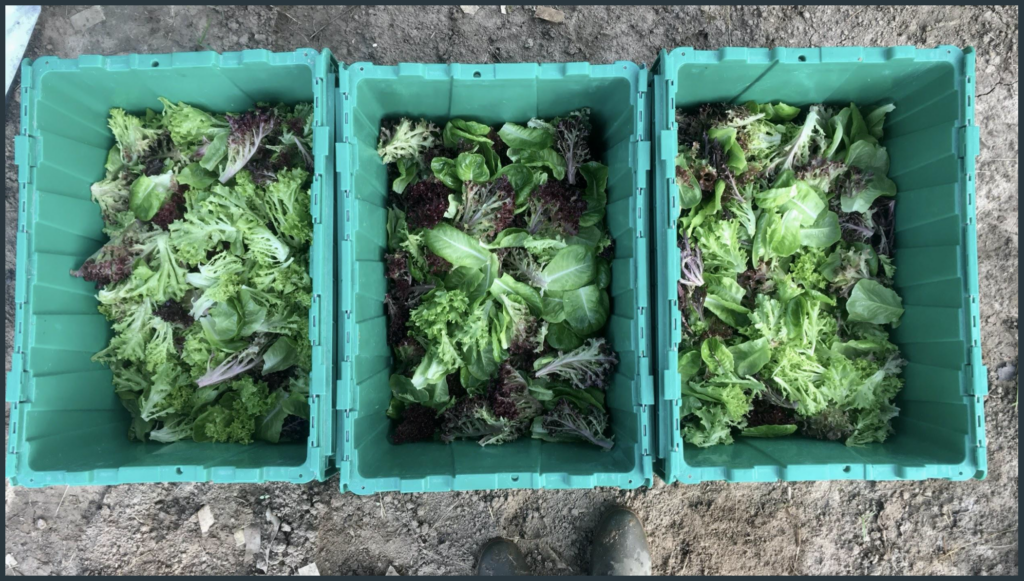 After conducting this research, we feel confident that we can contribute to the small farm knowledge base.

Applying shade cloth can be an effective way to modify the growing environment for lettuce plants in the heat of the Missouri summer.  In our experiment, the full sun lettuce planting had a higher mortality rate after transplant, because harsh summer sun and heat can be too much for delicate lettuce transplants. The 50% shade provided the safest environment for lettuce transplants. However, the full sun planting had the most total yield.  That curious discrepancy results from the fact that the full-sun heads that managed to get established developed denser heads.

Although we did not test this specific method, it would stand to reason that the best method for growing summer lettuce is a combination of two shade levels. First, ensure the young transplants are safely rooted by providing 50% shade and then remove the shade cloth sometime thereafter, when the plants are approaching maturity.

On our farm, we now use shade cloth to establish summer lettuces. In addition to the larger high tunnel frames, we use flexible 6-foot long fiberglass rods that can easily be bent into hoop shape. These hoops are adequate support for smaller sections of shade cloth and are easily moved from bed to bed. This method of support can be implemented as a cheaper, more moveable option. The large metal hoops are a better system for ergonomics, easy cultivation, increased air flow and efficient harvest, but the cost is higher. That said, we were able to harvest between $500 and $600 worth of produce from each tunnel in a fairly short time period (approximately 9 weeks). By multi-cropping over the course of the entire growing season and using the tunnels for season extension, it is likely that a farmer could pay off  investments in tunnel structures within a year or two.

2 Farmers changed or adopted a practice