Mshko'Ode Farm was established in 2018 as a family operation consisting of 33 acres of mostly forested hills. We have 6 acres of open field/pasture which is used for raising poultry, pigs, flowers, market vegetables, and indigenous varieties of corn, beans, and squash. Though not certified, we incorporate organic growing practices across the board. All meats are pasture raised and we do not permit the used of synthetic fertilizers or pest control chemicals. We grow, harvest, and care for the earth in a way that ensures sustainability, improves our relationship with the land, and attempts to achieve 7 generation-type ideals.

Pastured-poultry rearing systems are touted as 1) more environmentally friendly, 2) healthier for poultry, and 3) key to creating a more nutritionally desirable product.  However, little scientific work has been completed to determine the validity of these claims, particularly with regard to environmental impacts/benefits and pasture health.  Pastured poultry rearing systems are diversifying and almost no work has been completed to evaluate new and emerging systems.  We propose to evaluate the effect of mobile pen and day range rearing systems on a fallow, unmanaged pasture.  We will determine vegetative species composition, vegetative growth, nutrient profiles, organic matter content in soil before and at several points after pasture is subjected to each rearing system including a control plot.  We will further determine the effect of each rearing system and on carcass quality including growth rate and part development.  Results will be analyzed to determine profitability and marketing potential of each rearing system.

The enclosed style rearing system consists of a 10ft x 15ft hoop style structure outfitted with a bell waterer and gravity and trough feeders and completely contains poultry (no ingress or egress) while providing access to pasture forage, fresh air, and sunlight.  The day range rearing system consists of a structure of identical dimension to the enclosed style pen but is open at the base to allow free ingress and egress.  Poultry in this system are contained by electrified netting surrounding the structure.

The field for the evaluation is divided into 6 rearing zones.  Rearing trials in Zone 1, 2, and 3 occur May 14 - June 6 and are subject to enclosed pen, day range, and control treatments respectively.  Rearing trials in Zone 4, 5, and 6 occurred June 8-August 7 and were subject to the same treatments.  For each pen treatment, rearing systems were moved to fresh pasture daily with identical initial stocking rates.  We used cornish cross broilers sourced from the same local commercial hatchery and raised on pasture from week 3 or 4 to week 8 of life with continuous access to feed and water.

Yield of each rearing system was determined by recording mortalities and their source.  Weight of carcasses and major parts will also be recorded upon slaughter.

Pasture impacts will be determined by collecting and analyzing soil samples (following standard NRCS protocols) and vegetation samples from each treatment zone 1 year following rearing.  Vegetation will be cut from a standard area at the soil surface, identified, dried, and weighed.  Soil samples will be removed from similar locations 1 year following the rearing trials and submitted to an appropriate soil health lab for analysis. 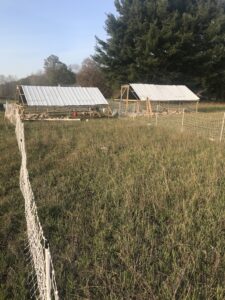 In Summary, chicks in both tractor styles experienced mortality.  Survival was much higher in the enclosed chicken tractors relative to the day range style; a storm and predators were the primary cause of chick mortality, The day range style tractor was ineffective at protecting from aerial predation (particularly owl) and less protective of chicks during poor weather conditions. 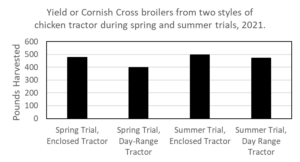 Impacts to the pasture/field (visual) 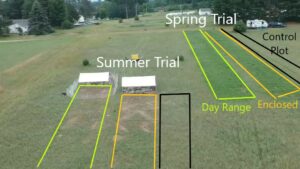 Pastured Poultry trials had immediate visual impact on fallow field.  Areas subject to both enclosed and day range rearing styles during May 2021 were revegetated within two months (picture below is from Late June).  In each treatment plot, vegetation was darker green and biomass was visibly greater than control plots.  Pasture Impact during both spring and summer trials by the chickens was also visibly different between rearing styles.  Pasture impact in the day range style appeared less intense and more variable within the plot relative to the enclosed style. Click the following link to view drone footage that captures the study area: IMG_5780

In May 2021, we posted pictures and background information on the Moshko'Ode Farm Facebook Page and shared it to several larger pastured poultry Facebook groups.  The post received 1,061 engagements, 7 shares, and 12 comments.  Follow-up posts are planned.

In conducting this work, we took on a perhaps optimistically ambitious project however we were able to meet many of the project objectives, evaluate the strengths and weaknesses of two pastured poultry rearing systems, generate highly valuable data for our operation and others.  Enclosed pen style poultry rearing systems have several advantages over day range models as they are far more robust for predator control and may better protect birds from predation.  It's possible, however, that crowding in these structures reduces growth rates and the need to move the structure every day can be physically taxing and highly problematic if farm laborers are unavailable to do the work.  Day range style enclosures require less daily moves and may require less maintenance overall but have substantial weaknesses for predator control and storm protection.  These issues might be lessened if other forms of predator control (guard dogs, geese) and weather protection are developed.  In the coming year our farm plans to experiment with predator control and attempt to further develop the day range approach into a more viable option.  We were able to generate refreshed statistics with regard to the proportional breakdown of pasture raised chicken into relevant cuts and parts.  This information has already helped our farm plan for future production years and should be directly applicable to other farmers raising cornish cross broilers on pasture.   The impact of raising broilers on pasture in terms of vegetation growth was visibly striking and we are very interested to see if these impacts persist into the following year.  We hope for similar results from soil sampling in early 2022.  We would strongly recommend that other farmers working with pasture raised poultry conduct similar comparisons in rearing styles and pasture impact, particularly in contexts that differ from environmental conditions of rural northern Michigan