Farmers face immense pressure from squash bugs (Anasa tristis). Because of this, a lot of time, energy and inputs are required to manage for them. While variety trials and breeding has been done for other squash pests and diseases (squash vine borer, powdery mildew, etc), extensive research has not been done concerning this pest. If not managed, many varieties only produce a couple fruit before the plant dies and succumbs to pest pressure. This is not only a problem in the Ozarks, squash bug pressure is increasing all over the North Central region.

Through variety trials and open pollinated cross breeding, I am breeding a Cucurbita moschata (C. moschata) grex that contains characteristics that are resilient to squash bugs. I started the project in 2020 by crossing many C. moschata varieties that already exhibit innate resistance to the pest. In not managing for squash bugs, I am selecting for plants that contain natural resistance. I am collaborating with other farmers in the Ozark bioregion to share seed in an effort to increase adaptability and grow in mutually beneficial partnerships with local farmers. In 2021, 5 farmers grew out seed from my 2020 crosses and many farmers in the Ozarks noted that the plants did well in relation to squash bug pressure. In the past, people have either given up on growing this crop or gone to great lengths to manage for it. Long term, this moschata grex can contribute many squash bug resistant varieties so that farmers can reduce inputs and energy when growing this crop.

In 2021, I found that of the 2020 crossed seed (varieties described in detail below), many F1 plants preformed well against squash bugs. Ozark Cheese, Seminole Pumpkin, Molena and Rancho Marques crosses held up the best against squash bugs while yielding good tasting and long storing squash. From the over 150 quality squash fruits from plants that showed good resistance to the squash bugs, I am saving seed from the best tasting fruits and will continue this breeding project in 2022, growing out the best selections from the grex, offering seed online and to my local community. Open pollinated cross breeding resulting in a hybrid swarm is a viable way to use selective regional pest pressures to breed hardy local varieties. Through reducing time and resources spent to manage for squash bugs, farmers have an easier time growing this crop using sustainable, organic practices which has proved challenging here in squash bug endemic regions.

Based on success of other organic farmers growing in difficult conditions who have developed regionally adapted varieties, I have decided to make a large genetic pool (known as a grex) of notable heirloom cultivars. After growing out and selecting for squash bug resistance from this genetic pool for 3 years, I will start to have a locally adapted moschata squash variety. I have spoken with Ozark farmers and market gardeners who are interested in trialing my grex and breeding from it, and indeed in 2021 many farmers trialed plantings with success.

All plantings were grown using organic methods though our land is not certified organic. The existing beds at Mountain Jewel were mulched with hay and top dressed with composted turkey manure the previous fall. The plot in a neighbor's field, Heartwood, was tarped in early spring to kill grass. The space has a history as an old cow pasture. In May, we cut holes in the tarps, double dug the soil, and created mounds. In July once the plants filled out the space, we cut the tarps off so they could send down roots into the soil as they sprawled. No amendments were added to either planting and both were deeply watered once per week.

For these growing trials, I used the F1 seeds from the squash growing trials I did in 2020, as well as seed from some new promising varieties. In 2020 I grew squash that were reputed to be the most resistant to squash bug pressure. These varieties included Seminole Pumpkin, Thai Kang Kob, an Ozark adapted Long Island Cheese, a moschata landrace from Joseph Lofthouse in Utah containing over 500 squash varieties, South Anna, Rancho Marques (a landrace from Sonora, Mexico), a F7 Waltham butternut/Seminole Pumpkin cross bred by members of Dancing Rabbit Ecovillage in Northeast Missouri and a Lofthouse moschata crossed with Thai Raw Kaw Tok. I let these squash open cross pollinate and saved the seeds from the most vigorous plants.

The planting at a neighbor's field, Heartwood, in Ozark County, Missouri consisted of 50 plants 7 ft apart at 5 foot spacing. The mounds were planted May 14, 2021. Each mound received 5+ seeds and was culled to 1 plant that expressed the most vigor. The planting consisted of the following F1 seeds (grown out and open pollinated at Mountain Jewel in 2020) Thai Kang Kob cross, Lofthouse moschata cross, Rancho Marques cross, Ozark Cheese cross (a Cheese variety bred in the Ozarks for many years), Seminole Pumpkin and Thai Raw Kaw Tok. I introduced some new seed into the grex this year as well. These varieties include Mrs. Amerson x Crookneck, Tahitian Melon, Molena (an heirloom hailing from Molena, Georgia), and Magdalena Big Cheese. The planting was isolated from other C. moschata plantings.

The planting at Mountain Jewel consisted of two plots. One plot had 21 mounds. Due to problems with livestock predation, only 9 of the plants survived within this plot. The other planting consisted of 30 mounds. We trialed the following F1 crosses from 2020 (which were open pollinated at Mountain Jewel) in these plots: Thai Kang Kob, Thai Raw Kaw Tok, Ozark Cheese, Seminole Pumpkin, Lofthouse, and Rancho Marques. I introduced a local variety called Ozark Gold (a butternut), but didn't get any germination on the seed. I also tried 2 mounds of Guatamalen Green Fleshed Ayote, but both plants, after vigorous starts, died overnight of unknown causes. The mounds at Mountain Jewel were planted on May 27, 2021. We also sowed 5 seeds per mound and selected the most vigorous plant.

Neither planting was managed for squash bugs in any way. I didn't pick them off or use any sprays or coverings. By growing without managing for squash bugs, I am selecting for genetics that show resistance to squash bug pressure.

The aim of this project was to engage in the breeding of a widely diverse, open pollinated squash grex utilizing promising C. moschata varieties. I used many F1 seeds from 2020 plantings as well as introducing seed from new varieties in 2021. Here are some of the results I found:

Previously, conventional systems spend a lot of time, energy, resources and inputs managing for these pests. These practices demonstrate that through genetic selection, one can breed regionally adapted squash varieties that require low inputs and management practices in the face of squash bug pressure while obtaining yields. Within two years this breeding project has shown that one can grow squash organically and without pest management in areas with heavy squash bug pressure (something that has not proven very fruitful in the past), yet there is still selection work to be done improving yields per plant of the plants that show resistance. In 2022, I will continue this selection process with these aims in mind. 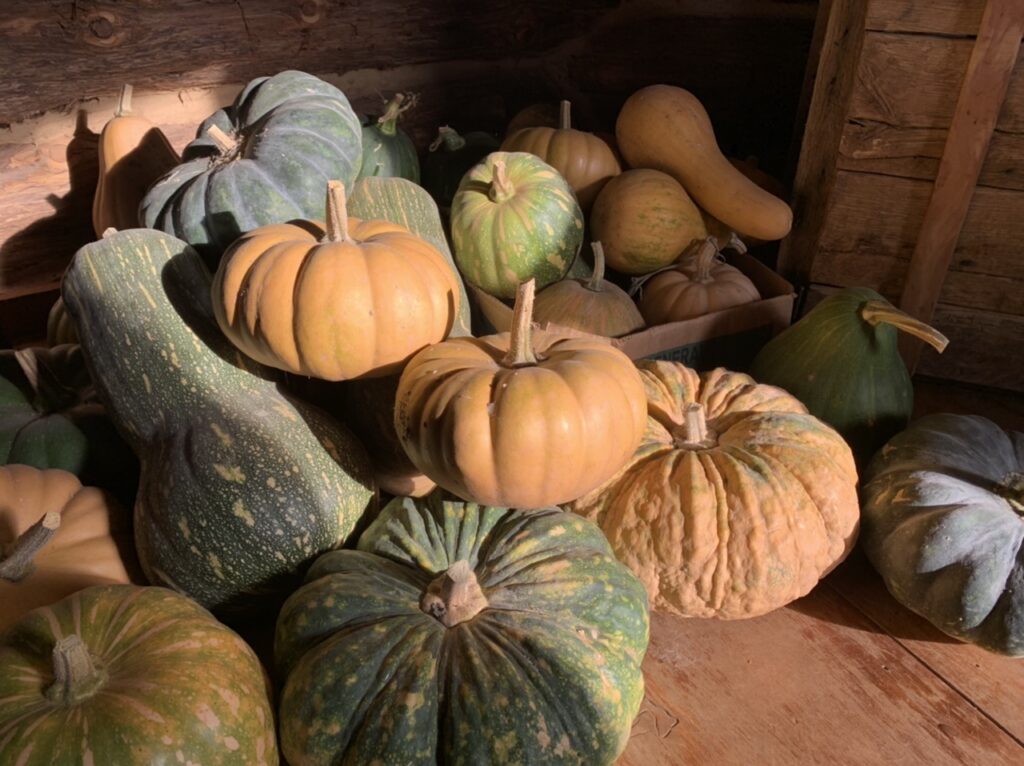 Throughout this project, I shared information and results via my website, www.ozarkmountainjewel.com and through social media reaching a wide community of organic farmers and gardeners. On my Instagram account @_mountainjewel_, I often shared videos and posts detailing the project. One can find posts related to this project on Instagram by searching the hashtag #ozarkmoschatagrex. I also created video updates of the project on my YouTube channel. 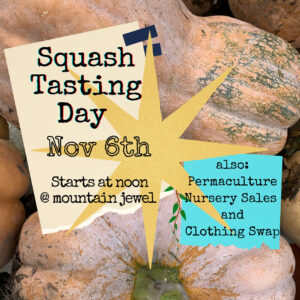 I hosted a squash tasting event at our homestead, Mountain Jewel, on November 6, 2021. Over 20 community members participated and took part in the squash tasting. They tasted samples of the diverse array of genetics within the moschata squash grex and rated the squash on a scale from 1-5 (1 equalling worst, 5 equalling best) and shared notes on the squash. I wrote an article summarizing the event and the community's feedback on the tasting trials which can be found on my website here.

On October 3rd, I presented at the 42nd annual Ozark Area Community Congress, the first and longest standing bioregional congress, and shared about the moschata breeding project with over 50 participants.

At a local event, Hootin an Hollerin, in my town on September 16-18, I set up a booth and shared information about my project and seeds, including networking with other local farmers.

In the 2021 growing trials, I found that of the 2020 crossed seed, some of the F1 plants faired better than others against squash bugs. I had many intriguing crosses from 2020 and because of this, it was difficult to identify which specific varieties contributed to each plant. This is a limitation when naming the squash variety type for trial purposes and in the future, I and other farmers growing seed from this breeding project will be able to pin point specific plants that thrive in the field, but no longer be able to specify exactly which parentage they come from. By year 3 (2022) then, this hybrid swarm truly earns the title of a grex and variety trials broken up into specific names becomes less important than selecting for chosen characteristics. However, for the purposes of this report, I will continue to use the names of female parent variety from 2020.

Ozark Cheese, Seminole Pumpkin, Molena and Rancho Marques crosses held up the best against squash bugs while yielding good tasting and long storing squash. These plants demonstrated that, through genetic selection, it is possible to grow squash without managing for squash bugs. From the over 150 quality squash fruits from plants that showed good resistance to the squash bugs, I am saving seed from the best tasting fruits (based on texture and flavor) and will continue this breeding project in 2022, growing out the best tasting and storing selections from this grex and offering seed online and to my local community. Open pollinated cross breeding resulting in a hybrid swarm is a viable way to use selective regional pest pressures to breed hardy local varieties. Through reducing time and resources spent to manage for squash bugs, farmers have an easier time growing this crop using sustainable, organic practices which has hitherto proved challenging here in squash bug endemic regions.

I would certainly recommend such a breeding project to other farmers addressing a regional pest. One feedback item from my endeavor is that while I have successfully selected for survival against squash bugs, there is work that needs to be done increasing fruit yield per plant. In 2022, once the breeding population is stable in selecting for plants that can thrive in the face of squash bug pressure, I will focus more intently on selecting for higher yield per plant.

Another aspect of breeding with such a large genetic pool is that there is a wide diversity of characteristics to select from. Squash flavor, texture, shape and size from the 2021 yields varied greatly. From the Community Squash Tasting Day that I held, it was obvious that people have different selection criteria and people's palettes are unique. This presents an opportunity for farmers to cater to a wide range of preferences through selecting from this grex what their communities desire. I hope in the future, farmers will select breeding populations from this grex.