No changes since originally proposed

The primary benefits of this project will focus on improved income and profitability and improved market opportunity for local production of primarily leafy greens in high tunnels. Our strategy to achieve this end is through better control of temperature and humidity throughout the year without using expensive and fossil fuel energy intensive heat sources. The objective is to use buried water pipe to store or extract ground heat beneath a high tunnel greenhouse and water-to-air heat exchangers at the surface to convey heat to the growing space. Periodic temperature fluctuations due to changing ambient conditions including night temperatures dropping as low as -30 degrees F in northern Iowa necessitate supplemental heat or adequate heat storage and heat recovery capacity. Especially in northern climates, supplemental heat can be prohibitively expensive during the heart of winter. Reversing water flow direction for ground heat extraction from the direction used for heat storage should create a beneficial temperature gradient. Enhancing the capacity to use ground storage to buffer daily and periodic temperature and humidity swings and attain higher winter night temperatures is especially important when potentially lethal cold temperatures can occur.

The objectives are to: 1) Adequately size, creatively design, and effectively operate a system to convey heat to and from the ground beneath a high tunnel to the growing space using water pipe for the ground loop and water-to-air heat exchangers in the growing space. 2) Measure the magnitude of the heat gradient created by reversing water flow direction during storage and extraction of heat in the ground loop and the effectiveness of that gradient to buffer temperature and humidity. 3) To convey the experience and lessons learned to the public and other growers in meetings, articles, and social media.

Prior to erecting a 30’ by 50’ high tunnel, foam insulation board will be buried 4’ deep under the high tunnel perimeter. Water line (1200’ of 3/4”) will be buried 3’ to 6’ deep, arranged in an inner loop and an outer loop near the perimeter. After erecting the high tunnel, cool season greens will be planted. The ground loop will be filled with water (23% propylene glycol) and connected to a pump and heat exchangers/fan at the surface. The pump and a fan will convey heat between the ground and the growing space. Heating and cooling will be controlled by separate thermostats. Excess heat will be stored in the ground, venting outdoors only if necessary or desirable. A temperature gradient will be established in the ground loop by thermostatically controlling flow direction using electric solenoid valves, one direction for heat storage and the other for extraction. In this way, the ground is warmest where the heated water first enters the soil. By reversing the flow direction during extraction, the water will be heated more by passing through the warmest soil just before entering the heat exchanger. System improvements will result from comparison trials using varying combinations of components, including: number of heat exchangers; heat exchangers in series vs parallel; fan size; isolating portions of the ground loop; water flow direction and flow rate comparisons. A third heat exchanger will be dedicated to using well-water in an open loop (emptying into a drainage tile) as needed for additional air dehumidifying beyond what can be accomplished by the closed ground loop system, especially when ground temperatures become too warm in the summer or cold in the winter. Heat storage/extraction and electricity use, temperatures, and humidity will be monitored. Trials throughout the project will be results driven from earlier trials and experience.

The project was begun in early summer of 2021 and proceeded according to the proposal with few exceptions. 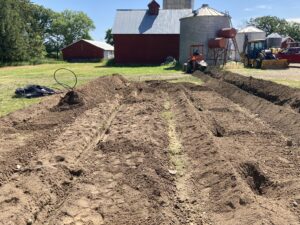 The high tunnel dimensions were 30’ by 54’, and the combined geothermal loop length was 1300’. The loops were oriented vertically in a narrow trench in a slinky pattern. The outer loop trench was about 140’ long with 700’ of water pipe. The inner loop was about 100’ long with 600’ of water pipe. Purging the system of air proved to be quite difficult because of the vertical orientation of the slinky loop. The flow rate in the outer loop was much lower than that in the inner loop for reasons that could never be determined. A loop diameter of about 42” resulted in over 100 loops in the entire system, each with the potential for trapped air at the top of the loop to limit flow rate. The circulating pump selected for the system was based on experience with a closed loop designed for drying corn (FNC17-1080) that consisted of three ¾” pipes oriented horizontally and manifolded to 1¼” at the heat exchanger and pump. Because the flow rate in the high tunnel system was substantially lower than the drying loop when the same pump was used a larger pump was purchased to increase the flow rate enough to adequately test the system. In hindsight, if the geothermal pipe slinky system had been oriented horizontally as in the drying loop, and three loops used instead of two, the larger pump and greater electricity use would not have been necessary. The larger pump in the high tunnel operating on the highest setting (about 200 watts) gives comparable flow (4.2 gallons per minute) as the smaller pump in the corn drying loop is capable of with only 77 watts. Restrictions in the above ground plumbing fittings in the system have also been identified and will be changed to increase flow rate.

Up until mid-December air temperatures were unseasonably mild. Soil temperature was maintained at a sufficiently high level to provide adequate heat at night, and produce was being harvested as needed. The system was operated manually without thermostats and without reversing flow direction in order to get some baseline experience with the system performance. On December 15th the Upper Midwest experienced a Derecho (wind storm) that affected our farm severely. Included in the damage we experienced was a large section of metal-clad barn wall that flew into the high tunnel, slashing plastic and bending some framework.

Through the remainder of the night high wind continued to expand the size of the torn area. The following day when the wind subsided, a group of helpful neighbors came to assist in putting a tarp over the damage before the approaching cold weather threatened the growing crop within. Although the tarp was quite effective, it was opaque and blocked sunlight from a third of the greenhouse space.

Even though it was secured tightly with ropes wind was able to penetrate all too easily. This was quite a setback for the planned evaluations. The impact of colder weather on soil temperatures was more pronounced because of the damage. On January 13th a brief stretch of sufficiently mild temperatures and low wind speed presented an opportunity to repair the damage just in time for about 8” of snow the following day.

Temperature monitoring has continued through the entire period while relative equilibrium is reestablished, but soil temperatures have dropped significantly as of the time of this report. It is difficult to estimate how much of this has resulted from the damage to the greenhouse and the length of time that substantial reduction in solar gain and cold air penetration because of the tarp. Graphed data is shown for the period following the repair (January 13th) to illustrate the ability of the greenhouse and heating system to buffer temperature fluctuations as compared to ambient air outside. 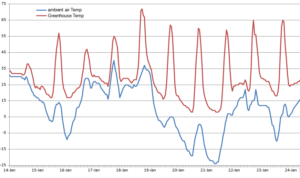 Even when outside temperatures have been as low as -24 F, inside temperatures have remained above 8 F. Although this temperature is lethal to the plants within, temperature spreads from outside to inside of up to 30 degrees F and more are encouraging. The experience we are getting should help us to concentrate on improvements that can help us meet our goal of crop production through the winter with very little energy use for heating besides what is required to access and distribute the solar energy stored in the ground and incident on the greenhouse roof each day.

In the spirit of research, Steve planted varieties in the hoophouse in the Fall of 2021 which otherwise wouldn't have been considered given the crops low tolerance for deep cold: Broccoli, cabbage, kohlrabi, and 5 different varieties of head lettuce. Results through January 2022 have not been favorable to those varieties. Though, there is some potential with the lettuces if internal temperatures can be held slightly higher than we were able to in the nights that dipped into the -10 to -20 F outside temperature range. The spinach that was planted from seed had poor germination due to high fall temperatures but has performed wonderfully overall with very little leaf quality deterioration. Crop plans have already been discussed for the 22-23 winter rotation based on our findings so far.

Steve has been a guest on five podcasts since Nov 2021 talking about his farm, but making sure to mention the project and it's importance to the future of the operation. One show in particular, The Shark Farmer podcast, which aired on SiriusXM ch 147 in November 2021 took particular interest in the project and spent a few minutes asking questions about it.

Looking ahead a few months, Steve has also secured speaking opportunities at two separate events, one in the early spring and one in the late spring of 2022, to talk specifically about the project and our findings through the 1st winter of the study.