The project takes place on a twenty acre diversified agroforestry farm. We practice silvopasture with a herd of 4 miniature cattle in between rows of nut trees and in wooded areas to control invasive species. We also have a small mixed poultry flock and bees. Additionally, we began a tree nursery of mainly native and edible trees and shrubs to stock our farm and to sell. The farm began in its current form in November of 2020. Planning took place over the following winter and operations began in spring of 2021.

We aim to produce a local, nutritious, affordable poultry feed while also improving the health of Big Green Lake by utilizing excessive plant growth removed by aquaweed harvesters each year, some invasive, as well as invasive zebra mussels, analyzing the nutrient content, and formulating it into a poultry feed. In line with duckweed and other aquatic plants, this current waste product is expected to be high in protein, vitamins and minerals, with added calcium from the mussel shells.

If successful, this could develop into a community enterprise which would provide an alternative source of income for us as farmers, plus other jobs for the community.  Additionally, area poultry farmers will have a local, sustainable, and affordable option for sourcing feed.

I chose to test the efficacy of aqweed feed with layer chickens because, although duckweed and other aquatic plants are known to be quality feed for livestock other than chickens, the aqweed coming from Green Lake contains zebra mussels. Zebra mussel meal is high in calcium which is essential for eggshell formation, therefore layer chickens trials seemed the logical choice.

We chose fifty birds for the control and experimental flock to have a reasonably high number for better experimental data yet not too high as to exceed project budget limitations. We chose the three month trial period because the trial must start after June, when the first aqweed is harvested from Green Lake, still give us enough time to do the feed analysis and preparation, give a reasonable time period for data collection, yet stop the trial before decreasing daylight hours significantly reduce egg production. Because of that and budget limitations, we decided to not continue trials beyond beginning of October.

Counting daily eggs and weighing of each flock will compare egg production and show whether the experimental flock is meeting or exceeding the control flock nutritionally. They will have the same feeders, waterers, identical stalls in the same barn with the same access to outdoor runs.

We unfortunately achieved no measurable results, as we were not able to carry out the proposed project. To see results that we did achieve, please see the learning outcomes section.

We were also in conversation with the science communication publication Scientia Journal which was interested in featuring the project in the annual agriculture, horticulture, soil science, food, and natural resources edition. These talks ended, however, when they learned our project was stalled due to the challenges we faced obtaining the birds and creating the feed.

We hope a partnership with the UW-Madison Meat Science & Animal Biologics Discovery Program will allow us to move forward. Part of the partnership will be to discuss what kind of communications we can produce to share our results. 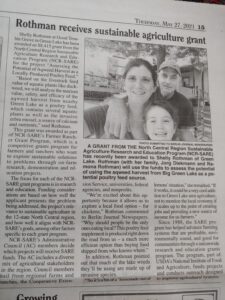 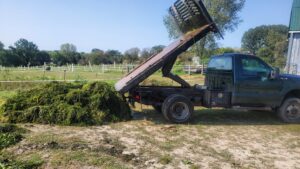 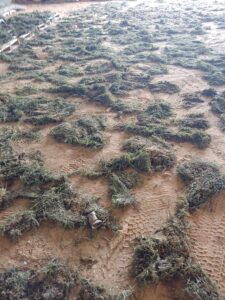 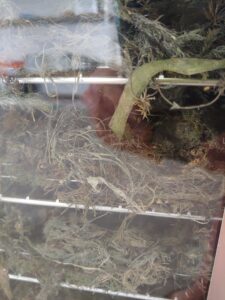 We have learned a massive amount from this grant, although not exactly what we had started out to learn.

First of all, most folks we contacted for assistance with the project were enthusiastic and ready to help wherever they could. There is a lot of support and interest in the community to see what can be done with the huge amount of lakeweed we pull out of our lake each year.

We had few issues obtaining the lakeweed from the local sanitary district which harvests it from the lake. We did not receive any zebra mussels as we had planned and were assured we'd be able to get. The sanitary district staff said they were unable to find a significant amount this year in time for the nutrient analysis.

To store the lakeweed, we tried four methods to dry it: laying it on the ground in an open air shed and circulating air with a large barn fan, laying it out in the same space with no fan, laying it outdoors in the sun, and in the dehydrator.  For extra soggy batches [mainly those with a lot of dense weed such as duckweed or filamentous algae], the dehydrator was necessary to dry the weeds. Otherwise, simply laying it out to dry with protection from the elements worked well, although we did have a particularly dry year and years with a lot of rain may make this more difficult. The barn fan did not accomplish much and the weed laid out outside did not dry well, and in one case, was not brought in on time to be saved from the rain. We then stored the dried weed in old feed sacks.

We had some trouble ordering the supplies we outlined on our proposed budget. By the time the grant was approved the dehydrator and the food grinder we had budgeted for were both discontinued. We also learned that the hatchery where we hoped to buy the layer hens from would not have the animals available in spring of 2021 when we had hoped to begin the project. They would have layers available in fall, but we had concerns that the shortening days of that season would affect the egg production.  We opted then to reserve birds for spring of 2022, though this postponed the research quite a bit.

In hindsight this was not a bad thing as we faced many more hurdles in producing the feed. The forage analysis we budgeted for told us the nutritional content of the feed, but the lab was unable to test for any pollutants that may be harmful to the layer hens. They recommended the Iowa State University toxicology lab.  After speaking with the lab, they would not accept a sample directly from our farm. They only work with veterinarians or universities. I contacted all of our local vets but none work with poultry and needed to see the animal before filling out any paperwork. I reached further afield to several regional Wisconsin vets who did work with poultry but for one reason or another they did not want to or were unable to help. I reached out to the SARE grant coordinators to ask if there was a vet on staff who could help but there was not. However, after some discussion and a conference call, the University of Minnesota, our local SARE host, agreed to file the paperwork on our behalf and the toxicology report was eventually completed. Small amounts of a blue-green algae were found but it was determined to be not enough to discontinue the project.

In October, with the two reports completed, I contacted the local feed mill that had agreed to formulate a complete layer hen diet for us using the lakeweed we harvested. The owner of the mill ran this by his poultry expert and concluded that because there was no research to mix lakeweed with other commodities, there were liabilities for him and his mill. He was also concerned with the high protein content of the lakeweed.

Taking this back to the SARE grant team, they helped get me in touch with Heather Bartley, the Feed Program Specialist & Toxic Response Liaison at the Wisconsin Department of Agriculture, Trade and Consumer Protection. She agreed that lakeweed is not yet an approved feed ingredient so a commercial mill would have issues including it in a diet. To get it approved requires an involved application process with the state and likely federal government.  Alternatively, she recommended I contact a university which may have a feed mill of its own, specially for research such as this. She recommended a university in North Carolina but agreed logistics of getting lakeweed there and feed back here would be complicated.  Heather has since left her position at the Department of Agriculture.

I again returned to the SARE team, who were able to connect me with a team of researchers at the University of Wisconsin-Madison Meat Science & Animal Biologics Discovery Program. In time, we had a conference call with three researchers, two SARE staff, and myself. The researchers were very interested in the project and proposed possibly performing the research with their own flock of layer hens, in a controlled environment, and using their own feed mill. There were some questions about funding.

This conversation happened in November of 2021 and no plans were made before the semester ended. We reconnected in early January and the team remained interested, yet COVID and demands of the semester made setting up meetings difficult. In March, the team looked at our nutrient analysis of the lakeweed and determined that to appropriately incorporate it into the diet, an amino acid analysis would be required. They noted that it doesn’t have to be comprehensive, just some of the major limiting amino acids relevant to birds, such as methionine, cysteine, and perhaps lysine.

Soon after the UW-Madison feed mill manager said they would also not be able to mix the feed for our project, as UW is not licensed to distribute feed to any entity outside the University. His recommendation was to try to get FDA GRAS [Generally Recognized as Safe ingredient] approval for the lakeweed and proceed with trials in conjunction with the University.  Because the ingredient doesn’t have GRAS status, the feed mill can’t mix the feed even for an internal trial.

We did not budget for time or expenses for federal GRAS approval into this grant. The team at UW suggested that if we purchased a feed mixer and carried out the initial trials on our farm then they could perhaps work with us to go for GRAS certification and maybe submit grants to run future trials in a partnership at the UW lab. By this time, we had forfeited our chickens at the nursery as we were not sure if we would be able to run the experiment and the nursery could not hold them for us any longer.

This is all to say, we have overcome some barriers, yet some remain. Processing lakeweed into a feed for chickens is still very experimental and trying to do it as a single farm is challenging. In our experience, partnering with a university with a livestock research department is the best bet, although we have not yet had clear success there either. It would be best to establish that relationship, and bring the research team on board before getting started with the project. The team at the UW-Madison Meat Science & Animal Biologics Discovery Program was very interested and would be a good place to start. There was a lot of interest, but funding will be needed, and we would recommend starting the exploration process early because there were often delays in response times and in trying to set up meetings. Additionally, we have not yet found a way around the fact that lakeweed is not an approved ingredient. As far as we have learned, this means the farmer will need to formulate and mix the feed themselves [although a research facility may be able to help with formulation as long as they have the needed analyses] or the FDA approval will be needed to work with a research facility.