This project was designed to research the feasibility of extracting heat from a compost pile and heating a greenhouse for perennial production with that heat.  We found that we were able to successfully extract the heat from the compost pile and keep our greenhouse at an optimum temperature for growing conditions, while maintaining temperatures in the compost pile relative to our greenhouse temperature.   The investment was high at $14,000 but over years, especially when oil prices are high, this could pay for itself.  Results were shared with eight local growers at a Farmers Show and Tell Day at the farm on November 19, 2015, and published in a bulletin distributed to participants and available to anyone upon request. Find the project summary attached below the “Publications/Outreach” section.

For the past two years, we have been monitoring the temperatures of our compost pile during the winter months, and have found that it reaches between 140 to 155° F.  To maintain these temperatures, we must sustain the mass and shape of the compost pile.  Regrinding the pile provides aeration, adding oxygen, which keeps the heat building in the pile.

We at Petal Pushers Farm have been growing annuals and perennials at our 10 acre farm in Laconia, New Hampshire since 1995.  We sell the plants that we produce on our farm at our retail garden center, located on a busy route in the heart of the Lakes Region of New Hampshire.  Additionally, we sell trees and shrubs at the garden center that are purchased wholesale.  Our business gets good traffic visibility, and we advertise on local radio stations, have a website and a consistent following using social media.

As a seasonal business, we find it is difficult to keep employees on and expect them to return year after year.  In looking at our biggest expenses, the cost of fuel oil to heat our greenhouses is one of our largest and most cost prohibitive.  Another part of our operation is the production of compost from plant debris from our retail operation, as well as municipal yard waste from the city of Laconia.  The finished compost is used in our soil mixes, as well as sold to retail and wholesale customers.  We have a consistent supply of yard waste from the city.  A solution to the fuel expense is to find an alternate heating source, and the heat from the compost is a possible source.

Our technical advisor is Kelly McAdam of University of New Hampshire Cooperative Extension in Belknap County.  Kelly has been our liaison between Extension Specialists and the SARE organization.  She has helped us submit our invoices for reimbursement and carry out the required reporting.

John Porter of UNH Cooperative Extension has been instrumental in getting Stan Weeks, an agriculture engineer from New York and consultant hired by UNHCE, to the farm to advise us on this project.  Stan has provided his expertise in the feasibility of the project, especially related to temperature monitoring.  Stan advised us on the equipment needed to measure temperatures.

We also had some assistant from Extension’s Greenhouse Specialist for a short time before his departure from the university.  Brian Krug provided us with advice on how to log the data recorded from the temperature monitoring equipment.

To obtain temperature readings from the compost pile, we will install coil in the center of the pile. Monitors in the pile will register the temperature every 30 minutes each day of production.

In September of 2013, we hired a fabricator to begin building a copper coil and cage to place into in the compost pile.  The purpose of the cage is to protect the copper coil from being damaged by the weight of the compost pile and from equipment when the pile is moved in the future.  In April of 2014, the fabricator built box tubing and welded the center frame of the apparatus.   In July of 2015, the core unit was completed and then installed in August of 2015.  Installation of the heating apparatus involved building up our compost pile over the unit.

Our compost pile is made up of leaves, grass clippings, plant debris, and brush.  We grind the material and use an elevator to make a pile.  As the pile composts, the volume of the pile decreases.  We then go back and grind, which adds aeration to the pile, and again use the elevator to make a new pile.  Material for the pile we are using has been stockpiled since May of 2015.  After placing the coil-cage apparatus at the base of the pile, we then began to build our pile around the cage frame.  As we built the pile, we placed temperature sensing probes in the pile-one in the bottom, the middle, and one in the top of the pile.  These probes will allow us to get temperature readings from these areas of the compost pile.  The pile, with heating apparatus and temperature sensing probles, was complete as of October 1, 2015.
As the pile began to compost, the volume of the pile decreased.  We continued to add ground material to maintain the 30-foot pile.

The heating system inside the greenhouse is a radiant heat bench system, allowing for root-zone heating of our perennial plants.  This is the most efficient way to provide heat to our plants.  Our original plan was to use heating tubes in the floor of our greenhouse, however, we decided to build benches instead.  The benches allow for better heat efficiency.   This re-designed heating system involves water lines that are laid on top of the benches.  The water lines are filled with biodegradable anti-freeze, resulting in a closed system.  As a result, this will eliminate the possibility for gas vapors from the compost pile to escape into the atmosphere. We also decided to place row cover on top of the benches (over our plants), so as to help keep the heat at the plants.

Originally, it was our intention to place water tanks in the greenhouse to capture solar heat during the daytime, which would then be pumped back into the compost pile when the temperature reached below the minimum threshold in the pile.  However, since our plan changed to a root-zone heating system, we found that it was not necessary to use the water tanks to collect solar heat.

The bench system was built in September of 2015.  To heat our perennial plants in the greenhouse, we build a radiant heat bench system to provide root-zone heat to the plants.  We built greenhouse benches with saw horse brackets and 2 x 4’s.  We set Styrofoam sheets down for bench tops, with dimensions 4’x8’x2”.  Next, we cut 2’x8’x2” boards into one foot side boards and used silicone to hold in place.  We set ½” poly pipe on the bench tops and connected manifolds to the pump line.  This is a radiant heat set up.   We added a thin layer of soil over the ½” lines and set one gallon perennial pots on the soil.  To the benches, we added hoops and row covers over the tables to hold in the heat at night.  Our goal is to keep the night temperature at 45° F.

We manually take readings twice a day with a benchtop recording device.  Readings are taken once in the morning and once in the afternoon, and recorded in a log book.  It was our intention to obtain a device that would log this data for us, however, we have been unable to identify the proper piece of equipment.  We plan on obtaining this equipment for next year’s production cycle.

We manually recorded the temperatures from the ten zones twice per day-once in the morning and once in the afternoon (see spreadsheet attachment).  Temperatures in the pile (zones 1-3) remain fairly consistent for ten days and then begin to drop off.  The reason behind this is that the volume of compost began to reduce and we had equipment down for two weeks.  During this time, no additional material was added to the compost pile to maintain the 30-foot pile.  We conclude that the volume of the pile must remain at 30 feet to keep consistent temperature readings inside the pile.

If a farmer is to heat a greenhouse that needs warmer temperatures (60 F and greater, for example), the consistency of material in the compost pile, as well as the height, will be critical during the heating phase. 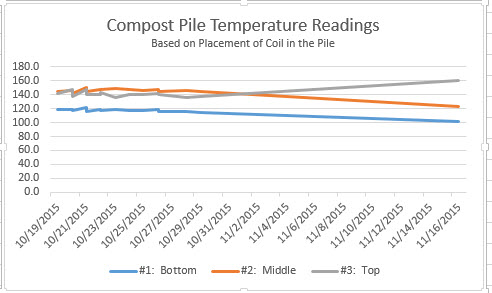 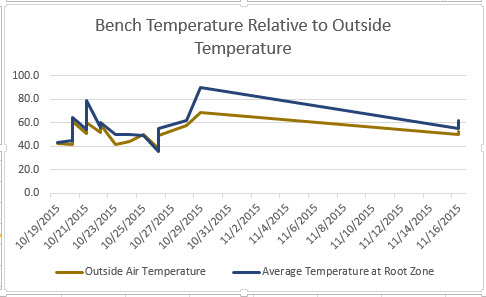 Our outreach and education efforts involved holding a Farmer Show and Tell here at the farm on November 19, 2015.  This event was attended by eight people.  We also prepared a report about the project, with the assistance of our technical advisor.  This document was distributed to the attendees at our show and tell event, and are made available to anyone who would like more information but who was unable to attend our outreach event.  This document is also now available on the UNH Cooperative Extension website.

We feel that we learned many things from this project.  First, we have a better understanding for the timeline, volume, and materials needed to build our compost pile adequately to maintain the temperatures needed for perennial production in the greenhouse.  Without our equipment in disrepair, we may not have noticed this downward trend with the temperature readings.

We have a readout device that is manual, and therefore we have to go in at times to see the ten readings and record.  We would like to obtain a device that will record the data for us electronically and export to a computer to get hourly readouts so that we do not have to manually observe and record the temperatures.

We will continue record and give readouts to our project technical advisor, Kelly McAdam with UNH Cooperative Extension, on a monthly basis for publication.  We are committed to this project and as we refine in the future, we will keep Kelly updated.

Now and in the future, we will continue to demonstrate the composting process, the equipment that is necessary to produce a large enough pile for this heating system, as well as the materials needed for the heating system itself.  The cost of the system is available, as well as price comparison to heating fuel so that growers can identify the savings before undertaking such an investment.  We could further test the system in the future with trying other crops that require slightly higher growing temperatures, such as vegetables.

Our underlying goal for this project for us was to see if we can find an alternate heating source so that we may no longer have to purchase heating oil to heat our greenhouses.  By doing so, we will save money and can use our savings to keep two of our employees on our payroll year-round.  It is too early to tell how soon we will be able to do this, particularly as we are in the investment stage of this project.  As heating oil prices fluctuate, this will also dictate our savings. It happens to be a year of low oil prices and so the differences in savings may not be significant for this year.  However, as heating oil prices and the prices of other forms of heating greenhouses fluctuate, this is a viable option for growers in the Northeast.  The initial investment may be high ($14,000), however, once installed and set up, the monetary return to the growers will be a savings not only in heating costs, but increased revenue in selling the compost once the heating season is over.