This project compared the performance of three different honey bee nucleus colony hive configurations by measuring strength, winter survival, and management over a one-year period. The study, carried out in western Massachusetts, sought to determine whether winter survival rates between three distinct hive configurations were measurably different, and whether one showed considerable advantages over the others that could be harnessed by northern US beekeepers to propagate overwintered honey bee colonies.

The results from the study clearly point towards nucs in Group B as the best-performing hive configuration within the experimental parameters. Colonies in this configuration outperformed the other two hive configurations in all measured categories: they had the highest percentage of colonies successfully advancing into winter (60%), the highest percentage of colonies successfully overwintering (50%), and took the least amount of time to manage throughout the season (55 minutes).

Despite the superior performance of Group B hives over the other groups, overwintering survival of 50% is below commercially acceptable levels and further research/experimentation is recommended. Results were shared with beekeeping organizations and attendees to the 2017 Massachusetts Beekeepers Association Field Day held in Amherst, MA.

At a time when honey bee colony losses are on the increase, nucleus colonies can offer beekeepers in northern climates a viable and efficient means to retain or increase their stock. Nucleus colonies are small, viable colonies of honey bees created during the late spring and early summer from full-sized hives. They are an appealing addition to the commercial, sideline, and backyard apiary for two reasons. First, they function as a reserve stock of locally raised bees that can be used to replenish any winter losses. Second, they are a highly saleable product that offers an attractive business opportunity to apiaries in the region.

Successfully managing and overwintering honey bee nucleus colonies requires coordinating hive setup with local environmental conditions. This project compared the performance of three different nucleus colony hive configurations by measuring strength, winter survival, as well as the time and steps required to maintain them over a one-year period. The study’s main objective was to determine whether winter survival rates between groups were measurably different, and whether one hive configuration showed considerable advantages over the others.

This project's primary objectives were to measure the performance and overwintering success of three different configurations of honey bee nucleus colonies in Massachusetts, in an effort to determine an optimal setup for increasing apiary stock. The three configurations are:

Group B :20 single 8-frame colonies in deep hives with an in-hive feeder.

During each inspection, the following data points were measured and recorded in an Inspection Sheet: presence of queen, swarming impulse, number of frames of brood with adhering bees, number of frames of honey, hive weight, hive health/presence of disease, as well as the nature and amount of time spent on hive management tasks. Bees were monitored for signs of disease but were not administered any pesticides or medications of any kind. Towards the end of the production season, hives under 60 lb in gross weight were fed supplemental sugar syrup for overwintering purposes. Finally, in the late fall the colonies were grouped on pallets in blocks of four, sheathed with tar-paper and outfitted with a 2” rigid foam insulation above the inner cover as a wintering aid.

The winter of 2015-2016 provided further data with regards to hive configuration as it related to the ability of each nucleus hive in the experimental groups to survive winters. This information was gathered over the late winter and early spring of 2016.

We recorded the following results over from July 2015 – April 2016, when the hives could be considered successfully or unsuccessfully overwintered:

1. Group A (1 colony of 10-frames in one brood chamber): of the 20 hives set up, 5 swarmed, 5 were combined because they grew too swiftly and 10 progressed into the winter as originally established. See Fig. 1.
> 50% of Group A colonies advanced into winter as nuclei.
> 50% of colonies were disqualified from group due to dwindling, swarming or growing too swiftly (combined colonies).
> Group A colonies required an average of 70 minutes of management each. 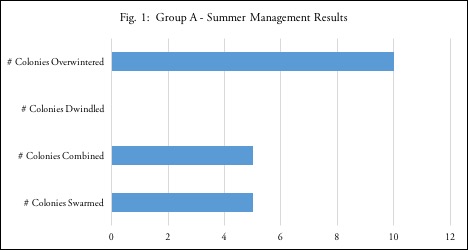 2. Group B (1 colony of 8-frames w/in-hive feeder in one brood chamber): of the 20 hives set up, 1 swarmed, 5 were combined because they grew too swiftly, 2 died and 12 progressed into the winter as originally established. See Fig. 2.
> 60% of Group A colonies advanced into winter as nuclei.
> 40% of colonies were disqualified from group due to dwindling, swarming, or growing too swiftly (combined colonies).
> Group B colonies required an average of 55 minutes of management each. 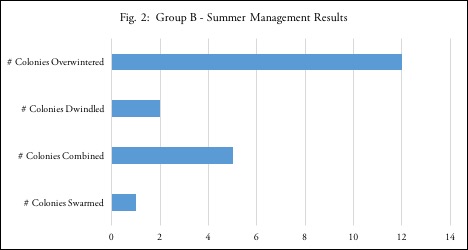 3. Group C (two 4-frame colonies with two-way in-hive feeder in one brood chamber): of the 10 hives (20 colonies) set up, 5 swarmed, 9 were combined because they grew too swiftly and 6 progressed into the winter as originally established. See Fig. 3.
> 30% of Group C colonies advanced into winter as nuclei.
> 70% of colonies were disqualified from group due to dwindling, swarming, or growing too swiftly.
> Group C colonies required an average of 65 minutes of management each. 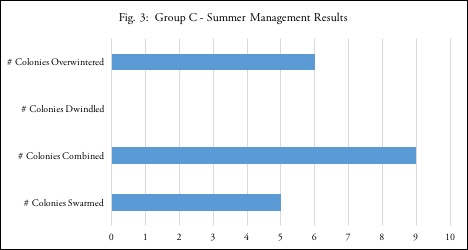 The final trial for the colonies headed into winter was their ability to survive the long—and, these days, highly variable—New England winter. We recorded the following results in winter/spring 2016 (See Figs. 4, 5 & 6):

The results from the study clearly point towards Group B (1 colony of 8-frames w/in-hive feeder in one brood chamber) as the best-performing hive configuration within the experimental parameters. Group B outperformed the other two hive configurations in all measured categories: it had the highest percentage of colonies heading into winter, the highest percentage of colonies successfully overwintering, and took the least amount of time to manage throughout the season.

Groups A and C had more swarms and combinations during the summer management (colony-growth) period, indicating that their ratio of population to hive size was too small. Successfully managing these groups would take added beekeeper time and beekeeping equipment, making their hive configurations less financially viable. Conversely, Group B seemed to offer a more balanced hive setup, indicating that it struck a better balance of population to hive size. This resulted in greater summer-time colony stability with a smaller investment of time in colony management.

The results from the study were presented to the Massachusetts Franklin County Beekepers and to the Massachusetts beekeeping community at large during the MA Beekeepers Association Field Day on June 17, 2017. The event gathers instructors, academics, amateurs and professional beekeepers every year and offers a number of hands-on workshops and clinics focused on practical beekeeping.

Because the results of this experiment do not provide a scheme for colony increase that is—at least at this stage—reliable and successful enough to promote as a replicate-able and profitable template for colony increase and spring sales, we did not produce an illustrated instructional pamphlet outlining the techniques described in this study

1 Farmers changed or adopted a practice
Assessment of Project Approach and Areas of Further Study:

While Group B offered clear advantages to the beekeeper and the best performance within the parameters of this experiment, the overall figure of 50% survival of overwintered nucleus colonies is far too low, and thus economically unfeasible, for beekeepers in Massachusetts relying on this technique to increase their stock or sell bees for profit each spring.

Because fluctuations in rainfall, available forage, and weather during summers and winters tend to have a large effect over the ability of honey bees to successfully over-winter in our region, a future iteration of the experiment focusing on the leading Group B hive configuration would be a logical next step to this study. The experiment would now use this nucleus hive configuration alone, increasing the sample size to 60 colonies in three groups of 20 in the same three bee yards for 1 or 2 years. We would suggest treating one bee yard as a control group with pesticide/medication for varroa mites and nosema, but not treating the other hives and observing if this has a noticeable effect on overwintering survival rates. A consistent survival rate of 75% or higher with a given hive configuration and management scheme would indicate a methodology that beekeepers can reliable employ to make colony increase and spring nucleus colony sales.