Bird damage to oil-seed sunflowers is a major issue facing all farmers, including organic sunflower farmers. Oil-seed sunflowers are primarily grown for fuel (biodiesel/SVO) and food , both for human and  the bird-seed industry. Besides groundhog destruction early on and weed pressure throughout the growing season with subsequent combine issues, bird damage is the final scourge that can make a profitable year vanish over a couple of days to weeks.

This study posed this question: If there is to be bird feeding on organic oil-seed sunflowers (not only because  it is expected but because effective organic deterrents are of limited  availability commercially) will providing a ”channeled” feeding of a barrier crop at the same time disrupt and create an unease in  the bird’s feeding pattern by making?  We introduced two tall, agriculturally valuable crops (corn and sudan grass) planted alternately in strips which broke the uniformity of the oil-seed sunflower fields to disrupt bird depredation and ultimately increase the organic oil-seed sunflower yields. Eight control and experimental groups were set up to test this theory.

Bird damage to oil-seed sunflowers is a major issue facing all farmers, including organic sunflower farmers. Oil-seed sunflowers are primarily grown for fuel (biodiesel/SVO) and food , both for human and the bird-seed industry. Besides groundhog destruction early on and weed pressure throughout the growing season with subsequent combine issues, bird damage is the final scourge that can make a profitable year vanish over a couple of days to weeks. Late planting due to a wet or cold Spring, fields adjacent to tree-lines where bird perching is predominant ,and equipment breakdowns resulting in later harvesting are all “real life scenarios" that can aid flocking birds in devastating an oil-seed sunflower crop up to 50-90% of potential harvest.

Many universities and extension services have spent countless hours and investment dollars on attempting to develop new, more effective techniques for the suppression of bird depredation with at most mixed results. This is a very real problem and it is extremely difficult to find a cheap, easy, efficient method to reach substantial remediation.

This study posed these questions: If there is to be bird feeding on organic oil-seed sunflowers (not only because it is expected but because effective organic deterrents are of limited availability commercially) will providing a ”channeled” feeding disrupt and create an unease in the bird’s feeding pattern?  Will this barrier planting make things as difficult and confusing as possible, less conducive to buffet feeding , more difficult, and energy demanding?

Here at Green Alchemy farm in Pennsylvania, Goldfinches are the primary granivorous birds attacking our oil-seed sunflowers. Many Goldfinch Ethology studies have shown increased feeding with flock size, less vigilance (watching out for predators) individually ,but more with the combined flock……more eyes to watch out. However, the trade-off is that more energy is utilized while flying more to find an untouched food source. Moreover, Increased vigilance behavior(watching out for predators)leads to decreased feed intake. Also, REDUCED HABITAT VISIBILITY creates more vigilance/nervousness and less feeding!! (Gluck,E.Oecologica,Berlin,1986,71:149-155)

In this study, the barrier strips were 8-9 foot tall organic corn and 7 foot tall organic sorghum sudan grass that towered over the sunflowers, but both were of use for on-farm benefit or for sale to outside markets. However, both these crops must reach a height of at least 2 feet above the organic oil-seed sunflower plants during the post sunflower bloom to harvest period.

All sunflowers, corn , and sudangrass plots were planted into a roto-vated green manure of cereal-rye, mammoth red clover, and Austrian winter peas planted in the previous October of 2015. 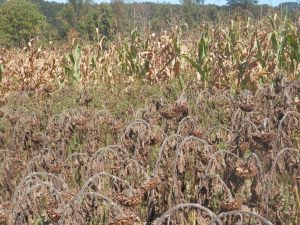 The sudan grass was drilled on June 4,2016 ,at a rate of 50 pounds per acre to encourage a finer stem for hay(picture#6) 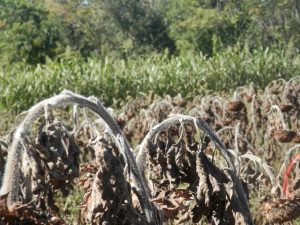 Similarly, two Control plots of Daytona Sunflowers were planted at the same rate, on 36” rows and approximately same acreage (Plot#1 : 72,562.5 sq ft,  Plot#2: 48,640 sq ft) as the total Experimental plots (Plot#1: 77,875 sq ft, Plot#2: 47,500 sq ft) of Sunflowers, but in a single uninterrupted field. All sunflowers , corn , and sudangrass were planted into a 2 week- aged, rotovated green manure of cereal-rye, mammoth red clover, and Austrian winter peas planted in the previous October of 2015.  The cereal-rye was planted at 2 bushels per acre, Austrian winter peas at 50 pounds per acre, and the mammoth red clover at 10lbs per acre with a grain drill.

In the Spring of 2016, 2 tons of Arogonite were broadcasted as a soil amendment (based on Fall 2015 soil test) on Plot#1's Experimental and Control plots.  Side-dressing of all corn and sunflowers was performed at planting with Fertrell organic fertilizer 3-4-7 at a rate of 350 lbs/acre. The Fertrell 3-4-7 was also broadcast over the sudangrass plots prior to drilling. Two cultivations of the corn and sunflowers were performed with a Farmall C once in June and once in July 2016. Two cuttings of hay were performed on the sudangrass on July 16 and September 16, 2016.

We performed random sunflower sampling 3 times during the study on the same plants between bloom and harvest (8/20/2016,9/4/2016 and 9/10/2016). This would mean labeling and sampling between the R7 and R9 reproductive stages of the sunflower plant (see factsheet Table#1) sunflower-growth-stages-a1145. This was performed identically in all fields at the same locations with the same 50 plants (25 control and 25 experimental) at each of the 3 samplings. The percent of Bird damage to the seed head  (see standard for assessing seed loss in Table #2) bird-damage (picture#1 and #2) ... 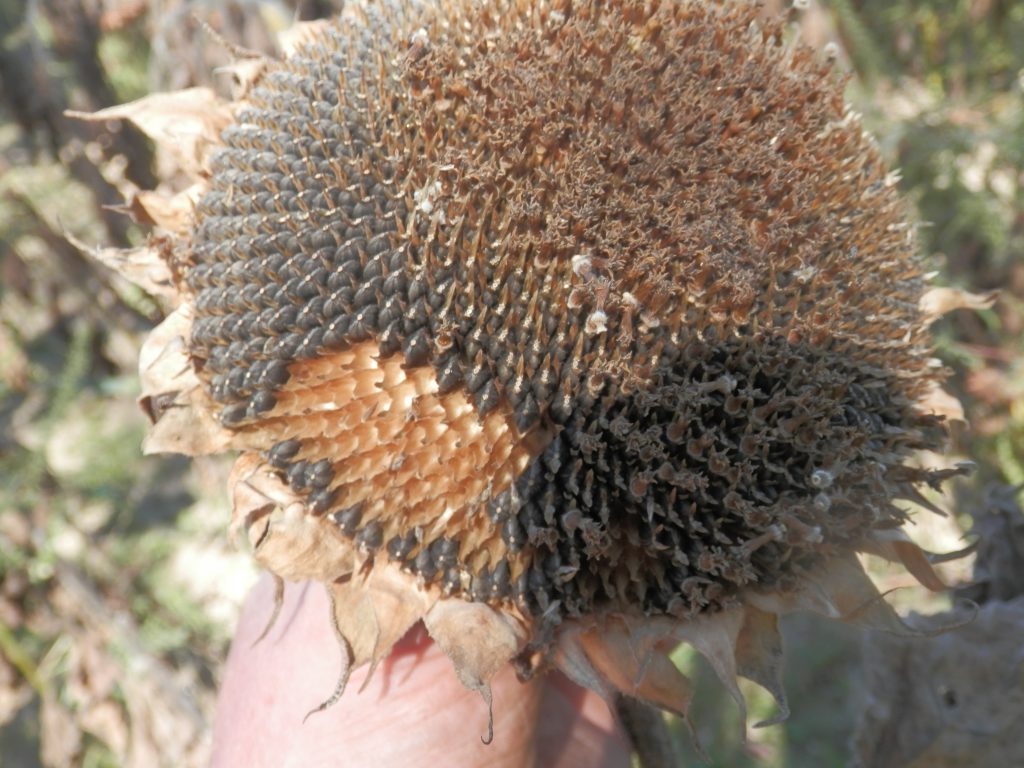 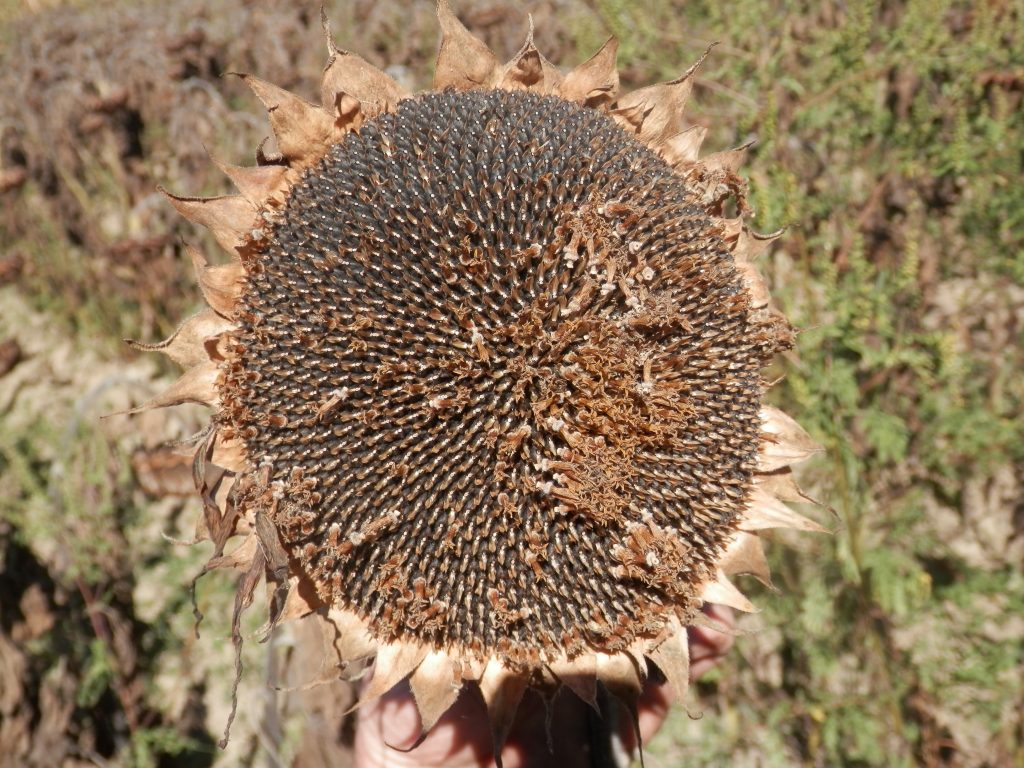 ...and the stage of development (see Table#1) was documented . The purpose of the 3 measurements was to determine if Barrier Strip- Cropping helps mitigate bird depredation in early, mid and /or late seed maturation.Harvest of the Sunflowers occurred on September 20th on Plot#1 and September 24th on Plot#2.

Our data was collected and placed in 6 tables:

Therefore, with this novel SARE study we have shown a benefit to the implementation of barrier strip-cropping in oil-seed sunflower cultivation using corn and sudan grass.

Therefore, by planting high barrier strips of agriculturally useful crops in order to channel birds away from the agronomic crop, will decrease flock sizes.  It is hypothesized that this is accomplished by  decreasing visibility forcing the birds to be more vigilant with less feeding and ultimately making their  bird depredation energy demanding, inefficient and confusing on oil-seed sunflower fields.   The barrier strips need to be  8-9 foot tall organic corn (picture#3) 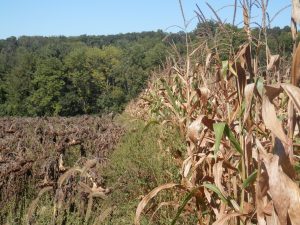 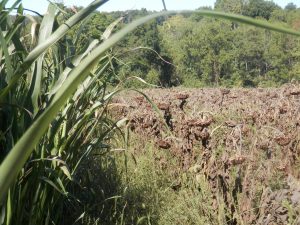 Many modalities have been instituted in the past and present to address bird depredation on oil-seed sunflowers.. Initially, beneficial  physical characteristics of the sunflower plant itself were selected into the plant to stifle bird feeding. Again, developing a “bird-resistant” variety of an oil-seed sunflower would be the perfect answer to this problem. Some morphological features bred into oil-seed sunflowers that would be useful would be concave heads, long bracts, heads that face to the ground, a head to stem distance greater than 6”, and physical seeds with tough/fibrous hulls tightly held in the head (Darfitt,1984).  Indigenous chemical compounds like  anthocyanins  in the hulls of the seeds may act as a “taste repellents” (Mason et al ,1985) Studies have demonstrated the benefits to these characteristics (Dolbeer et al), however, selective breeding has not been able to produce commercial seed lines with these characteristics but also linked to high yields and high oil-content!  It has been generally accepted that the ground –facing  or downward bending seed heads have some bird feeding resistance by only allowing birds to feed on upper/outside seeds.  Most commercially available hybrids possess this characteristic.

Non-chemical techniques can be advantageous because there is no need for government registration and generally are economic and have low technical characteristics. All these techniques are made to scare the birds away from feeding by challenging one or all of the bird’s senses. One such modality that has shown promise is the use of “reflecting” tape or ribbon made of Mylar which flash in the sunlight and roar in the wind scaring the feeding birds (Dolbeer et al,1986). Propane cannons manufactured by ZON industries are effective in producing  a  high decibel  blast to scatter unsuspecting birds. Hand held laser lights (Homen et al,2010), artificial owls , suspended balloons with facial patterns, and recordings of bird distress calls have also been tried. All of these modalities generally have partial short-time success  , but all are susceptible to one weakness….TOLERANCE OVER TIME.

So, this leads us to the use of chemical techniques. Commercial products with 9,10  anthroquinone  (AQ)  ,a chemical irritant to the granivorous birds’ gastro-intestinal tract  has shown some efficacy and is licensed under the name Avipel (50% AQ) but is not currently licensed for ripening crops.(Avery,2003; Werner et al 2011;Avery et al 1998; Werner and Clark ,2003)  . However , attaining the right concentration ON THE SEED over extended periods of time with one application has been inconsistent(Kandel et al 2009;lNiner,Linz,Clark 2013) . Spraying also requires government permits, protective gear for the farmer using the sprayers or airplanes to apply the product. The major problems with spraying these agents on a field of sunflowers is trying to contact seeds on a downward facing seed head,  penetrating the agent to seeds that are covered by adherent flower petals which create a biological barrier. Moreover, Organic certification is not permitted with these agents! Some commercial sunflower  producers  will spray ROUNDUP(glyphosate) on mature oil-seed  sunflower heads  at physiologic maturity to facilitate quicker  dry-down  and allowing earlier ,faster harvest to limit the bird damage. Again, this modality is not available or likely embraced by the organic- sunflower  producer. So, what is left?

The concept of limiting bird feeding by cultivation techniques is obvious , but has only been documented with the North-South planting of sunflower rows (Due;Foth;Meyer,Sunflower Magazine, 2011). This technique allows  the fixed, East facing sunflower heads not to touch adjacent plants limiting easy plant to plant movement of feeding birds. In the N-S  planting , the East facing heads would not touch the plants in adjacent  rows because of the  distance between plants in the standard 30” row planting.  The study of barrier stripping as obstacles in oil-seed sunflower fields has not been studied as far as I know!!

Therefore, with this novel SARE study we have shown a benefit to the implementation of barrier strip-cropping in oil-seed sunflower cultivation using corn and sudan grass.

Through this study we have added a reasonable agricultural modality for Organic sunflower producers to limit seed losses from birds. This is an easy practice to integrate other agriculturally useful crops into a diverse, mixed crop/animal, small farm production system without resorting to chemicals and the loss of time in their spraying.

At Green Alchemy Farm, we have continued to search for the promotion of Sustainable agricultural principles in oil-seed sunflower production. This valuable North American-native plant  has unique non-GMO characteristics, perfect for organic/sustainable production.  At this time we recommend early planting (mid-late May) to allow earlier fall harvesting: limiting bird damage ,easier combining,and allowing for the planting of a green manure. Recommended spacing of 36" rows at 28,000 seeds per acre when cultivating ( with 2-3 cultivations) and 30"rows for Roll Down Rye,no-till planting. The use of a cereal rye, Austrian winter pea, and mammoth red clover Green Manure has been successful in providing adequate nutrient qualities for the sunflower plant with or without fertilizer side-dressing at planting. We do 2 seasons of sunflowers then rotate into oats and hay.The critical control of groundhogs and deer control is important.

But lastly, bird Control is paramount! Cannon, wire reflecting tape, and faux owl repellants all lose their efficacy through bird tolerance after their initial institution. Use N-S planting if possible and try to get ground facing cultivars to inhibit bird feeding.  BUT now lastly, use Barrier Strip-Cropping to help inhibit this scourge to the Sunflower farmers yields.