The purpose of this project was to investigate whether edible weeds (wild plants that grow in tilled fields or disturbed field margins) could serve as supplemental market crops for some farmers in the Northeast. By partnering with ten farmers who have some experience incorporating wild foods into their crop plans; conducing an online farmer survey to assess interest and knowledge of edible weeds by regional growers; experimenting with edible weeds sales on our farm, and gathering information through literature review and interviews with experts, we sought to understand whether edible weeds are a sustainable, supplemental income source for some farmers.

We researched, wrote, and disseminated a PDF resource guide to help farmers sell edible weeds. The guide addressed how to harvest, price, and sell edible weeds, integrate them into a weed management plan, and incorporate them into a crop plan. By partnering with 10 farmers to collect data and conducting a survey of 119 farmers throughout the Northeast, we investigated edible weeds sales to understand best management practices and potential challenges. These findings, along with supporting educational content, made up the resource guide.
Content of the guide includes: identification guide to 14 common disturbed soil edible weeds with nutritional information, flavor descriptions and culinary uses; harvest information for wild vegetables by category: roots, shoots, leaves, flowers, fruit, seed; foraging safety and legality overview; tips on incorporating edible weeds into weed management plans; directory of resources for wild food research; wild food recipes that farmers can bring to market; case studies detailing different approaches to edible weeds on farms; interviews with agriculture and science professionals who work with wild foods; potential environmental benefits and concerns.

Overall, the project succeeded in its original goal: we researched the use and marketability of edible weeds as supplemental farm crops and created a resource guide for farmers on how and why to consider edible weeds as market crops. The guide is available online and distributed throughout the Northeast. This resource fills an information gap, as no materials for farmers who want to market edible weeds were previously available. Our biggest outreach highlight was a presentation about this project at Northeast Organic Farmers Association winter conference. Between 50 and 60 people attended the workshop. Audience members asked a lot of questions and the presenter received many positive evaluations following the talk. Outreach is ongoing, as the guide is now available as a free PDF download. The project technical advisor will be distributing a press release about the guide through Cornell Cooperative Extension outreach channels. 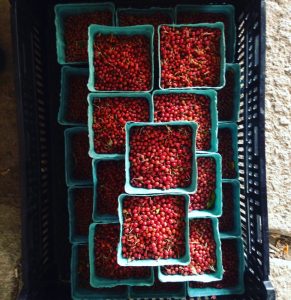 The main questions this project sought to address were:
-Are edible weeds a sustainable supplemental income source for farmers?
-What are the best methods of selling and managing edible weeds on farms?

There is growing interest among the Hudson Valley farming community to bring edible weeds to market as supplemental crops. This interest appears to be largely fueled by customers (both chefs and direct market buyers) who are increasingly more interested in and aware of wild food and foraging. The reason for this interest is varied: from healthy eating pursuits, to ecological concerns, to trends in gastronomic novelties.

Edible weeds can bring supplemental income to the farmer, however, are not prioritized over cultivated crops. Potential reasons include: 1) difficulty in planning the harvest timing of the crops, as they are self-sown and untended; 2) difficulty in scaling-up these crops, as they are free-ranging; and 3) the unpredictability of a marketing outlet, as they are a niche product. The primary customers for lesser-known edible weeds seem to be mid-scale and upscale restaurant chefs. Farmers who sell in metropolitan regions seem to have some advantage in selling these unusual crops over growers in more rural areas, likely due to the volume and diversity of customers. Better-known edible weeds, however, are popular among a number of large immigrant communities, and - being hard to source in groceries - also have great potential as farmers’ market crops. Additionally, some farmers whose operations are far from centralized markets, have had great success incorporating edible weeds as ingredients in their value-added products.

Selling edible weeds as supplemental farm crops appears to be more popular among beginning farmers or on small-scale farms. Some farmers interviewed for our research believe that edible weeds are most useful in the early stages of a developing farm business, as they can diversify market offerings and outlets, especially in the leanest part of the growing season (early spring).

Many common weeds farmers battle with are the very ones popping up on restaurant menus, farmers’ markets, and pages of magazines and newspapers around the country. The market potential for edible weeds is expanding and some farmers are well-positioned to take advantage of this supplemental income, as they have disturbed soil (a favorite habitat for edible weeds) and a business set up for selling produce. For farmers, bringing edible weeds to market can diversify production, increase the dollar-per-acre yield, offset labor costs, and potentially reduce the overall weed seed bank. For consumers, edible weeds offer new flavors and nutrition otherwise hard to get from cultivated crops. Environmentally, weed crops require no input of fossil fuels or soil amendments and can raise public awareness about organic management of invasive species through consumption.

We are researching the use and marketability of edible weeds as supplemental farm crops and creating a resource guide for farmers on how and why to use edible weeds as crops. The guide will be made available online and distributed throughout the Northeast. We hope this work empowers producers who wish to add edible weeds to their harvest lists.

Golden Roots is a four-acre perennial crop farm, specializing in medicinal and culinary herbs and mushrooms. It has been in operation since May 2014. The primary sales venue is wholesale to herbalists and herbal suppliers.

Edible weeds varieties harvested from participating farms in 2017 and 2018 included:

Regional survey findings have revealed Purslane (Portula olearacea) and Stinging Nettles (Urtica dioca) to be the most common edible weeds species sold by farmers. The top three sales venues for edible weeds are (1) farmers’ markets, (2) restaurant sales, and (3) CSA shares. The majority of survey respondents identify annual vegetables as their primary crops. All but one response came from small farmers (under 231 acres) and over half came from growers managing one to 20 acres. Some of the most common barriers to edible weeds sales that respondents cited were (1) efficiency of harvests versus returns and (2) lack of consumer knowledge about edible weeds as novel foods and a need for education.

We set out to investigate two questions.

We conclude that "yes," edible weeds are an appealing supplemental source of income for some farming businesses, however, the primary benefits of weedy wild crops may go beyond economic. Edible weeds are a particularly important income boost for new vegetable farmers who want to boost the diversity of vegetables offered to customers or who are limited in the lean seasons by lack of season-extension infrastructure. We also learned that some weeds offer diverse environmental benefits to the overall farmed landscape. It is difficult to quantify the impact of this, but it is clearly a benefit to the farm business. Finally, we learned that through enthusiasm for weeds from diverse customers (chefs working in fine-dining to New American refugees), edible weeds greatly support social relations and community building for many farm operations.

2. What are the best methods of selling and managing edible weeds on farms?

We have answered this question comprehensively. An overview of existing methodology used by different farmers and suggestions for future expansion and improvement are outlined in our resource guide.

In April 2018, writer Marie Viljoen interviewed the project coordinator and introduced this study in her article, "These 10 Invasive Plant Species Are Surprisingly Delicious" in Saveur Magazine.

In September 2019, the project coordinator lead a workshop about edible weeds at Whistle Down Farm in Hudson, New York.

In January 2019, the project coordinator was interviewed about the project on the Farm to Fork radio program.

Learning how many other farmers are utilizing edible weeds as crops regionally and that customers receive these foods with enthusiasm has given me confidence to continue bringing novel crops to market. Additionally, providing resources that were not otherwise available to fellow farmers has let to additional collaborative learning opportunities, from workshop presentations to informal consulting conversations.

We answered the original questions we set out to investigate.

Our data collecting and analyzing methodology was sound and I would not change much about it. One shortcoming was that we asked for a time commitment from farmers during their busiest season. Even though we provided a modest stipend in exchange for their time, it was clearly still difficult for many of them to take time away from the rhythm of seasonal tasks to fill out data sheets and be interviewed. Looking back, it would have been best to ask for minimal involvement from growers in the growing season and reach out primarily in winter.

Additionally, our original timeline, although realistic, was challenging to juggle along with other full time commitments. The two main parts of the project that took longer than anticipated were collecting all necessary data from partner farmers and compiling the findings into a form useful to a wider farming audience.

I will continue to utilize edible weeds as supplemental market crops and as will nine out 10 partnering farmers. One important lesson that was revealed through is project is that the benefits of weedy wild foods are not primarily economic for most farmers, but offer varied benefits beyond that, including: risk abatement for new farmers, ecological benefits, community building.

I feel our resource guide will be most beneficial to small and medium organic (practicing, not necessarily certified) vegetable farmers whose businesses are near metropolitan areas (New York, Boston, Philadelphia) or who have established value-added product lines.