To meet the growing demand for locally produced food year-round, many farmers have turned to protected agriculture for season extension. The 2017 Census of Agriculture reports approximately 10,849 farming operations growing under protected agriculture – a 24% increase from 2012. Of those operations, approximately 28%, roughly 3,000 farms, are located in the Northeast SARE region. Growers have numerous options ranging from high tunnels to low tunnels, greenhouses, and hoophouses, which all vary in price, labor to construct, stability, and return on investment. This project seeks to explore the economic feasibility of caterpillar tunnels, an under-researched season extension option. Caterpillar tunnels have been touted as having “the fastest possible payback period per initial investment of any growing structure”, despite there being no empirical evidence to support this claim. This study will track all inputs and outputs involved in the production of cold hardy greens and two warm season crops in two caterpillar tunnels and compare side-by-side to data collected from in-field production of the same crops. The goal of this project is to generate empirical data on the profitability of caterpillar production thus enabling growers to make better informed, science-based decisions when selecting season extension practices for their operations. Results of the project will be disseminated through two on-farm field days, published as a farmer-oriented article, and shared at a local conference.

The project seeks to determine the economic feasibility of caterpillar tunnel production in small-scale urban farming in the Northeast. More specifically, it will answer the question, Is the use of caterpillar tunnels economically beneficial for small-scale urban farmers? The objective is to determine whether the benefits and returns will outweigh the input, cost, and potential challenges associated with caterpillar tunnel management and production, and how quickly farmers should expect a return on investment. To answer this question, we will measure all inputs and outputs of both caterpillar tunnels and field production in a side by side comparison over two seasons.  The following is some additional information we hope will be gained throughout this project:

-How quickly might you see a return on your investment?  (Break-even point).

-How do profits per square foot compare in caterpillar tunnels v field production?

-Does caterpillar production result in higher yields and/or better quality of crops compared to in-field production?

-How, if at all, can profits be increased during shoulder seasons?

This information would be beneficial to established farmers who have not yet invested in this type of equipment, as well as new farmers who are budgeting for planned projects.

According to the United Nations Department of Economic and Social Affairs, more than 55% of the world’s population lives in urban centers and in North America alone, more than 80% of the population resides in cities. Urban and peri-urban agriculture can help to increase sustainability and security of the local food supply and meet a growing consumer demand for locally produced foods. However, urban and small-scale growers, especially those in the Northeast where growing seasons are shorter, face unique challenges in meeting the demands of growing urban populations - one of the greatest being profitability.

As John Hendrickson stated in his report published by the Center for Integrated Agricultural Systems (CIAS), “Growing produce is not the biggest hurdle facing most fresh market vegetable growers; earning a reasonable living poses the greatest challenge.”  He further concluded that keys to financial success for small-scale growers included utilizing techniques and tools to keep expenses low, in addition to the importance of implementing season extending techniques and technologies. This is especially true of farmers in the Northeast who experience colder climates which limits the growing season.

Varying forms of season extension have pros and cons, many of which have been explored by farmers and researchers alike. A substantial amount of research has been conducted on the economics and profitability of high tunnels, however high tunnels may be an expensive barrier to entry for urban and small-scale farmers who are looking to implement season extension on their farms. Furthermore, high tunnels occupy a lot of space and though movable high tunnel models exist, in practice, most are stationary. For urban and small-scale farmers who lack space and/or rent land, this may be yet another hindrance. For farmers who do utilize this method of protected culture, many prioritize growing high value crops, like tomatoes year after year without rotation. The permanence of the structure, paired with the lack of crop rotation, intensive fertilization, and frequent tillage lead to numerous soil health issues including compaction, reduced organic matter, high salts, and soil-borne diseases. Research conducted by Dave Waterer at the University of Saskatchewan has shown that though high tunnels can produce higher quality crops and higher yields, it can still take anywhere from 2-5 years to begin seeing profits. Too often high tunnels are poorly managed resulting in higher yields in the field than in the tunnels themselves. Low tunnels, often constructed with wire hoops and floating row cover, are relatively inexpensive, allow for mobility, and serve as a barrier to pests, but may not provide the same benefits as high tunnel production.

Caterpillar tunnels are marketed as an inexpensive, moderately stable/semi-permanent option. They are boasted as tools that are inexpensive, easy to construct and cover, have excellent air flow, improve yield and quality of field-grown produce, and according to one source have the “fastest possible payback period per initial investment of any growing structure”. However, there is a lack of empirical data to support the economic feasibility of caterpillar tunnels in urban and small-scale production.

We propose a two year study to determine the economic feasibility of caterpillar tunnel production as an alternative method of season extension on urban and small-scale farms. In order to assess the real economic benefit of implementing this type of protected culture on urban and small-scale farms, the study will use the basic equation of Profit = Income - Expenses to determine the break-even point and profitability of caterpillar tunnel production.  In the city of Buffalo, there are currently 25 urban and peri-urban farms in the region that are growing on land areas of 3 acres or less. 2017 Census data from Erie County reports that there is a total of 970 farms in the region, with 17%, or 165 farms, growing on 9 acres or less. An equal amount of farms reported practicing no-till or reduced till, and 28 are farming organically. Expanded at the state level, small farms of 9 acres or less make up 10% of the total, which equals roughly 3,350 farms, according to 2017 Profile of Agriculture from the NYS Comptroller.  If caterpillar tunnels could be a means to reduce the barrier of entry for these urban and small-scale growers into season extension, this information will be invaluable as it may help them to make better-informed, science-based decisions on which season extension techniques are the best fit for their operations. 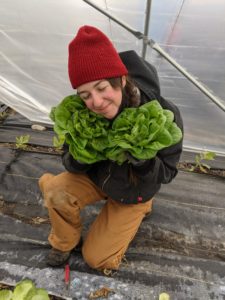 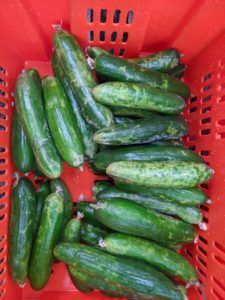 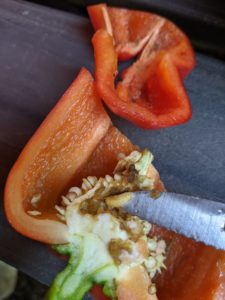 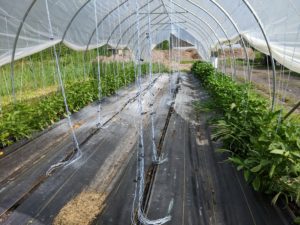 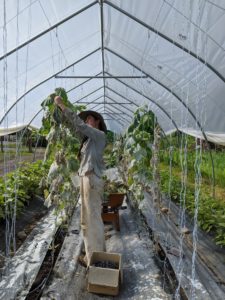 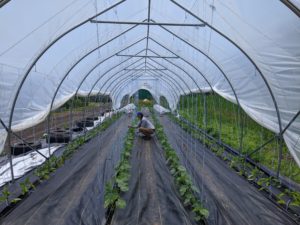 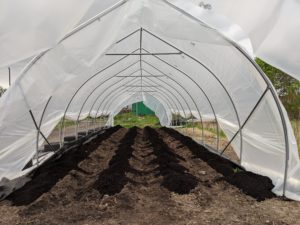 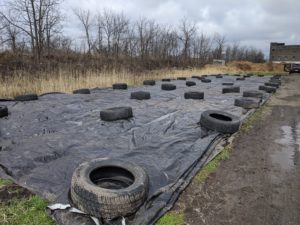 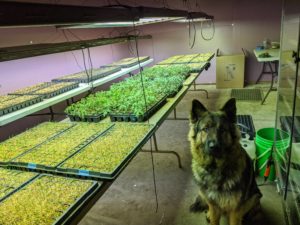 During the first year of the project, two unheated gothic style caterpillar tunnel kits were purchased from Farmers Friend LLC that measured 14’ wide, 50 ft. long, with 5-ft bow spacing. Each tunnel was covered with 28-foot wide, 6 mil green­house plas­tic with a 4‑year rating.

On March 23, 2020, 100 red bell pepper seeds and 100 eggplant seeds were treated with inoculant were sown into 50 cell trays containing a compost based potting soil. On April 6, 2020 100 red bell pepper seeds were seeded in the same manner for the in-field control. On April 20th, the root balls of the peppers and eggplant for the caterpillar tunnels were inoculated and the seedlings were transplanted into 4” pots. The control transplants from April 6th were potted up in the same manner on April 27th.

The site for the caterpillar tunnels was covered with silage tarps for 5 weeks in early April, to manage weed pressure on the site. On May 16th, the tarps were pulled off and the site was treated with black woven ground cover around where the perimeter of the structures would be to manage weed pressure and the two tunnels were framed and constructed. On May 21st, the plastic coverings were installed and four beds in each tunnel were formed.

The following data was recorded, throughout the first year of the project:

The inputs and outputs listed were recorded for all activities in the caterpillar tunnels and for any activities with regards to the in-field comparison crops.

Throughout the 2020 growing season, the first year of our two year study, we observed improved yields and lengthened harvest windows in our caterpillar tunnel when compared to our field trials, though overall yields and profits were greatly reduced due to pest and disease pressure, despite our best efforts to protect the crops. Pest and disease pressure was widespread throughout our WNY region, especially impacting the cucurbiteae family.

One advantage of planting the cucmbers in the caterpillar tunnels was an earlier planting date than our in-field controls, which allowed them to produce some fruit before they succumbed to cucumber beetle and downy mildew pressures, though yields were dramatically lower than in previous growing seasons and what we had anticipated. The in-field cucumber trials were never able to produce fruit before succumbing to pest and disease pressure.

Pepper plants were large and healthy, though they were later producing fruit and think this may be due to high temperatures in the caterpillar tunnels. Once temeratures cooled in the fall, production increased and we harvested well into October while the in-field peppers had already been hit by frost. We did have pest pressure in the pepper plants as well which reduced the amount of marketable fruit.

Late season lettuce that was planted in the caterpillar tunnel, which resulted in earlier and larger yields when compared to the in-field trials. Heads were larger in size and earlier to harvest. This was promising and we anticipate using the caterpillar tunnels for early spring plantings in the second season of our trials now that they are constructed.

The amount of inputs that went into the caterpillar tunnels in the first year trial were far greater than the outputs. Some of this was to be expected, as cost of the tunnel materials and labor for construction and bed preparation are exclusive to year one and factor heavily in the equation. Given the low yields in the tunnels due to pest and disease issues, the outputs were heavily effected and we have not seen profitability or a break-even point with the tunnels.

We anticipate that year two will begin to see greater profitability. Now that the tunnels are built, we will be able to better make use of season extension, adding an early season crop before the peppers and cucumbers. With the knowledge acquired from the first season, we plan to make adjustments to planting dates, varieties used, and plant protection methods in order to ensure better yields. We will more closely monitor temperature in the tunnels and its effect on the plants.

Over 25 participants of an urban agriculture tour came to our site to tour the farm in September 2020. The participants visited the caterpillar tunnels and were briefed on the ongoing trials and our findings thus far. The interest in this study has since resulted in a number of urban farmers reaching out to me to ask questions about our experiences and increased interest in caterpillar tunnels as a season extension tool. Mayda Pozantides, farmer, also presented at NOFA-NY's Winter Conference in January 2021 and spoke for several minutes about the SARE Farmer Grant and the research being conducted at the farm. She plans to reach out to NOFA-NY to present on the findings of the trial at next year's conference. In addition, at the end of the trial, materials will be created and distributed through urban ag networks in Buffalo and Erie County, and we will be inviting another tour group to come this summer and visit the site of the trial.