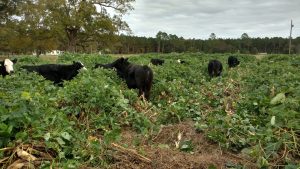 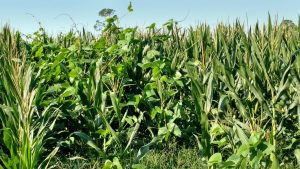 Three acres were planted with corn and climbing beans in mid April, 2017. Dixie 20 was used in 2016, however, this variety was not available locally in 2017. Because a roundup ready variety was not necessary, a non-Roundup Ready Pioneer variety was used. Velvet bean seed were ordered from Petcher Seeds in Alabama. Based on recommendations from Dr. Petcher, corn was planted on every row and every other row had velvet beans interplanted with the corn. This was done using Cole planters with dual hoppers. Rows were on a 36" spacing. Fertilizer was applied at the recommended rate for corn. The field was cultivated once for weed control. After the corn was about 18" tall, ammonium nitrate was applied at the recommended rate and the stand was "laid by".

Although there were periods of drought during the summer months the corn and beans developed well and never did wilt. In 2016, lab lab seed was used because velvet bean seed was scarce. The lab lab did not flower until right before frost and never produced seed. The velvet beans did not begin flowering until October. 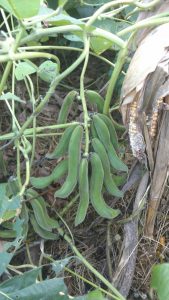 Although a decent amount of seed pods were produced, they did not have adequate time to dry on the vine before the first frost. Because of this, many pods showed signs of deteriation by mid winter (see photo at left). 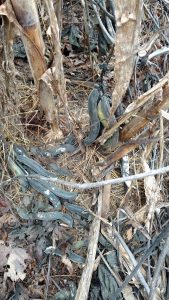 Ten head of beef cattle with calves along with three goats were strip/limit grazed on the plot beginning on November 15. This was approximately two weeks later than the start of grazing in 2016. Each week, the strip wire was moved up approximately 10 yards. By limit grazing, the animals were able to graze the plot until early February. Cattle were fed their normal ration of free access bermudagrass hay during this time. Based on body condition, no supplemental feed was necessary until late December. Around December 27, cattle were given three pounds/head/day of 12% protein beef ration. 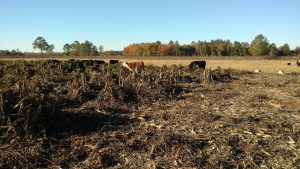 I first got the idea for this project after talking with several people who grew up on farms prior to World War II. These men indicated that grazing corn and velvet beans were a regular part of the farming operations in the South at that time. With a move to find more sustainable methods of production, I felt that this "older" method needed to be revisited. I wanted to find if this method were especially applicable for small producers such as myself who lacked time as well as feed storage facilities.

The first objective was to determine how many hours of labor were needed to strip graze cattle on corn/climbing beans and how does this compare with the amount of labor to purchase and feed commercial feed. I found that by grazing the corn and beans, my labor was decreased during November and December. Grazing the corn and beans reduced the amount of hay fed during this time and no supplementation was given until nearly the end of December. I would estimate that 1-2 hours/per week were saved during this time.During January, there was no significant reduction in labor as supplemental feeding was done during this month. I found that the results from 2017 were similar for this objective to the results of 2016.

The third objective was to determine how much nitrogen was added back to the soil after the first season. Obtaining soil tests for this has been problematic and at this time, results are still pending.

I was well pleased with the results of this study. I believe that the two-year study was warranted as the second year backed up results from year one and also showed benefits of the different planting method. I believe that my labor was reduced and cattle body condition was maintained. I further note that expense of wintering my cattle held steady.

One negative point that has not been addressed, though, is that this type of system takes land out of production during the warm season. On my farm, three acres was set aside for this project. This study does not address the lack of grazing this land from April-October. This problem was somewhat compounded in 2017 due to a lack of summer rainfall.

Because of the success of the project, I plan to continue this on my own operation, although I will seek additional land so as not to inhibit summer grazing.

At the time of this report, I have contacted my County Agent, Joe Slusher, about presenting my findings at local cattlemen's association meetings in our area. Additionally, I am contacting Georgia Young Farmer Association advisors in southeast Georgia about speaking at their chapter meetings this summer. A detailed article with supporting photos will be sent to the Georgia Young Farmers Association this May for publication in their quarterly magazine.