Stony Creek Colors sells clean and safe natural dyes to the textile and fashion industries, allowing its customers to offer environmentally conscious premium products. Through its flagship natural indigo product, the company has developed and proven a complete agricultural supply chain to replace synthetic dyes with plant-based drop-in solutions. Innovations across the complete crop and processing value chain allow Stony Creek to sustainably produce plant-based dyes with full transparency and authenticity, meeting the technical performance and volume requirements of textile mills and fashion brands worldwide without compromising product integrity. In 2015, Stony Creek Colors began partnering with a network of local farmers to plant and farm this alternative crop, and the company has relied on their collective knowledge and expertise to ensure a high-quality product coming from the field into the processing facility on a daily basis. Currently, indigo is grown as a transplant crop using greenhouse, planting, and cultivation assets which exist within this network of largely tobacco farmers and allow for an easy transition between tobacco and indigo farming. As such, the company’s indigo is grown as a transplant crop in a method similar to tobacco production, where seed is germinated in a greenhouse or float bed, and then transplanted in the field via mechanical transplanter. Since there are no listed herbicides for indigo, weed control has initially been managed through pre-planting tillage and mechanical cultivation of the crop during the growing season, especially in early summer prior to crop canopy closure. This manual cultivation process takes time, equipment, and fuel away from the farmer during the busy spring and summer season. To combat this problem, Stony Creek Colors looked to progressive farmers in the area and decided to explore strip-till and no-till transplanting for its indigo crops. In 2016, Stony Creek Colors had expanded its field production to roughly 100 acres, planted primarily in varieties of Japanese indigo (Persicaria tinctoria), and the SARE project was written with this in mind. During the subsequent seasons, one of Stony Creek Colors minor tropical crop varieties (Indigofera suffruticosa) emerged as the higher yielding indigo dye crop for the the northern Middle Tennessee area, and the company ultimately made a near-full crop change to tropical indigo by the 2019 season. For this reason, Stony Creek modified its strip-till / no-till in-field research from Japanese to tropical indigo and ultimately found success in doing so. Over the course of two seasons of in-field research, comparing conventional-till, strip-till, and no-till crops of tropical indigo, Stony Creek Colors was able to observe increased weed control in the strip-till and no-till fields with lower inputs of labor or herbicide with no observable loss in plant height, biomass, or indigo dye yield. Ultimately, as a result of the research undertaken in this SARE project, Stony Creek Colors has been able to recommend strip-till and no-till as agricultural best practices for our indigo farmers, resulting in 140 acres – over a third of the 2019 crop – being planted this season using strip-till and no-till transplanting.

The goal of this project was to identify and validate methods for transplant-based production of indigo crop which are low impact with regard to chemical addition and soil runoff and which are consistent with the sustainable production values of Stony Creek Colors. Particularly, the evaluation of strip-till / no-till methods and cover crop selection for Japanese, and later tropical, indigo production was evaluated to determine efficacy of weed control and impacts on the indigo plants with regard to yield and growth rate. The key objective and deliverable for this project was an evaluation and recommendation to farmers for optimum indigo transplant methods including cover crop selection, field preparation, plant density, and weed suppression methods without significant use of chemical amendments or soil degradation.

In 2016 Stony Creek Colors built out and commissioned its industrial processing facility in Springfield, TN, and expanded its total planted acreage to nearly 50 acres – representing its first move into commercial production. At this time, the company’s predominate crop mix comprised varieties of Japanese indigo (Persicaria tinctoria). At the Stony Creek research farm in Greenbrier, TN, the company also planted roughly two acres of tropical indigo (Indigofera suffruticosa) for research purposes. Data collected in 2016 from the Stony Creek research farm relating to the growth rates, biomass yield, and indigo dye yield initially indicated that this tropical indigo might be a substantially better performer than the company’s Japanese indigo, and as a result, significant research and development resources were divided roughly evenly between the two crops. By the end of the 2017 season, results continued to demonstrate tropical indigo as the more valuable crop, and as such, both research and production efforts were reallocated with a bias toward tropical indigo crop development, including transplanting into cover crops with strip-till and no-till applications. In each experiment, initial experimental setups were controlled and recorded including existing cover crop, date of burn-down (if any), transplant in-row and between-row spacing.

As illustrated in Table 1., Stony Creek Colors selected farmers from the company’s crop production network who were transplanting tropical indigo using conventional-till, strip-till, and no-till methods, each with different cover crops (with the exception of conventional tillage). Throughout the growing season, Stony Creek evaluated indigo dye yield potential from representative plants in each field by carrying plant samples through full extractions and measuring the resulting dye in each case. These experiments were carried out in production fields which were harvested typically three times per season, stripping leaves from stems and allowing for vegetative regrowth. In most cases, select plants were allowed to grow unharvested until the end of the season for comparison, and this data is presented as end-of-year leaf weight and plant weight. It should be noted that the company was rapidly researching and developing best practices in dye analyses, sampling protocol, indigo crop production, and harvest methods and schedules at these production fields. It should also be noted that environmental variability at each location as well as year-to-year variations are inherent to the collection of agricultural experiment data. While it is difficult to conclusively identify trends within the limited dataset to rank and grade each method against the others, it can be concluded that with regard to the yield and health of the plant strip-till and no-till transplant methods did not adversely affect the biomass yield or indigo dye yield of the crop.

With regard to the weed suppression goal of planting into a cover crop, each method worked sufficiently well at reducing the weed competition, with the exception of the 2017 no-till field at cooperator Jenkins. This was a direct transplanting into a no-till 5-way blend, and the excessive presence of weeds was likely due much more to a miscommunication of best practices established at that time. In this particular case, a substantial excess of nitrogen was applied to the field, which is not required by the legume tropical indigo, and this substantially accelerated the presence and size of competing weeds. Other 2017 and 2018 plantings were very successful, requiring minimal hand-chopping throughout the season, especially as compared to the single conventional till farm using no chemical herbicides. In the case of cooperator Bill Pearson, a strip-till farmer who produced two years of exceptional quality crops, a pre-emergent was applied prior to transplanting followed by an application of Zidua shortly after transplanting. Photos of these successful fields are shown below. 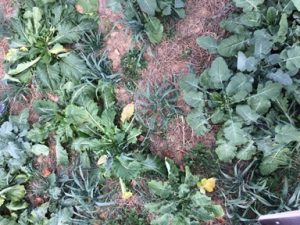 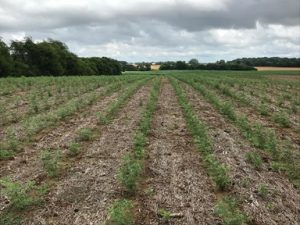 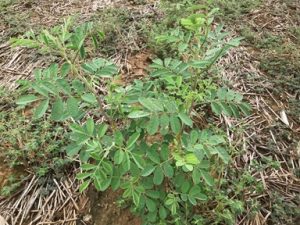 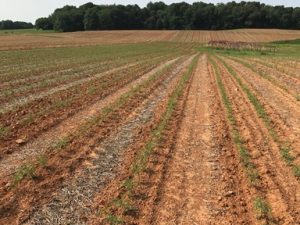 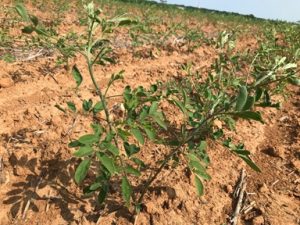 40 Farmers reported changes in knowledge, attitudes, skills and/or awareness as a result of their participation
Key changes:

As a result of the on-field experiments conducted through this SARE project, Stony Creek Colors has validated the ability to transplant indigo crops at scale using conservation tillage methods. The company is now able to recommend no-till and strip-till methods as best practices for its grower network, including what to expect with regard to timing, and cultivation and herbicide requirements. After initiating the project in 2017 and transitioning largely from Japanese indigo to tropical indigo crops, the company’s 2019 crop will include 140 acres of strip-till- and not-till-transplanted tropical indigo planted across four farmers who have long histories transplanting tobacco at scale. This represents over a third of Stony Creek’s 2019 crop.

Stony Creek has also determined that the presence of weeds in a harvested batch has an out-sized impact on the purity of the resulting indigo dye product. That is, as the percentage of weeds-to-indigo biomass increases incrementally, the purity of the product and the ability to predictably process a batch through the factory decrease substantially. Outside of the scope of this SARE project, Stony Creek Colors is continuing this research as it relates to increasing and optimizing crop density (plants per acre) as a function of row and in-row spacing in order to maximize both indigo dye yield per acre while minimizing the time to canopy-closure in strip-till and no-till applications. This will allow the indigo crop to more quickly shade out weeds and reach harvestability sooner. This ultimately results in higher dye yields per acre, higher purity dye product, and the process predictability that allows Stony Creek Colors to operate a multi-shift plant extraction operation at industrial scale.