Building a successful and sustainable agriculture business presents an abundance of challenges, but during the drought of 2011 we quickly realized our greatest challenge and limiting factor would be water – or the lack thereof. Drought and dry cycles are inevitable and are a result of climatic variability. Water is undoubtedly one of the most critical conservation issues of our time due to our growing population and increased pressures on our natural resources. Finding effective, affordable, and replicable methods to capture and store water on the landscape is essential not only for livestock producers such as ourselves, but for the effective long-term use of our water resources which is relevant to everyone. Subsoiling, or deep soil ripping, is a method of cutting and opening the soil with a subsoiling plow most often to break hard pans and reduce compaction. This practice is used in cropping systems but less frequently on perennial pastures. Subsoiling plows range in price based on design, but the cost of implementing this technique is minimal. In 2014 we began subsoiling pastures and the recovery was incredible. Within half a year and after receiving 6 inches of rainfall, the bare ground was reduced drastically and grass was well established exactly where we had ripped. This positive anecdotal evidence encouraged us to conduct further research to better understand this tool and its impact on the land.

To determine subsoiling's ability to improve water capture on rangelands, this study examined soil and vegetation response to subsoiling on two sites with similar soil textures (clay loam) located at Parker Creek Ranch in D’Hanis, Texas. Measurements included hydraulic conductivity at saturation, compaction, soil chemistry and microbiology, and vegetative ground and standing cover, species composition, and biomass. Strong evidence from this project and other related research indicates that subsoiling can be an effective method to capture and store water on landscapes because of increased rain infiltration. Although enhanced infiltration cannot make up for low organic matter, it can improve plant growth if other soil factors are adequate. Similar to other management techniques, implementation requires careful consideration of your goals and a systematized approach to management. 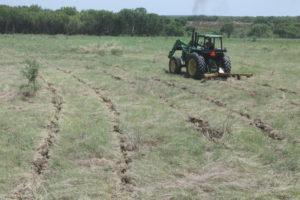 To create a strong experimental design and establish both treatment (ripped) and control (not ripped) plots on relatively similar soils, a non-invasive electromagnetic induction instrument was used to map soil properties on two different study sites on the ranch, an established bermudagrass field and a fallow field in poor vegetative condition (Figure 1). Sites were approximately 4 acres each; neither site had ever received prior ripping, and soils of both sites are characterized as a Divot Clay Loam. 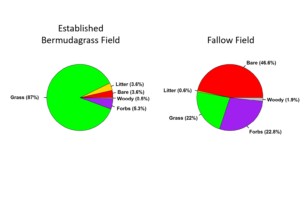 Figure 1. Comparison of ground cover prior to establishing ripping treatments (May 2018) for both the established bermudagrass field and the fallow field in poor vegetative condition, D’Hanis, Texas.

Prior to ripping, the contour of the land was determined using a laser leveler and flagged. Following these lines at intervals of 10 feet, treatment sites were ripped in August 2018 when the soils were dry to allow for deep fracturing. It is important to note timing of the ripping event will depend on the location, soil type, and weather conditions. Ideally, soil moisture should be at 50% or less of field capacity, but not completely dry, to maximize shank depth and enhance water conservation. The subsoil plow used in this study was equipped with two 29” shanks that follow directly behind the 120 horsepower (HP) tractor tires.

Loss of water through runoff and evaporation and the resulting reduction of soil water infiltration and root penetration are serious negative consequences of soil compaction.  To better understand how soil ripping may improve these conditions, soil compaction was measured prior to and one year after ripping. Measurements included bulk density, or the weight of the soil in a given volume and hydraulic conductivity of the soil surface, or how quickly water can percolate into the soil at saturation. Hydraulic conductivity of the surface was measured using the single-ring constant head method prior to and one year after ripping.  A chemical analysis of soil samples was conducted prior to ripping and microbial and chemical analyses were conducted one year after ripping.

Ground cover includes bare ground and litter as well as vegetative components made up of grasses, forbs, and woody plants. Ground cover characteristics were evaluated prior to and on three separate occasions after ripping to assess effects of ripping. Forage standing crop was harvested approximately one year after ripping to assess forage biomass (lbs/acre) and nutritive value (crude protein, digestible energy) for grazing livestock. Standing cover is important not only for grazing animals but also for wildlife because it acts as both nesting and hiding cover.  The structural importance of standing cover was evaluated by measuring visual obstruction with a Robel pole method on three separate occasions after ripping. Photographs were also taken at fixed points prior to ripping and three times post ripping to visually document long-term changes in vegetative cover. 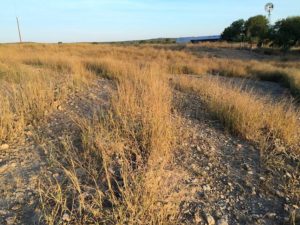 Subsoiling had the most significant impact on water infiltration. Fractures created during ripping allowed the low amount of rainfall received in this region to be more efficiently captured for vegetative use. Prior to ripping (Summer 2018), all sites had similar infiltration rates. Although ripped areas in both study sites demonstrated increased infiltration rates, ripping in the established bermudagrass site, which had high initial vegetative cover (Figure 1), more than doubled water infiltration rates prior to ripping in 2018 (Figure 2). The fallow field had less established vegetation to slow rainwater runoff and less root mass to break up the soil, preventing the increase in infiltration from being as high as the bermudagrass field.

Ripped sites had a lower bulk density, or less compaction, than control sites, but this difference was not statistically significant. Soil test reports from samples collected one-year post-ripping detected higher nitrates and ammonium in both ripped sites. The increased nitrogen could be from the disturbance influencing greater amounts of soil organic matter decomposition; and therefore, greater N mineralization at the ripped areas. Active fungi were higher in control sites likely due to less short-term disturbance. 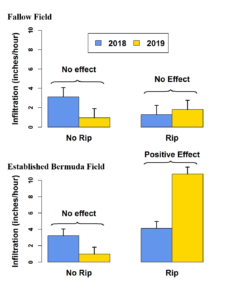 Subsoiling had no significant effect on short-term vegetative ground cover type (Figure 3) or nutritive value of the forage, although total pounds of vegetation produced in ripped sites was greater than in not ripped sites. 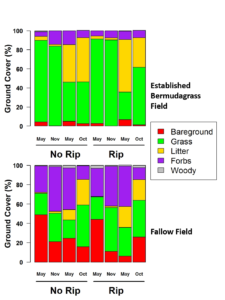 Figure 3. Ground cover from ripped and not ripped (control) treatments on the established bermudagrass field and the fallow field prior to (May 2018) and after ripping (Nov 2018, May 2019, Oct 2019), D’Hanis, Texas.

The Robel Pole method to measure standing biomass demonstrated a trend towards greater visual obstruction in ripped areas, although there was only a significant increase in May and October on the fallow field (Figure 4). This increase could have been related to tall forbs recorded on the ripped sites that were growing as a result of disturbance from ripping and a heightened effect in the fallow field where large amounts of bare ground were present. These forbs could provide both cover and a food source for wildlife. 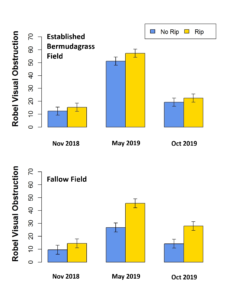 Strong evidence from this project and other related research indicates that subsoiling can be an effective method to capture and store water on landscapes because of increased rain infiltration. Although enhanced infiltration cannot make up for low organic matter, it can improve plant growth if other soil factors are adequate.

This research was conducted on two sites specifically selected to have similar soil textures (clay loam) to more precisely evaluate effects of deep soil ripping. Other studies have found subsoiling methods to be most effective on heavy to medium-textured (clay and some loams). Required frequency of ripping on any given site may vary according to soil type, vegetative cover and response, and rainfall. It is best to allow vegetation to recover before grazing with livestock. Frequent subsoiling could have a negative effect on soil microbiology, structure, and vegetation. It is important to monitor soil and vegetative characteristics to assess effects of subsoiling on soil water storage so that one can determine at what point benefits of ripping have diminished: responsible land stewardship is based on a proper frequency of soil ripping that accords with overall management goals.

Although subsoiling can increase rain infiltration, this study demonstrated the importance of prior vegetative cover by the multi-fold rain infiltration effects found in the bermudagrass field as compared to the fallow field. Poor vegetative cover is often the result of more critical soil characteristics, such as the lack of organic matter. It is important to address these other needs first before increased rain infiltration can be of value to the established plant community. Other tools, such as the addition of organic matter, may be better suited to help achieve your goals or may be needed in combination with ripping.

Continued monitoring of the study sites demonstrated in this project is recommended to understand long-term effects of subsoiling. Similar research on additional sites would be beneficial to look at the impact on a variety of soil types, slopes, and precipitation rates. More research is also needed to better understand how subsoiling affect soil microbiology and how its health effects pasture recovery post ripping.

In conclusion, this research provides evidence that supports deep soil ripping as an effective method to increase the rate of infiltration, thus capturing and storing water across the landscape.

Consultations (4) - We provided consulting services to four producers and developed whole ranch plans including recommendations for production practices, land management techniques, marketing, and financial management. The information we obtained from this project was conveyed to all four producers as we advised how subsoiling may be used on their property to help attain their goals.

Fact Sheet (1) SoilRipping_authorproof1 - We created an AgriLife Extension fact sheet publication to disseminate our project summary with the public. This fact sheet will be made available on agrilifebookstore.org, SouthTexasRangelands.tamu, and parkercreekranch.com. It will also be published on our social media sites, blog, and website.

Journal Article (1) TO BE SUBMITTED - Project data will be summarized and submitted by collaborator, Dr. Megan Clayton, to the Journal of Agrosystems, Geosciences, and Environment.

Newsletter and Blog (1) https://www.thepastoralist.blog/home/2019/1/31/sub-soiling-capturing-the-rain?rq=soil. The use of subsoiling as a management tool was a topic for one of our newsletters (emailed to our 800 subscribers) and a blog entry (received 252 views).  In the coming months we will share a summary of our results and recommendations via The Pastoralist Blog.

Tours (7) - Over the past 2 years we have hosted 4 public tours for families and 3 private tours for landowners. During the family tours, over 120 individuals learned about subsoiling as one of the many management tools we use on the property. During the landowner tours, individuals wanted to learn how to subsoil and see first hand how this management tool has been used to help us reach our goals.

Presentations (2) - We participated as a speaker at the Earth Repair Corps Permaculture Design Course  http://earthrepaircorps.org/ in 2018 and 2019. We spoke about our operation and highlighted land management techniques including subsoiling and the results from this study. 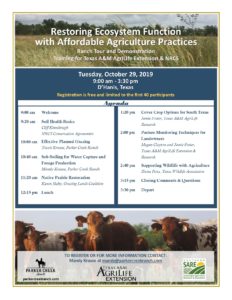 22 Farmers reported changes in knowledge, attitudes, skills and/or awareness as a result of their participation
Key changes:

Strong evidence from this project and other related research indicates that subsoiling, or deep soil ripping, can be an effective method to capture and store water on landscapes because of increased rain infiltration. Although enhanced infiltration cannot make up for low organic matter, it can improve plant growth if other soil factors are adequate.

How does this tool help producers?

1) Economic - Subsoiling plows range in price based on design but the cost of implementing this technique is minimal.

3) Social - Finding affordable, effective, and easy to implement conservation practices is essential for widespread adoption and key to ensure working lands can stay in agriculture production. If neighboring landowners can participate in collective conservation practices such as subsoiling, the benefits would be seen on a landscape-scale.