Traditional potato growers in Northeast Florida need to explore alternative specialty crops to remain economically sustainable in the world of agriculture.  Sweet potato is an alternative crop that offers nutritional advantages, versatility, and is easy to integrate into the potato chip cropping sequence.  Four sweet potato cultivars were grown for two consecutive seasons in Hastings, Florida. Marketable yields for Year 1 ranged from 5217 to 9205 lbs/acre depending on the cultivar.  Excessive rainfall during the Year 2 trial (32.4 inches) may have been the reason that the sweet potatoes did not reach marketable size.  A complete nutritional label was developed as part of the project for the newly established purple-flesh variety (Charleston Purple). Anthocyanin concentrations were 2.68 mg/100g for the purple-flesh variety and only 0.03 mg/100g for a common white-flesh variety.  Although these concentrations are not included on a standard nutritional label, they are a great marketing tool.  The Charleston Scarlett showed the least amount of plant-parasitic nematode pressure compared to the other cultivars, but further research is needed to determine if there is some genetic resistance qualities within this cultivar.  Sweet potato vines were harvested and baled as part of a demonstration for local cattlemen. The project served as an excellent model for both farmers and community members showing that sweet potatoes could be successfully grown as a rotation crop with potatoes in Northeast Florida.

There were four primary objectives associated with this project.

Objective #4: To determine if the vines can be harvested for use as livestock feed. 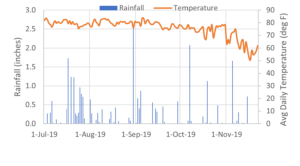 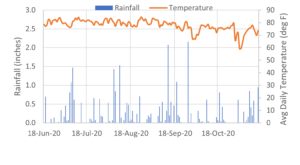 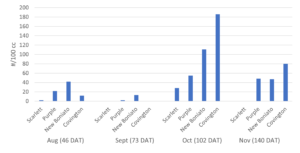 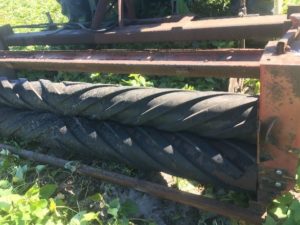 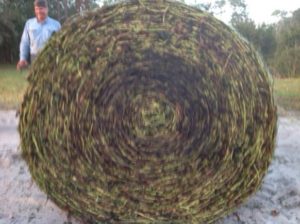 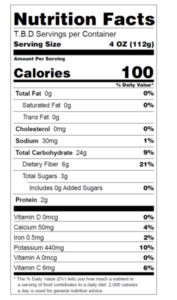 Sweet potato variety trials were planted on one acre during two consecutive years in Hastings, Florida.  Year 1 was planted on July 1, 2019, and Year 2 was planted on June 18, 2020.  Four cultivars, including one baseline (Covington) and three newly developed varieties namely Charleston Purple (aka Violet Queen), New Boniato, and Charleston Scarlett were investigated. The slips for these trials were obtained from Dr. Janice Bohac with CAREnergy.  Rainfall and temperature data was monitored during both growing seasons using the Florida Automated Weather Network Station in Hastings, Florida.

In an effort to better understand nematode pressure on sweet potato varieties, the soils were not fumigated during Year 1.  Soil and root samples were collected monthly throughout the growing season and analyzed for nematode types and counts by the UF Nematode Laboratory.  The soils were fumigated prior to planting the second year trial according to grower standards to optimize marketable yields.

During both years, the land was prepared using mechanical tilling and a fertilized at a rate of 100-60-120 (nitrogen-phosphorus-potassium) in split applications – 1st application was four days before planting and 2nd application was 28 days after transplanting (DAT).  Slips were planted using a four-row mechanical transplanter within a 16-row bed.  The row centers were spaced at 40 inches and slips were planted every 12 inches within the rows.  The beds were mechanically worked to reduce weed pressure during the establishment period.

Following vine removal and baling, the roots for Year 1 were harvested with a single-row harvester on November 22, 2019 (144 DAT) and graded to determine marketable yield.  Representative root samples collected during Year 1 were sent to Certified Laboratories in New York and evaluated for standard nutritional data and anthocyanins. The roots for Year 2 never reached a marketable size and thus were chopped into the field without collecting any yield data. Potential explanations are included below.

Number of Farmers that Participated in the Research:

The rainfall and temperature distribution data for both seasons are shown in Figures 1a and 1b.  Total rainfall accumulation over the entire growing season was 26.15 inches for Year 1 and 32.43 inches for Year 2. Sweet potatoes tend to thrive with plenty of rainfall during the establishment phase over the first month.  However, if the soils remain saturated through the second and particularly the third month after planting, then the roots do not successfully enter the bulking phase.  The primary climatic difference between Year 1 and Year 2 was not only the increased amount of rainfall in Year 2, but also the consistent distribution during critical bulking.

During the growing season of Year 1, nematode activity was also monitored through monthly sample collection and laboratory evaluation.  The results of the total nematode counts for each cultivar detected in the soil are shown in Figure 2. Soils planted in the Charleston Scarlett had the least amount of nematode pressure throughout the growing season indicating that there may be some inherent resistance within the genetics of that variety.  However, further investigations would be necessary to prove that hypothesis.

Prior to harvest, Danny Johns provided equipment to assist with the removal of the sweet potato vines during the Year 1 trial.  This piece of equipment contained two large rollers that spun in opposite directions and crimped the vines at the ground surface to disconnect them from the roots (see Figure 3).  A round baler typically used for baling hay was used to roll the sweet potato vines into a large round bale (see Figure 3).  We held a demonstration for four local cattlemen who came to the field and inspected the bale.  The removal of the vines was conducted approximately one week prior to harvest to allow for skin set of the roots.  This activity was also very helpful since the vines did not interfere and become entangled in the harvest equipment.

At harvest, marketable yields were determined for each variety by sending them through the grading line and removing any culls or fingerlings that were too small according to the USDA standard.  Marketable roots were weighed for each variety and yields were calculated on a per acre basis.  From lowest to highest, the yields (lbs/acre) were Scarlett (5217), Covington (5538), Charleston Purple (5918) and New Boniato (9205).

Charleston Purple (aka Violet Queen) was also evaluated for nutritional purposes and a nutritional label was created by Certified Laboratories (see Figure 4).  Anthocyanin concentrations were also determined by the lab to be 2.68 mg/100g for the purple-flesh variety and only 0.03 mg/100g for a common white-flesh variety.  Although these concentrations are not included on a standard nutritional label, they can be used to promote the purple-flesh sweet potato as superior based on the elevated concentrations.   Anthocyanins are the phytochemicals associated with the purple pigment in blueberries and they are reportedly responsible for multifaceted beneficial aspects of human health.

We conducted a total of 4 outreach activities involving a total of 163 participants as detailed in Table 1.  We were unable to attend the Produce Marketing Association (PMA) Fresh Summit in Anaheim, CA during the 2019 season, but planned to postpone our attendance to 2020.  But with travel concerns associated with COVID-19, we did not attend this event. Alternatively, we hosted a Local Field Day at the UF/IFAS Hastings Agriculture Extension Center that represented farmers across the Tri-County Agriculture Area (including Putnam, St. Johns and Flagler Counties).  Sweet potato samples were provided to the attendees and Dr. Wendy Mussoline provided an educational summary regarding the lessons we learned from the Year 1 trial.  We hosted a vine baling demonstration for local cattlemen. We also presented our findings with local community members of the Rotary Club in Crescent City, Florida.  With the help of the Putnam County Farm to School Coordinator, we organized a “Taste the Sweet Tater” publicity event at an elementary school to educate children about the importance of agriculture in our community.  Young Singletons (i.e. Brett and Lane) put together videos of their field work and presented a 15-minute educational piece in the classrooms on growing sweet potatoes.  The classroom education was also paired with taste-testing in the cafeteria of purple sweet potatoes by all the students at each school.

The project served as an excellent demonstration for both farmers and community members that sweet potatoes could be successfully grown as a rotation crop with potatoes in Northeast Florida. Three potato growers have shown an interest in growing sweet potatoes in the off-season and as a part of this project, they can use a certified nutritional label to market their produce.  However, growers have expressed the need for establishing local markets for sweet potato since shipment outside of Florida is complicated due to weevil restriction zones.  Thus, Dr. Mussoline has put together a team of multi-State researchers that will help to expand the sweet potato work in Florida.  She and her team have received $55,000 from the University of Florida “Support for Emerging Enterprise Development Integration Teams” (SEEDIT) Program.  The work has been initiated already as funds were released at the end of 2020.  Support from this grant will be used to further explore the nematode influence on the Charleston Purple and expanded variety trials at three different research locations in Florida.  New varieties developed by CAREnergy (SC), NC State, and LSU will be a part of this work. A major emphasis of this grant will be to develop local markets and explore international export programs with Northern Europe through an FDACS liaison