If these initial observations are valid, treatment with live chlorella vulgaris could make it possible to extend the life of tomato plants so that tomatoes can be harvested, where bacterial spot is endemic. Positive results will increase productivity and the length of the harvest period which will positively impact a farmer's bottom line.

The test garden site has not been planted with tomatoes during the previous 7 years.  It will be divided into 2 sections:  one will be treated with 3 inches of mushroom compost before planting, and with additional compost side dressing 4 weeks later.  The other section will be treated with chlorella vulgaris weekly beginning at the time of planting, 50,000 cells per sq foot produced on farm at Sweetgrass.

Assignment of which section to treat with which amendment will be done by an independent observer.

It measures 32x32 ft (1026 sq feet), divided into four 16x16 ft test plots, which will be randomly assigned to the following treatments:
1.   Algae
2.   Algae + Compost
3.   Compost
4.   No amendment
The 25 plant tomato grid (let's call it the "tomato patch") in each of the 4 plots has 5 rows containing 5 plants.  The rows and plants are separated by 30 inches.   Each tomato patch is situated in a corner of its test plot so there is a 4 ft area between the edge-tomato plants and the edge of the plot.  That means 8 ft of separation between each of the tomato patches.
There will be an untreated board barrier extending 10inches into the ground separating the 4 plots (essentially a 32-ft cross dividing the test garden into four equal-sized plots).
To reiterate the nomenclature:  test garden = 32x32 ft.  Test plot (four of them) = 16x16ft.   Tomato patch (four of them in the corners of the plots) = 12x12 ft.

Tomatoes: we will grow BHN1021.  Plants will be obtained from Banner Greenhouses (if plants are not available they will be grown from seed, started in our hoop house in organic potting soil).   There will be 25 plants in each of the test plots, planted at 24 inch intervals.   Lower leaves will be protected from exposure to the soil with organic matter (straw), and plants will be watered with drip irrigation (using our irrigation well).

In addition to determining whether there is resistance to bacterial spot, we will assess the effect of chlorella on nematodes and on soil health and bacterial activity determined by Haney testing.

The effect of live chlorella vulgaris (algae) on plant growth and yield has been the subject of study since the 1970’s.  Its positive effect is attributed to production of growth enhancing compounds with foliar application, including auxins, gibberellin, and cytokinin.  In addition, with soil application, increases in soil microbial activity have been described, leading to increased organic matter and organic carbon.

In this tomato study, we tested the effects of four soil nutrient approaches:

4) as a control, no soil amendment.

The test garden was located on Johns Island, South Carolina, a barrier island with sandy soil described as Seabrook.  It was last tilled 5 years previously and was covered with native grasses and weeds.

Each of the four treatments thus had 8 sections, and the treatments were randomly assigned by the agriculture statistics group at Clemson University.  Each of the 32 repeats was planted with 7 tomato plants separated by 18 inches.

(determinant).   Cultivar type had no influence on any of the

variables measured and reported, so they are combined in this report.

Compost was provided by Allen Skinner at Jacksonville, FL.  It was

applied before planting by adding an 8 inch strip, 4 inches deep to the

row, and it was lightly tilled in.   Side dressing of compost was applied 4

weeks after planting.   Live chlorella vulgaris (algae) was provided by

with a tank sprayer.  Half the application was directed to foliage, and half to soil within the drip line of the

plant.  Algae were applied immediately after planting, then at 2-week intervals.

There were no other chemical or organic inputs; e.g. no pesticides or herbicides were used.  Cardboard

mulch weighted with wood chips was used between rows for weed control, and hoe and hand weeding

Spray irrigation was used as needed.

There was a high plant attrition rate.  Each of the 4 treatment groups had 56 plants at the beginning of the study,

been our past experience).  The months of May and June were unusually dry, so bacterial spot was rare, noted i

n 3 just plants.  The other plants died from Southern Blight, a soil borne fungus (Athelia rolfsii).  Since the

distribution of plant loss was  uniform, we report yield per treatment block as well as yield per living plant.

one week after application, before planting and before application of algae.  Thus, it is a measure

of the contribution of the compost to fertility (Table 2)

Of note, the PLFA measure of biomass was reflected by soil respiration, a measure of bacterial

of compost used in the study.   Based on the Ward Laboratory Haney Test Interpretation Guide

the composted soil would be above average,

and the untreated soil, below average.

This was a qualitative assessment performed on June 5, three months after planting.  Two observers,

The observers were blinded to treatment assignment.

As noted, there was considerable plant loss during the disease, but the magnitude of loss was similar

for the 4 treatment groups, so yield is reported as pounds of tomatoes per block and pounds per plant (Table 4).

The results are affected by two quirks of randomization.  First, two blocks in the compost alone

group were outliers, producing 25 and 28 lbs tomatoes per block.  The next highest producing

blocks yielded 20 and 22 lbs/block, both in the algae + compost group.   The two outlying

blocks were adjacent to each other in one corner of the test garden; they were the only blocks

in the test field that received 100% vigor scores (Table 3). That corner of the field appeared to be

different than the rest.

Secondly, the relatively small increase in yield per block was affected by the higher number of plants

in the control group.  This was apparent when results were reported as pounds per plant.

The initial soil testing indicated that the quality of compost used in the study was exceptional,

so that compost treated sections of the test garden were more fertile.   This is reflected in the

Adding algae did not bring soil fertility to a comparable level.

That said, when algae was added to poorer soil (Control), tomato yield per plant was increased 45%. 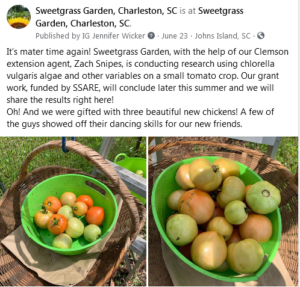 Video_1 Video The results of the research will be published on the SSARE website, distributed on social media platforms, and shared with farmers' groups including but not limited to SAAFON,  BFAA, and the Farmer Veteran Coalition. The results of the research will be shared on multiple platforms and a variety of accessibility options to remove any barriers to access to the results. Sweetgrass Garden will create videos and photo graphic evidence as the project develops to document the progress and results from start to finish. The documentary will be shared as above and, if possible based on Covid-19 restrictions, at an on farm gathering of farmers and community members.

The outcomes of this project show that the effects of Chlorella vulgaris ( liquid green algae concentrate) as a soil-amending bio-stimulant and foliar spray have positive implications for long-term soil health, healthy plants and yield, nutrient input cost reductions, and watershed safety.

We are continuing to study how various algae concentrations and application techniques work on different types of plants and growing situations. This is just one study, and it looks at the short-term effects of algae in combination with a high-quality, organic compost. We will continue additional studies to track long-term effects of C. vulgaris concentrate. We recommend that growers conduct trials on soil, crops, and pasture and then share findings to their growing communities, or perhaps engage state agricultural extensions to become involved in algae concentrate trials. Sweetgrass Garden welcomes questions about this project, and is happy to provide feedback assistance to others who wish to trial C. vulgaris concentrate. Contact us at: jennifer.sweetgrass@gmail.com.

In closing, be aware that delays in the global supply chain along with material shortages have NPK input costs going steadily upward. The growing methods of the past 70 years are becoming increasingly untenable for today’s market. However, bio-stimulant alternatives such as algae concentrate are a viable solution. It is our hope to see current interest in regenerative/sustainable agriculture practices continue to expand so that both economic interests of the farmers and the ecological security of our land and water are addressed. Our goal is to provide growers with an economical, ecologically-sound alternative to synthetic fertility inputs. Algae concentrate can allow farmers to reduce synthetic NPK fertilizer usage by either supplementing a substantial percentage of nutrient inputs with algae concentrate or, when the soil is robust enough, replace synthetic NPK, altogether, with a paring of algae concentrate and organic carbon concentrate.