We have tested a sustainable method for preventing deer and elk damage to a new plantation of western redcedar (WRC; Thuja plicata). This method is based on the idea of planting a WRC seedling together – in the same hole – with a seedling of Sitka spruce (Picea sitchensis). The sharp needles of Sitka are supposed to act as a deterrent for browsers.

We have established a 7 ac research plantation and planted 5,100 WRC seedlings in three groups: 1) WRC seedling alone (1,800); 2) WRC seedling co-planted (in the same hole) with Sitka spruce (1,800); and 3) WRC seedling protected with a Vexar tube, which is the most common current protection method (1,500). We have found that co-planting WRC with Sitka spruce, as compared with planting WRC alone, decreases the percentage of WRC trees with severe browsing damage and increases the percentage of undamaged trees, and that these effects are the strongest when the browsing pressure is severe.

Among our educational activities, we hosted a tour of our research plantation for Washington tree farmers, combined with a workshop on protecting young trees from animals; organized by the Grays Harbor Chapter of the Washington Farm Forestry Association (WFFA), with participation of the Grays Harbor Conservation District and Washington Forest Protection Association (WFPA). The event took place on July 21, 2016, and was attended by 21 tree farmers, 5 agency representatives, 1 educator, and 2 retired executives of a major timber company.

We published an open-access editorial about the project in a peer-reviewed, PubMed-listed journal (Temperature). We also published an article about this project in the Northwest Woodlands magazine, a publication of the Oregon, Washington, Idaho, and Montana tree growers associations. Two flyers related to this project were e-mailed to the WFFA members. Two more flyers were sent to the Grays Harbor College. A publication on the main results of the project is in preparation.

We expect the method of browsing protection by co-planting WRC with Sitka spruce, tested in this project, to become a mainstream method used by small tree farmers in the Pacific Northwest (PNW).

The project was performed as proposed, with the following exceptions. 1) The mortality data in our plantation reflect the 2015 drought and have made it impossible to evaluate the mortality due to browsing. 2) Instead of collecting data on the damage extent after year 2, we collected these data after year 1. Due to the strong growth of weeds and brush on our high-class peri-riparian site, collecting data after year 2 would be much more time-consuming and labor-intensive. This adjustment in the project also reflects the difficulty that we experienced with finding volunteers to help us with surveys. 3) The southern plots on our plantation experienced very heavy browsing. To avoid losing this portion of the plantation, we tubed most of the trees in it after year 1, thus converting this portion of the plantation in a case study.

Objective 1.  We will inform forestry extension programs in the PNW and Washington tree farmers (WFFA members) about our project. We will seek feedback and be open to ideas about fine-tuning the design of our study. 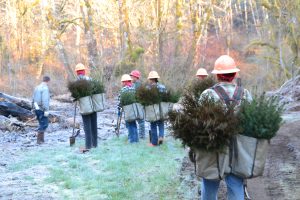 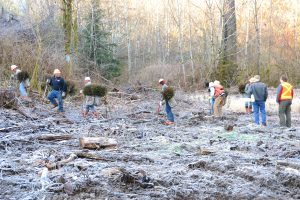 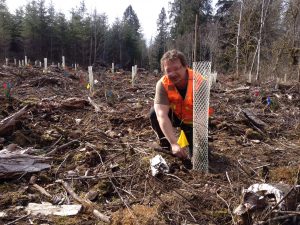 Objective 3. 2014-16. To minimize nonspecific mortality, we will include an extra round (beyond regular practices) of site preparation (fall 2014) and an extra round of weed and brush control (winter 2015-16).

Actions: Additional site preparation was performed by Chehalis Valley Timber in July of 2014 (mechanical) and by Four Seasons Forestry in October of 2014 (chemical). Extra round of weed control was performed by Four Seasons Forestry in July of 2016 (mechanical). In addition to that, several other measures were taken (killing bigleaf maple sprouts, burning piles).

Figure 4 shows high quality of site preparation at the time of planting. 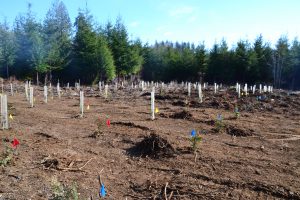 Objective 4. Winter 2015-16. We will determine whether the new protection method increases the proportions of one-year survivors and of one-year non-damaged survivors among WRC seedlings, as compared to the traditional method and to no protection.

Instead of collecting data on the damage extent in different modes of protection after year 2 (objective 8), we collected data to the damage extent after year 1. We realized that it would be much more difficult to collect these data after year 2 due to the weed growth. It appeared that co-planting WRC with Sitka spruce decreases the extent of browsing damage, as compared to planting WRC by itself (with no protection). 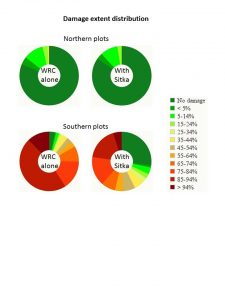 Figure 5 shows the effect of co-planting WRC with Sitka spruce on the browsing damage extent in the northern plots (where browsing pressure was low) and in the southern plots (where browsing pressure was high). You can see that in the northern plots, the co-planting had a very small protective effect, which revealed itself in an even higher percentage of trees with no damage (dark green color). In the southern plots, the protective effect was much stronger and revealed itself in both a large increase of the share of trees without browsing damage (dark green color) and in a large decrease in the percentage of trees with heavy damage (dark orange and red colors). Examples of different extent of browsing damage in different protection modes are shown in figures 6 and 7. 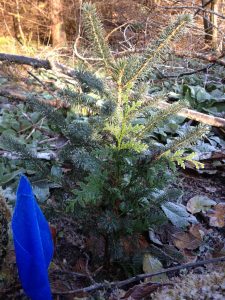 Figure 6. An example of an un-damaged WRC tree protected by Sitka spruce. November 27, 2015. 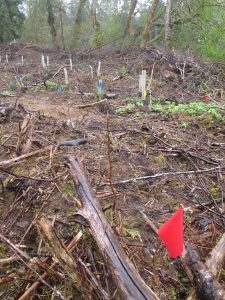 Figure 7. An example of an unprotected WRC tree totally stripped of branches and leaves by deer. April 22, 2015.

Objective 5. Spring 2016. After we process the data, we will prepare a brief report on the one-year results and send it to extension programs and WFFA members.

Actions: The results were presented to the attendants of the Grays Harbor WFFA Chapter Tour on July 21, 2016; see Objective 7 below.

Objective 6. 2016-17. If the results are promising, we will apply for funding to extend this study beyond the original time frame.

Actions: Based on the feedback we received on our other proposal (Do not kill the bear—direct it to less valuable trees; FW15-019, not funded), we understand that WSARE is no longer interested in research proposals dealing with tree farming. Accordingly, we have decided not to seek funding from WSARE for extension of the current project beyond its original time frame.

Objective 7. Summer 2016. We will invite WFFA members for a Field Day, during which we will showcase our project. Dr. Ziegltrum will lead an educational workshop on preventing animal damage to trees and answer producers’ questions.

Actions: The tour of the plantation and a workshop (Dr. Georg Ziegltrum, WFPA) took place on July 21, 2016; see the uploaded Flyer 4. The event was attended by 26 people, including 19 tree farmers, 5 agency representatives (Grays Harbor Conservation District, NRCS, and WFPA), and one educator. Most of the attending farmers were WFFA members. Not included in the number of tree farmers, were two retired executives of Weyerhaeuser, the largest tree grower in the PNW. Figures 8-10 depict the tour and the workshop. 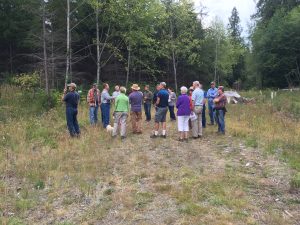 Figure 8. Dr. Romanovsky if talking to the attendees about the research project. 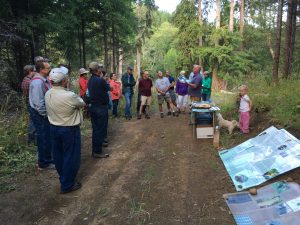 Figure 9. Dr. Zeigltrum giving a talk and hosting the Q & A session on animal damage to young plantations. 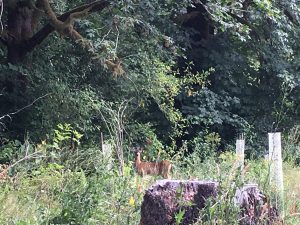 Objective 8. Winter 2016-17. We will determine whether the new protection method increases the proportions of two-year survivors and of two-year non-damaged survivors among WRC seedlings. We will also collect data on the extent of browsing-associated damage and on tree growth.

Actions. Instead of measuring the extent of damage after year 2, we measured it after year 1 (see objective 4).

Objective 9. Spring 2017. We will prepare a brief report about our study and send it to extension programs and WFFA members. We will also make a decision on how to publish our results. Either an abstract and presentation at a forestry-related conference or a research article for publication in an open-access journal will be prepared.

Actions. The main scientific results of this project is the effect of WRC co-planting with Sitka spruce on browsing damage after 1 year; see the report section on Outcomes and Impacts below. A publication is in preparation.

Research: A controlled research plantation was established, and data were collected, as proposed. After year 1, a portion of the planation was turned into a case study.

Education: A tour of the research plantation for Washington tree growers (July 21, 2016) was the main educational event.

For the first time, the effectiveness of the method of co-planting WRC with Sitka spruce in protecting WRC seedlings from browsing has been demonstrated in a controlled study. Since this method is substantially less expensive than the traditional method (Vexar tubes) and provides large savings in labor costs, we expect both growers and agencies will adopt this method.

We expect that the NRCS will make this method eligible for the use in all programs that involve WRC planting in the PNW.

We also expect that this study will promote the wider adoption of WRC as a timber species in the PNW, especially by small farmers. This has a potential of contributing to making the mixture of trees in the PNW more diverse, which is beneficial to the environment. Increasing the proportion of WRC in the tree mixture may also be important for native tribes, to whom this species (WRC) may have a special meaning (material for totem poles and many traditional crafts and arts).

We expect both growers and agencies to adopt the method studied in this proposal (co-planting WRC with Sitka spruce for protection from deer browsing).

We expect that the NRCS will make this method eligible for the use in all programs that involve WRC planting in the PNW.

We also expect that this study will promote the wider adoption of the WRC as a timber species in the PNW, especially by small farmers.