This project proposed to support the use of high tunnel greenhouses in Modoc County, California and surrounding areas. The main objectives of the project were to create a clearinghouse for regionally specific information about successful high tunnel ownership and use; to facilitate peer to peer technical assistance on topics ranging from selection and installation to pest management and marketing; and to measure the impact of a producer-driven users group on the success of high tunnel users.
The population in our area is geographically dispersed, so most producers using high tunnels are isolated from or unaware of other high tunnel users. This is the opportunity on which our project is based. The in-person meetings were popular and very successful, though electronic media (Facebook, web page, email newsletter) had little to no discernible impact, and throughout the project, few people volunteered in any capacity to help organize or oversee the group’s activities. Our conclusions are (1) that the use of high tunnels is growing; (2) both professional producers and interested gardeners enthusiastically attend tours, meetings, and workshops to learn about high tunnel techniques; and (3) the support of an organization with funding will allow the group to continue its activities, as volunteers have not stepped up.

The producers served by this project live and work in the Great Basin on what is sometimes referred to as the Sagebrush Steppe. Farms and towns are generally situated on land that is between 3,800 and 4,800 feet above sea level. The region gets about 15 inches of rain a year. Sagebrush and other scrub dot the landscape, and those who venture just a few miles from home may be rewarded with sightings of antelope, sage grouse, bighorn sheep, or wild horses. The area is dry and windy all year round with winters that can bring temperatures well below zero degrees Fahrenheit. The summer sun, while intense, does not usually bring temperatures above 100 degrees Fahrenheit, thanks to the northern latitude and the relatively high elevation. It can snow or freeze at any time of the year. The climate is well suited to forage production and grazing when water can be found. At the time this proposal was written, the area, like the rest of the western United States, was experiencing a prolonged and severe drought.

This environment is a perfect place to use high tunnel greenhouses to extend the growing season and to protect plants from strong desiccating winds, pests, and extreme temperatures. The residents of this region are independent, conservative, and rely on relationships and evidence for their decision-making. The Modoc High Tunnel Users Group was designed with these people in mind. 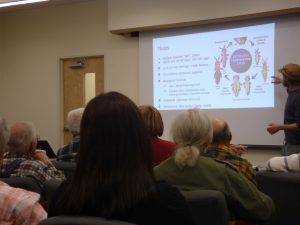 In our region, face to face communication is still considered the preferred means of getting information, and many producers are reluctant to change their methods much without seeing some hard evidence of potential benefit first hand.

We believed that the planned quarterly users group meetings would give producers a chance to visit with each other and see successes or failures, and ask questions about techniques they saw in practice. This would, we thought, provide an effective, cooperative, and culturally appropriate learning environment. Quarterly meetings were scheduled and publicized throughout the life of the project. Spring, fall, and summer meetings were held at high tunnel operations throughout the region, and winter meetings were held indoors at a room secured by our technical advisor. We thought that the fact that meeting content and all other aspects of the group would be producer-driven might motivate potential group members to participate. At each meeting we collected contact information and asked for an evaluation form to be filled out. The rate of return of evaluation forms ranged from 30% to over 80%, depending on the venue, weather, activities, and general flow of the meeting. 1.27.2016-Evaluation 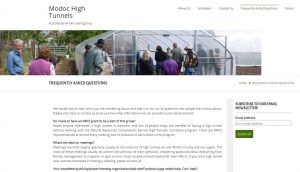 We built an Internet presence that included a web site, mailing list, and social media, which we thought would encourage members of the group to access the right information or make the right connections when they are most needed. The intent was that members of the group would be able to ask for advice, physical help, resources, and references using their preferred mode of communication – paper, electronic, or in person. In reality, most communication happened in person. Facebook participation was weak, with about 15 members joining but only one or two ever contributing posts or comments. The web site, even though it was mentioned at every meeting and in every email, saw very little traffic. We used Mail Chimp to track how many people opened the email newsletters, and this rate hovered around 80%. This led us to conclude that members liked to receive information but were reticent to contribute or interact with electronic forms of communication. Fall-2016-Newsletter 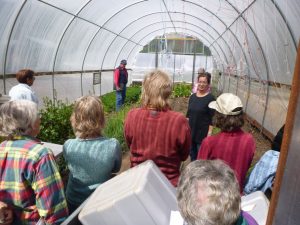 Objective 1 and 2 results: Eight top producers from in and around our region were identified to host tours, presentations, and to act as experts and hosts for the quarterly meetings. Each producer reported improvement and refinement in practices due to high tunnel use, and techniques like hose management and drip tape storage, seed starting using a warming table, use of row covers to extend growing, managing snow, wind, and other environmental factors, and timing plantings to ward off pests. The producers were: 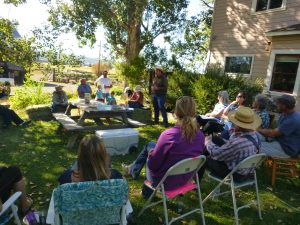 Objective 3 results: since most participation was in-person, networking and new relationships were difficult to quantify. There is anecdotal evidence, such as presenters being contacted after meetings for advice, and some producers mentioning that they met other producers at one of the user group meetings, but we were not able to gather a conclusive set of data that we could use to feel confident that the Users Group was directly responsible for partnerships or networking within the producer community.

Objective 4 was likewise difficult to measure, as many producers were not comfortable discussing changes to their operation’s productivity, but participation in the meetings remained high, and the local food hub (Surprise Valley Grown) did report that products offered by suppliers with high tunnels increased in quantity and in season length over the past two years. 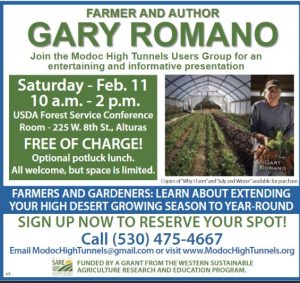 Each meeting was well publicized in local newspapers and magazines, and a system for posting on many small-town post office bulletin boards was developed. The High Tunnel Users Group was featured in community calendars and described in public venues such as the Farm and Ranch Expo at the district fairgrounds, where high tunnels were the subject of popular presentations. We did not write any articles or papers, and were not featured in any agricultural publications. In the future we hope that these may be possible, along with presentations at venues like the state Small Farms Conference for Nevada, Oregon, or California. 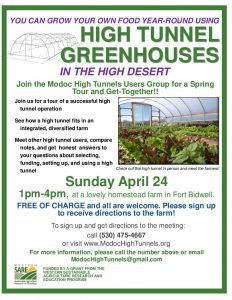 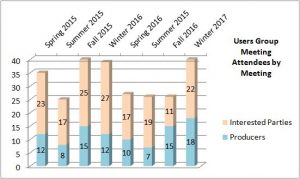 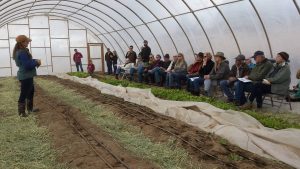 Despite lack of participation in some areas (volunteerism, providing feedback and data, internet communications), the in-person meetings were well-attended and quite popular, with attendance ranging from 25 to 40, not including presenters, organizers, and NRCS staff. In all cases, those identifying as “producers” were outnumbered by “home gardeners” or “interested parties”. This seems to speak to the group’s presenting interesting and compelling subject matters in venues where people would attend. Predictably, attendance was greater in the winter when there were not competing activities such as farming, ranching, sports, or recreation.

We know that the producers in our area are using high tunnels at an increasing rate, and that, possibly coincidentally to the creation of the Users Group, more and more people in our region are employing high tunnels to producer food for themselves or their communities. Continued meetings of the Modoc High Tunnel Users Group would serve to support these small-scale producers, and could open the door to a body of regionally-specific information on, for example, integrating animals like chickens, vermiculture, or aquaponics into high tunnel operations. We had plans to host a “high tunnel raising” where people could get hands-on experience with building a tunnel, but the vendor delayed the delivery of the tunnel kit so that the tunnel is, at the end of this project period, just getting delivered. For now, we know that the meetings, though they are a lot of work to organize, are popular and useful. 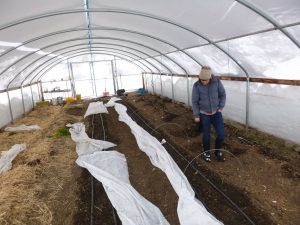 The most difficult aspects of this project were volunteer participation and the ability to gather longitudinal production data. A local food-oriented nonprofit, Modoc Harvest, is in conversation with the User group’s coordinator to take over funding and support for its activities. Oversight and “ownership” is going to be very important going forward, as producers and others report many benefits from attending the user group meetings, and many of Modoc Harvest’s projects are aligned with the needs of food producers. Partnering in the future with a larger organization like Modoc Harvest that recruits volunteers and has a strong public presence should eventually allow for a core of volunteers to form to drive the High Tunnel Users Group in the future. 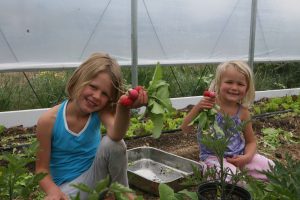 A more understandable aspect of the project is the lack of participation in electronic media by group members. Even though social media and other electronic forms of communication could potentially bridge the miles between producers in our remote area, there are already many things competing for “screen time” such as other applications and the need to spend time with hands busy planting, tilling, harvesting, and performing the millions of tasks required of farmers (and often, parents and grandparents). Future projects of this kind would benefit from the specific identification of producers who would agree to provide production data as designed in the proposal, and these producers should be compensated financially for the time taken to provide quality data.