Our objective of this three year project was to test numerous soil mixtures for growing lavender and to test intercropping the alley between the lavender rows for soil management. We have selected the Buffalo grass as the best performing cover crop for the lavender alleyway. We have completed and begun distributing a new lavender grower’s guide that is focused on the Southwest. 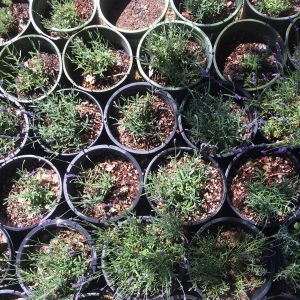 We accomplished the cover crop research by attempting to plant three 100 feet rows of each of the cover crops so they can be compared side-by-side for their weed suppression, water requirements, and companionship ability with the lavender.

We measured the growth, bud yield, and overall plant health of the 2 inch lavender starts that were transplanted into 5 gallon pots containing three different mixtures. The results of these mixtures are listed below.

In addition to these customized soil mixes we tested a commercial potting mix containing an approximated 30% compost, 30% perlite and pumice, 30% peat moss, and 10% screened composted mulch. It was only tested over one season but the growth was comparable to Soil #1 with the added benefit of requiring less water due to the water retention created by the peat moss. It was also significantly lighter than the customized soil mixes but at a much higher cost per cubic yard.

One of the additional benefits of these customized soil mixes is #1 and #2 had really good drainage and we did not encounter any problems with root rot like we have experienced before with various commercial potting mixes.

The Buffalo grass has outperformed the other cover crops we attempted. The trial rows were supplied with supplemental water from micro sprinklers while the grass was initially getting established, but have since been growing without any additional water. The grass provides an ideal solution to foot traffic and year-round soil retention.

The Purple Poppy Mallow was determined not to be a good companion plant because it grew out on a vine without good ground coverage. The vines could climb over the lavender plants, shading them. The Purple Poppy Mallow did prove to grow well in the climate with it’s large taproot allowing it to survive each winter. It did well with surviving foot traffic. It did not provide a good ground coverage during the winter since it died back to the root.

The Prairie Zinnias continued to prove difficult to germinate. It does not appear to be an ideal solution for planting in the alleyway because of rarity of seed and difficulties to germinate. Prairie Zinnias do provide better ground coverage year-round than the Purple Poppy Mallow but would not be as durable to foot traffic as the Buffalo grass. 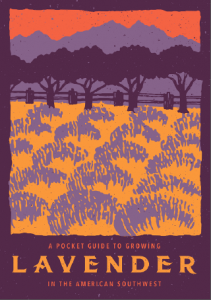 We had several visitors to the farm to see our progress. We have completed the Pocket Guide to Growing Lavender in the American Southwest and have begun distributing the lavender guide. We believe this guide will be our greatest outreach opportunity. We will continue to provide outreach about our research beyond the life of the grant through presentations and future field days.

14 Farmers reported changes in knowledge, attitudes, skills and/or awareness as a result of their participation
Key changes:

We are encouraging by the results of the soil mixture and plan to continue using this type of soil mix. Our hope is that the research into custom soil mixes will help reduce root rot for other lavender farmers.

We also are also encouraged by the performance of the Buffalo grass within the lavender field and plan to plant the remainder of the lavender field with it. It has greatly reduced weed pressure while providing erosion control. The low height of the buffalo grass is ideal because it doesn’t appear to compete with the lavender, and its low water demands mean that once it’s established, we can continue watering the lavender using only drip, keeping our overall water usage low and reducing the threat of root rot.

We had several visitors to the farm to see our progress. Several other lavender farmers visited to see particularly how the buffalo grass was working with the lavender. It was discussed as a solution to the problems experienced with other alleyway covers such as weed cloth and wood mulch. Our visiting farmers described issues with weed cloth creating excess heat and wood mulch spreading mold. They also agreed that periodically replacing the weed cloth (and sending the used portion to the landfill) is both expensive and wasteful.