This project has three primary objectives: to test woody nut shells as substrates for a variety of gourmet mushrooms, to produce high quality fresh gourmet mushrooms for the local market, and to use the spent substrates as mulches for soil enrichment and water conservation.
The United States is the largest producer of almond and pistachio nuts in the world with California as the major growing region. Million tons of nut shells are generated as byproducts per year. The woody shells used to be burned for power generation but it can cause air pollution and currently there is no good use for them. It is necessary to find new sustainable ways to recycle these byproducts.
Mushrooms such as shiitake, lion’s mane and oyster mushrooms are fungi decomposer of wood wastes.
They have high nutritional and medicinal values. Hardwood sawdust is the standard substrate for growing these mushrooms but farmers in southern California need to get it from as far as Oregon. The cost is too high to be sustainable. Using the woody nut shells to grow mushrooms will give mushroom farmers plenty of low cost substrates and also help nut farmers get rid of biowastes. The nut shells after mushroom growing will be used as mulch for local farmers to conserve water.
Our farm have produced certified organic oyster mushrooms from local wheat straws and planned to grow Shiitake, Lion’s Mane and other gourmet mushroom varieties to enrich the local food market. We will research conditions for optimal growth of various strains of mushrooms using nut shells as substrates and develop a protocol for mass production of these gourmet mushrooms. We will educate farmers and the public about the available new substrate, mushrooms and mulches through our outreach programs. It will be a win-win for farmers, consumers and the environment.

1. to test woody nut shells as substrates for a variety of gourmet mushrooms
We will work out the conditions and protocols to use nuts shells for mushroom farming. We will
determine the economic viability of these substrates based on the yield of mushrooms,
cultivation time, contamination rate and other special requirement.
2. to produce high quality fresh gourmet mushrooms for the local market
We will evaluate the quality of mushrooms grown from nut shells and test their marketability.
3. to use the spent substrates as mulches for soil enrichment and water conservation
We will work with avocado farmers, vegetable farmers, and college student interns to evaluate
the effectiveness of mulches from spent mushroom substrates.

We obtained the following nut byproduct materials for our research:

We obtained the following nut byproduct materials for our research:

Mushroom growth requires a balanced ratio of carbon and nitrogen in the substrate. The woody nut shells are evaluated as a substitute for hardwood sawdust, which is hard to find and expensive in California, and the nut hulls as a substitute for wheat bran ($20/50 pounds) as nitrogen sources.

We broke the nut byproducts into small pieces in a blender, mixed with other materials if needed and added water to a point just before the mix got saturated. The substrate mix was put into a polypropylene bag (7x14 inches) and the opening of the bag was put through a neck and sealed by a cap with a filter. The bags were autoclaved in a pressure cooker for 30 minutes. After cooled down to room temperature, the bags were inoculated with mushroom grain spawns (oyster, lion’s mane and shiitake mushrooms) in a sterile culture hood. We then incubated bags in a dark room for up to 1-2 months. The mycelia started to grow from the top area where spawns were inoculated. The rate of the mycelium growth in different substrates were measured by progress of the white front over time. Two weeks after the bags were completely occupied by mycelia and turned white, they were transferred to a fruiting room with high humidity (80 to 90%), 12-hour light/dark cycle, frequent ventilation. The caps of the bags were removed for mushroom fruiting bodies to form at the opening. Fruiting could take up to 2 weeks. After the mushrooms were collected, the bags were recapped and returned to dark incubation area and after 10-14 days, they were brought back to the fruiting room for 2nd round of fruiting. Mushrooms were weighed and the biological efficiency was calculated by dividing with dry substrate weight in the bag.

After the bags were done with producing mushrooms, the spent substrate (nut shells) was given to farms for use as mulch for fruit trees or other crops. The effectiveness of water preservation and weed deterrence was compared with convention wood mulch. 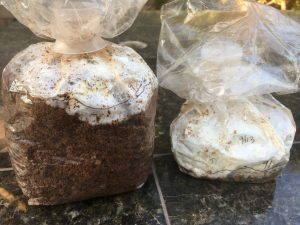 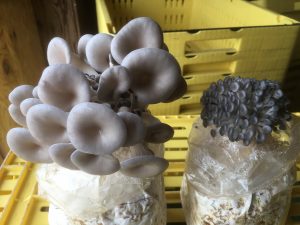 For 500g of shells, 420 ml of water were added to almost saturation. Little or no mycelia growth occurred 4 weeks after inoculation. It is no surprise because almond shell does not have enough nitrogen source.

For 500g of mixed substrate, 415 ml of water were added to almost saturation. Final water content is 45 to 50%, compared to 60% when sawdust is used. Mycelium growth is slow at a rate of 3mm/10days initially and later stalled. When the almond shells are broken into small pieces (<3mm), the packed bag is quite compact, which may slow down mycelium growth. So we used coarse substrate but the growth is not much improved.

Final water content is low at 50% compared to sawdust substrate. The mycelium growth was at 9 mm/10 days, when coarse materials were used. If the shells were broken down too fine, the bag was too packed for mycelia to invade.

Conclusions from above: Almond hull it not good supplement material. As it is used as feed for cattle, the price is also high. It is better to use the regular wheat bran. Almond shell is easy to be broken down to tiny pieces, which makes bag to tightly packed and unfavorable for mycelium growth.

For 500g of pistachio shells, only 245g water can be added before reaching saturation, achieving final water content of 33%. The shells are hard and very difficult to break into small pieces.

Surprisingly, mycelia grow OK in unsupplemented shell at a rate of 8 mm/10 days. We noted that though the shell has low nitrogen content, there are some pistachio kernels mixed in the shells (1-3%) which may provide the needed nitrogen.

For 500g of mixture, 305g of water can be added to a final water content of about 40% considering 10% moisture in the shells and hulls. The mycelium growth rate is 9 mm/10 days.

Conclusion: Pistachio shells with some leftover kernels can support mycelium growth without more supplement. Pistachios hull is not as good supplement as wheat bran.

the biological efficiency from two harvests is 15%, slightly less than 19% of a similar control bags using sawdust supplemented with wheat bran. We noted the BE yield is lower in these small bags than that using large bags. But the small bags are designed for an automatic bagging system. So we stick with it.

When we inoculate another mushroom lion’s mane in pistachio shell substrates either alone or with supplements, we observed quick mycelia growth 12-18 mm/10 days and obtained beautiful fruiting bodies. BE is 9 to 15%, comparable to that of supplemented sawdust substrate. Fruiting even started before the mycelia occupied the whole bags. Therefore, we found pistachio shell is a good substrate for growing Lion’s mane mushroom. On the other hand, lion's mane mycelia grew slow in almond shell substrate supplemented with 15% wheat bran (8mm/10days) and did not consistently yield fruit bodies (BE <5%)

Mycelia growth was slow (<5mm/10day) in both pistachio shell substrates and almond shell substrates supplemented with up to 15% wheat bran. It took too long to fully colonized the bag and thereby increases the chance of contamination. So we consider adding some supplement to the bags.

To further improve the water content of the nut shell substrates, we tried to add water absorbing materials. We tried by adding peat moss, hard wood sawdust, West coast fir sawdust. Adding 20% of more these materials to the total weight increased water content to 55%. However only west coast fir sawdust is an economical option. We purchases wood pellets from hardware store in 40-lb bags with brand name such as Golden Fire for $5 per bag. They are made of 100% Douglas fir. Even though Douglas fir is considered a soft wood, we have successfully use it to grow mushrooms even through the yield may be lower than hardwood. We can buy and store large quantity of the wood pellet in the winter for year round use. 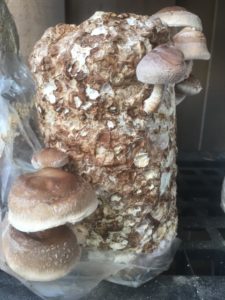 We attended the San Diego Farm and Nursery Expo to network with other farmers and agricultural professionals. We distributed flyers about our farm and project at the show. We linked with two company/organizations which distribute mulch and soil enrichment product in San Diego county and discussed about distributing our spent mushroom substrate as mulch products in the future. We also met many local and organic food advocate groups and educated them about the health benefic of mushrooms.

We hosted five interns and taught them about growing mushroom with nut byproducts.

We worked with Steve Elliott from Western Integrated Pest Management Center to write an article about our project.

We gave a lecture to students of the Farm America Program at Grossmont Union High School District and organize service learning activities at Cal State University at San Marcos.

Our project may offer new use of millions of tons of nut byproducts generated in Central Valley of California. Some hullers in that area are willing to give away the nut shells or hulls free or at low cost. If new mushroom farms were set up in the nut producing area, it will further save on the transportation cost and minimize the impact on environment.  Gourmet mushrooms such as oyster and shiitake mushrooms are mostly imported from Asian and lion's mane mushrooms are hard to find. They offer many nutritional and medicinal benefit for consumers, for example, they are rich in proteins and good substitute for meat products for vegetarians and vegans. The spent substrates after mushrooms are harvested can be used a mulch by farms to conserve water and prevent weed growth.