Pest control in vegetable crop is a challenge in tropical climate such as Hawaii. Plastic mulches are often used but it is bad for the environment and difficult to remove. Living mulches provide a reasonable alternative. Mint, a living mulch interplanting with a vegetable crop, provides a high

return. In addition, mint reduces soil erosion, retains moisture, and if left to flower acts as an insectary. This farmer research grant is geared to assist farmers in understanding the benefits of a mint living mulch and making decisions on water and fertilizer inputs needed for the successful adoption of mint living mulch in their vegetable production. Eggplant (Solanum melongena) serves as the vegetable crop. Demonstration plots compared and contrasted eggplant grown with and without a living mint mulch. Three irrigation levels were also demonstrated. In general, eggplant yield was reduced when grown with mint. A black plastic mulch resulted in greater eggplant yield measured in pounds of fruit. Irrigation level had little effect because rainfall was sufficient, consequently, the high level of irrigation (1-acre-inch per week) was unneeded for the eggplant. The mint grew much better with the higher irrigation level. Soil quality, as measured by nematode community analysis, was good in the plots regardless of the ground cover. Plant-parasitic nematode populations were low. The profitability of mint living mulch has not yet been accounted for using partial budgeting because food safety protocol costs were not included in the original budget. The sustainability of the mint living mulch vegetable cropping systems was promoted through workshops and site visits by county agents. During farm workshops, both virtual and in-person, attendees learned about mint living mulch benefits. Evaluation and feedback from the attendees demonstrated interest in mint and conceptualization that mint may be better viewed as the cash crop with eggplant providing supplemental income to the mint crop.

This farmer research grant is geared to assist farmers in understanding the benefits of a mint living mulch and making decisions on water and fertilizer inputs needed for successful adoption of mint living mulch in their vegetable production. The specific objectives of this proposal are

(3) demonstrate and promote the merits of the mint living mulch vegetable cropping system.

Objectives 1 and 2 were achieved as they have been demonstrated at the small experimental plots at the University of Hawaii experiment station. The project was scaled to a 2/3 acre with irrigation, a manageable size for a small farm vegetable intensification production approach. On-farm field demonstration days and workshops ensured interested farmers attend and were able to observe the eggplant-mint cropping system.

The mint was established and plastic mulch laid over plots. A split-plot design was employed to establish irrigation regimes with the mulch treatments randomized within the irrigation regimes. Weeds were removed by hand as needed. An organic turkey manure was applied irregularly. Irrigation regimes consisted of a 1-hour, 30-minute, or 15-minute run each day. Initially, Burpee ‘Meatball’ eggplant seedlings were planted. This particular cultivar was selected as an approach to whole-farm value-added products such as baba ganoush, however, this cultivar did not grow well and suffered substantial injury from mites. These plants were removed and replaced with the locally adapted cultivar ‘Poamoho Purple.’

Harvests in both eggplant cultivars were made in the late fall in 2018 and in late fall 2019 through early spring 2020 (Figs. 1 and 2). The eggplants growing in the plastic mulch have provided the most fruit by number (66 vs 13) in the first planting. The second planting showed similar behavior – eggplant yield was greater from plants in the plastic mulch treatment (492 vs 209 fruit). The total yield was substantially lower in the mint compared to the black plastic mulch (159 vs 450 oz). Individual fruit were larger from plants grown in mulch compared to the living mulch (2.7 vs 1.8 oz/fruit). The quality of the fruit was similar among the treatments (Fig. 3). 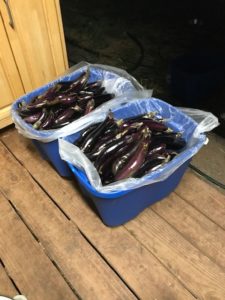 Eggplant does best at very warm temperatures. In the winter months, eggplant is typically slow-growing and yields less. The black plastic mulch clearly benefited early eggplant growth and resulted in more yield. The mulch may have increased the soil temperature which was more amenable to the eggplant resulting in greater growth and yield. Irrigation did not have as great of an effect and may have cooled the soil making, depressing eggplant growth and yield. The 2019 growing season was wetter with more natural precipitation than 2018. Rainfall provided most of the water needs to the eggplant.

The original objective was to harvest and process the mint for oil but the plots were too small to provide sufficient biomass for oil extraction. Marketing mint as a fresh herb requires adherence to food safety parameter. Not all standards were met, therefore fresh mint was not marketed from the test.

The ecosystem benefits of the living mulch were not readily apparent to over the short duration of the mint living mulch observation period. Like many less conventional approaches, multiple years and cropping cycles are needed to affect substantial change to the soil ecosystem.

The education and outreach activities consisted of individual farm tours/consultations, an in-person workshop, and virtual presentations. Local farmers in the area were invited to visit the farm and demonstration plots. During the farm visits, the growers were shown the plots and engaged in a discussion of the benefits and challenges of the living mulch. Fellow farmers showed interest and enjoyed the smell of the mint in the field.

Adverse weather and government pandemic orders limited traditional field days. ing required some adjustment. One workshop was held at the University of Hawaii at Manoa campus with a farm tour immediately thereafter (Fig. 4). A mix of 15 farmers and researchers attended the morning workshop. Two virtual workshops were held via Zoom where information was presented on the outcomes and benefits of the living mulch. Questions from the participants were fielded by K. Chan.

11 Farmers reported changes in knowledge, attitudes, skills and/or awareness as a result of their participation
Key changes: