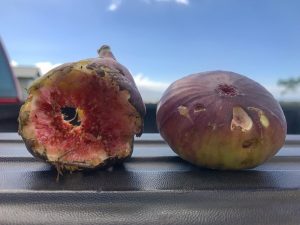 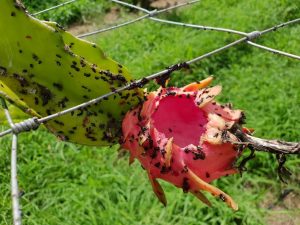 Sustainability and Production of Fruit Crops in Hawaii.

Birds are responsible for damaging many high value fruit crops in Hawaii, making a significant detrimental economic impact for local farmers and creates barriers to entry for new farmers. They spread disease and ruin crops.  These affected crops include dragonfruit, figs, mangos, lychee and longan.  Farmers are presented with various methods of protection and deterrence.  Many of these methods are expensive, labor intensive, impractical and often ineffective.  The subject research looks to examine the cost/effectiveness of two conventional methods of bird pest deterrence, and compare it to one novel method.  The methods are conventional netting (exclusion), conventional reflectors (visual stimuli), and an innovative method of utilizing an automated visible Agrilaser.

Current practices include sound machines, hunting, bitterants, reflectors, bird netting, and bagging fruit before harvest.  These methods are problematic as the birds quickly adapt to these deterrents.  Netting and bagging are labor intensive, additionally the materials used are expensive and often do not survive an entire season.  Many fruit crops do not lend themselves to these practices due to the size of the tree or the fruit.

The project will test this innovative and humane form of pest deterrent in Hawaii and compare it against conventional methods for use on dragonfruit and fig crops.  The project will use a visible laser system to keep birds out of a specified area of crops.  This method differs from others in that the birds view the laser beam as a physical object, and they avoid it without adapting.  This system is mounted on a programmable base, so that the deterrent can be applied to any crop-producing field within a 6,500-foot radius.  The system is programmed once with the specific parameters of the area to be treated.  It can operate 24 hours a day, 7 days a week, within these parameters.

To measure the effectiveness (and success) of utilizing the Agrilaser deterrent method, we will visually compare and record the number of matured and emerging fruit production destruction levels from four controlled tree populations within the project space of 3 acres.

The plant categories are as follows:

Recording physical counts of fig predation will provide sufficient frequency data to measure the effectiveness of the laser.

Trials were designed and set up by the project lead and the technical advisor.  There are four treatment areas: netted, lasered, traditional bird scares (no net, no laser), and a control.

So far the control group, an initial set of the laser group, a complete set of the bird scare group have been measured and some initial data has been collected by a few collaborating farms.

The laser group has been expanded and will provide a more complete data set this production period. Initial observations showed a greater effect on the larger species of birds predating on the fruit crops. Smaller species were also affect but when in large groups showed some resistance. There is more work to be done experimenting with intervals, frequency and patterns.

The netted group experienced some issues due to wind and required more maintenance and reinforcement. It has been updated and should provide a more complete data set this production period. Initial testing provided some limited data. Initial observations confirmed the greater amount of labor maintenance and material needed for this method.

The un-netted traditional bird scare treatment is being conducted at a collaborating farm. Some data has been collected for last season, more will be available in the coming year.

The control group with no protection is also being measured.

Fully tabulated results tables will be available in the next reporting period.

Results have been tabulated for 5 months of production in 2020. Results were recorded as a number of harvested fruit as compared to damaged or missing fruit.

Results show that the audio and laser treatments were able to reduce predation on fruit crops. However, the effect of the treatment was inconsistent and will be adjusted in the future to prevent pests from becoming used to the deterrent. The traditional system utilized a standardized rotation of adjustments to prevent the pests from getting accustomed to the deterrents. This showed to be an effective strategy, as did utilizing a combination of treatments. It has been hypothesized by the grant participants that the diversity of pest bird species complicates the system. When one species is successfully deterred by a treatment another species is still present and less affected, minimizing the effects. The results so far indicate that the bird laser system has an effect, and with rotation that effect will be higher, however there are cheaper options that require more labor and that may be more effective.

The labor for the bird netting and bagging of fruit was by far the most significant, followed by the traditional and combination treatments. The laser and audio had the least involved labor after mounting the equipment. The bird netting experienced increased labor because of severe weather events and coming into contact with the plants, better and more expensive infrastructure could solve this issue. once compromised the netting was severely less effective. So far this project has found the netting to be the most effective measure despite issues.

Multiple consultations and and onsite visits have been executed with participants reporting an increase in knowledge and plans to adapt successful treatments. The planned conference event and other speaking engagements have been delayed as a result of COVID-19. Plans to resume outreach will follow in the coming months. A full cost efficiency for each treatment has been started and will be completed for the final report.

Bird Species predating on fruit crops have been recorded and identified.

Over the proposed 2 year period of study, from inception to conclusion, the project manager will promote awareness of the project activity through regular exchanges with the University of Hawaii, College of Tropical Agriculture and Human Resources (CTAHR Extension Office), the Hawaii Farmers Union United (“HFUU”) and the Hawaiian Tropical Fruit Growers association (“HTFG”).  These are the three main beneficiaries of the results and provide the widest awareness to the general farming communities throughout Hawaii.

From the final data collection, results will be condensed both graphically and in text format into a shareable PowerPoint (PDF) presentation that will be emailed to the wider association of farmers through the current HFUU and HTFG membership and website information. These presentations will be also be disseminated through the University of Hawaii College of Tropical Agriculture and Human Resources, as well as the Hawaii Department of Agriculture.

A link to an on-line narrated video will be embedded in the presentation to access a wide Hawaiian based audience. It will also be posted on YouTube. Using platforms such as Zoom and NearPod, the project will be able to host live demonstrations with interaction from the wider online audience to be able to clearly demonstrate results while answering questions and concerns.

Given the HTFG and HFUU hold monthly meetings on every island and the project manager is heavily involved in the both, verbal progress reports will be made as to the projects development.

Over the proposed 2 1/2 year study period, there are annual general meetings of the HTFG and HFUU, on the Islands of Hawaii, Oahu and Maui.  A more formal update report will be distributed at each agricultural forum (with photos) which are typically attended by over 300 individuals and companies representing both small and large farming concerns across Hawaii.

The project has been articulated and described at the annual HTFG Conference 2019 which occurred in Kona, Hawaii. Questions were taken and interest was gauged for field activities and presentations to each island and chapter. Updates were given at monthly meetings as well as the quarterly meeting of the board.

Field activities have been conducted with chapter representatives and other farmers and collaborators on Maui. So far HTFG has been the main recipient of the educational work. This is planned to expand to HFUU as well as CTAHR as more data and analysis come to fruition.

The first year of complete data, as well as all project related information will be presented at the HTFG Conference 2020 occurring in Kahului, Hawaii later this year.

Video report and publication to come.

130 Farmers reported changes in knowledge, attitudes, skills and/or awareness as a result of their participation
Key changes:

So far 8 farmers have expressed intent to trial different forms of bird protection to test effectiveness for their affected crops.

The project has worked with 5 other farmers so far to put up various forms of bird protection.

These numbers are expected to grow with more research and data available.

As the project proceeds into this years productions, there will be more tangible data to work with and provide to farmers and educators. The reach will expand and the number of participants will increase dramatically. The annual conferences will provide the best opportunities to reach farmers in need.