Small-scale livestock farmers are looking for innovative ways to manage their lands for environmental sustainability and economic profitability, while ensuring animal well-being. Multi-species rotational grazing (MSRG) has been suggested as a promising approach, since it allows high grazing intensity and stocking density without negatively impacting pasture quality or animal health. However, the potential effects of MSRG on soil microbial communities are poorly understood. To address this knowledge gap, we will collect soil microbial samples before, during, and after one season of MSRG by cattle, sheep, and swine. Nine paddocks experiencing MSRG, as well as three paddocks experiencing monospecies grazing (one paddock per species) and one with no grazing, will be sampled. Soil samples will be sent to the University of Oregon Genomics & Cell Characterization Core Facility for shotgun metagenomic analysis to identify taxonomic, phylogenetic, and functional characteristics of the microbial communities from each paddock. We expect that MSRG paddocks will have higher microbial taxonomic, phylogenetic and functional diversity, as well as distinct taxonomic composition, in comparison to monospecies grazing or no livestock. In addition to posting results on the farm website and social media, we will share the outcomes of our study with other farmers and agricultural professionals at the Oregon State University Extension Small Farms Conference in 2021 and host a Farm Field Day in summer of 2021. This project will substantially improve our understanding of soil microbial communities under MSRG and provide information for other farmers following sustainable agriculture practices.

Objective 1: Measure the impact of MSRG on soil microbial diversity, composition, and function.
We will collect soil samples before, during, and after MSRG and use shotgun metagenomics to identify taxonomic, phylogenetic, and functional characteristics of soil microbial communities (bacteria, fungi, and archaea). We hypothesize that each livestock species has a different effect on soil microbial communities (due to distinct foraging/grazing strategies and unique manure composition), and that MSRG will lead to higher microbial taxonomic and functional diversity, as well as different taxonomic composition, in comparison to monospecies grazing or no livestock.

Objective 2: Assess changes in livestock health and pasture forage quality following MSRG.
Since MSRG can effectively break livestock parasite cycles, we hypothesize that animal health will improve following MSRG. Additionally, we hypothesize that pasture productivity and plant diversity will increase after MSRG, due to changes in manure deposition and grazing patterns.

Objective 3: Share study outcomes with other farmers, agricultural professionals, and the general public.
We will disseminate our project methods and results by presenting at the Oregon State University Extension Small Farms Conference in 2021 and hosting a Farm Field Day in summer of 2021.

The major milestones (Figure 3) that are essential to this project are: collecting soil samples and measuring animal/pasture health before (April 14, 2020), during (June 30, 2020), and after (September 16, 2020) MSRG; processing and analyzing microbial samples; presenting the results and methods to other farmers and agricultural professionals at the OSU Small Farms Conference (February 20, 2021); and hosting a Farm Field Day at Black Tansy Farm (May, 2021). 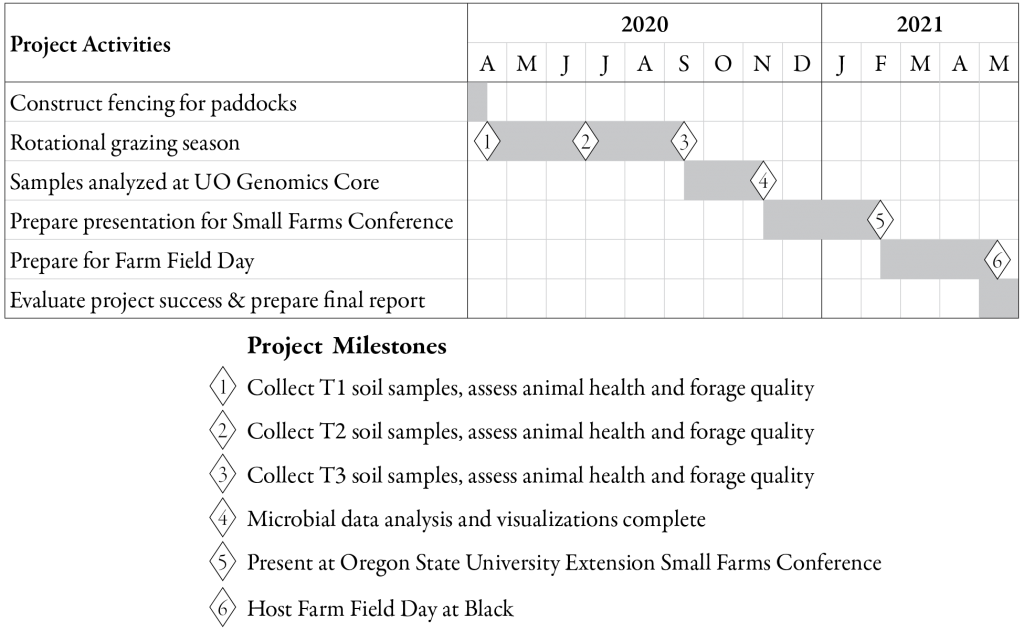 This research was conducted at Black Tansy Farm, a small family-owned and -operated farm located on the outskirts of Springfield, Oregon. The farm was established in 2014 and currently produces meat and fiber from cattle, sheep, and pigs for direct sale to consumers. To achieve the objectives of this project, we constructed approximately 2000 feet of new permanent fencing and installed additional electric fencing to implement our MSRG system. The new fence construction was performed in May, 2020, immediately upon notification of award. As constructed, the ~18 acre pasture was divided into 6 sections, which were further subdivided into 1-acre paddocks with electric fence/netting. We began our rotational grazing regime in mid-June, slightly behind our planned timeline due to difficulties scheduling sample collection, and continued rotations until mid-October. In our MSRG plan, sheep go first through each multi-species paddock, as they have the highest nutritional needs, followed by cattle, and then pigs last to break up the soil and manure clods. Instead of performing management-intensive grazing, we elected to follow a strict rotation period of 4 days. The reasoning behind this decision was to ensure sufficient time (46 days) to break the parasite cycle before a given species returned to their first paddock, and to minimize variability in impacts to the soil microbial communities due to differing lengths of time spent on each paddock. See Figure 1 for MSRG plan details.

Objective 1: Measure the impact of MSRG on soil microbial diversity, composition, and function

For soil microbial analysis we followed Earth Microbiome Project protocols. Soil cores 2.5 cm in diameter by 10 cm deep were collected from five locations in a roughly "W" shape within selected paddocks (Figure 2) using sterilized stainless steel soil probes. The sample collection paddocks were different from those in our original proposal, because comments from the technical review panel indicated that a balanced number of samples (3 each) representing multi- versus single-species would be a stronger study design than our original plan, which would have resulted in only 1 sample each for cow, pig, and sheep paddocks, but 9 for multi-species. Samples were collected prior to beginning MSRG (mid-June), to provide a baseline condition, halfway through the grazing season (mid-August), and at the end of the grazing season (mid-October) to assess changes in soil microbial community structure and function. For each paddock and time point, the five soil cores were combined and homogenized, then aliquoted into two 0.25 gram subsamples; the remainder of the bulk soil was discarded, except for the final October samples, which were delivered to the local Natural Resources Conservation Service (NRCS) office for soil physical and chemical analysis. From the two technical replicates aliquoted from each sample, we extracted metagenomic DNA using the MoBio PowerSoil DNA extraction kit and prepared libraries for shotgun metagenomic analysis using the Illumina Nextera XT DNA library prep kit. Negative and positive controls were included for quality control, and samples were randomized during extraction and DNA preparation to minimize batch effects. A total of 72 soil samples were submitted on December 10, 2020, for sequencing on the Illumina HiSeq4000 platform at University of Oregon's Genomic & Cell Characterization Core Facility. Raw data was received back from the Core on March 8, 2021, but data cleaning and analyses have not been performed yet.

Objective 2: Assess changes in livestock health and pasture forage quality following MSRG
Body condition scores were tracked from beginning to end of the grazing season to assess any impact of MSRG on livestock productivity. We also recorded disease symptoms and mortalities that occurred during the grazing season. To evaluate how MSRG affected forage quality, we  measured forage biomass production by hand clipping samples, and recorded plant species composition in 12" squares at 3 locations (representing low, medium, and high production) for each paddock immediately prior to the final set of rotations. The original proposal also included counting grass tillers in the 12" squares, but this was quickly found to be infeasible. Hand-clipped samples were oven-dried at 140 ºF and weighed; the average of the dry weights were used to estimate forage production for each paddock following the methods in Shewmaker and Bohle (2010).

No data have been received from the sequencing facility at UO, due to delays related to their participation in COVID-19 testing. Our samples are in the queue and expected to be sequenced in early March, which would allow us to meet our deadline of having analysis results by May 1, 2021. We will need to request a no-cost extension for our Farm Field Day this summer, which OSU has agreed to publicize for us, and for our participation in the OSU Small Farms Conference, which was cancelled in February due to COVID.

Objective 3: Share study outcomes with other farmers, agricultural professionals, and the general public
Due to the delay in receiving the DNA sequencing results back, we have not yet been able to prepare materials for our planned Farm Field Day. We intend to host our Farm Field Day later in the summer, rather than in May as originally planned. In addition, the OSU Small Farms Conference, where we intended to share our study results was cancelled this year due to the COVID-19 pandemic. We have continued to maintain contact with the OSU Small Farms Conference leaders and will secure a presentation slot at the next available opportunity, likely in the fall or winter of 2021.

2 Farmers reported changes in knowledge, attitudes, skills and/or awareness as a result of their participation

1 Farmers changed or adopted a practice
1 Farmers intend/plan to change their practice(s)
4 New working collaborations
Return to Project Overview
Any opinions, findings, conclusions, or recommendations expressed in this publication are those of the author(s) and do not necessarily reflect the view of the U.S. Department of Agriculture or SARE.