Warm season annuals such as corn (Zea mays L.) and brown mid rib (BMR) sudangrass [Sorghum bicolor (L.) Moench.], can increase the carrying capacity of grazing farms by producing great amounts of forages during mid-summer, when cool season pasture growth rates decline. These warm season annuals can be interseeded into a perennial forage, such as Kura clover, to reduce soil erosion and provide forage of greater digestibility and protein to grazing cattle. In addition, cereal rye can be added to the system to provide weed control and additional grazing forage in early spring.

The objectives of this study were to quantify annual forage production, forage nutritive quality, and animal gain on sudangrass and corn interseeded into Kura clover. To compare the two systems forage production, forage nutritive quality, animal gain, and number of grazing days were measured. Additionally, an economic analysis will be completed to determine the costs of planting and maintaining both systems, plus a comparison to a typical cool season perennial system.

The experimental designs consist of two treatments, corn with Kura clover, and BMR sudangrass with Kura clover, both preceded by winter rye with Kura clover. Kura clover was seeded in late summer 2013. Weed control in the warm-season component was accomplished by fall-seeding winter rye and early spring grazing of this mixture. Corn and BMR sudangrass was planted each year in early June, with grazing starting 4 to 6 weeks after planting. Each treatment had three replicates, resulting in a total of six 2.82 acre pastures. Each pasture was further divided into 8 paddocks, each of which was be grazed for 3 days. Corn-Kura clover was grazed once over 24 days, while sudangrass-Kura clover was grazed as many times as possible while maintaining a 24 day rotation.

Steers weighing 500 to 550 lbs were be purchased in early April. Grazing commenced as soon as there was enough pasture growth to maintain five “tester” steers per paddock for 3 days. Tester steers from the rye-Kura clover pastures were used as testers on the warm season pastures. Grazing commenced in the warm-season pastures when BMR sudangrass height was over 28 inches, to avoid prussic acid poisoning. Grazing was managed via a “put and take system”, meaning that when forage production exceeded the requirements of the tester steers additional non-tester steers were used to consume excess forage. Carrying capacity was calculated by multiplying the average tester weight by the average number of steers exposed, weighted by steer days, over the time period, and then divided by the total land area in the experimental unit. Steers were weighed every 24 days or before and after each full grazing rotation.

Pre-grazing forage samples were collected once per week for the entire grazing season in the paddock that was next in sequence for grazing, followed by a post-grazing biomass sampling. Sudangrass-Kura clover samples were hand clipped 2 in above ground level from three random areas in the paddock. Quadrats of 3.06 ft2 were used for sudangrass, to accommodate a row spacing of 7 in. Corn-Kura clover sampling involved hand-clipping stalks to 2 in above ground level from 10 ft of row from three random locations in the paddock. The same respective methods for each treatment were used for the post-grazing samples.

Data was analyzed by ANOVA as a completely randomized design using the MIXED procedure in SAS with pasture as the experimental unit. Repeated measures analysis was included for forage biomass and quality variables. Average daily gain was analyzed similarly as a completely randomized design with group of tester steers as the experimental unit.

Corn-Kura clover and sudangrass-Kura clover did not differ in their average pre-grazing biomass (Figure 1) over the 4 or 8 wk grazing sessions, though a year effect did exist.

Several differences for nutritive value were detected between the two treatments and a year effect (P < 0.0001) was detected for all variables (Table 1). Regression analysis revealed an increase in the proportion of Kura clover biomass (y) in the corn-Kura clover treatment over the three years (x) (y = 0.26 + 0.14 (± 0.03) x, P<0.0001, R-squared = 0.35) from approximately 40% to 65%. Therefore, crude protein (CP) increased for 2014, 2015 and 2016, respectively, consistent with decreases in neutral detergent fiber (NDF) and increases in invitro true digestibility (IVTD) and neutral detergent fiber digestibility (NDFD). Crude protein was the only nutritive variable that did not differ (P = 0.30) between treatments (13.5 ± 0.36 and 12.9 ± 0.43% for sudangrass-Kura clover and corn-Kura clover, respectively).

Values for gain per acre were greater in the sudangrass-Kura clover treatment (Figure 3) due to the grazing of sudangrass-Kura clover regrowth. A year effect was present (P < 0.05) because of low ADG values resulting in low gain per acre in 2016. Weather conditions are believed to be the cause of low ADG and gain per hectare in 2016. Heat stress often reduces dry matter intake, subsequently reducing animal gain.

The average input and output on a per acre basis was calculated for 5 systems, alfalfa-tall fescue, alfalfa-meadow fescue, alfalfa-orchardgrass, sudangrass-Kura clover-rye, and corn-Kura clover-rye. For the alfalfa-grass system, inputs were pasture establishment- tillage, planting, seed costs, and pasture rent. Establishment costs were all in year 1, pasture rent costs were added each year. For the annual warm season-Kura clover-rye systems, inputs were Kura establishment-tillage, planting, seed costs, and pasture rent for year 1. Years 2-4 included costs for clipping and herbicide (prior to warm season planting), seed costs for the warm season annual and cereal rye, and pasture rent. Outputs were calculated based on beef gain per acre for each system, multiplied by the value per lb of gain determined by purchase and sale price for 2013 ($1.20/lb of gain).

Several management changes could be made to the annual system to make it generate more beef per acre. Applying nitrogen, although this would increase input, could greatly increase early forage production, particularly in sudangrass, potentially resulting in 3 to 4 grazings a summer, rather than two. Corn grazing could be made to last longer throughout the summer season, rather than just 4 weeks, by “stockpiling” and grazing for several more weeks. There were not great changes in corn-Kura clover nutritive quality throughout the season, and even though corn plants may mature through stockpiling, the Kura clover component should more than make up for any decreased digestibility.

The annual system proposed in this research was able to maintain cattle growth rates similar to those on perennial cool season forages in mid-summer, but improvements need to be made to the system to either reduce input costs or increase cattle gain per acre. 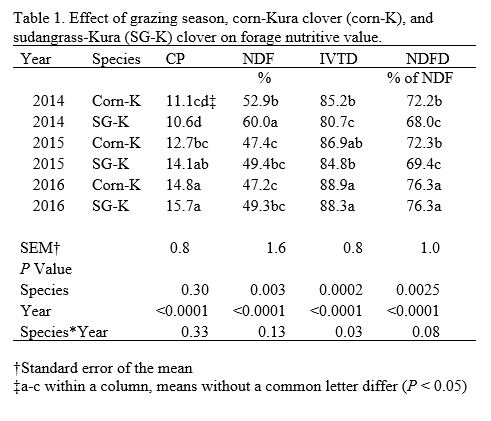 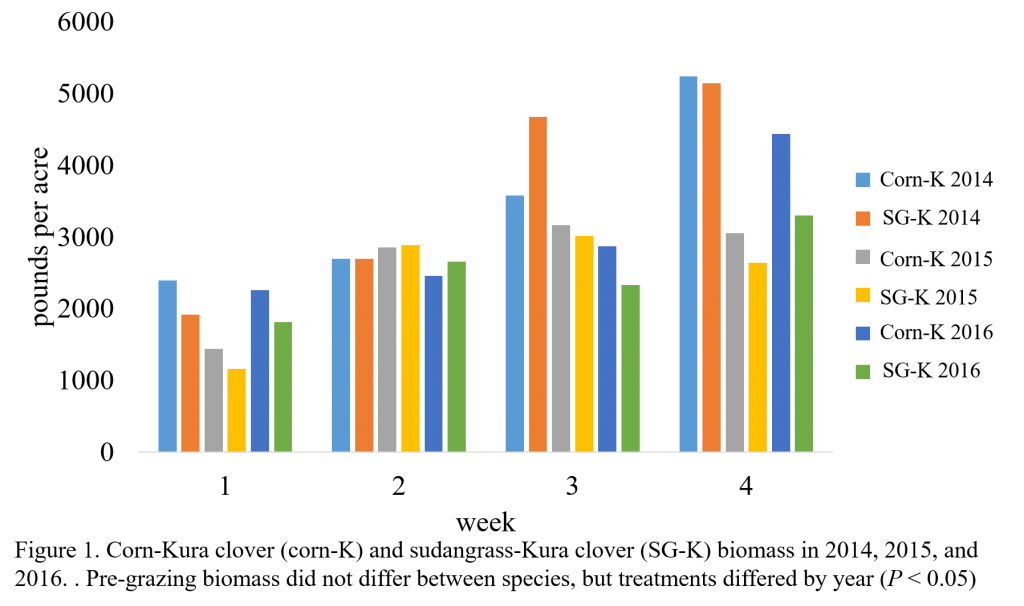 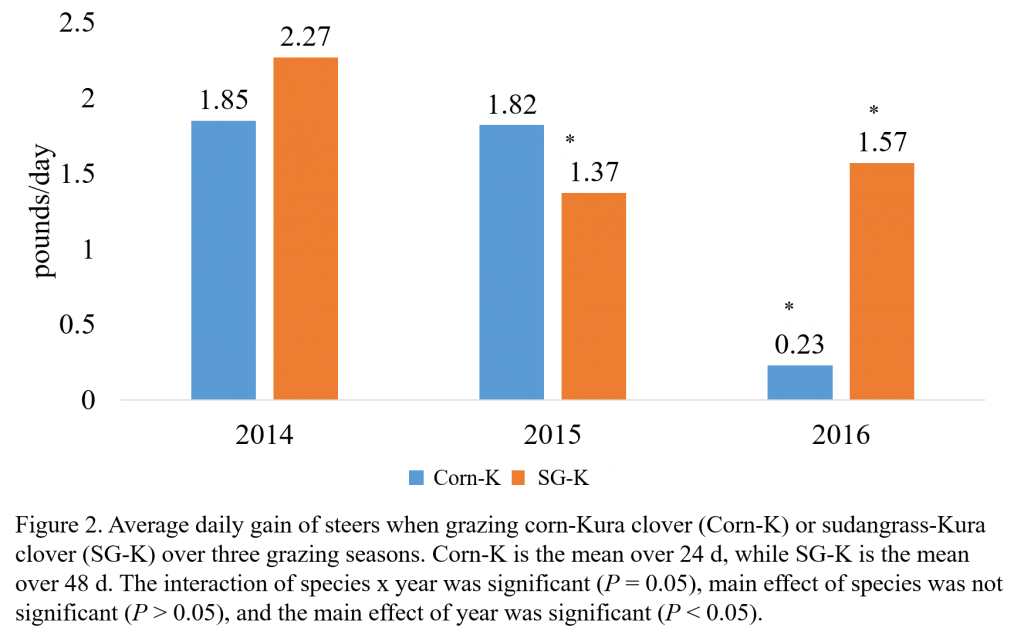 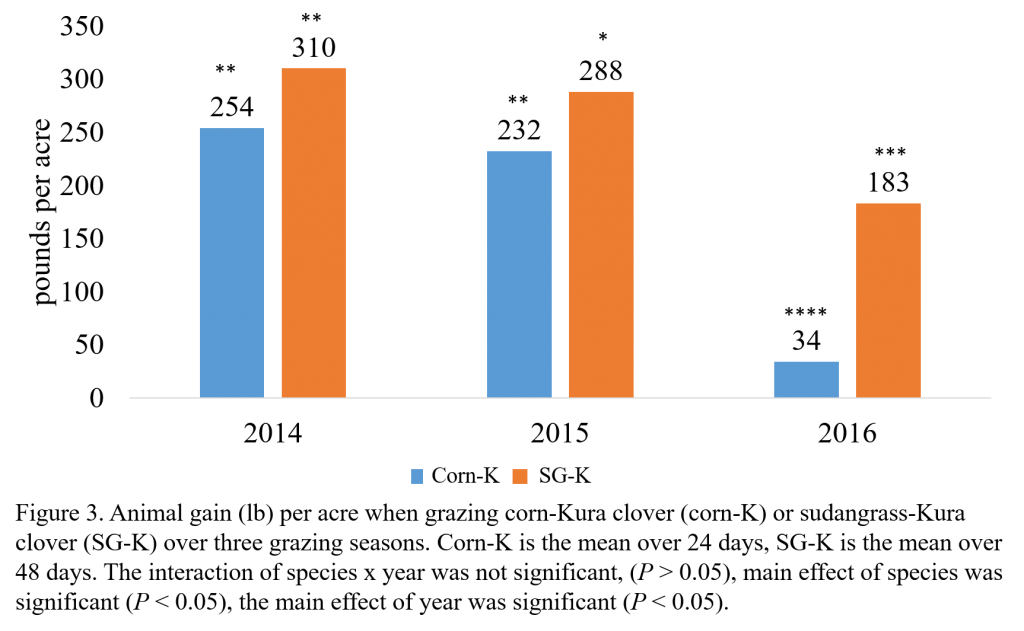 Summer of 2016 was the final field season for this project. Information generated from this project has already been disseminated through a field day at the Arlington Agricultural Research Station in August 2016. There were approximately 20 people in attendance to join the discussion about managing the summer slump. This information was also disseminated at the annual Grassworks Conference. The presentation included all three years of data. This work was described in greater detail in a dissertation and is being prepared for publication.

The objectives have met for this project and a thorough investigation has been completed. Both the sudangrass-Kura clover and corn-Kura clover treatments supply high quality forage in mid-summer. Under the experimental conditions in this study, few differences occurred between treatments. However, due to the extra 24 days of grazing, the sudangrass treatment did outperform the corn treatment in total forage harvested, producing 30% more forage harvested. The two forage treatments allow for different strategies for management and can easily be adapted to fit the needs and goals of the producer.

However, when we look at the systems in comparison to a cool season perennial pasture, our proposed warm season system needs considerable adaptation to be economically sustainable for beef producers in Wisconsin.