Many corn and soybean producers have expressed interest in using cover crops in their crop rotations to enhance soil organic matter and reduce soil erosion. However, they have struggled to incorporate cover crops into their rotations because of the difficulty of cover crop establishment, cost of seed, and lack of direct economic return. Researchers at the University of Minnesota are keenly aware of these issues, and are committed to developing new cash cover crop options that have economic potential, but also provide agroecosystem services. The winter oilseed cropping system offers soybean growers new economic opportunities through the additional production of pennycress and camelina protein, for feed and food markets, along with providing oil, for fuel, food, and industrial uses. Recent research findings indicated that the relay and double cropping systems have the potential to increase total yields (i.e. oilseed + soybean yield) up to 50% when compared to a full-season soybean. The over-yielding potential of relay and double cropping winter annual oilseeds with corn and soybean offers growers economic opportunity to make the current corn and soybean rotations more profitable. In addition to yield benefits, current research funded by the Minnesota Soybean Research and Promotion Council and the Forever Green Initiative, is also investigating economic opportunities afforded by the soybean cyst nematode and weed suppression ability of winter oilseeds. Although economic opportunities are very important to the success of this program, it is also vital to investigate the agroecosystem services that including these oilseeds in the rotation may provide. “Evaluating agroecosystem impacts of including winter annual oilseeds in corn and soybean rotations” is proposing to investigate the ability of the winter oilseeds to reduce nitrate leaching and attract pollinators/ beneficial insects early in spring when food sources are scarce in mono-crop systems. Understanding the potential of winter oilseeds to provide these benefits may further incentivize growers to adopt this system.

The foremost learning outcome of this project is to make growers aware of the issues surrounding nitrate leaching and pollinator food scarcity. The project intends to raise awareness to the fact that agriculture is the largest contributor of nitrates into the water supply, and that pollinator health and collapse is in part due to the mono-cropped landscape in which pollinators cannot find an adequate food supply for a long periods of the year.  In addition, the project will investigate solutions for these pressing issues by researching how winter annual oilseeds can reduce nitrate leaching and provide food for pollinators when little else is available. The main action objective of this project is to add value to the cropping system and promote adoption of winter annual oilseed crops by corn and soybean growers across the upper-Midwest.

The materials and methods were as follows:

This study was part of a larger study that involved a three year rotation. The rotation in the study was as follows. 2016 full season-soybeans, 2017 oilseeds (pennycress and camelina)- short season field corn, 2018 full season- soybeans. This experiment was established at two locations: Rosemount, MN and Waseca, MN. 150-30-30 N-P-K applied May 15th at each site.

Pollinator visitation at the time of peak flowering in the winter oilseed crops was determined using direct observations  Two observers walked along the edge of each plot and recorded the number of pollinators foraging over the plot.  Walks occured between 11:00 and 14:00 on rainless days when (i) air temperature was above 10 C . Ambient temperature, estimated percentage blue sky, and wind speed were recorded at the end of each walk. Walking times were recorded for each plot, but are expected to be 2 minutes. Pollinators were categorized as bumblebees, honey bees, other bees, syrphid flies, other flies, butterflies, and other pollinators.

Pan traps consisting of three different color cups (white, blue, and yellow) were placed in the plots around peak anthesis of the oilseeds. The cups were filled with detergent water to trap the insects. After 24 hours, the pan traps were filtered and the insects collected. The insects were brought back to the lab for identification. Identification was made at the order and family levels. Distribution and frequency of insect visitors was calculated.

Soil cores were taken at 5 critical times during the year starting in the fall of 2016 and continuing through the spring of 2018. The sampling times were as follows fall 2016 (following soybean harvest) spring (prior to corn planting), mid-summer (two months after corn planting), fall (following corn harvest), and spring (prior to soybean planting). The depths of soil sampling were 0-30 cm and 30-60cm. Hand probes will used to collect four samples per plot. The samples were separated by depth and combined to form a composite sample at each depth that was run for analysis. Soil samples were sent to AGVISE Laboratories (Benson, MN) to assess NO3-N. This process was used to quantify the uptake of nitrates by the winter annuals camelina and pennycress compared to the treatments not containing  the cover crops. 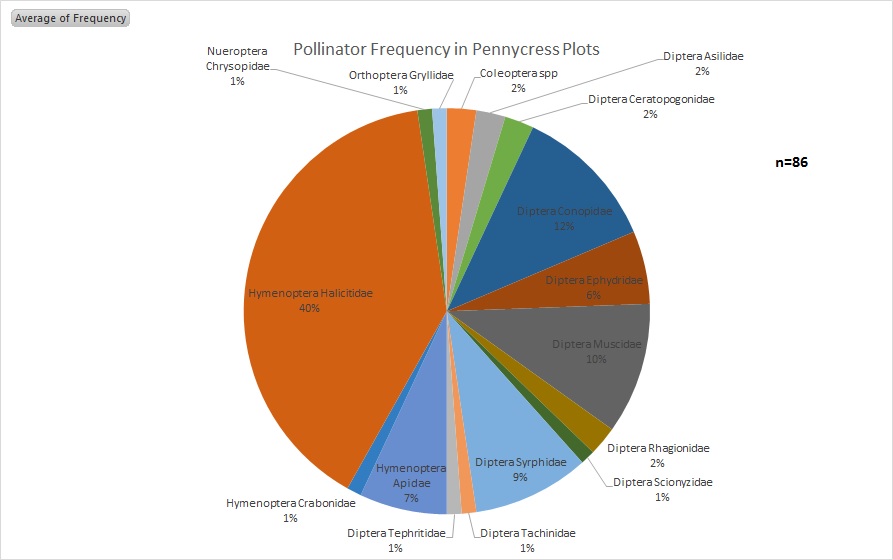 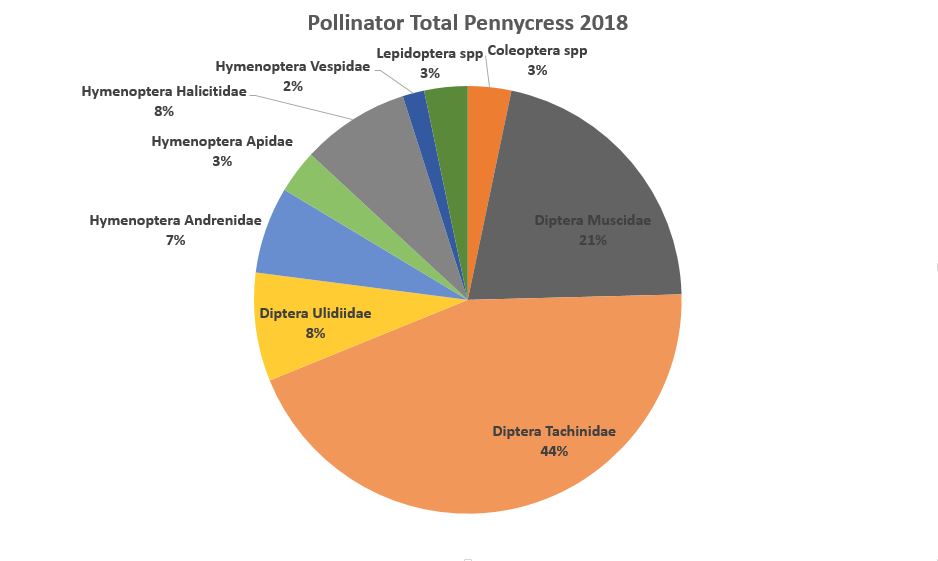 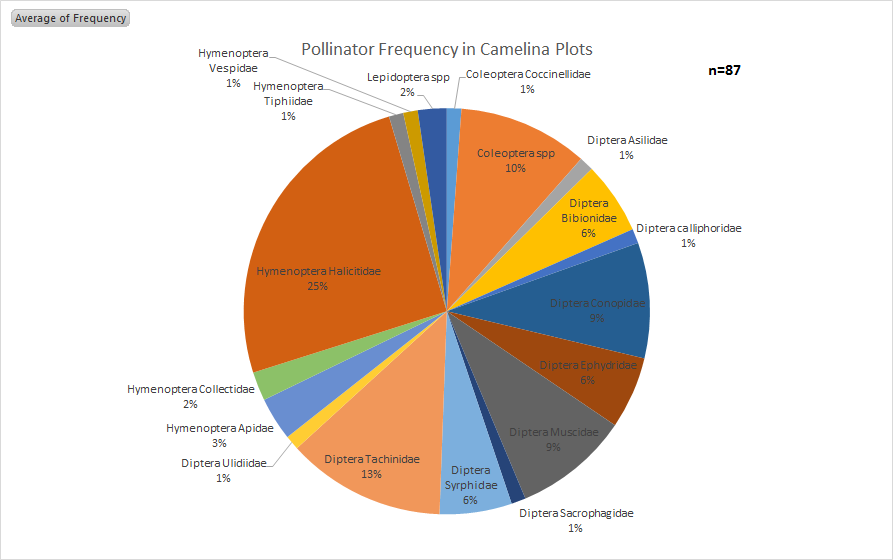 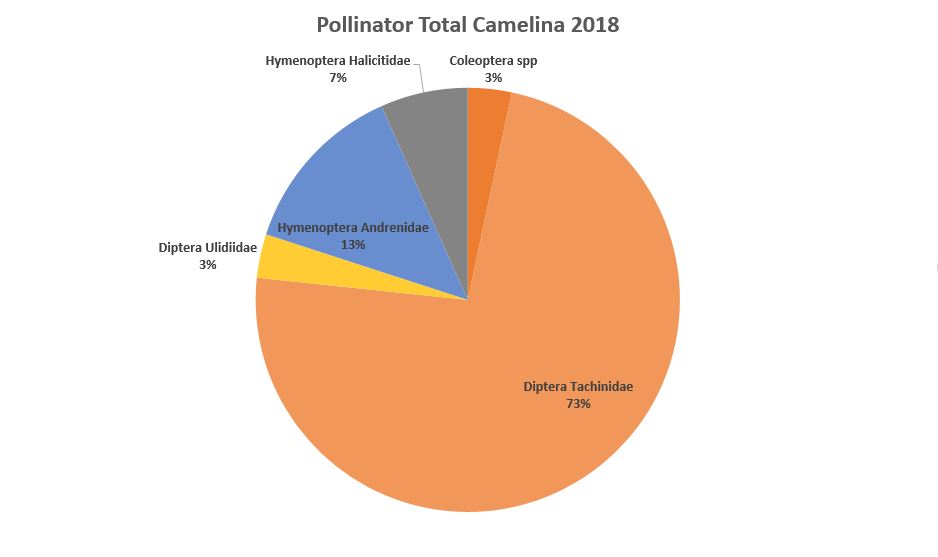 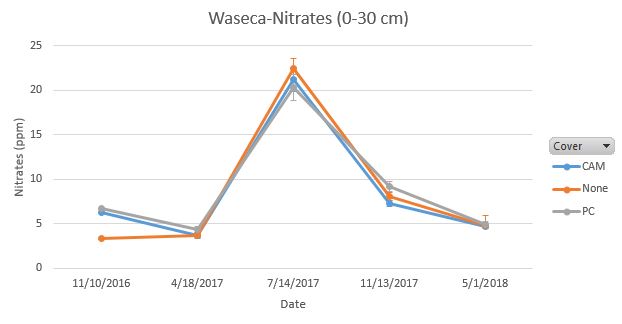 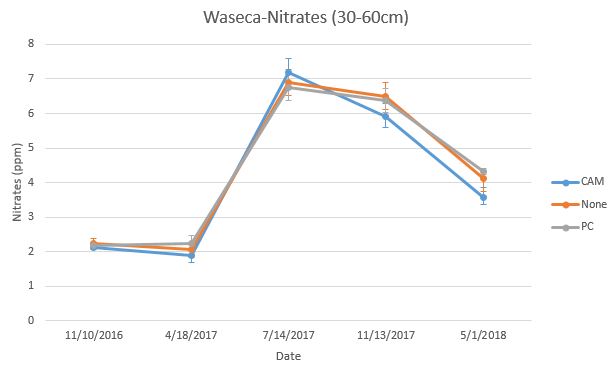 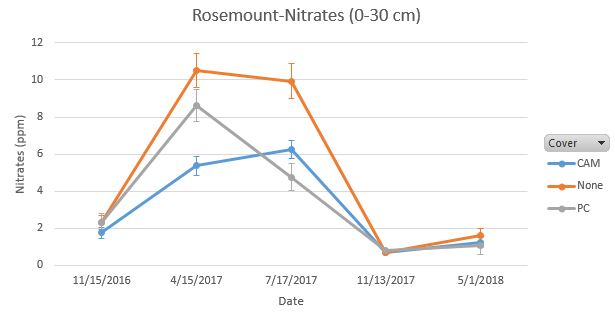 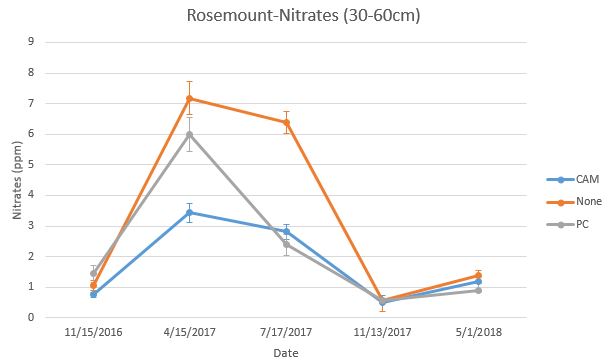 Two findings are apparent through this research.

These findings show that in addition to the potential for increased profit and production from the winter oilseed cover crops, there are also significant environmental benefits.

This project provided insight into the type and frequency of pollinator visitation to the oilseeds during flowering. It also provided information on the timing and amount of nitrate the pennycress and camelina oilseeds retain during the growing season.