Japanese beetle (JB) (Coleoptera: Scarabaeidae) is an invasive generalist insect, feeding on over 300 plant species.   JB are pests in a variety of field and fruit crops including corn, soybean, and grapes. Grape is a highly suitable host for adult JB, and turfgrass, a highly suitable oviposition site for JB, is commonly used in vineyards as groundcover between grape rows.  JB adults found in a vineyard may have overwintered there as larvae or may have moved in from surrounding landscapes.  In this project, we studied how the composition of surrounding landscapes affects JB movement into and abundance within vineyards over time. We assessed landscape composition of the surrounding landscapes of Wisconsin vineyards using classifications derived from the NASS USDA 2016 Cropland Data Layer, and selected 20 vineyards that fell on a gradient from high to low cropland in the surrounding area.  We collected weekly samples of adult JB, and performed a weekly assessment of leaf damage at these vineyards from mid-June to early September.  The longitude of the vineyards explained most of the variation in JB abundance with vineyards located further east typically having higher populations of JB possibly a result of large scale landscape differences across the state, however we observed no significant relationship between the amount of cropland in the surrounding landscape and the abundance of JB.  We additionally observed a significantly greater abundance of JB and associated leaf damage toward the edges compared to further inside the vineyards, which suggests management strategies could focused towards field edges. Adult and larvae of JB were subsampled, from 4 vineyards where an N15 enriched fertilizer was applied in order to use nitrogen isotopic analysis to determine whether JB collected feeding on vines as adults overwintered in the respective vineyards where they were collected.  At three of the four vineyards where we applied an N15 enriched fertilizer, the enrichment was not clearly detected which prevented us from using the N15 signatures of the beetles to determine their origins.  The intended outcomes of this project were for growers to have a better understanding of how surrounding landscape impacts phenology, abundance, and movement of JB within vineyards, as knowledge of JB population dynamics and landscape risk assessments are essential in developing effective management plans.  The results of our research have been shared with grape growers through the Wisconsin Fresh Fruit and Vegetable Conference and through the Wisconsin Fruit News Newsletter.

The action outcome of this project is as followed: Growers will make decisions on ground cover used between rows of grape plants, informed by our research on JB population dynamics.

We calculated the area of cropland, woodland, and grassland in the surrounding landscapes of over 100 vineyards across Southern Wisconsin by regrouping landcover classes from the NASS USDA 2016 Cropland Data Layer using ArcMap 10.3.  We produced 4 classes from this regrouping 1) Cropland, including all cultivated crops excluding hay and non-alfalfa pastures. 2) Woodland, including forests, deciduous forests, mixed forests and woody wetlands. 3) Grassland, including Hay/non-alfalfa pastures, shrublands, herbaceous wetlands, and fallow croplands. 4) Other, including all other layers that could not be classified as cropland, woodland, or grassland.

At all of the sampling points, we collected adult JB from vines at a frequency of once per week between the hours of 09:00 and 17:00 during the summers of 2017 and 2018.  We began sampling from the start of JB emergence, and continued until we no longer observed any adult JB present within the vineyards. At each sampling point we hand collected all observed adult JB from six grape plants.  Hand collection was our selected method as we did not want to draw more JB in from the surrounding landscape by using any type of trap with a lure. All collected beetles were frozen in appropriately labeled plastic bags and later counted.

At all of the sampling points, we assessed the amount of leaf feeding damage at a frequency of once per week during the summers of 2017 and 2018 whenever we sampled for adult JB.  The leaf damage assessment was performed by counting leaves and recording the proportion of leaves with damage on one of the six grape plants. We changed which plant we performed assessment on each week.  We counted the leaves on the shoot closest to the center of the vine, starting with leaves on the distal end of the shoot and continuing to the proximal end of the shoot. We would then move outward to the next shoot and count those leaves until we had counted a total of 40 leaves.  We alternated between counting leaves on the left and right sides of the grape plant from week to week. We recorded the number of leaves that had an area loss greater than 10% where it appeared the area loss was due to feeding damage. These counts were used to produce estimates of percent leaf damage.

At all of the sampling points, we sampled the soil beneath the turf grass between the grape rows for larvae at a frequency of once per month.  In 2017 we sampled using a pro II golf hole cutter to cut 5 holes each 0.15 meters in diameter and 0.20 meters in depth. We did not collect many JB larvae from this sampling, so are methodology was changed for the next summer.  In 2018 we sampled using a shovel to dig 3 holes that were 1 square meter in area and 0.20 meters in depth. This increased our sampling area and resulting in more larvae collected in 2018.

The effect of adult feeding on the N15 signatures of JB

After their feeding treatments were completed, JB were picked from the grape plants and frozen after completing their respective feeding treatments.  Later, JB were removed from the freezer. Using clean dissecting scissors, the elytra of beetles were cut off leaving about 1/4th of the elytra still attached to the beetle.  We then rinsed off the removed pieces of elytra with distilled water. The beetle was then dissected and after the gut was removed, all of the remaining soft tissue found in the abdomen and thorax were extracted.  Elytra and soft tissue were separately prepared and sent to the UC Davis stable isotope facility for N15 isotopic analysis. We intended to utilize results from this experiment to better interpret N15 signatures from field collected JB.

At the end of the summer of 2017 we selected four vineyards where we enriched N15 of the turgrasses. We enriched the turfgrasses using a backpack sprayer, applying 10% N15 enriched potassium nitrate at a rate of 100 grams per acre to all of the turfgrass between grape rows and within 20 meters of the outer grape rows.  In the summer of 2018 we subsampled adult JB from vines collected at these vineyards and at four additional unenriched control vineyards and prepared samples of their elytra which were then sent to the UC Davis stable isotope facility for N15 isotopic analysis.  We additionally sent in samples of leaves, turfgrasses, and adult JB collected from emergence cages at these vineyards. We planed to use the N15 signatures of JB adults collected feeding on the vine to determine if they overwintered in the vineyards as larvae.

In 2017 and 2018 we found JB adults present in vineyards from late June into late September.  We found that both adult JB abundance and leaf damage was statistically significantly higher at the edges of vineyard fields compared to the center. 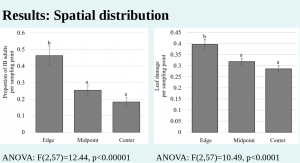 In 2018 we observed a statistically significant positive correlation between the abundance of JB adults and the percent cropland in the surrounding landscapes of vineyards, however this was not observed for 2017.  We produced a model that helps explain the relationship between the characteristics of the surrounding landscape and JB abundance within vineyards, and found that longitude explained most of the variation in JB abundance, with vineyards located further east in Wisconsin generally having higher populations of JB.  This may be due to larger scale landscape differences across the state.

The effect of adult feeding on the N15 signatures of JB

Our results show that both elytra and soft tissues of JB can be influenced by adult feeding, and that soft tissues experience a greater level of enrichment compared to elytra tissues over time. 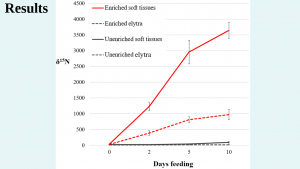 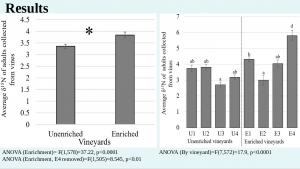 If we assume that this enrichment was effective, we can speculate that a significant portion of JB collected from vines overwintered within the turfgrasses as 23.3% of adults collected on vines at E4 had an average N15 signature over three standard deviations higher than the average N15 signature of adults collected from vines in unenriched vineyards.  Although we were mostly unable to differentiate between the origins of the JB we collected from their N15 signatures, the preliminary data from vineyard E4 suggests that overwintering populations of JB in turfgrasses significantly contribute to the populations of adults found feeding on vines.

For objective 1: We have presented data on the observed effect of longitude on the abundance of JB which may be the result of large scale landscape differences across the state, with higher populations of JB found in vineyards located further east in Wisconsin, increasing growers knowledge on the potential impact of surrounding landscape on JB populations.

For objective 2: We have presented data on the phenology and spatial distribution of JB within vineyards, increasing growers knowledge of when and where to anticipate JB within their vineyards.

For objective 3: We have presented preliminary isotopic data to growers which suggest that JB overwintering in vineyards may significantly contribute to adult populations found feeding on vines, increasing growers knowledge of potential contributions from overwintering populations.

Our results have showed us there is an edge effect for JB, with higher abundance observed towards the edges of vineyards compared to further in.  We believe that this means it might be possible to make more targeted applications of pesticides and reduce overall input.