The Iowan landscape is largely dominated by a simple rotation of rainfed maize (Zea mays) and soybean (Glycine max). This rotation of continuous summer annuals leaves the soil vulnerable to erosion and nutrient leaching, negatively impacting both soil health and the environment. Research has shown diversifying these systems can ameliorate these side effects, while also supporting higher and more stable maize yields. The higher yield stabilities may help convince farmers of the production value of diversification, in addition to its environmental benefits. However, although decreased yield variability is likely associated with changes in water dynamics, the exact mechanisms for yield stabilization remain unclear. Iowa precipitation is strongly seasonal, meaning maize regularly experience some degree of summer drought stress during yield-defining growth stages. Diversified systems may improve soil quality by increasing organic matter and/or improving soil structure. This could increase the water holding capacity of the soil, thus reducing water stress during critical maize growth periods. The amount of plant-available water a soil can hold is commonly assessed by creating a soil-water retention curve (SWRC), wherein the amount of water held in the soil at various negative pressures is measured. A SWRC provides an excellent quantification of a soil's functionality with regards to water. However, the measurements are time intensive and require specialized equipment, making them inaccessible to most farmers. This project will collaborate with farmers to create SWRCs for on-farm side-by-side trials testing differing degrees of cropping system diversification. The results will be shared with farmers and researchers to illustrate how diversification can .affect a soil's ability to buffer variability in precipitation. Farmers will use this information to evaluate whether cropping system diversification can enhance functional aspects of their soil while simultaneously improving environmental quality.

Through this project, farmers and researchers will learn how diversifying a maize/soybean system affects the soil's ability to hold water. Farmers will increase their engagement with diversification-based on-farm research. Researchers will expand their knowledge on whether diversification-induced soil changes seen in university experiments are mirrored in side-by-side comparisons on farmer's fields. In the long term, this project will help to increase farmer adoption of cropping system diversification to build soil quality, reduce their exposure to weather­ related production risks, and improve the environmental footprint of Midwestern agriculture.

Practical Farmers of Iowa and the Iowa Learning Farms initiated a long-term on-farm coordinated strip-trial where-in farmers committed to keeping an area of their farm in this research program for 10 years. The experiments consisted of two treatments: use of an over-wintering fall-planted rye cover crop, and a control with no cover crop. All other management was consistent between the plots, but was unique to each farmer's production system. Additionally, the USDA has been managing long-term cover crop trials for the past 20 years. By leveraging these long-term experiments, I had access to taking measurements in plots that would exhibit long-term effects of cover-cropping - a unique opportunity in this world of 3-year research grants. I am very thankful for this access, and consider management of long-term plots to be a public service. 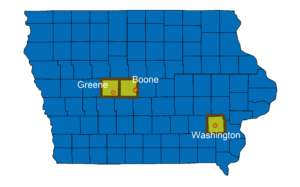 Soils were sampled for both weed seed germination and water-holding capacity measurements. I chose to take soil samples immediately before or after planting to minimize the amount of root material in the soil samples. All fields were no-till, so the previous year’s planting rows were still apparent; samples were taken between planting rows in the middle of each plot.

For the weed seed measurements, we used PVC pipe. For the water-holding capacity measurements, we used specialized equipment used that is designed to sample bulk densities of soils. A hole 10 cm deep and ~1 foot wide was dug. A metal tube held a spacer, the sampling ring, another spacer, and was placed in the hole and capped with a lid. The sampling ring was struck with a heavy flat weight to ensure the ring entered the ground evenly. Once the top of the ring was flush with the hole surface, the surrounding soils was dug out and a spatula was used to scoop the entire metal tube out from the soil. The spacers and sampling ring were removed from the metal tube. The soil was ‘cut’ flush by using a knife to cut through the slot between the spacer and the sampling ring. Care was taken to ensure the ‘up’ and ‘down’ orientation of the soil sample was maintained. The soil was inspected to ensure it was free of rocks, worm, or other foreign material that would affect the pore space in an un-representative way.

Once the spacers were cut away, the metal ring containing the intact soil core was wrapped in aluminum foil, labeled, and stored in a cooler.

The pressure cell method was used to determine the amount of water held by the soil at pressures ranging from atmospheric to 500 cm H2O.

Prior to being placed in the pressure cells, the soils were saturated. The amount of water needed to saturate the soil is used to calculate pore space, therefore it was important to ensure there was minimal air trapped in the soil during saturation. To achieve this, the cores were placed in a vacuum chamber. A solution of 0.01 M CaCl was added until the level reached the bottom of the empty sampling core taped to the top of the soil sample. A vacuum was applied to remove air from the water. The samples were left in the vaccum chamber for 24 hours.

After saturation, the empty soil core taped to the top of the sample was removed and the entire saturated sample (metal ring, soil, cheesecloth, electrical tape) was weighed in a tared sour-cream container. The sample was immediately moved to the pressure cell footprint with a previously-weighed cylinder placed beneath it. The weight of the water remaining in the sour cream container was recorded.

The samples were allowed to drain at atmospheric pressure (2.5 cm H2O) for 12-24 hours. The cylinder and water were weighed, the water was dumped into the sink, the remaining water blown out with compressed air, and the empty cylinder was returned to the funnel draining the pressure cell.

Air pressure was applied to the sealed chambers containing the soil samples in an increasing manner. After the indicated duration, the weight of the water released at that pressure was recorded, dumped, and the empty cylinder was returned to the pressure cell outlet funnel. The schedule of pressures is:

Data was processed to obtain a value for the volumetric water content of the soil sample at each pressure, together creating a soil-water-retention-curve for each sample. The calculations are available using an example dataset on a github repository (https://github.com/vanichols/ghproj_sare18) and will be more easily available on my research website once I build it.

Cover cropping significantly reduced weed seedbanks in two of the five trials sampled, had no effect in two, and slightly increased the weed seedbank in one by a non-biologically significant amount. The weed community was not significantly changed with cover cropping, mostly due to the absolute domination of waterhemp (>90% of seedlings). 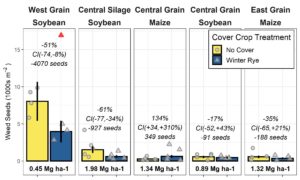 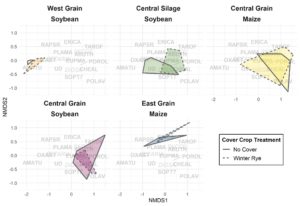 The effects on soil water holding capacity varied by site. The impact of cover cropping was not related to the soil texture of the sites, as has been previous proposed. We propose cover crop roots structure as a possible, but un-explored contributor to site-specific impacts of cover cropping on a soil's water holding-capacity in no-till conditions.  The journal article is in press. 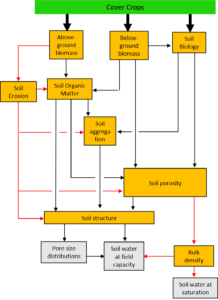 A professional presentation was given at the American Society of Agronomy International Meetings in November 2019 in San Antonio Texas (Weeds and water: Farmer-driven questions answered with farmer-driven data), as well as the same meetings in November 2021 in Salt Lake City Utah (To Plant or Not to Plant? Decision Optimization Frameworks Applied to Midwestern Winter Cover Crops).

An open-source peer-reviewed article was published describing the effects of long-term cover cropping on weeds.: https://www.frontiersin.org/articles/10.3389/fagro.2020.591091/full

and another open-source peer-reviewed article is in press, describing the effects of long-term cover cropping on soil water holding capacity:

A 3-part podcast was created that incorporated:

The podcast recordings are available on the Practical Farmers of Iowa website: https://practicalfarmers.org/2021/10/bonus-episode-consider-the-soil/

I wrote a blog post about the soil water holding capacity results for Practical Farmers of Iowa: https://practicalfarmers.org/2021/02/does-cover-cropping-change-the-sponginess-of-the-soil/

I wrote a guest blog for the Sustainable Secure Food Blog: https://sustainable-secure-food-blog.com/2021/03/22/how-can-you-prevent-weed-seeds-from-germinating-in-your-garden/

I wrote a guest article for the Practical Farmers of Iowa spring magazine (Spring, 2021) about my experience doing on-farm research titled 'The Journey to an On-Farm Research Project: A Student's Tale". https://practicalfarmers.org/2021/04/the-journey-to-an-on-farm-research-project-a-student-s/

I presented at the Practical Farmers of Iowa cover crop bootcamp in Winter 2020 on cover crops and weeds: https://www.youtube.com/watch?v=VcYj-kGR5jg

Because of the relationships I created through this project I was able to do another project looking at how cover crops affect weeds - in that case I found very exciting results, indicating long-term use of cover crops reduces the size of the weed seed bank, particularly waterhemp seeds, which is a weed with multiple herbicide resistance issues. My results inspired my advisor to undertake a modelling study (which has been published) and another researcher at the University of Lincoln to take similar weed measurements in her long-term cover cropping plots. The more evidence we find supporting cover crops as an effective tool to combat herbicide-resistance in weeds, the better cover crops will look economically for farmers.

I can read claims about the magic of cover crops with a much more discerning eye. For example, claiming that the organic matter increases in the top 5 cm will depend heavily upon when that measurement is taken. I am also aware of more instances in which claims are made about cover crops that are not substantiated by science, and am very careful to provide farmers with information rather than recommendations. Creating the podcast was fulfilling and engaged more people in thinking about the past and future of our soil, which I believe falls under the wide umbrella of sustainable agriculture.

I hope future studies look at the connections between cover crop roots and the impacts cover crops have on the soil. In the literature I found for the same above-ground rye cover crop biomass, the root biomass could differ by as much as 10-fold, even in the same field! Is soil texture a strong predictor of cover crop root growth? Is there anything managerially we can do to manipulate cover crops to invest more or less in roots? Are genetics a consideration? Are roots or above-ground biomass more important for ecosystem services? So much to investigate!