With the goal of sustainably and holistically reducing producer expenditures towards labor, chemical, and equipment resources for the economic management of grapevine canopies and diseases, this proposal seeks to pursue a novel genetic avenue of canopy management. Towards alternatively alleviating the substantial chemical demands associated with grapevine fruit and canopy protection, unique grape germplasm will be explored. Specifically, lacelike leaf shape, a foliar trait under genetic control, will be characterized within segregating populations constructed from crosses between cold-hardy genotypes with simple, wild type leaves, and a mutant, cold-tender, Vitis vinifera L. cultivar with a highly dissected, nearly compound, lacinate leaf trait, ‘Chasselas Ciotat’. The unique leaves of ‘Chasselas Ciotat’ provide the opportunity for increased light and wind penetration within the canopy, potentially reducing overhead costs of both cultural maintenance and pesticide applications for producers.

On-going work within our lab has discovered the lacinate leaf trait is heritable in ‘Chasselas Ciotat’ derived self-progeny, but it is not dominant to wild-type leaves in F1 crosses. This indicates the necessity of both further exploration of its inheritance in segregating progeny and development of molecular markers for incorporation of the trait into diverse genotypic backgrounds. Following the creation of segregating populations through self and test-crosses with ‘Chasselas Ciotat’, leaf traits will be analyzed using chi-square tests to determine inheritance of qualitative traits. Qualitative analysis will be combined with quantitative leaf trait evaluation, measured through digital image processing techniques. These quantitative and qualitative data will be integrated with molecular characterization of the populations, thus enabling the identification of valuable Quantitative Trait Loci (QTL) to enhance marker assisted selection in future populations. The leaf trait will be beneficially combined with the North Dakota State University Grape Germplasm Enhancement Project’s program goals of integrating resistance traits against fungal pests such as powdery mildew and black rot into promising cold-hardy, interspecific Vitis spp. selections. Through dissemination of results in the form of germplasm for the North Central U.S. grape growing community, and through the dispersal of plant material and relevant molecular marker and linkage associations via referred publication, this project has the potential for substantial economic outcomes for growers across the Midwest and throughout the greater North American grape growing community in which canopy management for disease reduction and fruit quality improvement is a chief, annual concern. Simultaneously, extension activities such as notes, grower talks, and field-days strive to further expose regional grape-growers to results and progress.

Further learning and action outcomes will be accomplished through output 3.7 scientific journal articles and germplasm resources distributed to the research and grape breeding community.

A total of four grapevine populations were developed. Dried pollen, collected from ‘Chasselas Cioutat’, was applied to pistillate Vitis accessions (E.S. 5-8-17 and B.27) and to emasculated ‘Frontenac gris’ flowers. Additionally, the fruit from ‘Chasselas Cioutat’ flowers used for pollen collection were retained as a source of open-pollinated, presumed selfed seeds. The timing of the ‘Chasselas Cioutat’ flowering under greenhouse conditions did not intersect with the flowering of any other Vitis accessions, thus the seeds are assumed to be self-pollinated in their origin.

A total of 17 landmarks were placed on leaves using GRALED v2.04. This allowed for calculation of 11 OIV and modified OIV descriptors and 15 additional landmark lengths.

In addition to the mean values of individual OIV descriptors and lengths, overall principal component analysis was conducted on the collected traits using prcomp in R. Visualization of PCA results was conducted using the fviz_pca_var, fviz_eig, and fviz_contrib of the factoextra package.

Using the shapes package in R, generalized Procrustes analysis was performed on landmarks with procGPA (Dryden, 2014). This allowed for principal component analysis of global shape which was then graphically rendered using ggplot2 and depicted with viridis color package.

To date, over 2,000 seedlings have been generated through controlled crosses and self pollination to achieve a segregating generation. This work has been conducted in the greenhouse, using crop forcing techniques following seedling exit from juvenility stage.

Leaves of individuals are being monitored to the fifteenth true leaf stage, at which point plants are classified as 'Chasselas Cioutat' like mutants, or wild-type, simple leaves. For selected, genotyped individuals (~384), landmark morphometric analysis is on-going for a subset of 4 leaves per individual using the previously described methods.

Leaf tissue samples were submitted for genotyping via two unique technologies: genotyping-by-sequencing (GBS) and RNase H2 enzyme-dependent amplicon sequencing (rhAmpSeq). This has given rise to dense molecular maps which are undergoing construction via LepMap3 software, after which marker-trait associations will be further investigated.

The plotting of traits along PC1 and PC2 depicts how PC1 is driven by length measurements. 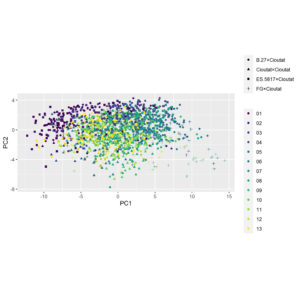 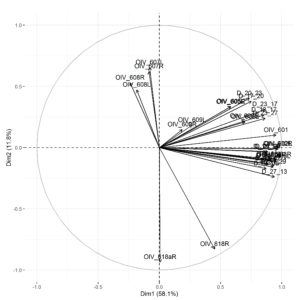 The eigenvalues of the top five PCs ranged from 61.8% to 2.7%, only the top three PCs accounted for more than 5% of variation individually. 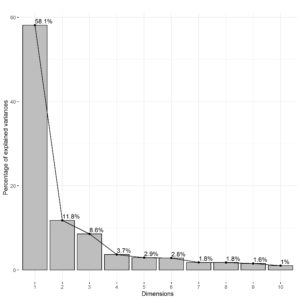 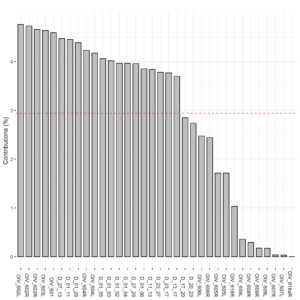 Most length measurements contributed nearly equal variance from each of the left and right version of the metric. PC2 variance is composed of OIV 607, OIV 608, and OIV 609 (angles between main veins) and the petiole sinus OIV 618aR and OIV 618. 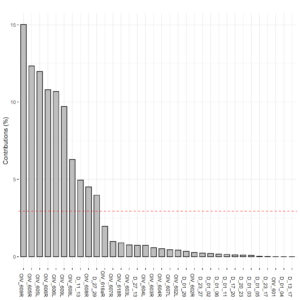 PC3 variation is also derived from OIV 608 and OIV 609, as well as OIV 605 and OIV 606 which are measurements of the petiole sinus to lateral leaf sinuses. 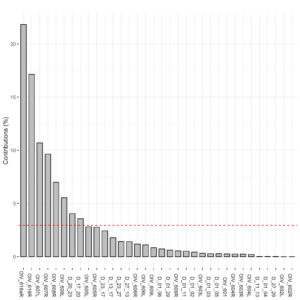 Considering that PC1 accounts or leaf size, the PC measurements may be driven by leaf emergence time relative to sampling. Sampling occurred when vines had between 16 and 20 unfolded leaves. Leaves 01 and 02 rarely expanded much and leaves 10 to 13 were generally still in the process of expanding, thus quite small. As a result, the highest PC1 values generally belong to leaves 05 to 09, because they were largest at sampling. From negative to positive PC1 values there is a general transition from initial emerged leaves (leaves 01 to 03), to recently emerged leaves (10 to 13), followed by the most expanded leaves at time of sampling. PC2 gives rise to separation among sampled leaves, with the earliest emerging leaves having the greatest values and the most recently emerged leaves generally having the lowest values. However, the OIV PCs examined have a high amount of overlap between groups of leaves and are not crisply defined based purely on OIV and length metrics.

The distribution of individuals along the PC GPA plot yields an evident and clear separation among leaf number. The earliest to emerge leaves are clearly separated from the most recently emerged leaves with separation along PC GPA1 and PC GPA2; however a mixture occurs around leaves 03-06 indicating a developmental transition.

This developmental transition is best visualized in the mean leaves of each cross. The increase in sinus depth is clearly progressing in mean leaves 04, 05, and 06. After this point the overall mean leaf shape shifts towards a more stable, mature leaf form.

Efforts are on-going; however, both discrete and quantitative variation has been observed in segregating progeny of 'Chasselas Cioutat' derived lines. The work towards landmark morphometric analysis will complement the genotyped lines.

Collectively, through the first year of the project we have observed outstanding variation in progeny of Vitis spp. The unique leaf shape of 'Chasselas Cioutat' segregates with unexpected consequences to seration, depth of sinuses, and variation within plants. Marker-trait-associations are in development, with results anticipated to change how we apply selection within the North Dakota State University Grape Germplasm Enhancement Project.

A new collaboration was established with the University of Minnesota grapevine breeding program were seedlings from a similar cross were developed and shared for phenotyping.