Palissage is a novel, promising alternative to hedging that has only recently been studied. It consists of either Shoot Wrap (shoots are wrapped on the top catch wire) or Shoot Tuck (shoots are tucked back into the catch wires). But palissage technique application timing has not been evaluated before, so a four-year study was initiated, to evaluate technique applications at two timings: Early (E) = 30 cm and Late (L) = 90 cm above the top catch wire. Vine canopy and fruit parameters, and spray penetration to the clusters, were investigated in response to palissage techniques compared to the hedging technique established as control.

Cluster compactness, or the number of berries per cm rachis length, was reduced by Shoot Wrap applied early (SWE) by 2.6 berries per cm rachis in 2016 and by 0.9 to 2.4 berries in SW in 2017 and 2018. Palissage techniques also decreased lateral emergence in the fruit zone by 14 to 25 lateral shoots between the hedged Control (C) and Shoot Wrap (SW), regardless of timing in 2017 to 2019. These findings suggest that the retaining of shoot tips, a strong sink, may have reduced carbohydrate re-translocation to support lateral shoot growth and berry growth. Yields were higher in vines subjected to C and Shoot Tuck (ST) applications in both 2017 and 2018 except in Control Early (CE) impacted by feeding or downy mildew damage in 2019. Number of clusters did not differ among techniques or timings except in 2018 and 2019 when techniques applied early showed fewer clusters per vine than late especially STE in 2018. There seemed to be no difference in fruit composition or many canopy density parameters. Spray penetration to the clusters was improved by palissage techniques in 2018. Downy mildew incidence or severity did not greatly differ between techniques or timing. Palissaging may be cheaper to implement than some common viticultural practices such as hand leaf removal. The use of palissage in place of hedging, has potential to improve canopy microclimate and reduce cluster rot incidence and severity, through vegetative and reproductive growth reductions.

2. To evaluate carry-over effects of palissage on the same site established in the cool and wet Northeast through 2019 as a sustainable alternative to hedging.

3. Develop a cost analysis to determine the economic impact of palissage compared to hedging.

4. Educate the New York State winegrape industry about the potential of palissage through Appellation Cornell newsletters, tailgate talks with growers, and grower conferences.

Growing Vitis vinifera winegrapes (i.e. commonly-grown European cultivars such as Riesling and Cabernet Franc) in the Northeast US comes with many challenges. Several of these challenges include cultivars’ susceptibility to fungal diseases including cluster rot and Botrytis cinerea and excessive vine vigor due to the region’s cool and wet climate and high organic matter soils. Excessive vine vigor (long internodes, strong lateral growth, and large leaves) can lead to longer periods of leaf and fruit wetness and limited light penetration in the fruiting zone, lower spray penetration, and a humid microclimate, all of which lead to more and longer disease infection periods.

As a different approach to hedging, “palissage” has been investigated by the Vanden Heuvel research group at Cornell, following feedback from growers. When palissage is applied, for Shoot Wrap, shoots are either wrapped around the top catch wire, or for Shoot Tuck, shoots are tucked back down into the canopy (Figure 1). Preliminary results were promising; lateral emergence and cluster compaction were reduced. Earlier cessation of shoot growth and reduced lateral emergence were also reported by growers, eliminating the need for leaf removal to open up the canopy (Vanden Heuvel, unpublished data). Palissage has the potential to improve light interception to the clusters and wine quality. Given a significant reduction in disease incidence on palissaged vines in contrast to hedged vines, palissage can be incorporated in the grower’s disease management program, reducing the need for fungicides (France et al 2018).

The study was established in growing season 2016 on Vitis vinifera Cabernet Franc cl. 4 grafted on 3309c rootstocks located in a 0.25 ha research vineyard in Lansing, NY with two experimental units per row as described in the proposal. Three shoot tip management methods (shoot wrapping, shoot tucking, hedging (control)) were evaluated in a randomized complete block design in a factorial with two timings of treatment application: early (shoots reach 30 cm above the top wire) and late (shoots reach 90 cm above the top wire).

Shoot length of lateral shoots of 32 shoots per experimental unit in the fruiting zone, mid-canopy, and upper canopy for all treatments, were quantified as detailed in the proposal in 2019. Canopy structure (i.e., leaf and cluster light interception) was analyzed on each vine using enhanced point quadrat analysis at pre-harvest as described in the proposal (Meyers and Vanden Heuvel 2008). Leaf area was taken on both primary and lateral leaves on one shoot per vine, or eight shoots per experimental unit.

Following spray application of water at veraison, when vines in this region are most susceptible to cluster rot, spray penetration to clusters was evaluated with spray penetration cards, by counting the number of grids that had more than 50% coverage, with blue color indicating spray coverage and yellow color indicating no spray coverage (Salyani et al 2013).

At harvest, lateral shoots were counted and measured in the fruit zone, mid canopy, and upper canopy. Grapes from each experimental unit were harvested for yield per panel which consisted of four vines, or half an experimental unit, due to some animal feeding damage on October 15, 2019. Twenty clusters per experimental unit were collected and analyzed for pH, Brix, titratable acidity, and yeast assimilable nitrogen, using standard procedures (France 2017).

Following harvest, when cane-pruning dormant vines to 40 nodes, weights of fruiting wood from the previous growing season was collected for each vine in each experimental unit for all treatments as discussed in the proposal. 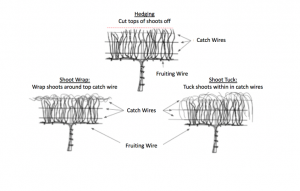 Palissage has the potential to be used by growers who want to fine tune their canopy management programs to meet their winemaking goals. Reductions in lateral emergence and cluster compactness and improvements in spray penetration with spray cards suggest that palissage may help wine grape growers save money on disease management and reduce crop losses to cluster rot and other diseases over several growing seasons. While labors costs are still a concern and palissaging can be labor intensive, the cost analysis showed that growers can save on hedging and leaf removal and that it may not be more expensive to do palissage, depending on the vineyard or winery.

This project is being analyzed and summarized. Parts of the findings were shared at the American Society of Enology and Viticulture - Eastern Section conference in 2018. The project will continue to be shared with the scientific and industry communities through publications, meetings with growers, and conferences.

Palissage can reduce the need for fungicide use, leaf pulling, and other management practices through lateral emergence and cluster compactness reductions. Such findings were shared with grape growers in the Finger Lakes region, the Midwest US, and the UK. One local grower has implemented the use of Shoot Tuck technique with a cover crop as a part of their canopy management program. Other growers tested out palissage techniques but ended up hedging later in the season when they were concerned about downy mildew incidence due to a dense upper canopy but they reported fewer lateral shoots and lower cluster rot incidences. One grower in Colorado switched to late hedging near veraison, or when berries begin to soften, as they were concerned about the time and labor needed to untangle and prune woody material in the winter.

Palissage can be used as a canopy management tool to reduce lateral emergence and cluster compactness, reducing disease incidence and severity. It may possibly improve the sustainability of vineyard production through possible reductions in fungicide use and reductions in soil compaction from fewer tractor trips through vineyards. The timing of application may have impacted vine parameters, suggesting that delaying shoot tip modifications might also be instrumental in slowing down lateral growth, potentially improving light penetration, without negatively impacting yields in C and ST. Yeast assimilable nitrogen (YAN), which is important for yeast fermentation in winemaking, was higher in the SW technique in 2018, which may make SW a good canopy management tool to improve YAN levels.

It was also found that hedging when done later can slightly reduce lateral emergence and cluster compactness in some years but palissage technique applications had much more pronounced impacts at both timings than hedging.

This project has been wrapped up and results are being written up for manuscript submission to a journal this summer. Root dynamics are also currently being investigated as well, to determine impacts of palissage techniques on the grapevine root system in the long term. Findings were and are being communicated with growers through social media and several conferences including at the American Society of Enology and Viticulture conference in 2018.

The economic sustainability of palissage ought to continue to be investigated on a commercial scale throughout the growing season especially at pruning removing a lot of woody dormant growth. Palissage has the potential to be implemented only once in contrast to hedging which may be done up to five times per growing season.