The purpose of this project is to evaluate cold hardy native American hazelnut pollenizers for their utility as pollenizers for disease resistant European hazelnut cultivars slated for release from Rutgers University in 2019, which could substantially increase their productive range. These commercial-quality European hazelnuts are resistant to the disease eastern filbert blight (EFB), which historically prevented their production in eastern North America.  However, frost damage to their male flowers (catkins) can limits their usefulness in colder parts of the region.  Hazelnuts are self-incompatible, which necessitates the planting of additional cultivars in hazelnut orchards as pollen parents know as pollenizers (Mehlenbacher et al, 1997, Olsen et al, 2000; Thompson, 1979). The pollenizers that are suggested for these Rutgers selections are adequate for growing climates similar to New Jersey and areas with milder winters, but expanding farther north would risk the catkins becoming frost damaged in some years and limiting pollen shed, therefore decreasing yields.

Hazelnut has many qualities that makes it a sustainable crop and a worthwhile addition to any farms: low input requirements, high yields, high value (and ability for value-add with confections and oils), only four years from seed to first crop, mechanically harvested, and high nutritional content. It is often used by those practicing permaculture for these reasons. The work proposed will contribute to the development and establishment of this new crop in the northeast US region.

The release of EFB-resistant Rutgers breeding selections will provide farmers with a crop that was previously not able to be grown in the eastern US due to EFB. With EFB no longer the main concern of growing hazelnuts in the region, the limiting factor is cold hardiness of the male flowers. Cold hardy pollenizers are necessary to protect yields in colder regions, and from highly variable weather, where warm spells followed by cold spells can damage catkins that begin to break dormancy. The growing zone for the Rutgers breeding selections can be expanded significantly northward if American hazelnuts are found to be suitable as pollenizers from this study. Aside from this fundamental research, very little has been done on the use of American hazelnuts as pollenizers in European orchards, despite the numerous benefits this would have in expanding the growing range northward.

Phenology ratings will be recorded two times weekly to determine the ideal time to collect pollen from extended catkins as described in Capik and Molnar (2014). When pollen is in peak shed catkins will be collected from the field. Pollen will be sifted through a filter onto a large sheet of paper, and then transferred to a 1.4mL micro centrifuge tube. Pollen will be frozen until female flowers have become receptive.

The American pollenizers for this study will include five early, mid, and late pollen-shedding trees, supported by phenology data from 2017 and 2018. The C. americana plants were sourced from PA, WI, IL, NJ, OH, MO, MI, and MN.  The original nuts to grow these trees were collected with the assistance of the Arbor Day Foundation and planted at the Rutgers Fruit and Ornamental Research Center in Cream Ridge, NJ in 2010-2011. In addition C. americana, pollen from three C. avellana cultivars will be collected from known compatible pollenizers available on site as controls.

The reason for choosing early, mid, and late pollen-shedding American hazelnut pollenizers is to ensure there is adequate pollen available when the European hazelnut female flowers are receptive.

Pollen collected from C. americana pollenizers will be grown onto an agar and sucrose petri dish. The germination solution will consist of agar (10g/L), and sucrose (100g/L), as described in Fattahi et al (2014). The solution will then be microwaved and poured into 20 mL petri dishes. Approximately 100 grains will be used to test germination for each replicate of each sample, and incubated at 25 Celsius. Pollen will be germinated from fifteen wild C. americana, and pollen from three C. avellana, with three replicates of each.

Pollen germination rate will be determined by measuring pollen tube growth with a light microscope at x100 magnification. Germination is considered successful when the pollen tube reaches pollen size, usually 20-30 micrometers. Germination counts will be conducted 1, 4, 8, 24, and 48 hours after incubation.

Effects of pollen source will be determined by analysis of variance (ANOVA) according to the general linear model procedure of a statistical program. Differences between treatment means will be separated by Fisher’s protected least significance difference (LSD) test at the 0.05 probability level.

Pollen expresses only the dominant s-allele. 33 “tester” pollen parents with known s-alleles are used to pollinate the female flowers for testing. The female flowers express both of the s-alleles, and the pollination will be incompatible if either s-allele is expressed in the pollen. Once two pollen parents yield incompatible pollinations and all of the rest are compatible, the two s-alleles are known for that tree/cultivar. The dominant s-allele can then be determined by looking at the s-allele hierarchy (Mehlenbacher, 1988, 1997a, 2000, 2014).

The procedure from Mehlenbacher (1997a) will be used to determine the incompatibility alleles for the C. americana pollenizers in this study. Female flowers must be collected from two to four branches of each bagged pollenizer when styles are protruding 2-6 mm. These will be placed in petri dishes. Each individual female flower will be pollinated with one of the 33 “tester” pollen parents, from clonal material at Oregon State University, and placed in the petri dish overnight. Flowers will be stained with aniline blue dye and fluorescent microscopy will be used to see pollen tube growth. If the tubes are short and cannot penetrate the stigmatic surface, the test is incompatible. If the pollen tube is long and can penetrate style tissue, the test is compatible.

Layout of the experiment will be a completely randomized design. Effects of pollen source and female parent on nut and kernel characteristics will be determined by analysis of variance (ANOVA) according to the general linear model procedure of a statistical program. Differences between treatment means will be separated by Fisher’s protected least significance difference (LSD) test at the 0.05 probability level.

S-alleles for seven of the American hazelnut pollen parents were tested at Oregon State University in February 2019. Only seven were tested due to availability of female flowers at the time of travel. Of the seven tested, only four exhibited conclusive results. Interestingly, none of the s-alleles were shared among the four pollen parents, implying a high level of genetic diversity. The resultant s-alleles were also relatively uncommon, meaning incompatibility with known cultivars will not be an issue, increasing the utility of the plants as potential pollenizers.

S-allele testing on the remaining plants will be conducted in February 2020. Any plants not able to be tested in Oregon will be tested at Rutgers University in mid-late February.

In-vitro germination percentage was not able to be determined this past year. The pollen degraded in the time it took to perfect the protocol. The protocol was successfully tested on fresh pollen and will not be a problem on pollen samples in 2020.

Successful nut cluster percentage (percent fruit set) was determined for all pollenizers used in the study plus a European pollen mix and American pollen mix. The highest percentage was 45%, and the lowest was 0%. The best results were achieved by plants that may be suspected as hybrids, which will need to be further investigated. Ten of the plants generated nut cluster percentages above 5%, while eleven were below 5%. Of the samples above 5%, the average value was 23.5%.

Further statistical analysis will be conducted after the nut cluster percentage for 2020 is determined. It does not seem that the pollen parent has a negative effect on nut size and weight at this time. 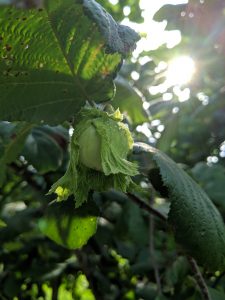 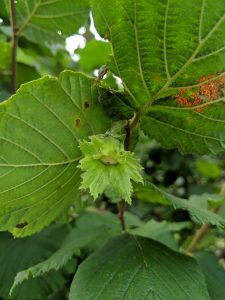 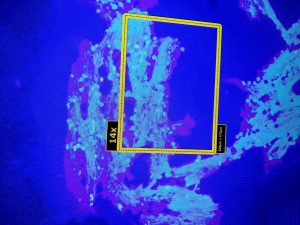 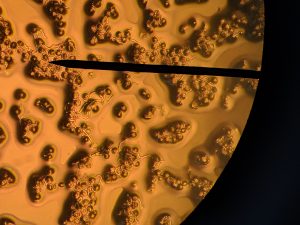 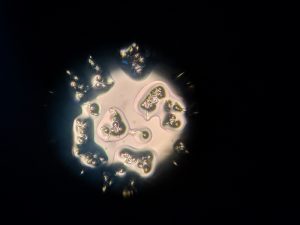 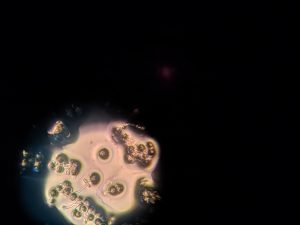 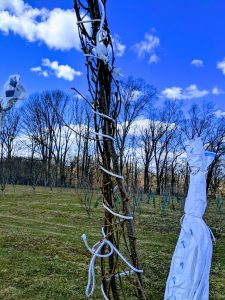 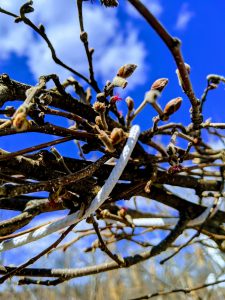 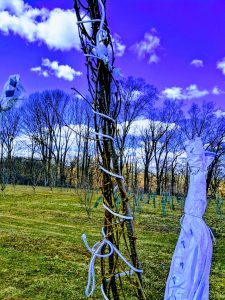 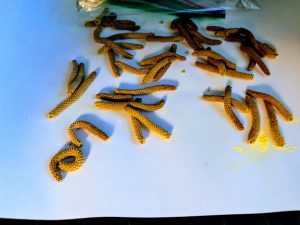 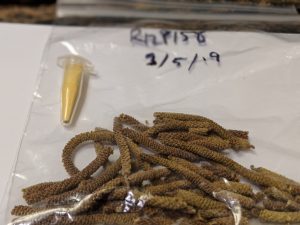 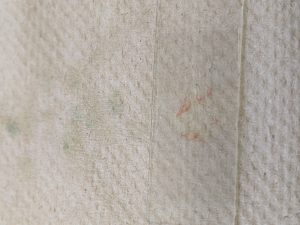 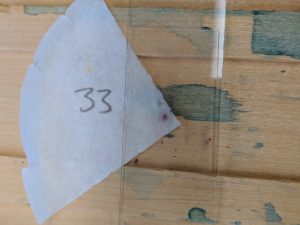 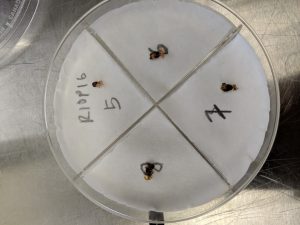 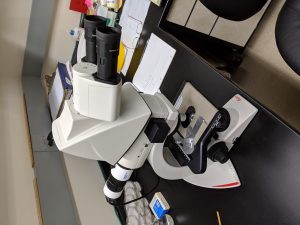 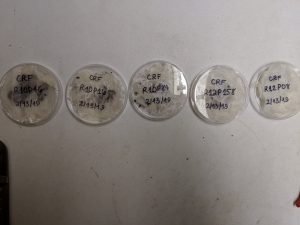 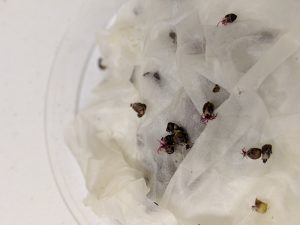 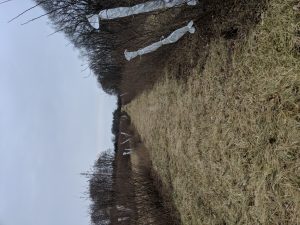 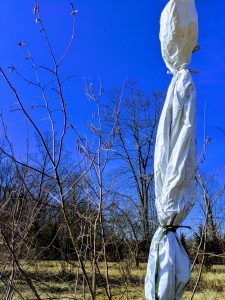 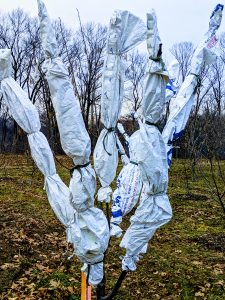 1 Webinars / talks / presentations
Return to Project Overview
Any opinions, findings, conclusions, or recommendations expressed in this publication are those of the author(s) and do not necessarily reflect the view of the U.S. Department of Agriculture or SARE.