The purpose of this project is to investigate the effectiveness of a parasitoid tachinid fly (Celatoria setosa) at controlling populations of striped cucumber beetle (Acalymma vittatum). Striped cucumber beetle is still a serious agricultural pest of cucurbit crops and pesticides still remain the most effective strategy to manage striped cucumber beetle populations [1]. Organic growers face this additional hurdle since they cannot rely on chemical insecticides. Controlling populations of A. vittatum is also important because these pests often vector a highly destructive plant pathogen (Erwinia tracheiphila), the cause of bacterial wilt in cucurbits, which can ruin an entire production [1].

Biological control is an option in pest management for both conventional and organic growers in which the use of or enhancement by a natural enemy is used to reduce pest populations. A. vittatum has many natural enemies including fungi, bacteria, nematodes, and various arthropods [2], however, the tachinid fly species (Celatoria setosa) is a highly specialized predator capable of parasitism rates of 40% or greater [3]. However, it remains unclear how the behavior of A. vittatum changes in response to parasitism or the presence of a natural enemy given their ecological relationship with their host plant. For instance, A. vittatum is a specialist of cucurbit crops and is highly attracted to and stimulated by the toxic chemical defense compounds, known as cucurbitacins, produced in the leaves and roots [4]. A. vittatum will also compulsively feed on these compounds, even as pure extracted crystals [5], and sequester them [6]. In some cases, sequestration has been shown to defend against predators [7] but the relationship to specialist parasitoids such as C. setosa is unknown.

The purpose of this project is to answer two key questions. One, how effective is C. setosa at controlling striped cucumber beetles by reducing both populations and damage? Two, do cucurbitacins play a role in the relationship between C. setosa and A. vittatum. Parasitoids are different than predators in that there is a delay in the time of death for a host. It is also possible that C. setosa might prefer non-toxic hosts or perform better in hosts with less sequestered defenses. A. vittatum beetles can also continue to feed and may be able to even mate and reproduce after parasitism which adds further ambiguity to the effectiveness of parasitoids. This project will investigate both the effectiveness of C. setosa at controlling A. vittatum populations and the net fitness in a cucurbit model. We hypothesize that C. setosa will prefer and perform better on A. vittatum hosts with low levels of cucurbitacins. We also hypothesize that parasitized A. vittatum will feed more heavily compared to non-parasitized A. vittatum. We predict that C. sativus plants with more damage will have lower fitness than C. sativus plants with less damage.

This inquiry will also advance our knowledge in sustainable agriculture discovering new pest management strategies that do not rely on chemical insecticides.

Adult Acalymma vittatum beetles and adult Celatoria setosa flies will be collected from Fellenz Family Farms throughout the growing seasons of 2021-2023 to continually maintain laboratory populations. Cages are stored in temperature and humidity-controlled biological chambers on a 12:12 light-dark cycle. Beetles and flies will be reared separately in large insect cages supplied with squash slices, 5% honey-water solution, and squash flowers daily. Beetle cages contain plastic dishes of moistened black gauze as a soil mimic. Females oviposit eggs into the gauze which is then removed daily with a mesh sieve and transported to C. sativus seedling contains for larval and pupal rearing. Eclosed beetle adults are reintroduced into larger colonies. Fly pupa are collected from deceased wilt caught A. vittatum beetles, placed on moist cotton, and removed from light until eclosion. Newly eclosed flies are also reintroduced to adult populations. Additionally, fly cages will be supplied with freshly caught beetles weekly as hosts to oviposit their larvae.  Preliminary work during the 2020 field season has demonstrated the viability of this method for rearing and maintaining experimental colonies. For example, in the previous field season over 1000 A. vittatum adult beetles successfully reared multiple generations. In addition, he also collected over 100 C. setosa adults and developed a successful rearing protocol for at least one generation with subsequent parasitism. [Note: Few researchers have succeeded in mating C. setosa under laboratory conditions [3], [11]]

Each week, analytical instruments for HPLC-Q-TOF will be maintained and calibrated to ensure constant functionality. Bulk chemical compounds, reagents, and materials will be ordered in advance as early as August 2021 and stored until needed. Beginning in May 2022, cucurbitacin B, C, D, and E standards will be prepared and analyzed using HPLC-Q-TOF technique to generate a standard curve and obtain retention times of compounds. Although cucurbitacin C is the primary cucurbitacin in C. sativus, trace amounts of cucurbitacin B can still be present and the ability to discriminate between the two defense compounds will be important. From preliminary data from 2021 cucurbitacin D and E are more common compounds found in wild A. vittatum populations. These curves and retention times will be used to identify and quantify unknown amounts of cucurbitacins in samples. The mobile phase used consists of a 70:30 gradient of acetonitrile and water buffered with glacial acetic acid at 0.01%. For processing beetle samples, individual beetles will be homogenized in 0.25mL of methanol, centrifuged for 10 minutes at 10,000 RPM, and then transferred into push-filter vials and stored at -20 degrees celsius until needed.

Marketmore 76 and Marketmore 80 C. sativus will be routinely planted in greenhouse facilities at Cornell University. The 76 variety contains cucurbitacin C while 80 variety does not. These varieties allow to manipulate the presence and absence of cucurbitacins. Plants will be sprouted in seedling trays, transplanted at two weeks old, and maintained until four to six-week-old seedings.

[1] Experiment One | Efficacy and preferences of C. setosa on potential hosts - June 2022

To test our hypotheses we will use a simply no-choice assay, Six wild-caught A. vittatum adult beetles (3 males and 3 females) will be placed inside a mesh cage with either a single wild-caught C. setosa female, a non-gravid lab-reared C. setosa female, a cage with no fly, and with a 4-6 week old C. sativus plant (see visual representation below). Cages will be supplied with fresh squash slices, cotton moistened with 5% honey-water solution. My independent variables fly presence (+/-) while my dependent variables are the number of parasitized beetles, leaf area lost by A. vittatum feeding (cm2), change in A. vittatum mass after feeding assay (g), the number of beetle egg clutches, and mols of cucurbitacin sequestered in adult beetles. After 72 hours flies will be removed and a petri dish of dampened black gauze will be added. The black gauze is a soil mimic for beetles to oviposit eggs. Adding the oviposition site after the removal of the parasitoid will allow us to measure the fecundity of beetles that are parasitized compared to beetles in the presence of a parasitoid. After 24 more hours, beetles will then be removed from the cage. Beetles will be sexed, weighed, and processed for both parasitism and cucurbitacin analysis. The most damaged leaf will also be selected to assess herbivory damage. Using HPLC-Q-TOF technique, 5µL aliquots of beetle supernatants will be analyzed to detect and quantify mols of cucurbitacin C sequestered. This trial will be repeated twice a week for four to six weeks beginning in June of 2022 and ending in July 2022.

Visual representation of no-choice assays used for experiment two to measure both A. vittatum and C. setosa performance.

In experiment two I will measure the performance of C. setosa and its offspring by assigning them lab-reared A. vittatum host reared on either high or low cucurbitacin (cuc) diets. The purpose of this experiment is to determine if C. setosa display preference for chemically and un-chemically defended hosts and if these preferences affect their performance or the survival of their offspring. We hypothesize that C. setosa will prefer and will perform better on non-chemically-defended host beetles. Two test these hypotheses, we have broken down our experiment into two trials.

For trial one, I will conduct choice tests between chemically and un-chemically defended hosts. A population of or lab-reared A. vittatum will be assigned to either a high cucurbitacin diet treatment (Marketmore 76) or a low cucurbitacin diet (Marketmore 80) treatment. Diets will consist of fresh squash slices, cotton moistened with 5% honey water solution, and 100 grams of fresh C. sativus diet-specific cotyledons daily for two days. In a small arena, one beetle for each treatment will be selected, marked with a dot of paint, and placed inside. A wild-caught female C. setosa will then be loaded into the arena and left for 24 hours. After that time, beetles will be removed and dissected to determine which treatment was preferred.

For trial two, I will conduct no-choice tests using beetles from the above-described diet treatments. Flies will be presented to either a host from a high or low cuc diet treatment in a small plastic cup and left to parasitize the beetle for a full 24 hours. Following the end of the time period, flies will be removed and beetles will be supplied with fresh squash slices and cotton moistened with 5% honey-water solution daily for two weeks or until a C. setosa pupa emerges. The pupa will then be transferred to ELISA plates to await eclosure.

Originally we had submitted a proposal to test two major hypotheses: 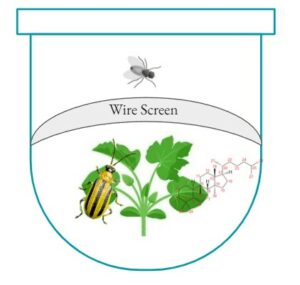 Second, using these new experimental designs we also learn the presence of C. setosa may not be enough stimulus to induce a change in herbivory and might require more direct interaction. For example, using a Wilcox test to compare leaf area removed with and without the presence of C. setosa we found no differences (N = 73, W = 430, p-value = 0.5198) Since both treatments consumed leaf tissue, we can interpret that striped cucumber beetle do not respond the presence alone of C. setosa and that perhaps there is another more important stimulus required (Figure below). 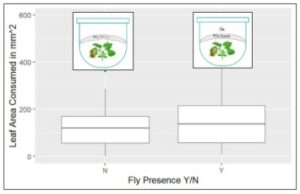 Similarly, when we compare our four treatments we also find that the presence or absence of our chemical defense compound is not mediating the interaction either (Kruskal-Wallis chi-squared = 3.5547, N = 73, df = 3, p-value = 0.3137) From these results of these pretests we cannot support our original hypotheses and drawing initial conclusions about the efficacy of C. setosa as a natural enemy are unclear (see image below). 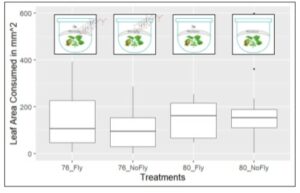 To better understand the relationship of C. setosa and A. vittatum and the role cucurbitacin may play we have revised our experiments, hypotheses, and objectives in an updated submission. We hope to return with more insightful results and conclusions.

The outreach plan for this proposal is simple but direct and effective. By October 2023, the results of this project will be summarized and electronically distributed to cucurbit growers across New York State, in addition to being presented at ESA 2023 post-fellowship. New York State growers will be accessed using the NOFA-NY database [12].