The use of pesticides is generally used for pest and disease management but the development of pest’s resistance and the adverse effect on non-target organisms are major concerns. We evaluated the effect of the antagonistic African marigold (Tagetes erecta) and a variety of cowpea (Vigna unguiculata) used as cover crops and companion plants, together with a bacterial bio-control agent Pasteuria penetrans against silverleaf whiteflies (Bemisia tabaci), aphids (Aphis spp.) and root-knot nematodes (Meloidogyne javanica) in squash production. Refugia were attractive to multiple beneficial species. Orius spp. was abundant in marigold flowers, whereas cowpeas harbored high numbers of aphids that can become a reservoir for secondary infestations. Unlike African marigolds, the use of cowpeas intercropped with squash was not identified as viable strategy for squash pest management.

The overall goal of this project was to evaluate the potential of African marigolds and cowpeas as cover crops and companion plants for management of silverleaf whiteflies, aphids, and thrips, and its effect on viral incidence in organic zucchini squash.

Study site. Two year-cycles of experiments were conducted in 2016 and 2017 at the University of Florida’s Plant Science Research and Education Unit (PSREU) in Citra, FL, where the soil is known to be infested with M. javanica. Open-field plots were used for the experiments located in a 35-m wide × 52-m long (0.24 ha) area.

Plant culture. The squash ‘Cash Flow’ (Seedway LLC, Lakeland, FL) was used as cash crop for the experiments. The African marigolds ‘Crackerjack’ (Stokes Seeds, Buffalo, NY) and ‘Mississippi Silver’ cowpeas (Urban Farmer, Westfield, IN), a variety resistant to M. javanica, were used as cover crops and companion plants. Fifty percent of the squash seeds used per trial were Pasteuria-coated seeds. Companion plants were grown from seeds in the field 2-3 weeks before planting the squash. Cover crops were grown for four weeks and then plowed into the soil one week before planting the squash.

Nematode density was determined by collecting soil samples prior to planting the cover crops, before planting companion plants, and at squash termination using the sugar-flotation technique. The Reproductive Factor (RF) of M. javanica in the soil was measured from five replicates of 100 cc per treatment.

A total of 124 insect morphospecies from 64 families in the orders Coleoptera, Diptera, Hemiptera, Hymenoptera, Lepidoptera, Odonata, Orthoptera, and Thysanoptera, were collected from the experimental area. Parasitoids accounted for 34% (40) of the species, predators 20% (25), and plant feeders accounted for 35% (43) of the species, but only six were pests of concern in zucchini squash crops including cowpea aphids (A. craccivora), silverleaf whiteflies (B. tabaci), and thrips (Florida flower thrips, Frankliniella bispinosa Morgan; common blossom thrips, F. schultzei Tribom; tobacco thrips, F. fusca Hinds, Thysanoptera: Thripidae), and melonworms (D. hyalinata).

Insect pest species. For both spring and fall seasons, no significant differences in the numbers of silverleaf whiteflies (P= 0.609 and P= 0.969) and cowpea aphids (P= 0.557 and P= 0.409) were observed among treatments. Higher numbers of silverleaf whiteflies (3 per leaf disc) were observed during the fall season compared to the spring season (< 0.5 per leaf disc). The same numbers of aphids were recorded during the spring and the fall season (1.7 per pan trap).

The applications of Entrust® on positive control treatments (twice during each season) had no apparent effect on the silverleaf whitefly and cowpea aphid populations attacking the squash. Moreover, cowpeas were attractive to aphids during the spring season as well hosting high numbers per plant (>25 per plant).

During the spring season, significant differences in the number of thrips were found in the squash (P= 0.014) and in the flowers of the African marigolds (P= 0.013). The highest numbers of thrips (8 per leaf) were found on the squash planted next to the cowpeas. However, when scouting the companion plants, higher numbers of thrips (8 per flower) were observed in the flowers of the marigolds compared to the rest of the treatments. Few thrips were observed during the fall season.

Significant differences in the numbers of melonworms were observed among treatments during the fall season (P= <0.0003). The highest numbers (3 per plant) were observed in the treatment with cowpeas used as companion plants and the lowest numbers (2 per plant) in treatments with African marigolds used as companion plants. Melonworms established two weeks after planting and two spaced applications of Dipel® (Valent BioSciences LLC, Libertyville, IL) helped to minimize their damage. Low numbers of melonworms were recorded only one week before termination of the spring season.

Predator and parasitoid species. Cowpeas harbored predatory species, especially adult and immature stages of coccinellids and carabid beetles. Mean numbers of immature lady beetles (4.5 per plant) and adult lady beetles (3.25 per plant) recorded in the companion plants were significantly higher in the cowpeas (P= 0.021 and P= 0.014. respectively) compared with marigolds and the mixed treatments (African marigolds mixed with cowpeas).

Contrary to cowpeas, marigolds hosted mainly adults and immature stages of Orius species commonly known as minute pirate bugs. Significant differences in the numbers of Orius spp. recorded in the companion plants were identified among treatments (P= 0.0005), being highest on the mixed treatments (9 per plant), followed by treatments with African marigolds only (6.5 per plant).

Viral incidence. DAS-ELISA showed negative results for all four aphid-transmitted viruses. Reports potyviruses established in the experimental station have been negative for a few years now; however, the constant presence of various aphid species in the squash and other crops in the area requires constant monitoring to avoid sudden disease infestations.

CuLCrV symptoms were observed in only seven plants on the entire experimental field. PCR conducted to confirm its presence showed that the whitefly-transmitted virus was present in 83% (32) of the samples (n = 40) including samples collected from the positive and negative control plots. Asymptomatic squash plants are commonly found in the field considering that CuLCrV symptoms start to develop approximately three weeks after being infected.

Objective 2. Assess the effects of African marigolds and cowpeas used as cover crops and companion plants together with P. penetrans for management of M. javanica in zucchini squash production.

Nematode management and Pasteuria. Results showed no significant differences in the Reproductive Factor (RF) of M. javanica between treated and untreated squash seeds. Nevertheless, there was a significantly lower nematode RF in the treatments containing cowpea and the mixed treatments compared to the treatment with marigolds used as cover crop and companion plant (P< 0.05). While the positive and negative control treatments showed a 2-fold increment in the numbers of M. javanica, the RF was less than 1 for all treatments. This indicates that overall companion plant treatment combinations were not effective hosts for M. javanica.

The resistance to Meloidogyne nematodes of the cowpea variety ‘Mississippi Silver’ used during the experiments may explain the lower numbers of M. javanica in treatments containing cowpeas compared to the controls. The allellophatic effect of the marigold root exudates onto the nematodes seemed to affect only their RF and not M. javanica numbers.

Objective 3. Determine the effects of African marigolds and cowpeas used as cover crops and companion plants on the soil suppressiveness of M. javanica induced by P. penetrans and the bacteria resilience after cover crop/zucchini squash rotations.

The effectiveness of P. penetrates endospores had a high variability among treatments. This is because there was a natural population of the bacteria scattered in random patches throughout the experimental field. Additionally, the developmental stages of Pasteuria seemed to be in reproduction phase I (attachment and germination) or II (exponential growth) that explain an increased infestation capacity in these random patches. 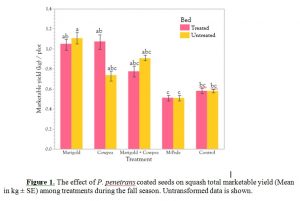 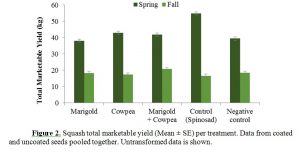 Objective 4. Develop and provide educational materials on cultural and biological management of key insect pests and M. javanica attacking zucchini squash as a component of an outreach plan.

We aimed to generate a cost-effective pest management program available to farmers against insect pests and M. javanica populations in squash production. At least 600 cucurbit growers in Florida can be impacted by our project, including around 200 squash farmers and an additional 400 growers who produce other types of cucurbits (USDA 2014). We reached farmers and researchers from other states and other countries by presenting part of our results at the 2016 International Congress of Entomology (ICE; Orlando, FL) and the 2017 Entomological Society of America Meeting (ESA; Denver, CO). We will aim to reach additional growers from Florida and other states by presenting our final results at the 2018 Our Farms, Our Future Conference (St. Louis, MI).

The present study is part of a PhD dissertation that will compile all results and analysis by the end of 2018. Our findings will be published as an electronic (EDIS) article and in newsletters such as the Berry/Vegetable Times and Florida State Horticultural Newsletter. Experimental results will also be published in peer-reviewed journals.

2 Grants received that built upon this project
Project outcomes:

Refugia increased natural enemies but only in selected plots. When African marigolds were present, movement of the natural enemy populations towards the squash was observed. Populations of minute pirate bugs (Orius spp.) were the most commonly found in the squash plants followed by adult lady beetles. Orius spp. seemed to be related with the numbers of thrips found in the marigolds; however, the numbers of thrips did not increase in the squash planted next to the African marigolds.

Despite being attractive to multiple predatory species, cowpeas harbored high numbers of aphids that can become a reservoir for secondary infestation, fungal and viral diseases. Thus, the use of cowpeas intercropped with squash under these conditions was not identified as a viable strategy for squash pest management.

The increased numbers of natural enemies and the applications of Entrust in the positive controls had no apparent effect on CuLCrV incidence. This is consistent with the lack of significant differences in the numbers of silverleaf whiteflies found in the squash across treatments.

The benefits of using marigolds as cover crops and companion plants include the increase in natural populations of beneficial arthropods in the field. This will help the farmers to reduce pest population build up in the squash and thus minimize the use of insecticides. The farmers will be able to maintain a sustainable crop production for a long period of time with less input costs and the exposure of farmers to toxic chemicals will be minimized. Moreover, flowers from marigolds can generate income for the grower.

In addition, the suppressive effect of the bacterial bio-control agent Pasteuria penetrans and marigold root exudates can reduce the need for nematicides for M. javanica (Hooks et al. 2010, Hewlett et al. 2014). These changes in the cropping system can be translated into lower costs of production, higher production quality, and higher profit for growers.

Approximated 25 cucurbit farmers were reached during our outreach activities. The combination of these techniques can be implemented not only by squash growers but also by other cucurbit producers in Florida and the rest of the southern U.S. including southern states (e.g., Georgia) and western states (e.g., California) that are attacked by similar insect and nematode pests. Pests’ infestations in cucurbits including watermelons, cucumber, and cantaloupe crops, in these regions, can be managed using the combined strategies implemented in this project.